The mobile and desktop music worlds have been frustratingly disconnected for too long. Hollin Jones discovers all that is about to change with Music IO…    Details Price £7.99 Contact Via website Web www.musicioapp.com System Requirements iOS 7 Mac OS X 10.7 For all the ways in which iOS has become a very capable and […] 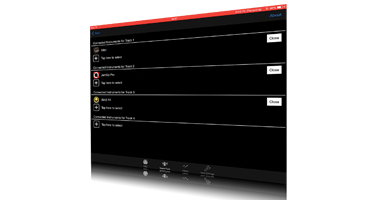 The mobile and desktop music worlds have been frustratingly disconnected for too long. Hollin Jones discovers all that is about to change with Music IO… 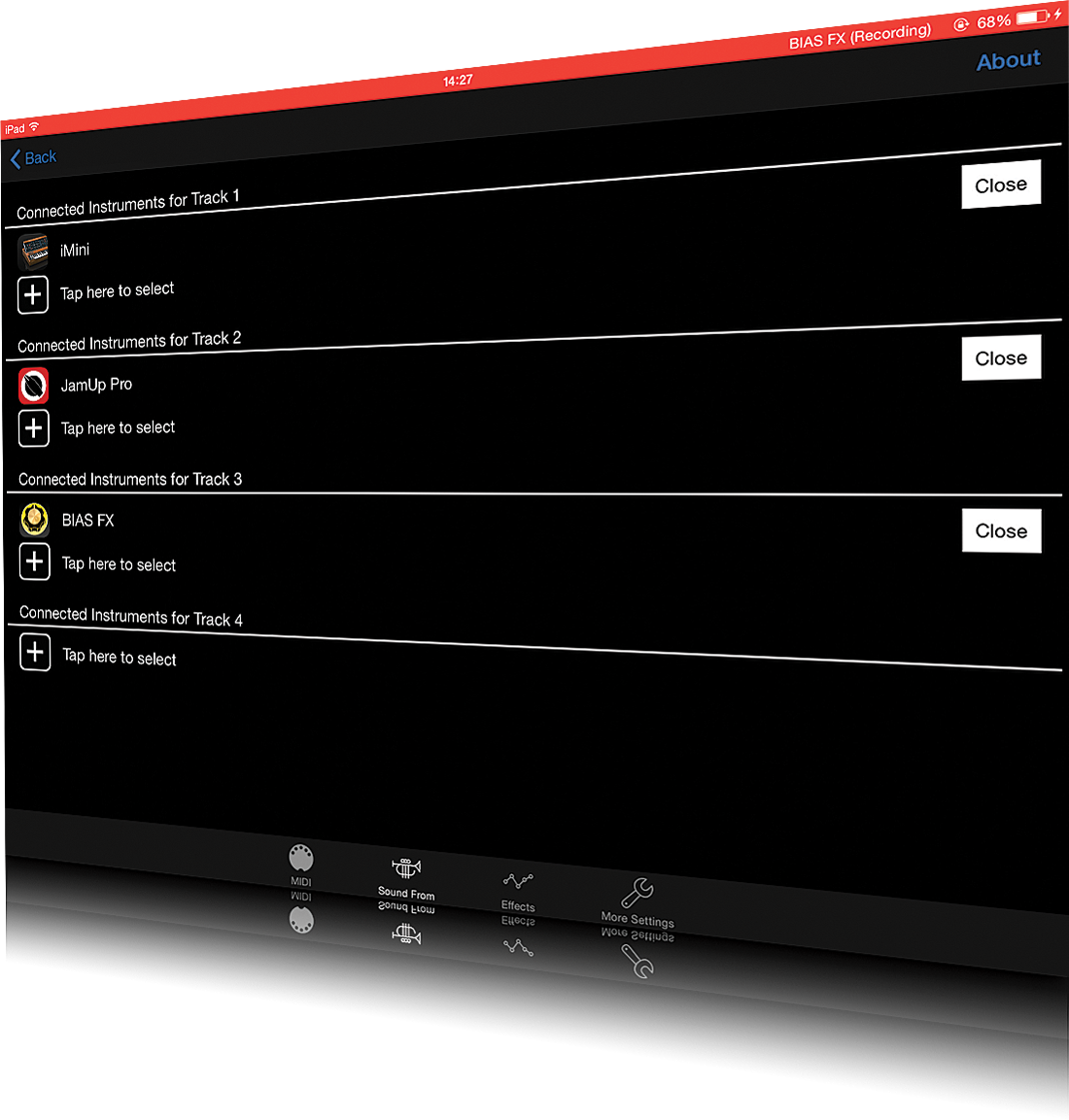 For all the ways in which iOS has become a very capable and competent platform for making music with the many advanced apps and processors that now exist on it, there’s still a gulf between the mobile and desktop worlds when it comes to continuity of workflow.

Put simply, meshing the two platforms together for music is fiddly at best, involving either swapping project files via the cloud or iTunes’ file sharing section, or essentially sampling audio from one device to another. Neither is particularly satisfactory in 2015.

Enter Music IO, a simple but potentially revolutionary new concept that aims to address this problem. Not everyone wants to buy an iPad dock: as good as they are, it’s extra expense and you probably already own an audio and MIDI interface for your computer anyway. Music IO is a three-part system that allows you to send audio and MIDI back and forth between your Mac (Windows support is coming) and your iPad, iPhone or iPod Touch. It does all this using your standard USB charging cable, so no extra hardware is required.

Your Serve
The first part of the system is a lightweight server app that runs on your Mac and acts as a gateway for the two devices to communicate. There are also special VST and AU plug-ins (one of each format) that are inserted into audio tracks in your DAW to enable the flow of audio back and forth.

On the iOS device, an app uses Inter-App Audio, CoreAudio and CoreMIDI to act as a hub for compatible instruments, DAWs and effects processors. The idea is that everything becomes linked, so you can play your iOS synth from a MIDI keyboard attached to your Mac and record the audio straight back into the Mac at the same time.

Alternatively, you can send an audio track out from your Mac’s DAW to be processed by a guitar module on your iPad and, again, record it back to the Mac. This all happens down a single Lightning or 30-pin Dock connector cable. 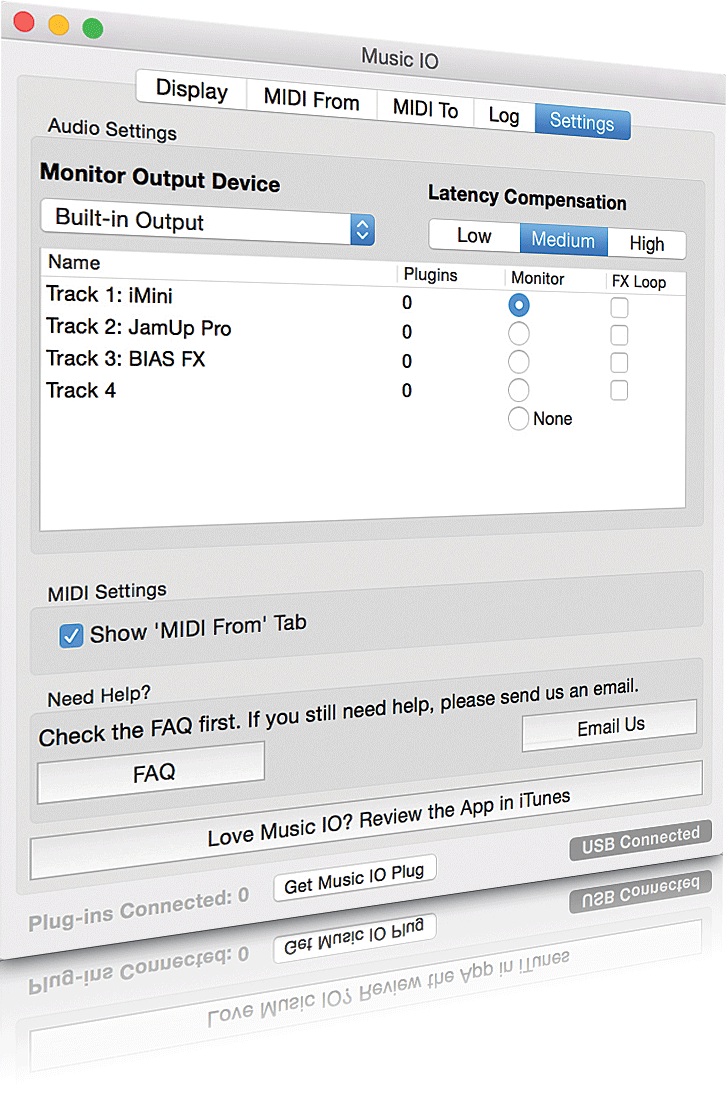 The potential uses of such a system are clear to see. You’ve been able to incorporate external music hardware into a DAW fairly easily for some years, but iOS devices’ limited native port offerings have always meant buying a special adaptor or iOS-compatible interface – until now.

In practice, it works very well. Your IAA-compatible apps appear inside the iOS app, and you can load up to four instruments per instance of the plug-in. Sound is transmitted in 32-bit stereo back and forth, and tapping on an app on the iPad will open it and enable you to use its controls, while sound continues to be transmitted in the background.

In Practice
To record in your DAW, you need to insert the plug-in onto an audio track then set its output to a group or bus channel. Then, you create a second audio track with its input set to that group or bus, and the plug-in funnels sound from the input of one channel out to the other. This is ever so slightly long-winded – it would be ideal to be able to do it on a single track – but it’s far from being a deal breaker.

You manage monitoring using the Mac server app and, also, latency compensation both here and in the iOS app. I found it was possible to achieve latency so low it was basically non-existent, although it felt like this was related, to an extent, to the specific iOS app in use.

Some apps exhibited a little more latency and some a little less, though none were particularly problematic. Music IO also sends MIDI back and forth, and once connected, the iOS device appears as a source and destination to your system.

This is even easier than audio since MIDI just flows between the two and, as noted, you can use your Mac and any hardware connected to it to trigger the iOS instruments, so no extra interfaces are required. Again, latency is extremely low, which is not surprising since MIDI needs far less bandwidth than audio to stream across a connection.

Music IO is a clever solution to a problem in the music technology world: how to literally bring your iOS instruments and effects into your desktop DAW setup. This, it manages commendably and without any extra cables or accessories. There are a few elements that could be smoother and more refined, but development seems to be constant and the list of upcoming features on the website – connecting multiple iOS devices, sample rate conversion – suggests great things ahead for this software. If you’re looking for a way to unify your iOS and OS X music platforms, this is the best solution around. 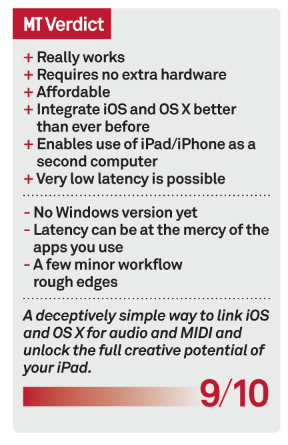