The Andy Munro-designed Egg monitoring system is now built in the UK, Mike Hillier cracks the case… Details Price  £1999 Contact Sonic Distribution 0845 500 2500 Web www.munrosonic.com Superficially, the new Munro Sonic Egg 150 Monitoring System, although now manufactured in Britain, is much the same as the old sE Munro system of the same […] 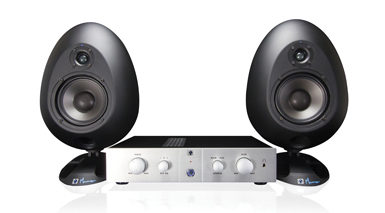 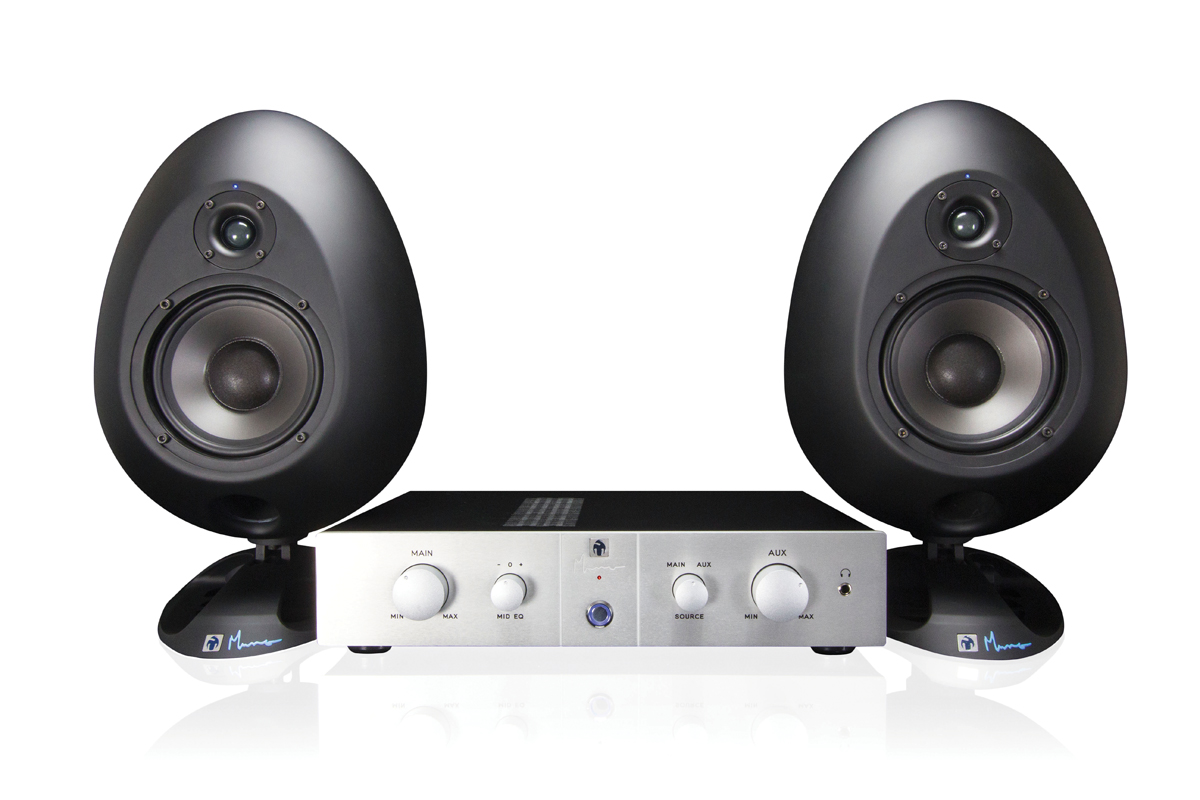 y, the new Munro Sonic Egg 150 Monitoring System, although now manufactured in Britain, is much the same as the old sE Munro system of the same name. The egg-shaped speakers are the same design, and the same materials.

Even the drivers themselves are the same model, although it’s now purchased through Germany where an extra layer of quality-control should ensure less variability between models. In fact the only real change to the speakers themselves is the logo on the front and the sticker on the rear.

The system comes, as before, with its own separate dedicated power amplifier, and again this looks to be the same. The amplifier has Main and Aux channels, a headphone amp, and a midrange EQ switch. There are some minor cosmetic changes to the amp, but they only hint at the real work which has been done under the hood.

Brains Behind the Brawn
It’s inside the amp that Munro Sonic has done all of the work on this revision of the Egg system. Munro Sonic has taken advice from users and widened the midrange notch on the Hard/Soft control. While it only boosts or cuts the mids around 2kHz by +/-1.5dB, it’s now far less subtle than before, due to this extra bandwidth.

The two volume knobs now have a centre detent, which makes setting the two channels to the same level for A/Bing easy. It’s also useful for ensuring you always monitor at the same level. However, we felt that it was perhaps too loud for regular monitoring and would have preferred something a good 10-15dB lower.

On the rear of the amp, Munro Sonic has added trim pots for high- and low-filters. The low trim in particular is very useful for countering room acoustic issues.

While adding all these features Munro Sonic has also redesigned the amp circuitry itself, claiming extra punch in the low-end. And the thump when turning the amp off, which plagued users of the old model, has been eliminated. 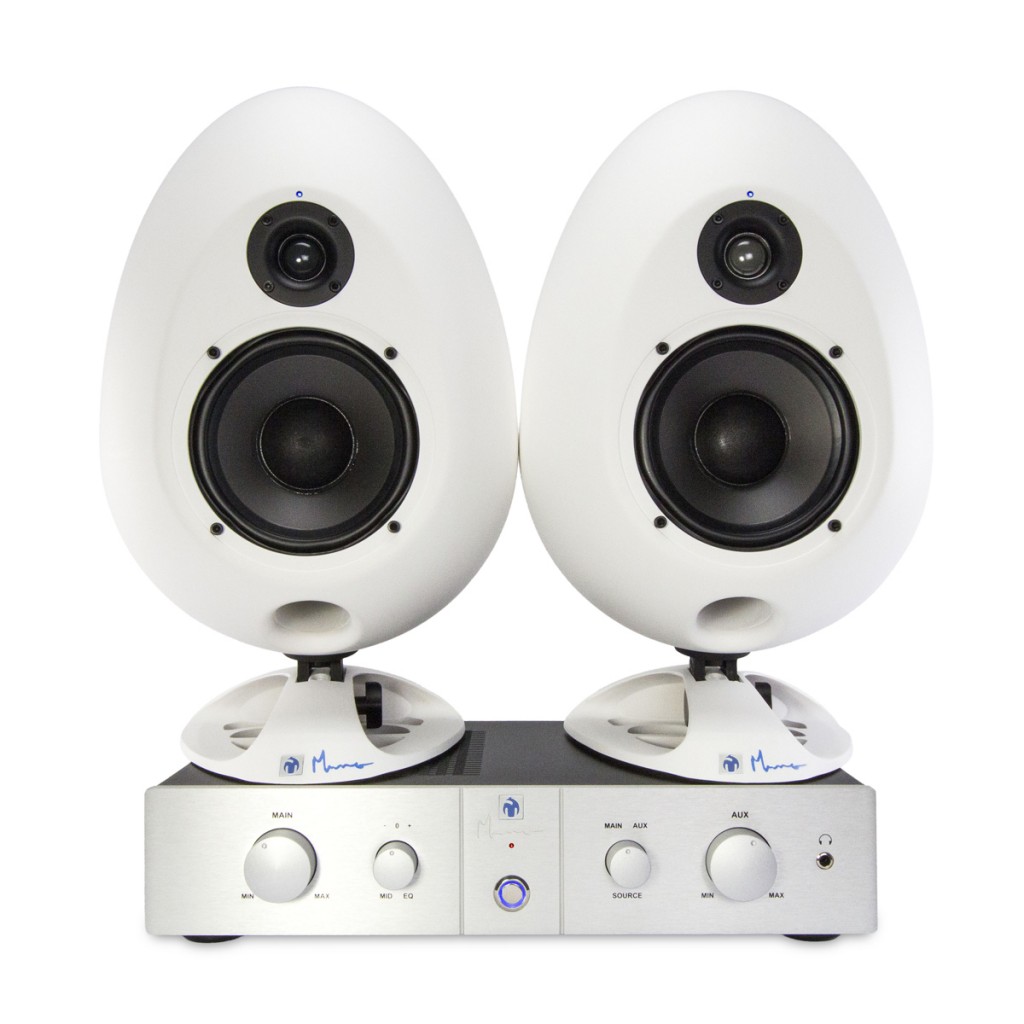 Listen Closely
We’ve had a pair of Eggs in our studio for a few years now, so we’re pretty familiar with the sound. Switching over to the new models isn’t a massive step; the overall tonality is very similar.

The low-end feels more punchy than before: it’s not as if there is any more, or that it extends further, it just seems to respond faster, which makes the bottom end sound a little more alive. This in turn leaves the low-mids sounding less strained, making it easier to make fine EQ decisions in this area.

The LED lights which aid in positioning the speakers perfectly for your mix position ensure that you’re sat absolutely in the sweet spot. This results in an exceptional sound field, with instruments really occupying specific positions in space around the studio, seemingly both in front of and behind the speakers themselves.

We found the old Mid EQ switch to be a useful tool. The Soft, hi-fi mode, which cuts the midrange, producing a subtle smile-curve, made the monitors easy to listen to for long periods when writing and coming up with musical ideas. 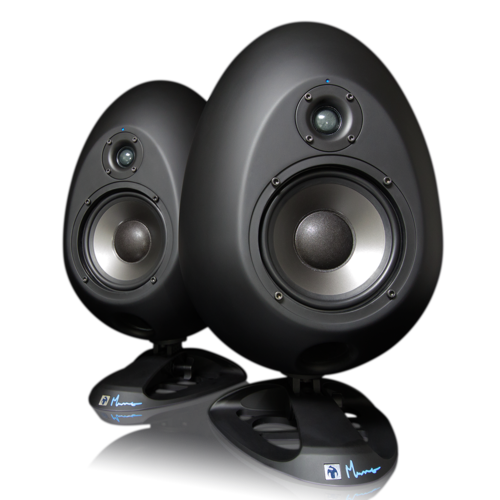 For mixing and mastering we kept the switch in its neutral position, flicking occasionally to the Hard, mid-forward mode to focus in on the interaction in the mid-frequencies between the vocals and guitars. With the newer wider curves the Eggs are easier to listen to in the Soft, hi-fi mode. For writing and producing we see this as a great benefit.

In Hard mode, more frequencies are now pushed forward, which makes it a little trickier to narrow down the problem frequencies in the 2kHz region, as the 1kHz region is also pushed. This will come down to personal preference however, and our own preference is likely to switch as we get used to the new curve.

A Good Egg
By including the midrange EQ option the Eggs are able to serve multiple purposes, making them an excellent choice for project studios who are on a budget that might not want to invest in multiple monitors, but still want a high-end solution.

Existing owners of Egg Monitoring Systems are able to upgrade to the new amp by contacting Munro Sonic directly, at a cost of £699. Munro Sonic will swap out the old amp for the new one with a full two year warranty. 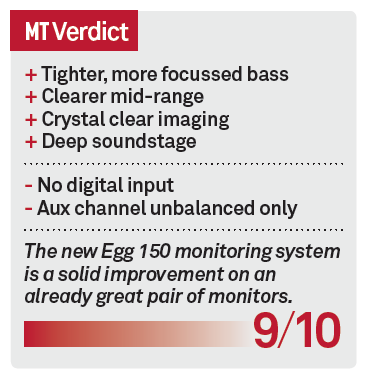