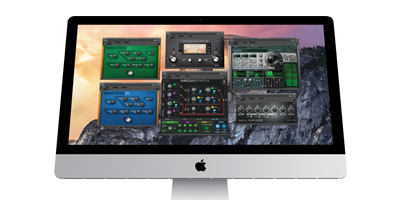 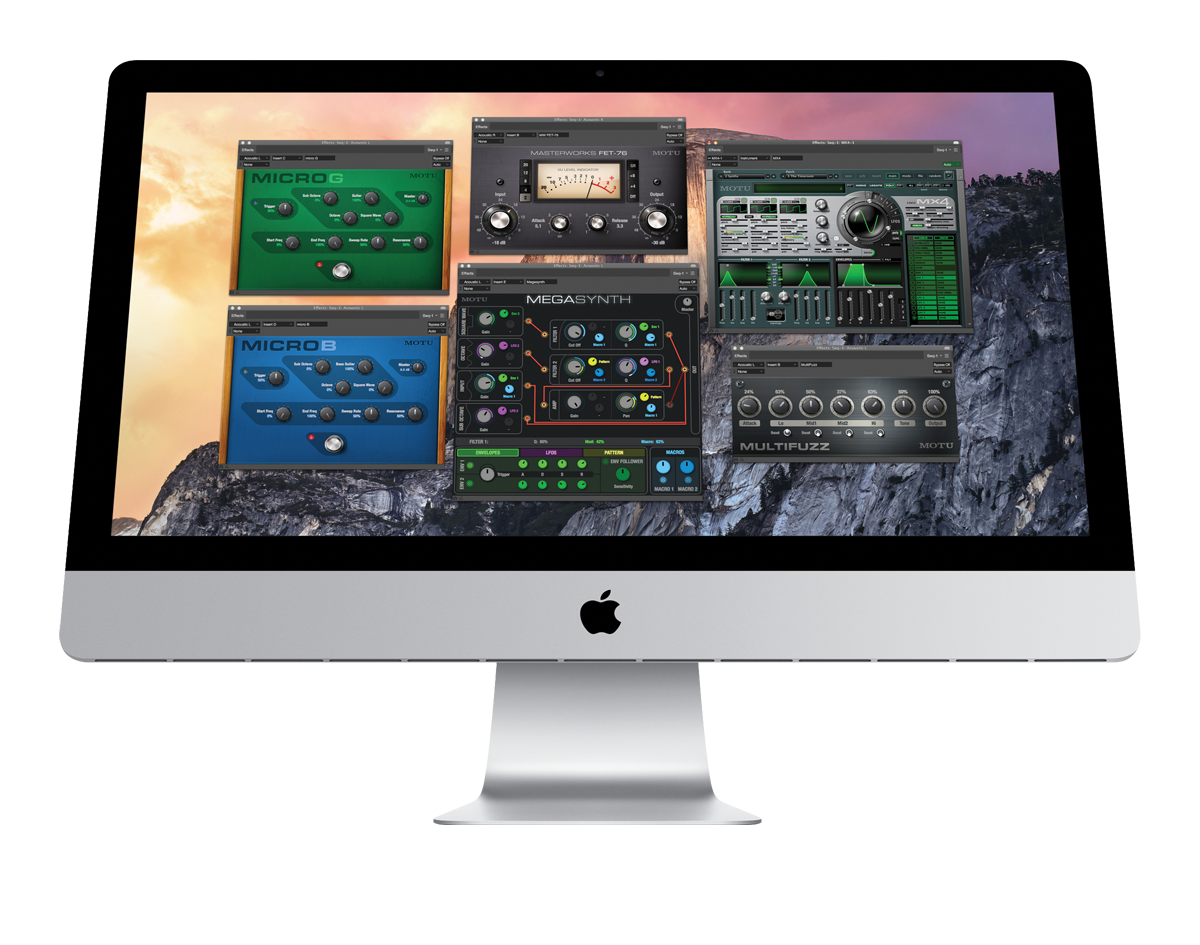 Since its inception, Digital Performer has always been a no frills product with a plain and simple interface. Like other DAWs, new features are added with each version. Unlike some DAWs, however, radical unnecessary changes to the look and feel of the software are never made and users with some of the earliest versions can confidently upgrade and continue to operate in a familiar working environment.

Even what seems initially like a brand new interface in Digital Performer 9 turns out to be just a new theme with a fashionably dark background that can be quickly changed back to the familiar light grey of old if need be. 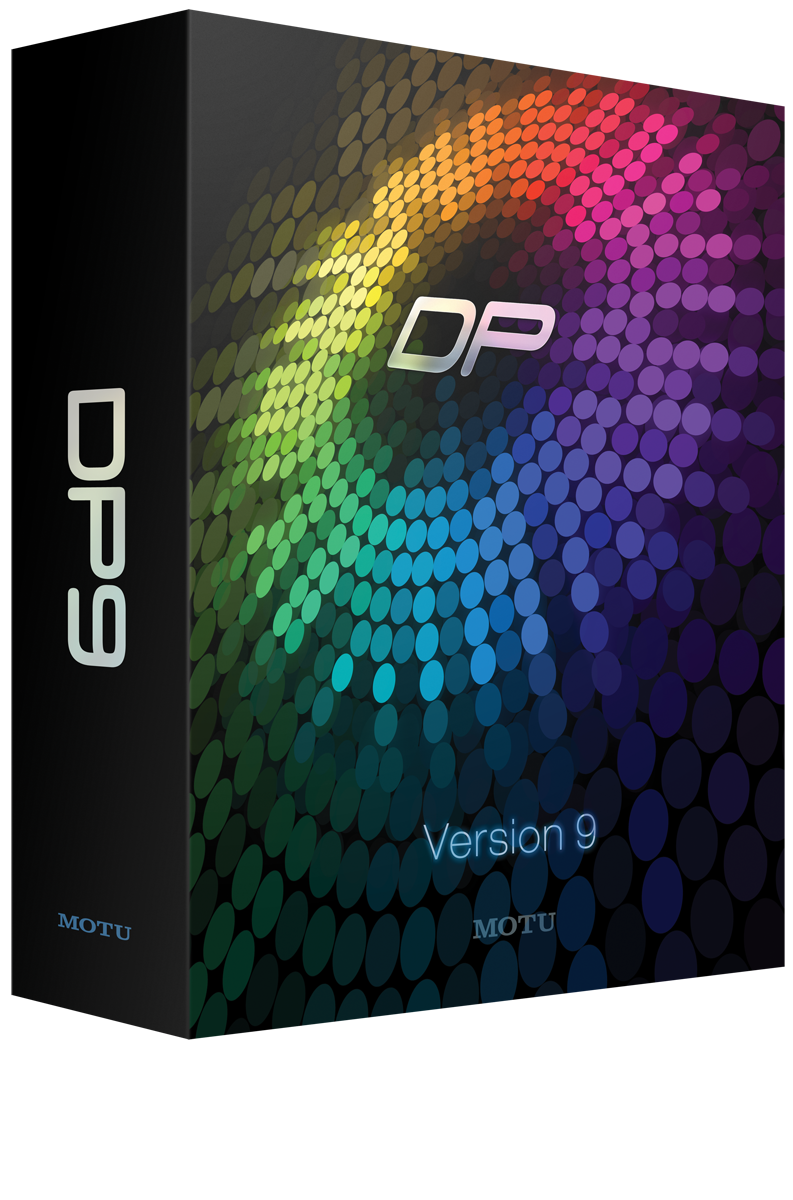 Conservative? Maybe, but Digital Performer has a fiercely loyal user base, particularly with US film composers and keeping them onboard must, surely, remain a priority. That said, MOTU appear to be out to attract new users with an emphasis on guitar plug-ins, the inclusion of virtual synths and the addition of the Windows platform that came about with Digital Performer 8.

So what’s new in Digital Performer 9? Well, for starters, there are several new plug-in processors, a new synth and many workflow enhancements.

Hey Good Looking
With so many DAWs now flourishing a fashionable dark look to their GUI it’s perhaps inevitable that Digital Performer would follow suit. Although the previous default interface was much lighter, Digital Performer has, in fact, had a large selection of themes available in the preferences section for some time. The new default look, though, is excellent, modern, stylish and at the same time remains clear and easy on the eye.

The small text has always been an issue for some but now that it’s white on a dark grey background it’s arguably, easier to read, particularly for owners of new Macs with a Retina display because Digital Performer 9 now takes full advantage of that technology.

Changing the display is easy. A trip to the preferences menu reveals an abundance of colourful themes that are useful for showing off material to clients and so on. 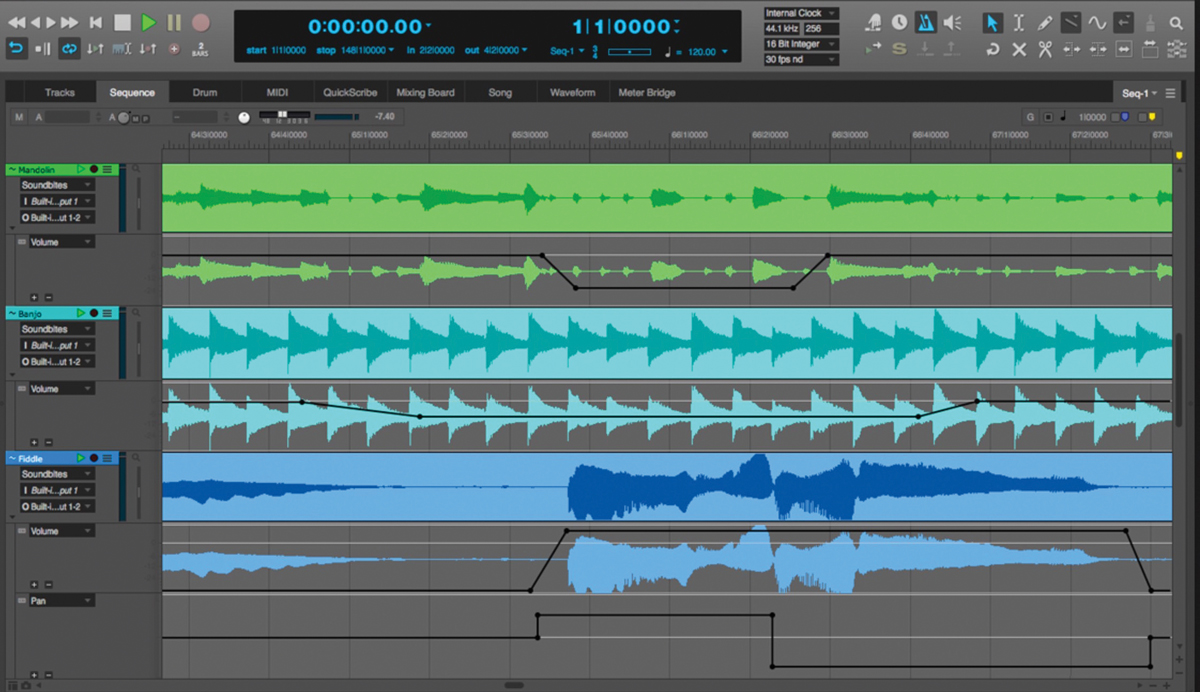 Although not a massive new feature upgrade in terms of numbers, there are several major enhancements designed to improve the general workflow and heading the list is the inclusion of a MIDI mute tool, which comes as a surprise because users have been requesting one for years without success. Quite why MOTU took so long to add such a basic and very useful tool is a mystery.

Now that it’s there it can be used correctively to temporarily mute notes in a track or, creatively, to experiment with interesting rhythmic patterns. However it’s used, it’s a very welcome new feature.

The process of adding tracks has been streamlined with a new Create Tracks command for adding many different types of tracks in one fell swoop, a group of MIDI, audio and instrument tracks, for example. Instrument tracks in Digital Performer don’t carry MIDI data as in some other DAWs. They require MIDI tracks to run them and within this new command the MIDI tracks can be automatically generated for particular instruments – a real timesaver.

Automation editing has also been improved with the data, audio or MIDI, now available in separate lanes below a track. It’s a really useful addition and brings Digital Performer in line with Cubase, which has had this feature for some time.

We can’t help thinking, though, that as a favourite DAW with film and media composers, it would be good if Digital Performer’s new multi-lanes feature displayed virtual instrument articulations linked to its score pages, à la Cubase’s Expression maps. Apparently this is a hot topic with DP programmers lately… 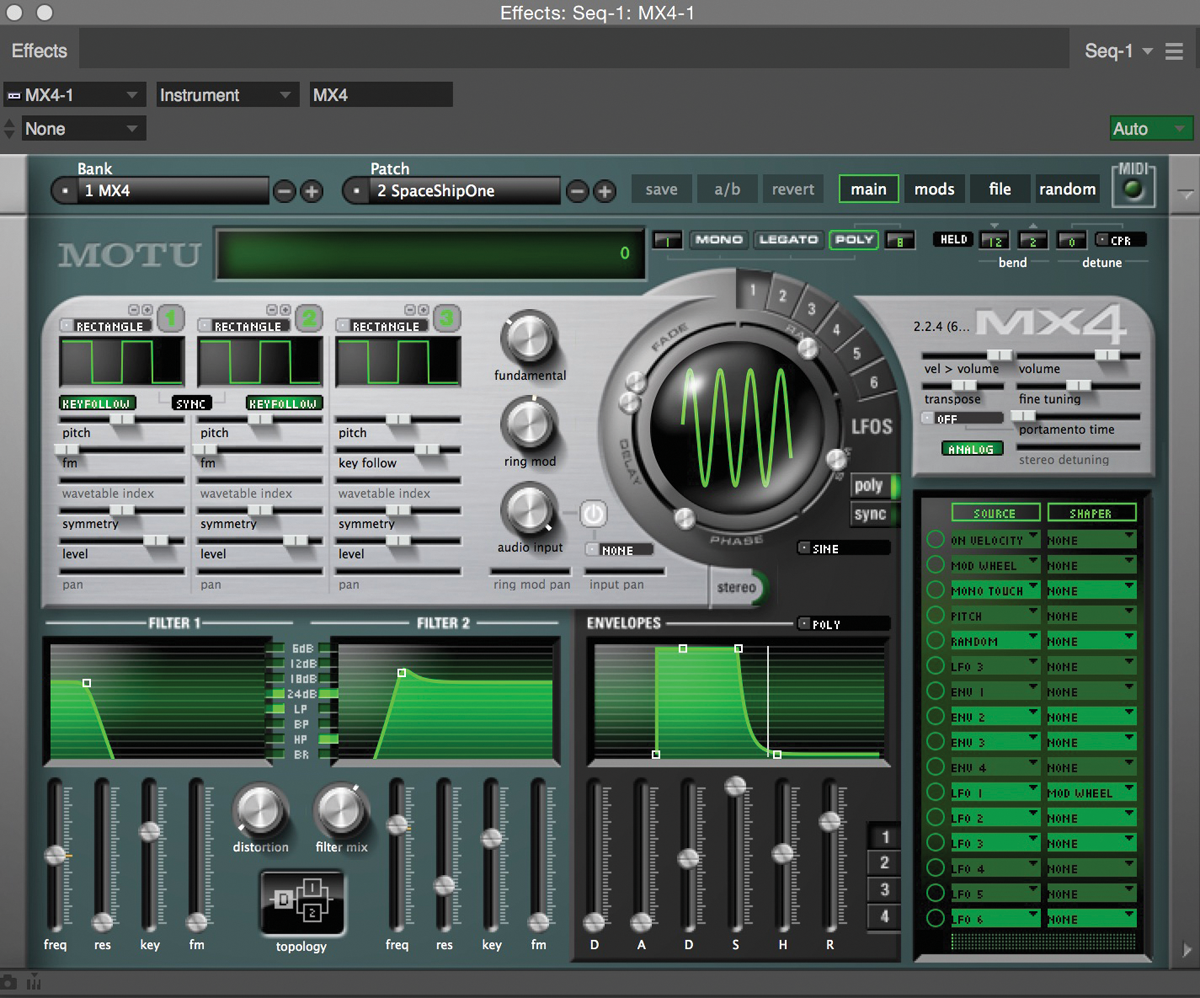 The MX4 is a hybrid synthesiser that delivers both modern and vintage sounds. It comes with 120 inspirational EDM presets from synth expert Erik Norlander

High Spec
Although relying on your ears is very important when balancing and processing audio, a visual display of the frequency content of an audio track is useful. Digital Performer’s new spectrogram display can be viewed alongside a waveform display on audio tracks. It’s an extremely colourful affair with frequency content represented vertically along the timeline and brightness indicating harmonic intensity. Various colour schemes are available.

For a long while Digital Performer has had a powerful Custom Consoles feature for generating, transforming and monitoring MIDI continuous controller data. In Digital Performer 9, Custom Consoles is now used to implement a new Learn Controller feature that enables the mapping of MIDI controller knobs, faders and switches to audio plug-in parameters and bus send knobs in the mixer. It’s a simple matter of clicking a learn button and moving a control on the MIDI controller device.

Of all the DAWs that have a music notation score, Digital Performer’s QuickScribe is the best at transcribing non-quantized MIDI data. It’s almost always accurate and a huge timesaver because there’s virtually no clean-up operation required. Now, Digital Performer 9 boasts a new MusicXML export feature, so scores can be imported into programs such as Finale and Sibelius, without losing QuickScribe’s interpretation.

Alternatives
There are a good many DAWs around these days but Logic 10 and Cubase 8 are, arguably, the main rivals to Digital Performer 9. Both, like DP9, are mature and well featured in the three key areas, MIDI, audio and scoring. Both programs have had multiple automation lanes in their main sequencing pages for a long time.

Cubase, however, also has this feature in its excellent MIDI editor while Logic and DP don’t. Both provide a decent array of instruments and plug-ins, although Logic has always excelled in this area. On the scoring front, Logic’s editor is more comprehensive. Both have MusicXML support.

With a single intuitive window it looks and sounds like a winner. As a bonus it also comes with 120 electronic dance music presets from synth expert Erik Norlander. These make great starting points for further programming. To check it out, head over to MOTU’s website for a selection of Erik’s EDM demos. The MX4 is a good all-rounder and a welcome addition to Digital Performer’s already decent synth range. But there’s more. 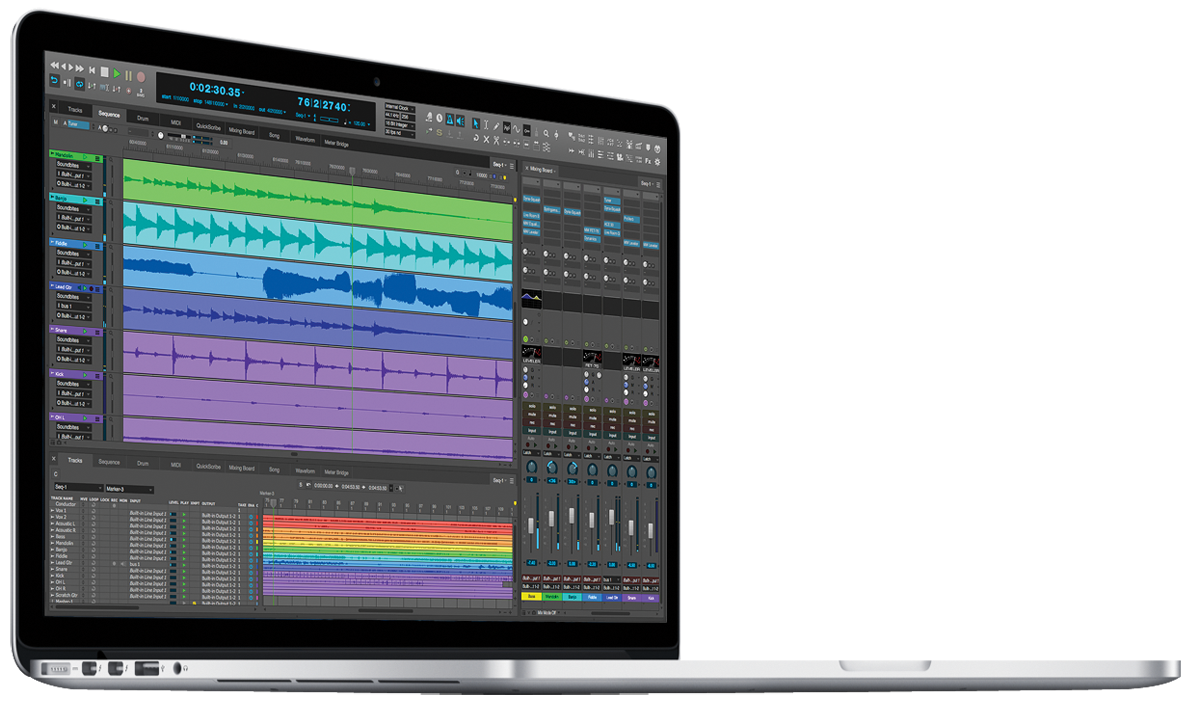 Three more subtractive synth processors have appeared, MegaSynth for guitar and bass plus MicroG and MicroB, both of which are polyphonic octave generators (POGs) for guitar and bass respectively. MegaSynth, on the other hand, is more of an all-round guitar synth with envelopes, LFOs and a pattern generator as well as a POG.

Guitarists are well catered for here because there’s yet another guitar plug-in in the form of MultiFuzz, a reproduction of Craig Anderton’s renowned QuadraFuzz, a multiband distortion kit from way back. Fans of vintage plug-ins will be pleased, too, with the inclusion of the MasterWorks FET-76, a detailed model of the 1176LN limiting amplifier introduced by UREI in 1968 that provides the exact same controls as the original for gain reduction. Other new stuff includes unlimited project text notes, a search field for markers and plug-ins.

Although not a massive update, there are many significant improvements and enhancements in Digital Performer 9, not least the new Retina support for Apple Macs, which if you have a large screen puts paid to the sometimes annoying small text used throughout the program.

The implementation of multiple lanes is very useful, too. Maybe we will see them used to provide articulation mapping in a future version. MIDI Learn will probably help with attracting new EDM producers as will the new MX4 synthesizer and the MusicXML export feature is bound to please MOTU’s longstanding army of traditional composers.

Much more widely known and appreciated in the US than the UK, where it is up there amongst the best selling DAWs, over the years Digital Performer has helped define what a DAW is today.

For example, it was the first DAW to incorporate Melodyne-style pitch manipulation. And its elegant consolidated window has been emulated by Logic and others, although none have managed to be so flexible. Since the addition of the Windows platform, DP has attracted many new users.

They certainly deserve them because, although it’s not the flashiest DAW around, it’s very powerful and with a continuing no-nonsense approach, it should attract more young blood among the ever-emerging new generation of musicians and producers. 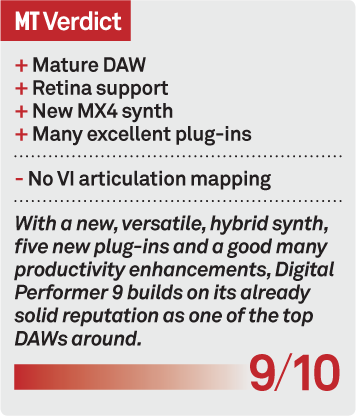