When we reviewed Mixcraft 5 two years ago, we considered it a very impressive low-cost recording package with a staggering array of features. Originally fashioned after GarageBand, its easy-to-navigate GUI and abundance of instruments and effects has attracted many musicians who were perhaps a little intimidated by the complexity of the major DAWs. Manufacturer: Acoustica […] 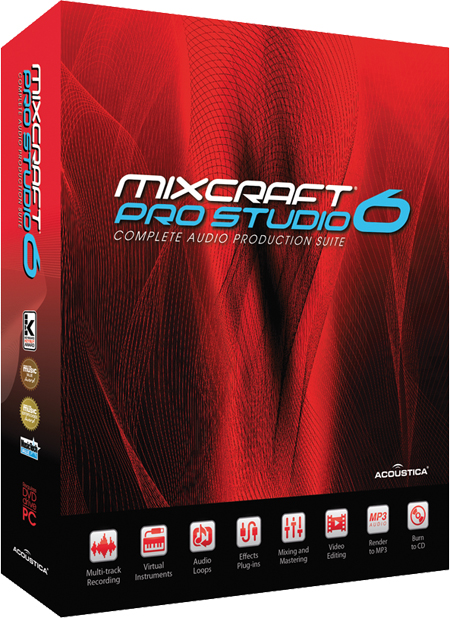 When we reviewed Mixcraft 5 two years ago, we considered it a very impressive low-cost recording package with a staggering array of features. Originally fashioned after GarageBand, its easy-to-navigate GUI and abundance of instruments and effects has attracted many musicians who were perhaps a little intimidated by the complexity of the major DAWs.

Version 6 comes in two flavours: the standard Mixcraft 6 and an expanded edition, Mixcraft Pro Studio 6, which we’re reviewing here. With 55 effects and virtual instruments (18 more than the standard version) it includes mastering technology from iZotope plus emulations of analogue synths and other acoustic and electric instruments. 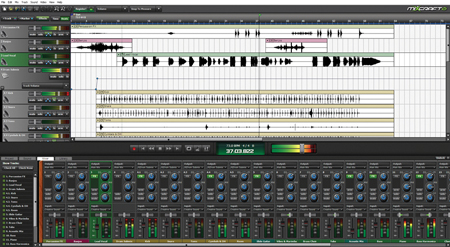 Version 5 was already packed with goodies and version 6 has expanded the feature set even further – so much so that it’s impossible to squeeze everything in here so we’ll stick to the highlights. The updated project GUI is simplicity itself, with a timeline, tracks and transport controls plus four tabs labelled Project, Sound (audio/MIDI editing), Mixer (including three-band track EQ) and Library (loops, effects, instruments and sound effects), which open in a separate pane beneath. The latter has grown to more than 6,000 items, including dozens of song kits plus new drum and percussion sets. Searching and importing of loops has also been improved.

Significant new additions to the instrument sets include Acoustica Studio Drums, a collection of acoustic and electric drum sounds, and two excellent transistor organs from the 60s. New effects include EZQ, (dubbed the world’s easiest EQ) and a basic multiband compressor, Broadcast Multiband. The video interface has also been improved, with still image importing, automated effects and scrollable text titles.

Rather than innovate, Mixcraft 6 tends to play catch-up with the major DAWs in many respects. This is no bad thing because it gives Acoustica the opportunity to implement the most important features of a modern DAW without bloating the program with unnecessary complexity.

New features in that category include hosting of ReWire-compatible software, MIDI control surface support with MIDI Learn, the routing of MIDI track data to audio effects (such as a vocoder or pitch correction) and punch in/out recording. Others include looped recording with multiple takes that can be comp’ed together (although there are no comping tools as such), unlimited lanes in a single track, and submix tracks for grouping tracks together for anything from simple volume level changes to effects processing and automation.

Previously never a strong point in Mixcraft, the MIDI processing department has been updated with tools such as quantize, humanize, transposition, velocity scaling and so on. Each topic appears in a separate window along with plenty of parameter-adjustment possibilities. These facilities now make working with Mixcraft’s bundled virtual instruments so much easier than before.

Although still basic, the piano roll view, too, has been improved with easier velocity editing. There’s a rather cramped but perfectly usable controller lane with a selection of the more common MIDI continuous controllers. Others, from 0–127, can be typed in. Tools here, though, are limited to Pencil and Eraser. Drum map implementation is good, with maps for the various drum sets and you can also build your own. Notation, although improved by triplet support, remains rudimentary.

Other useful improvements include a handy chromatic guitar tuner on audio tracks and effects chain saving. Audio clips can now be reversed and phase-corrected, and time can be inserted or removed from a song.

It’s worth pointing out here that all of the new features mentioned above also apply to the standard version of Mixcraft 6, not just the Pro version. Both editions have identical production features. Mixcraft Pro Studio 6, however, sees mixing and mastering features, synths, a Steinway piano and a range of higher-end audio effects being added to the package.

Again, there are too many plug-ins to review here in detail, but one of the most significant is the Acoustica Pro Studio Reverb, a lush-sounding algorithmic reverb suitable for pro work. It sounds great but we can’t help thinking that a modest convolution reverb would be an added attraction.

Another highlight is Pianissimo, a grand piano featuring 250MB of Steinway Model D samples and up-to-the-minute piano modelling. Steinway pianos suit many styles of music and this one has controls for hammer sounds, velocity curve, sympathetic resonance, chorus and a simple three-band EQ.

Of the new instruments, the star of the show is perhaps the ME80 Vintage Analog Synthesizer, a very realistic Yamaha CS80 emulation. Like the original, it supports polyphonic aftertouch and is capable of producing some of the sweetest, juiciest sounds imaginable. For pure powerhouse sounds, though, Memorymoon – a re-creation of the legendary Memorymoog – is still present and correct. It’s good for arpeggios, too.

What really differentiates the Pro from the standard version are the many effects plug-ins, like the highly accurate 31-band EQ (sliders 6dB–24dB), which has plenty of starter presets.

iZotope is probably the best known developer of mastering tools and the company’s Mastering Essentials suite is included here. Comprising a parametric valve equalizer, room simulation and a tube amplifier for adding colour to a final mix, these are high-quality tools indeed. With a smooth classic valve sound, the four-band Valve Equalizer is ideal for polishing a mix, and the Room Simulator has a speaker-widening control as well as the usual room size, damping and wet/dry controls. The Tube Amplifier is split into three sections: bass compression, tube limiter and tube saturation. Get used to using these and you may be tempted to upgrade to the full version of Ozone 5.

However, the plug-ins that we found most interesting were of the creative variety – the Mid-Side range. Working with the stereo separation, the Envelope Follower modulates filter cutoff frequencies based on the dynamics of the incoming signal. With a direct response to the musical material, the results are spectacularly funky. Nine filter types, ring modulation and analogue distortion are available.

Another very useful Mid-Side plug-in, the Harmonic Vitalizer functions as a stereo enhancer and proved extremely effective for adding 3D space to mixes. Other notables include the Ferox Tape Emulator (vintage tape saturation), TB Gate (noise gate) and the TB Parametric Equalizer, which has six colour-coded bands and filter types. It can be used to EQ the mono and stereo portions of stereo material independently and is a very useful tool to have to hand when mixing and mastering.

If you prefer your parametric EQ vintage-style, there’s also the GSXL 4070. Modelled after the classic hardware equalizers used in professional recording studios, you get four bands of precision parametric EQ plus a high-pass filter. It’s an excellent tool for dialling out unwanted frequencies and emphasising those that you wish to highlight.

Not much has changed on the audio editing front, with features like time-stretching, pitch-shifting, beat detection, noise reduction and envelope editing probably being enough for most user’s needs. If not, they can specify an external sound editor such as Audacity to work in conjunction with Mixcraft.

If you already own version 5 we think an upgrade to Mixcraft Pro Studio 6 is well worth it just for the improved production features alone. Anyone new to recording, though, who’s maybe familiar with GarageBand, will surely find Mixcraft Pro Studio 6 very tempting. It’s easy to understand yet at the same time provides all the essentials for down-to-earth audio and MIDI production.

This video from acoustica explores some of the new plugins with Mixcraft 6:
Acoustica
#DAWs#Mastering#Mixing