Novation helped to power the sound of electronic music in the 1990s with its classic BassStation and Supernova synths, and went on to become one of the leading developers of compact but powerful synthesizers and MIDI controller/audio interface all-in-one instruments. Manufacturer: Novation Price: £300 Contact: Novation – 01494 462246 Web: www.novationmusic.com Its latest offering is […] 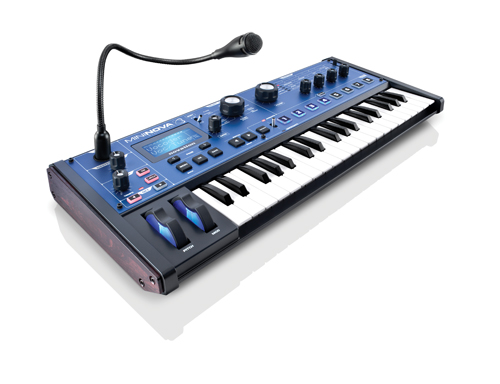 Novation helped to power the sound of electronic music in the 1990s with its classic BassStation and Supernova synths, and went on to become one of the leading developers of compact but powerful synthesizers and MIDI controller/audio interface all-in-one instruments.

Its latest offering is a relative of its Ultranova synth, called the MiniNova. Designed both for use in the studio and on stage, it shares its bigger brother’s sound engine but has a smaller form factor and a few tricks of its own up its sleeve.

MiniNova is small and lightweight enough to be carried in a backpack alongside a laptop and feels sturdy in use. The 37 keys are very small, but that’s the trade-off for the extreme portability of the unit and reflects the fact that you’re unlikely to be playing much Beethoven on it. When playing chords the keys feel a bit too small, but if that’s a problem you can connect an external MIDI keyboard with larger keys.

Around the back you get a range of ports including hardware MIDI in/out, stereo jack outputs, headphones, a sustain pedal input and external audio in jack for routing other sounds through the synth’s effects sections. A Kensington lock port is provided to prevent it going walkabout in public areas, and a power supply is included. MiniNova can draw power and send MIDI over USB, though this extends only to sending MIDI between the synth and computer, it doesn’t function as an interface between the computer and the MiniNova’s hardware MIDI ports. Audio over USB also isn’t possible, which is a bit of a shame as it would have made the unit more of a portable studio, though this is most probably to keep the cost to a certain level.

An XLR mic input on the front panel can be used to connect a gooseneck mic if you want to take advantage of the synth’s vocoder and VocalTune capabilities. There isn’t a mic included in the box but that’s arguably because not everyone will use this feature – it’s not the instrument’s primary selling point. It works well, however, simplifying the vocoding process and providing a range of presets to mangle your voice. VocalTune is capable of real-time pitching effects and these are similarly straightforward to use. Vocoding as a process sounds a bit dated these days, though some of the more extreme VocalTune effects are rather more interesting for styles other than chart or pop music.

At its heart, MiniNova is a synthesizer, and reflecting that you get 256 built-in sounds accessible in categories from the large Select dial and via the Patch buttons. These are divided into genres and types, and there’s also a Classic Synth option.

As ever with Novation, the sounds are excellent, with all kinds of burbling basses, cutting leads, swirling pads and shimmering synths to be explored and enjoyed. It’s all very electronica-oriented, of course, so it won’t surprise anyone to find an equally large filter cut-off knob placed firmly in the centre of the front panel for getting that classic fat sound. There are 128 onboard slots into which you can save your own sounds, and the possibility to use up to 18 voices.

On the right is a Perform section with six selectable parameters and four knobs that affect whatever parameter is currently selected. These make it quick and easy to dial in changes to filter, amp and oscillator settings as well as tweaking effects, and are fun to work with.

There’s a heavy emphasis placed on changing sounds in real time and this is reflected in the inclusion of an Animate function. Flip into Animate mode and up to eight of the numbered pads light up. Pressing one will change the sound in a preset manner, and you’re also able to record your own animations and store them. These can be things such as dropping an extra voice in or out of the sound, adding transpose and portamento, or adding effects to a sound. It works really well, the idea being that you punch the buttons during a live performance to morph sounds temporarily, creating a DJ-style effect.

There’s also an arpeggiator with tempo control and Latch mode, and the eight pads light up in red to denote which steps are to be included. You can turn steps on or off by hitting the pads. It’s possible to change the arpeggiator type as well as other settings such as chord mode, audio input and sound tweaks using the Menu system and the decent-size LCD screen, which is big enough to provide coherent text feedback. There’s also a software editor available that runs in standalone mode and as a plug-in inside your DAW to provide easier access to all the parameters of the synth. Unfortunately, this wasn’t available at the time of writing, but given Novation’s pedigree in software as well as hardware development, we can’t imagine there will be much to go wrong with it. 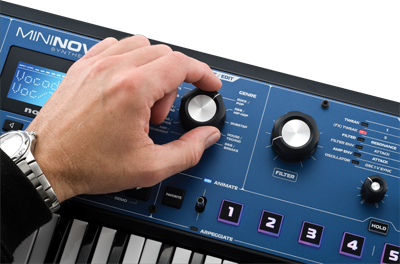 Choose from multiple sound categories such as rock, pop, dubstep and house.

At the heart of MiniNova’s sound generation are 14 conventional waveforms, 36 wavetables and 20 digital waveforms. Each of the three oscillators has density and detune settings for fattening up sounds, virtual sync and ‘hardness’. There are 14 filter types (two of which can be run simultaneously), six envelope generators, three LFOs and 20 modulation slots, where you can link modules of the synth engine together to shape sound. You can use up to five effects on each sound, including distortion, reverb, chorus/phase, delay, compressor, EQ and Novation’s Gator effect. All of these can be edited via the unit itself, although, as ever, it’s probably going to be quicker using the software application.

Never shy about bundling some free goodies with its products, Novation also includes a version of Ableton Live Lite to get you started making music, as well as a software version of its excellent BassStation, which still sounds fresh even after all these years. To top things off there are 1GB of royalty free samples from Loopmasters, so if you’re looking for a bit of added value, you’re likely to feel satisfied.

MiniNova is a great little synth, portable and flexible enough to be used in a variety of studio or live performance situations. The small keys inevitably mean that you will be doing a certain type of playing on it – probably simple sequences or bass lines – but then that’s what the sounds lend themselves to anyway. The hands-on performance controls are well implemented and thoughtfully some are backlit, which is always helpful in dark gig venues. All of the major tools are equipped with big, easy-to-grab dials and things like transposition are given their own buttons (again, useful when you’re mid-set). The two old-style flip buttons look great but could conceivably become casualties of extensive gigging, so you may have to be careful that they don’t get bashed around too much.

The vocal effects in MiniNova are simple to use and take all the hassle out of vocoding, though in our opinion, the VocalTune stuff is probably more usable outside the confines of purely electronic music. Elsewhere, the sounds are big and powerful and the Animate section is a nice addition, enabling you to manually punch in variations to sounds that are genuinely interesting and will spice up any live performance. MIDI integration with your computer is also well handled, though adding audio streaming over USB would have been the icing on the cake (this feature is available in the Ultranova if it’s a deal-breaker for you). There’s flexibility with the option to route external sounds in through the synth’s effects and to use it to power external MIDI hardware.

If you’re in the market for a fun, flexible, great-sounding and ultra-portable synthesizer, MiniNova is well worth checking out.

+ Easy and fun to use

– Audio over USB would be the icing on the cake

A fun and great-sounding synth with excellent live performance features. Ideal for all kinds of electronic music.