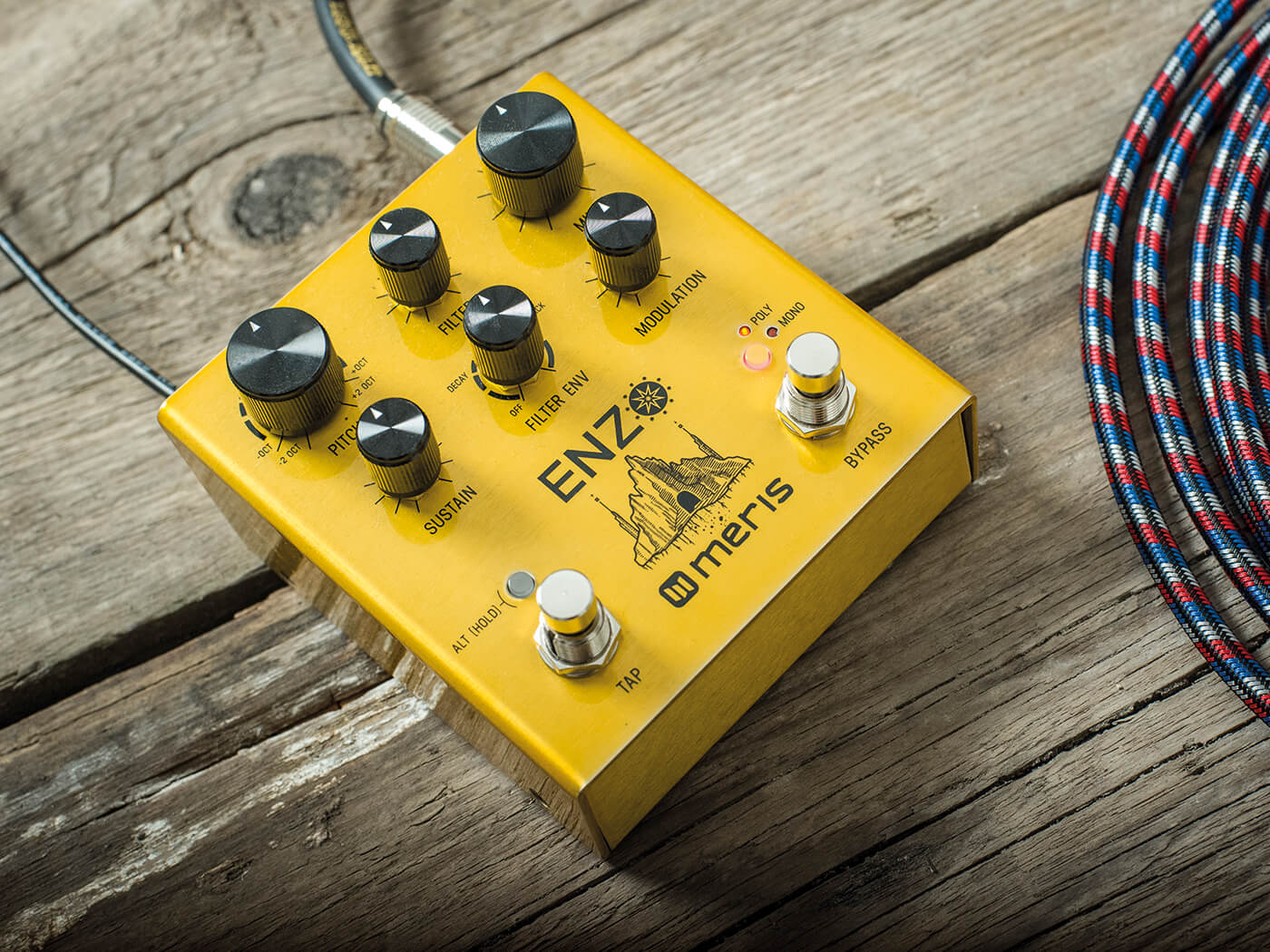 The thriving worlds of boutique guitar stompboxes and modular synthesis have superficial parallels in terms of physical format, quirky names and beautiful livery, but their sonic territories seldom overlap. Yet Meris’s Enzo aims to offer guitarists some of the flavour and tone-shaping possibilities of the synth player, in stompbox format.

And while we’ve come across plenty of guitar-synthesiser pedals before, this one might just take six-stringers further away from traditional plank-plucking sounds – and in more different directions – than anything that’s come before it.

This is Meris’s fourth stompbox, and it follows the same form factor as the California maker’s first three: the Mercury7 reverb, Ottobit Jr bitcrusher and Polymoon delay. But as with those digital units, the functionality goes way beyond what you might expect from six knobs, two footswitches and a couple of little buttons. The controls themselves are digital, and each has a second function, accessed by holding down the alt button.

In fact, there’s more to it than that: hold that button while powering up the pedal (ie, plugging the included 9V adaptor into the back) and you enter ‘global settings configuration mode’. This lets you change a host of things, including stereo setup, buffered or relay bypass, and – perhaps most importantly – how the expression input will work.

If you have a TRS expression pedal, you can use it to morph between two settings; find an extra £115 for the Meris Preset Switch and you can use that to stomp between four different sounds; or if you go for the Meris MIDI I/O interface (£99), you can plug in an external MIDI controller for storing and recalling presets galore.

All well and good, but what does the Enzo actually do? In short, it’s a dual-oscillator synthesiser with two-tap modulated delay, three synth modes (poly, mono and arpeggiated), two envelope types (triggered and following) and a six-mode filter. By the way, we’ve been calling it a ‘guitar synth’ pedal, but the Enzo isn’t only aimed at us twangers. Everything it does is equally applicable to bass, keys and just about any other sound source you’re in the mood to pulverise.

Where do we begin? Manuals can only carry you so far… so we’ll just take a deep breath, set all the knobs to halfway and see what comes out. Actually, what you get with the synth mode set to dry is not so scary at all: there’s some whumpy bass oddness going on, but this is basically a gently modulated delay, with time set by the tap footswitch.

A clockwise twist of the filter control removes the whump and replaces it with a funky envelope-following effect; then a tweak of the knob below that lets us adjust the envelope’s sensitivity and direction. So far, so ‘Q-Tron meets Memory Man’.

Tell you what, then – let’s turn the delay off for now and focus on the tone-twisting stuff. Holding down alt and turning mix to zero kills the repeats, and now we might just be ready to dive into the monophonic synth. The initial difference is little more than a background fizz, but once we start dabbling with the mix, sustain and modulation controls, a whole world of Moog-style sounds – from buzzy square waves to giddy bleeps – begins to emerge.

The filter controls can make it as phat, as nasal or as shrieky as you want it to be, and Meris’s 32-bit floating-point processing keeps everything tightly hi-fi. That’s still the case when we start tampering with the pitch: you’ve got two octaves up and two octaves down to play with, and the mix control lets you blend in your chosen interval.

Tracking is immaculate with single notes in the lower register (or on a bass), but can disappear a little when you stray up the neck. Our tone is thoroughly messed up by now, and switching to polyphonic mode will make things a whole lot more disorientating, especially if we crank the modulation and – by holding down alt and turning the sustain knob – introduce ring modulation.

We’re going to need some delay to help us through this, so back it comes, and on we go with sounds ranging from a warped church organ to a Blade Runner tribute, via something reminiscent of a synth pad from a 90s house banger.

Oh dear, we’re almost done with our review and we haven’t even mentioned the arpeggiator mode, the swoopy portamento function or the stereo ping-pong delay yet. But we do need to talk about using the Enzo with an expression pedal, because this is where it reveals some of its most creative powers.

Simply set one sound with your pedal in the up position, then push your toe down and set another; you can now blend between the two in mid-performance. This often works best if the two sounds you’ve selected aren’t too different: changing only the filter settings, for example, results in some radical wah tones.

If nothing else, an expression pedal is an easy way to (temporarily) store two presets. Meris’s four-way footswitch is a far better solution, and it’s only a pity you can’t use both at the same time – or even go from one to the other without unplugging the unit to change the global settings.

Clearly, this is about space-saving, but it does make you wonder what a bigger version of this unit could do. Imagine it with a built-in expression pedal and a screen for scrolling through 200 presets… that really could make the magic of synths accessible to many an envious guitarist.

There’s no reason the Enzo couldn’t happily be incorporated into a live synth setup, if you were so inclined. However, we’re sure this compact stompbox will prove to be very tempting for adventurous guitarists (or bassists) who may be at the outset of their journey into the dark side of the Moog and want to inject a sheen of synthesis into their more traditional live-band setup.

Many players will find the possibilities offered by the arpeggio and filter add up to a hugely creative and rewarding experience, especially with the extra control an expression pedal affords. In fact, why not go mad, buy one of these and the Roland AX-Edge keytar reviewed in this issue, and take the next gig you do by storm?

This three-footswitch guitar synth in a box sidesteps the need for a dedicated pickup and uses a ¼-inch jack to access its three synth engines and editable presets. Also has a digital display and flexible signal routing.