Sometimes you need to track all your gear at once. Hollin Jones lifts the lid on M-Audio’s M-Track Eight… Details Price £269.99 Distributor InMusic Contact via website Web www.m-audio.com A lot of the audio interfaces that get released are small and compact, with only two or four simultaneous inputs. For many people this is fine, […] 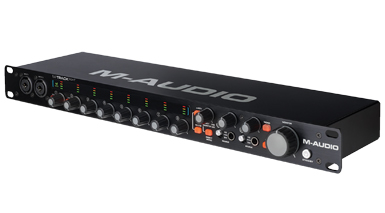 Sometimes you need to track all your gear at once. Hollin Jones lifts the lid on M-Audio’s M-Track Eight…

A lot of the audio interfaces that get released are small and compact, with only two or four simultaneous inputs. For many people this is fine, because while you may have lots of tracks in a project you only ever need to record one thing at any one time.

At the other end of the spectrum, a full-on studio would have a far more complex I/O setup. Somewhere in the middle are a sizeable number of producers who need more channels than a portable box provides, but not enough to warrant bolting DI boxes to the studio walls.

M-Audio has been making audio interfaces for many years, and the M-Track Eight is the largest member of the M-Track family. It’s 1U rack mountable, which veterans will remember pretty much everything from synths to effects used to be, and feels properly bomb-proof in its metal housing. It’s heavy too, though this is a moot point since it’s designed to be bolted in rather than carried about.

It’s an eight-in, ten-out box, if you count the control room monitor outputs, and gives you eight XLR combo inputs with individual metering per channel and eight balanced ¼in outputs. As such it’s perfect for plumbing stuff into semi-permanently.

You might connect the outs of a mixing desk to it, for example, or wire up a few synths, vocal, guitar or drum mics or indeed a whole multitracked drum kit.

Six of the inputs are on the rear but two are on the front for easier access, so you can whack in a guitar or bass.

There’s a USB2 port on the back for connecting to your Mac or PC, and power is via the bundled PSU (this is much too big a unit to power over USB).

There’s phantom power and this is available separately for channels 1-4 and 5-8, which is a nice touch since it means you can power mics that require it but plug those that might be damaged by it into the other ports and not power them.

Additionally, each input comes with dedicated line-input circuitry, so you can record and track with external preamps.

Phone Home
There are two headphone outputs on the front panel, each with separate level controls, and these are switchable to monitor different sources for more flexible mixing and monitoring.

The unit supports zero-latency monitoring thanks to the USB/Analogue Direct Balance knob, so you can control how much of the direct signal and how much of the software playback you hear.

Flexible output routing lets you send signals to outboard gear or analogue mixers for summing or processing. There are also Mono and Dim buttons on the front panel as well as a large monitor level knob. 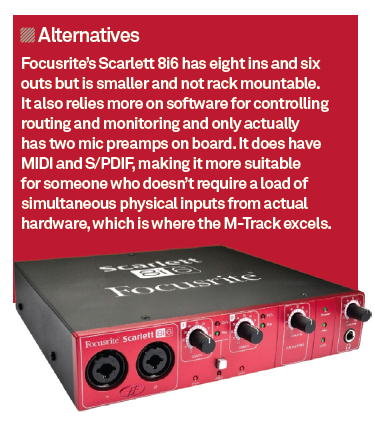 The M-Track Eight is very well engineered and feels like a serious piece of kit. In use it performed excellently, capturing everything we put through it with crystal clarity. It’s also easy to find your way around and won’t baffle less experienced users.

As a bonus it comes with a pretty generous complement of software too. There’s a copy of Cubase 7 LE and you also get some bundled Waves plug-ins: TrueVerb, AudioTrack, the Eddie Kramer Effects Channel, L1 Ultramaximizer and Manny Marroquin Delay.

As you may be aware, Waves is one of the world’s leading developers of virtual effects, so getting some of their stuff for free is always a good thing.

To buy the plug-ins separately would cost you somewhere around the same as the total price of the interface, so you’re essentially getting a bit of a bargain.

They will also greatly enhance the sound of your tracks over what Cubase LE’s effects can do.

For anyone out there who needs to record multiple tracks at once oreven just wants to leave a bunch of stuff wired in permanently, the M-Track Eight is a great performer that will act as the bridge between your microphones and music hardware and your software recording environment. The added software you get is a nice bonus, too. 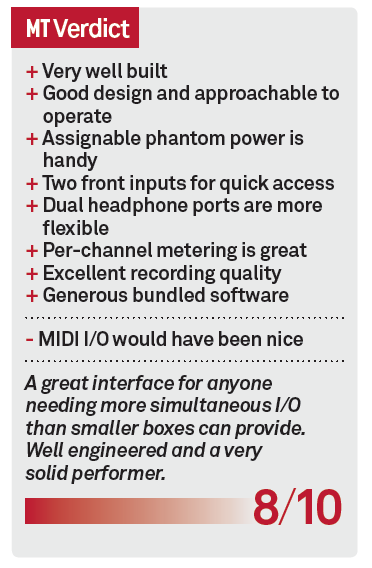