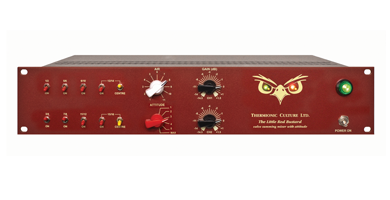 There can be no denying that digital recording now reigns supreme among professional recording engineers and home recordists alike. The brittle sound of early digital recorders with low sampling rates is now, thankfully, a thing of the past; however, many engineers feel that mixing within a DAW produces a somewhat sterile sound, when compared to mixing through analogue equipment.

Going one step further, there are those who insist that when transistorised recording consoles replaced valve-driven ones it was a backwards step in terms of sound quality. Indeed, the vast majority of electric guitar players still choose to use valve amplifiers for their rich and warm tone and their ability to be overdriven to produce musically pleasing saturated tones.

Among tube fans, Vic Keary – the big-boss-man of Thermionic Culture – is something of a valve guru; he’s been designing valve equipment for more than 50 years. His company offers a range of pure valve studio outboard gear, that includes microphone preamplifiers, compressors and equalisers, as well as tube saturation units (the Culture Vulture) and summing mixers.

The Little Red Bustard is an updated and up-rated version of Thermionic’s smaller summing mixer, which can be used either as a standalone 16-channel mixer or provide additional inputs for the fully-featured Fat Bustard 12-channel mixer; check our review of the limited edition Green Fat Bustard on our website.

Like the earlier version, this new Little Red Bustard features 16 input channels that enter on semi-floating XLRs and appear on the front panel as eight stereo pairs that can be switched in or out. The original Little Bustard featured individual level and panning controls for channels 13-16. However, these have been dropped in favour of simple switches that collapse the stereo output to mono; there are no individual level controls – level and panning balances should be performed within the DAW.

Positive Attitude
The most notable difference between the old and new units is the inclusion of controls for both Attitude and Air. The Attitude dial provides the same second harmonic enhancement control that graces the Fat Bustard. In a nutshell, this feature adds varying degrees of valve colouration (between 0.01% and 5% of second harmonic thermionic distortion), then emphasises the natural tube character of the unit.

At lower levels, this imparts a lovely warm and fat tone to signals, while higher settings introduce a more obvious tube saturation to the sound. This control increases gain by up to 12dB, so the output level should be reduced when dialling in lots of Attitude.

The Air control boosts high frequencies above 7kHz, peaking in the region of 30kHz. This control is quite different from ordinary high-frequency boosts that usually give an obvious top boost in the region of 10kHz, instead providing a silky high-end that adds sparkle and space to mixes.

Simple metering is provided by two LEDs that become the glowing eyes of the Little Bustard image on the front panel. These LEDs indicate the level at the stereo output before the output level pots – glowing yellow, green or red to show the level of signal present. Under normal operating conditions, the eyes should glow green, indicating an optimal signal level between 0dBu and +10dBu. Levels above this will cause the eyes to glow red, indicating a hot signal that will have higher amounts of second harmonics.

The cleanest results are produced by keeping the output level control at maximum with the Attitude control set to position one and the Little Bustard’s eyes glowing green.

Inside the box are four high-quality NOS American valves, two each for input (GE 5965s) and output (Sylvania 6189s), while the back panel features the 16 semi-floating XLR inputs and the unbalanced stereo output XLRs; a ‘balancing box’ with a pair of Sowter 1:1 transformers can be supplied.

Alternatives
Looptrotter’s Satur-8 (£2,100) is, as the name suggests, an 8-channel summing mixer with a saturation control for each channel. It aims to deliver the sound of vintage analogue tape and valve consoles, but it’s a solid-state unit.

Sounds Good
We began our test of the Little Bustard by switching it on (the power switch is sensibly located on the front panel) and leaving it to warm up for 30 minutes; as with all analogue gear, performance improves after a little warm-up time.

In order to hear the influence of the Attitude and Air controls, we fed in a multi-channel drum kit recording that featured close mics, as well as a pair of distant room mics. Creating a basic mix within our DAW, it was immediately obvious that the Little Bustard was adding some lovely valve sweetness to the sound, even without driving the unit hard or engaging the Attitude or Air controls. When we did dial in some enhancement, things became much more interesting.

The Attitude control, used sparingly, added a noticeable analogue warmth to the digital recording, seemingly providing a more solid sound with greater focus. At higher settings, the more saturated tone reminded us of the effect of overloading analogue tape, introducing some subtle – but appealing – compression-type effects. Such effects might be too much for processing whole mixes; however, when feeding in smaller groups of sounds or individual sources, the dial can be turned up to create very convincing vintage saturated tones.

We found the Attitude control great for giving electric guitars a biting edge, and it’s possible to recreate that ‘hot’ vocal sound that dominated many classic soul recordings from the 1960s,

The Air control is another thing of beauty. Again, when used sparingly, mixes gained a sense of space and depth, sounding clean and open. At higher levels, the sounds appeared much glossier; our drum mix really came to life, with a wonderful sparkling ambience that lent the sound an almost holographic quality.

The addition of these enhancement controls is a real bonus over the original version of the Little Red Bustard. The warm, sweet and clean valve tone, without added Attitude or Air, is just as sonically pleasing as it ever was. However, now it’s possible to inject new life into clinical digital mixes with the gorgeous tube enhancement. Along with its big brother, the Fat Bustard, this is the best-sounding analogue summing mixer we’ve heard to date. 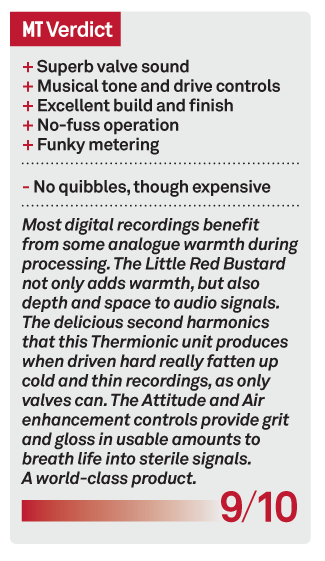