The Microphonic Soundbox could add some acoustic seasoning and flavour to your music. Dave Gale thumps and bows this new box of tricks… 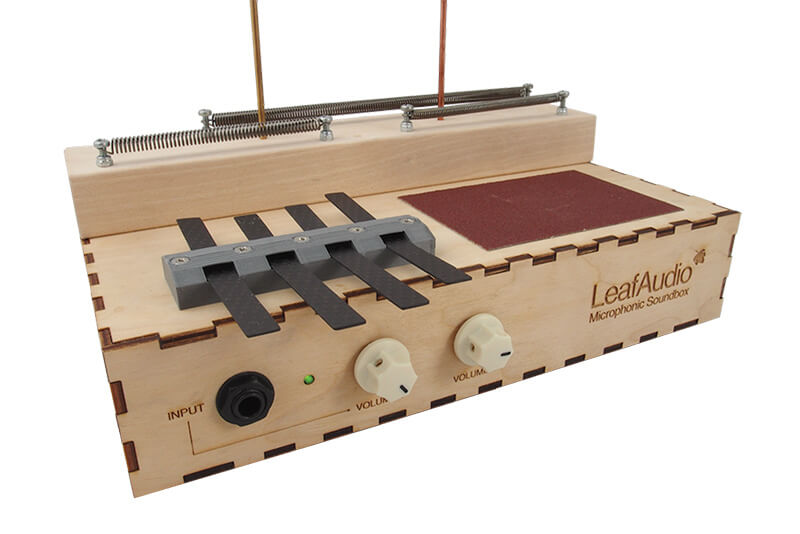 In our never-ending search to sound that little bit different, it’s easy to turn to the latest sample library or virtual instrument, but the new Microphonic Soundbox, from Leaf Audio, offers a taste of the avant-garde in a pint-sized, pre-prepared package.

Working firmly to the old adage that ‘Empty vessels make the most noise’, the bulk of the Soundbox is exactly that – an empty wooden box! In essence, this simply creates an acoustic resonating chamber, much like the body of an acoustic guitar. Inside the box, two contact microphones pick up any vibration, whether sustained or sharp in transient, with the mics feeding independent pre-amps, which are powered from a 9v battery, inserted via the underside of the box.

A mono output jack is mounted to the rear of the box and feeds the signal to the outside world, at line level. An external input is also available, should you prefer to use a piezo microphone of your own, but this will result in a disconnect of one of the internal piezos. In either case, the front-mounted gain pots offer amplification up to 100 times the input signal, making them very sensitive indeed.

Striking or hitting the box produces an obvious thumping sound, much like striking a conventional microphone, but thanks to the enclosed proximity, the lower frequencies are far more abundant, but the real fun starts when you explore the surface-mounted gizmos.

Beginning with the top/front of the box, we have four kalimba strips, sometimes described as a thumb piano. Made from carbon, each kalimba strip can be pushed/pulled into place which, like a ruler on a table, will change the frequency of the note, meaning that suitable tunings can be applied to fit your track. These are pretty stiff to handle so fine-tuning is a tricky business, but the resulting acoustic twang is very ruler-esque.

Located to the right of the kalimba is a sheet of what is best described as sandpaper. The rough texture means that any finger or object that might scrape across this surface becomes full of detailed depths.

Brushing it quickly, with just a finger, throws up some interesting cabasa/shaker-like possibilities, although like any new instrument, it’s going to take some time and practice to become suitably proficient at playing in time, particularly when tracking-on.

Turning to the the upper level of the box, various pieces of metalwork are mounted on a solid block of wood, which remains coupled to the main wooden box. I’m not sure if this is for practical or acoustical reasons, but in either case, being raised by a couple of centimetres, makes this section more accessible.

Three springs, each in varying length and density, offer different pitches, the larger spring offering the greatest length of decay, in much the same way that a spring reverb might. Two metal rods are snugly mounted in pre-drilled holes, both being different lengths for alternate pitches.

Health and safety dictates a mention here, as they could easily be a hazard if you decided to lean over the box, but away from this point, interesting modal timbre can instantly be obtained.

It’s safe to say that this is a form of musical instrument, albeit at the simpler end of the spectrum, and because of this, it will take practice to get the best from it. This does not make it difficult to use, it just means that like all musical pursuits, a little time in experimentation will yield some very useable and unique results.

Having said that, even a single strike, bow, pluck or scrape, will offer some rich harmonic content to play with, so if you like to experiment with sound, either with outboard FX or within the DAW, it’s a useful sonic palette that’s loads of fun to use. There’s lots of diversity in sound too, so it should be useful in a number of settings.

Taking the main output and running it into my audio interface, I started to explore the musical side of the Soundbox, with some basic nimble finger work, drumming the surface of the box. Thanks to the enclosed proximity of the piezos, there’s an unbelievable amount of bottom end on offer.

Repeated tapping resulted in a very kick like timbral experience, but with the ability to add accents and dynamics, with a little digit dexterity. Drumming with fingers, while dampening the surface, results in suitable changes of pitch, feeling tighter in tonal construct.

This trick also proved useful when moving to the sandpaper, which gave a very convincing high frequency timbre, admittedly with deeper tones than one might expect for a hi-hat or shaker. My overall thinking here is that any overzealous lower frequencies can be easily tamed and tailored within the DAW, to achieve the desired effect, although with such an abundance of bottom end, some form of in-built roll-off would have been a very useful addition.

At the point of purchase, it’s possible to include a violin bow and rosin as part of your package, which will be useful for playing the metal rods. Upon bowing these, a suitably eerie timbral quality results, which is very firmly in the 20th century avant-garde camp, and not too far sonically from a waterphone. Apply a merciless reverberation to this and the richness of harmonic content rings through.

The kalimba section is of particular interest, given that it offers an element of melodic content, albeit only four notes, or eight, if you manage to tame and use both sides of the kalimba strips, which are heavily supported in the centre.

I found that making these longer resulted in the most pleasing resonant tones, so had to make do with only four notes, but the results are very ethnic and immediately conjure up images of mbira-like African instruments. 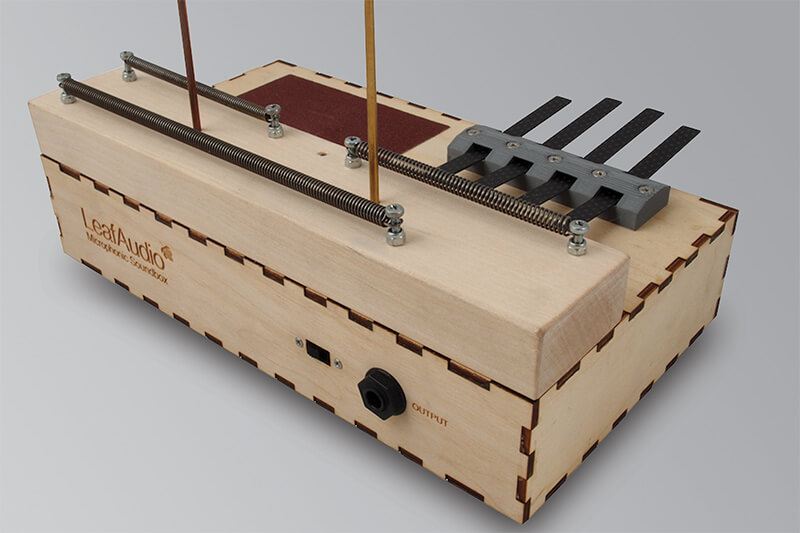 I would suggest that even an ethnomusicologist would find it difficult to guess that these are carbon, rather than a real kalimba’s usual sprung metal. Conversely, moving to the metal springs, many overtones are apparent when plucked, with varying densities resulting in different tonal colours.

Reaching for a set of drum brushes, I found that brushing these rhythmically resulted in some very useable ideas, which I immediately committed to audio. Slowing this audio, through editing, gave some very interesting textures.

Due to the nature of the design, and the various bits and bobs that may sympathetically vibrate, I did find that much of what I tried benefitted from a degree of dampening. Striking the box hard with your fingers, will unsurprisingly allow the metallic attachments on the box to ring-on.

Dampening these with a free hand prevents this, with the added benefit of centring the sound, so I found myself beginning to play it like a real instrument, in much the same way that a percussionist may play a cajón or hand drum.

Like all the best ideas, the Microphonic Soundbox is all about simplicity itself, and you can’t get much simpler than a box that you hit, which is then amplified, yet despite it’s humble origins, the results are effective. According to Leaf Audio, jazz artists and improvisors have already started to use the Microphonic Soundbox live, with jazz artist Bugge Wesseltoft exclaiming that this was his favourite product at Superbooth.

It has much to offer as an interesting percussion instrument, but as a source to sound generation for new and exciting sampled or processed tones, it’s a very strong and useful contraption, and one that I can see being in great demand at the creative end of business.

If you have a Eurorack system, the ‘Ears’ module from Mutable Instruments offers a contact microphone, which generates an audio signal, through touch or tapping. This can be fed into numerous Eurorack processing devices. 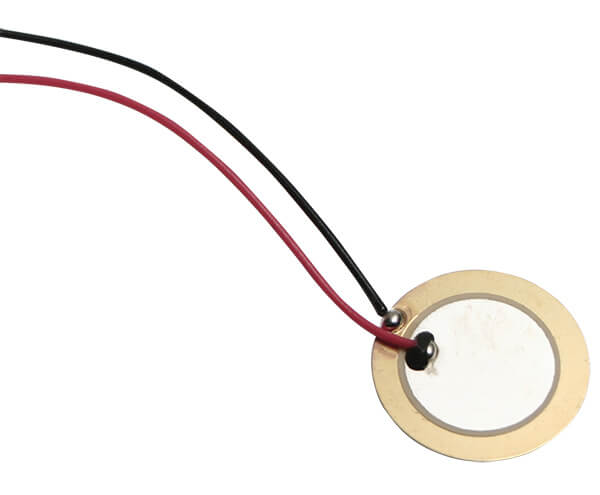 A further DIY alternative to the Soundbox, would be to get creative with a piezo microphone or two. These are readily available from the usual online auction sites, starting as cheap as a few quid, and can be stuck to anything that vibrates, before feeding into a pre-amp or similarly equipped audio interface. Give it a shot!