Gregory Scott’s design is a fully-featured rackmount unit par excellence. John Pickford takes a look… Details Manufacturer Kush by UBK Price £1,320 Contact Unity Audio 01799 520786 Web www.thehouseofkush.com Compressors, in both hardware and software form, come in many guises. While some are so simple that they feature little more than a gain reduction control, others […] 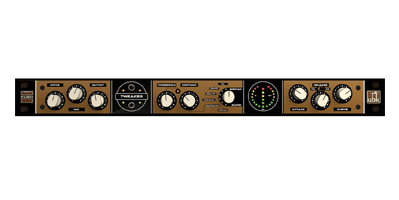 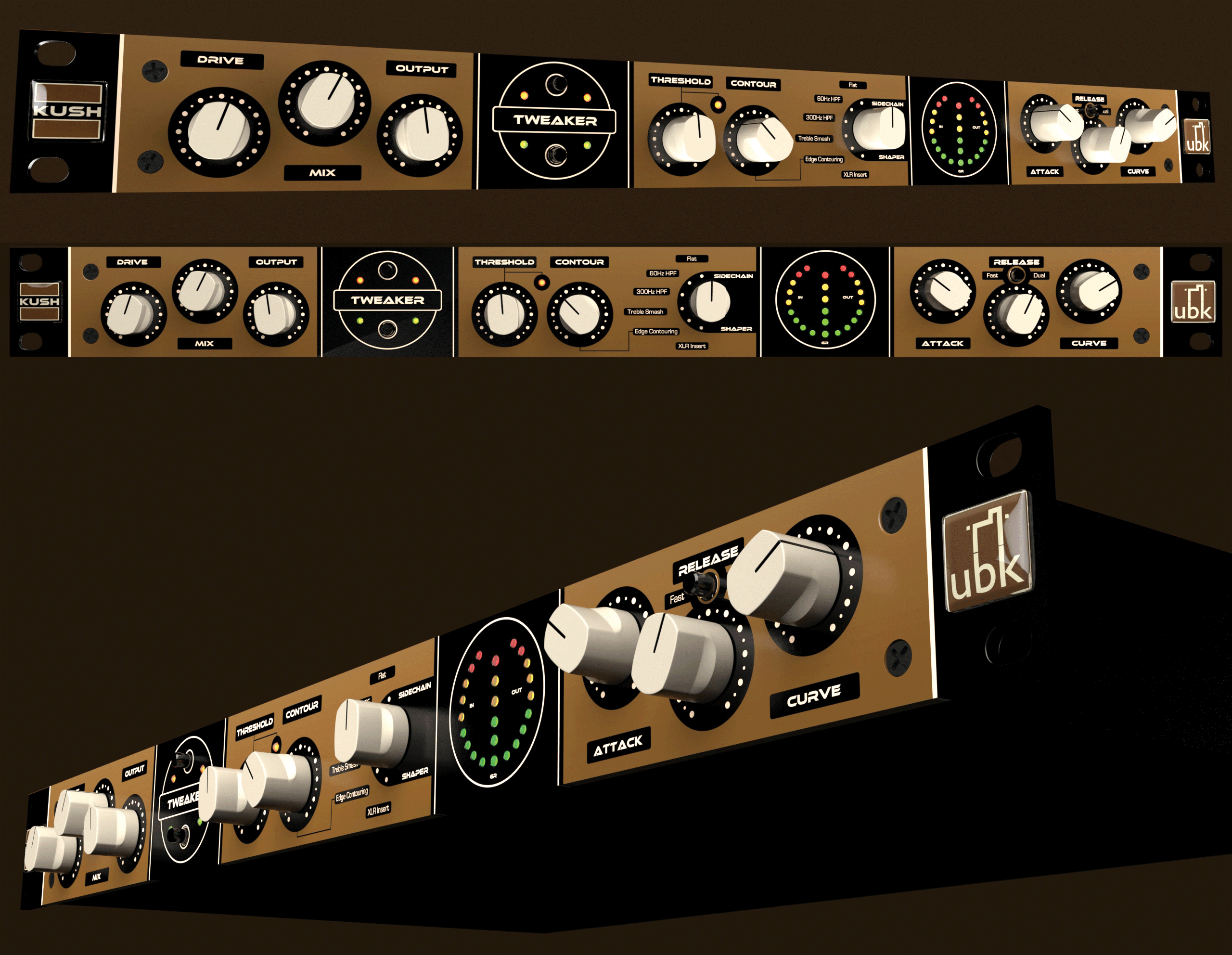 Compressors, in both hardware and software form, come in many guises. While some are so simple that they feature little more than a gain reduction control, others are more multifaceted. The Kush Tweaker is firmly in the latter camp, with all the controls you would expect to find on a fully-featured compressor, as well as several other unusual and useful controls.

While many designers aim to recreate the sound, and often the look, of vintage compressors from the 1960s and 1970s, designer Gregory Scott set out to design a single unit that could faithfully mimic the behaviour of several classic designs, as well as offering its own varied styles of compression. The Tweaker offers everything from the smooth glue of an API 2500 over a mix buss, through to the full-on ‘all buttons in’ smash of a Urei 1176 limiter.

The Tweaker is a 1U, 19’’ rackmount unit that offers one (mono) channel of dynamics control. Provision is made for a second unit to be linked for precise stereo operation, which is useful as many users will want two units to take advantage of the Tweaker’s superb dynamic control capabilities on mix busses and other stereo sources.

The front panel controls consist of eight 21-step pots, making precise recall of settings quick and easy. These controls are augmented by a six-position rotary switch and three push knobs. The familiar options include attack, release and threshold, while other controls are more specific to the unit’s unique features. For example, the curve knob behaves as a combined ratio and knee control, starting with a 2:1 soft knee characteristic and going all the way up to 30:1 hard knee limiting.

Let’s take a look at some of the Tweaker’s more interesting features. The first three controls comprise drive, mix and output. The drive knob is not a simple input gain, rather it affects the signal level going into the VCA (Voltage Controlled Amplifier). At modest settings, the unit provides a clean signal with minimal distortion, while dialling in more drive produces more dirt and grunge.

One of the problems that arises from distortion generated by conventional input gain controls is that the transients can be blunted, robbing the signal of its punch and presence. The Tweaker’s drive control behaves differently, so that when the heaviest compression is applied, usually on transients, less distortion is generated, allowing the signal to saturate musically without losing any of its attack and impact.

The mix and output controls are designed to work together to create an unusual take on parallel compression. The output control alters the amount of post-VCA signal sent to the mix control; it’s not a simple overall output level for the unit. It takes a bit of getting used to but pays dividends, as you can control the unit’s output while preserving the wet/dry balance of your processed signal.

The next control in sequence is threshold which, as with any compressor, determines the point at which compression begins. A simple LED is provided to indicate when the input signal crosses the threshold, remaining illuminated until the signal falls below the threshold.

Now for the section of the Tweaker that really sets it apart from any other compressor we’ve encountered, the Sidechain Shaper. This is a series of filters, appearing on a rotary switch, which determines the parts of the signal to which the Tweaker will respond.

The first two options are high-pass filters set at 60Hz and 300Hz respectively. The 60Hz setting is the sort of HPF found on many compressors, allowing compression over a wide audio band while ignoring subsonic frequencies that may cause unwanted pumping artefacts. The 300Hz setting is useful for full-bodied sounds, such as lead vocal tracks and acoustic guitars, which can benefit from some dynamic control in the upper registers, while retaining the character and warmth of the low-mid frequencies.

The Treble Smash setting is an altogether different beast. Designer Gregory Scott was inspired by inserting the distinctive Kush Clariophonic HF shelf-boosting EQ into the sidechain, resulting in an effect that gently rounds off the top end in a way similar to analogue tape.

This feature is excellent for rescuing harsh, brittle audio in the upper-mid and lower-treble regions, where the ear is most sensitive. In this mode, the Tweaker tames the aggression while imparting a nice glossy top end. Of all the Sidechain Shaper presets, Edge Contour is the most distinct; it has its own pot to the left of the shaper switch. This is an extremely powerful tool, utilising both high-shelf and low-shelf filters working in tandem – so, as one shelf rises, the other falls.

Defining the way the compressor ‘sees’ the incoming signal enables the creation of a multitude of effects. For example, by subtly boosting the LF information from a drum or mix buss, the gentle pumping effects can embellish and even alter the groove of the track. Clever stuff. In addition to these shaping effects, the Tweaker also allows for the insertion of an external sidechain unit, such as an equaliser, so that you can create your own preferred tailored compression.

Of course, all of this dynamic control needs to be monitored, and the Tweaker’s LED meter is yet another unique feature. The proprietary Tri-Meter is like no other, showing the input signal, output from the unit and gain reduction simultaneously. It takes a little getting used to, however once mastered it allows quick assessment of what is occurring within the unit.

That being said, the meter does not show input, output or gain reduction readings in dBs, instead using a green, yellow and red display to show how hot the signal is or how much it’s being squeezed. In fact, none of the controls use numbers to indicate levels or response times.

You just need to know that with, for example, attack and release, counter-clockwise is fast and clockwise is slow. This is no bad thing, as it encourages engineers to listen rather than try to dial in familiar settings. There are many of us who believe there is far too much visual distraction in modern sound recording; your ears should tell you everything you need to know. As the legendary producer Joe Meek once said: “If it sounds right, it is right.”

We spent a great deal of time with the Tweaker in order to get to grips with its many functions and were astounded time and again at its versatility. Everything from the gentlest, transparent levelling to full-on curve-bending squelch was achieved. We even strapped the single-channel unit over a stereo mix buss, first processing the left channel then, using identical settings, the right channel. This certainly isn’t an ideal arrangement, because all sorts of phasing issues and other nasties could arise. However, the results were superb with no unpleasant artefacts.

Don’t be fooled into thinking that the Tweaker’s wide range of styles and applications makes it a jack of all trades, it isn’t. Rather, it’s a master at recreating the behaviour and characteristics of many highly-rated designs. And like many of those designs, it possesses a lovely musical heart, so that just by simply running audio through the unit, with little or no processing, your signal will gain some euphonic enhancement.

We have just one slight gripe: our review unit arrived with one of the control knobs detached from its spindle, and although the unit feels good in use and utilises excellent internal components, it doesn’t look or feel as bomb-proof as many other pieces of hardware we’ve used.

The coffee and cream colour scheme is a matter of personal taste; however, it does contribute to the rather plastic look of the unit.
Aesthetics aside, the Tweaker is a remarkable unit capable of a multitude of dynamic effects.

This is no fit-and-forget compressor, so users will benefit from spending some time getting to know exactly how powerful and diverse it is before putting it into professional use. We were dazzled by the vast range of compression and limiting styles on offer. Most often, one unit will excel at certain types of dynamic control, while falling flat at others. The Tweaker not only does every style of compression you can possibly think of, it also does them all brilliantly.

Alternatives
We are not aware of any other hardware compressor that is capable of the numerous compression styles that the Tweaker offers. One of our recent favourite compressors is Warm Audio’s WA76 (£499), which is a faithful recreation of the legendary Urei 1176 limiter. Often used as a vocal compressor, its classic ‘all-buttons-in’ mode also provides a heavily smashed sound.

In Use
For a great vocal sound, try the Tweaker’s take on the classic Teletronix LA2A leveller. Dial in a good level of drive – about 75% – and set the mix to fully wet. With the threshold set at 2 o’clock, use the unit’s unique edge contour, notching it one step to the left of its central (flat) position.

Set the attack control to medium-fast and make use of the unit’s dual-release option, which gives a fast release initially, followed by a more relaxed release. The result is lovely, transparent vocal levelling with plenty of presence 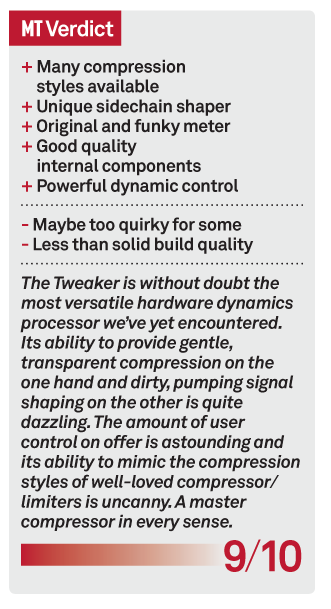