More studio hardware means more compact mixers, and luckily the market has become so competitive that prices are low and feature sets are high. Andy Jones looks at the Kinsman range from JHS, which features enough inputs for small to medium studio set-ups, plus onboard effects, at very attractive prices… Details Price KM8FX: £159.99 KM12FX […] 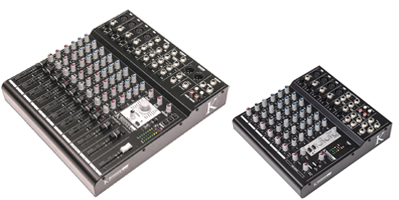 More studio hardware means more compact mixers, and luckily the market has become so competitive that prices are low and feature sets are high. Andy Jones looks at the Kinsman range from JHS, which features enough inputs for small to medium studio set-ups, plus onboard effects, at very attractive prices… 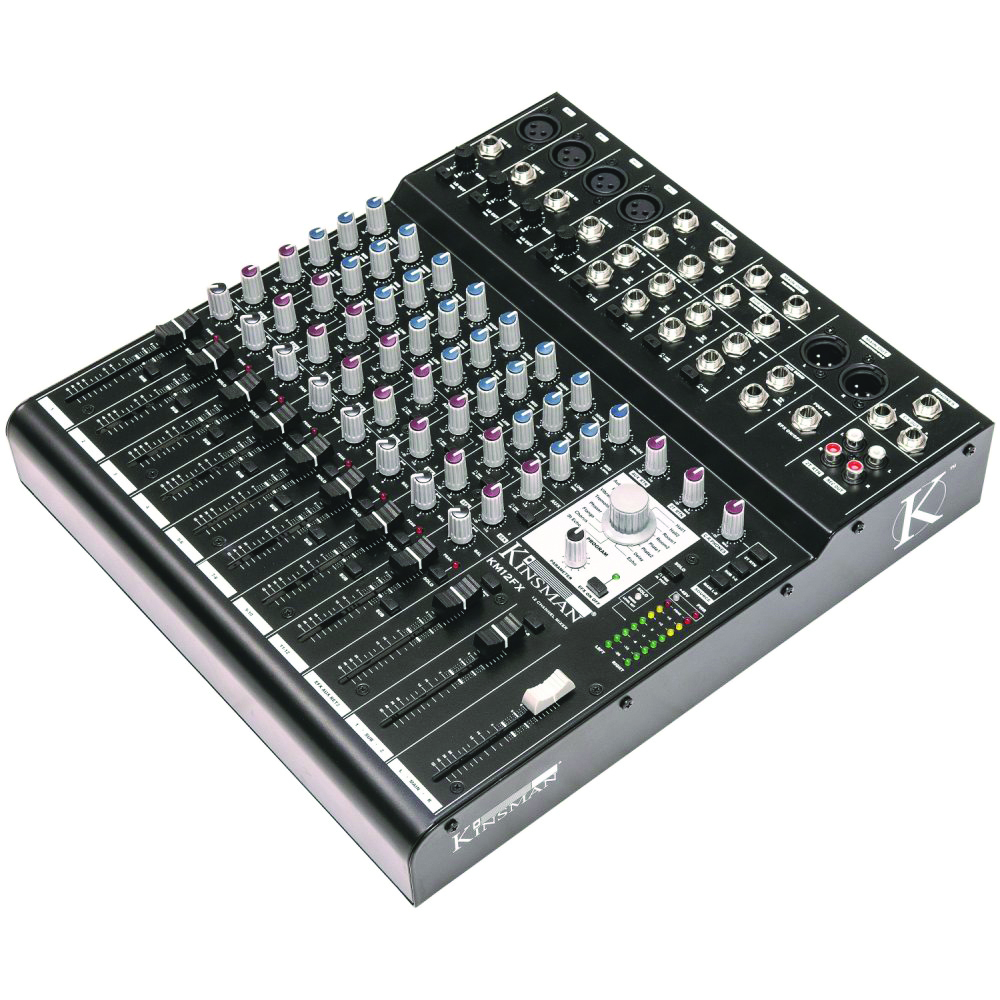 If you had had the dubious pleasure of meeting my 2003 self, as well as wondering what it was that was growing on his chin, you’d never have heard him predict that in the space year of 2015 he’d be looking at so many mixers.

Back then, he’d have been marvelling at how everything could be done on a laptop (although, if memory serves, it was a Sony Vaio the size of a small Tesco, that just about ran four plug-ins) and that studio hardware was dead and buried.

How hasty and quick to write off an era of studio history that young pup was, because the computer route, nice as it was, didn’t take into account the tactility of hardware and the need to not stare at a glowing screen while creating.

The last five years has seen a boom for studio hardware, and it’s all colourful, crazy, beautiful and glorious to use.

That means the return of the mixer. And what a return… 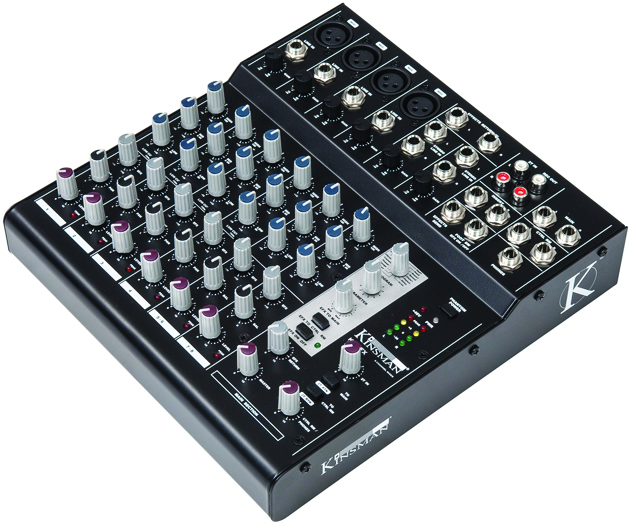 More Types, More Mixes
Of late, I have looked at all sorts of compact mixers for many hardware mixing roles: from the very modern studio mixer, in the form of the rather superb Soundcraft Ui16 (a soft/ hard combo mixer), to the Yamaha AG series, ideal for singer/songwriters and podcasters alike.

It’s not, then, just a return to hardware that has seen a revival for mixing, but also the need to mix for different tasks: audio mixing Youtube videographers, the aforementioned podcasters and a million folk guitar wannabes all need good solid mixers for their endeavours.

And the new Kinsman KM series could be just that: good, solid and very old-school with a couple of extra new flourishes.

Inputs Inputs
We have two on test: the KM8FX and 12FX, and initially you might think it’s just a case of extra inputs for the 12. Indeed, I’m concentrating on the larger one, although there are some fairly significant differences.

You get an extra pair of stereo inputs on the 12FX, an extra Aux send to bring in external effects, sub outputs, faders rather than rotaries for level, solo buttons and peak LEDs. Otherwise, the mixers share four mono ins (with XLRs), a stereo set of ins and plenty of effects action.

Alternatives
I looked at the Mackie Mix series a few months back. They offer incredibly cheap analogue mixing, also in compact and sturdy boxes, with similar routing and features. 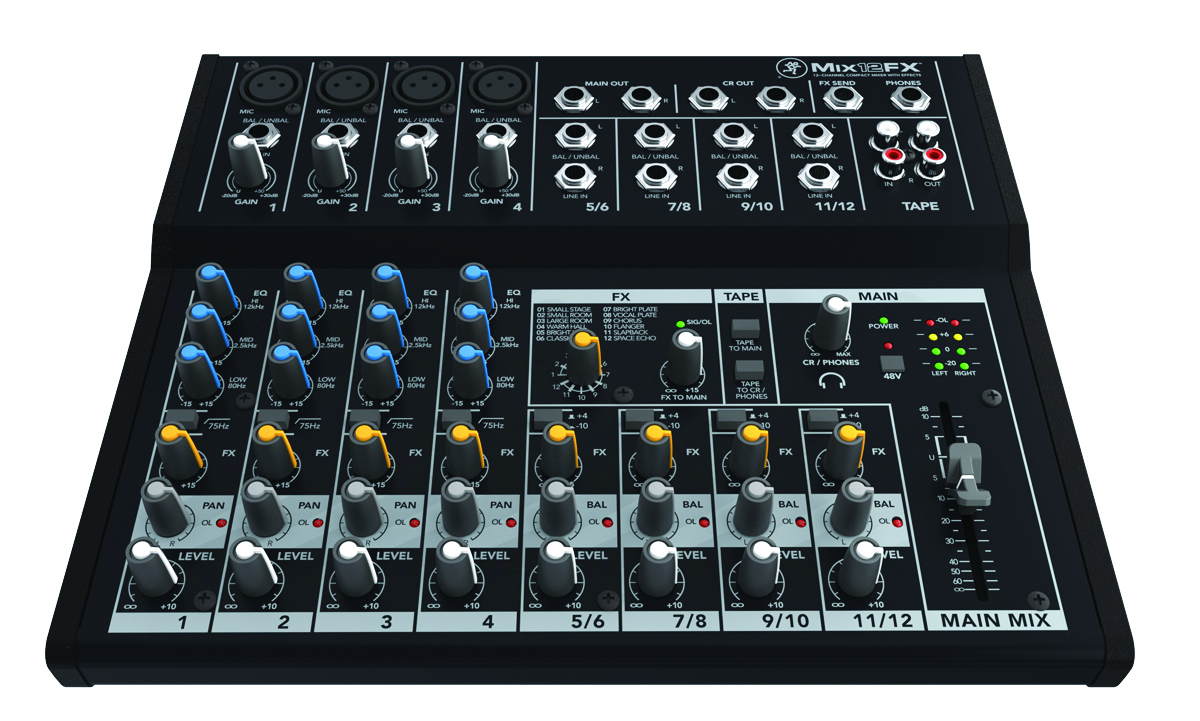 If you want added USB for a similar price, I also looked at the Alto Live 802 a while ago which, while less compact and a little noisy, does also feature USB and longer faders for just £169.

In Use
Both mixers boast a sturdy feel and are heavy enough to feel robust for live use. Certainly, the 8 will slip into a bag with ease for small and intimate gigs. Controls feel good, not cheap, and there’s no looseness on the faders on the 12, nor rotaries on the 8, helping with more precise level-making.

Both mixers are also solid desktop units – they’re not going to move around too much within your studio setup next to your computer.

And while they can certainly help bring your analogue gear within reach of your computer environment, do consider that they don’t have USB capabilities so don’t act directly as interfaces to your virtual environment – these are standalone mixers, not interfaces.

Noise levels are pretty good – sure, you get hiss when you push it, but in general use the mixers are quiet. I found the EQ bands to be very useful and dramatic when required – more so than the onboard effects. 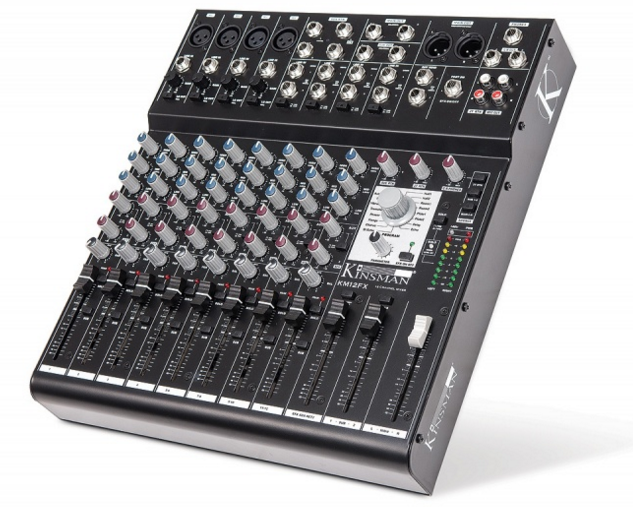 The lower registers punch at higher levels, and you get an extra boost or cut with the lo cut control on channels 1 to 4. The mids are very in-your-face, while the highs are just the right side of delicate.

The effects are a little more subtle than I was expecting. Very often, effects on cheaper hardware are brash, but these are a little too understated and the single parameter knob that controls a main level within each doesn’t help by being an endless rotary, because you never really know where you are.

The only other slight niggle was that the faders on the test unit were slightly physically out when unpacked, and needed to be clicked into place – not a big deal by any means, and they performed perfectly well in the test.

Conclusion
The Kinsman 8FX is significantly smaller and lighter – about 2/3 of the footprint of the larger model – so if you need ‘compact’, do consider it. £110 extra for the added bells and whistles the 12FX gives you is not an insignificant cost at this level of budget, but we think it is worth splashing out on if size and weight is not such a factor.

You never know when those extra inputs will come in handy, and we certainly do prefer proper fader action over rotary dialling any day.

Overall, then, using both mixers offers a very clean and sturdy mixing experience, and certainly one that doesn’t feel as if it costs as little as it does. Both come highly recommended to those on a low budget with small-to-medium mixing needs 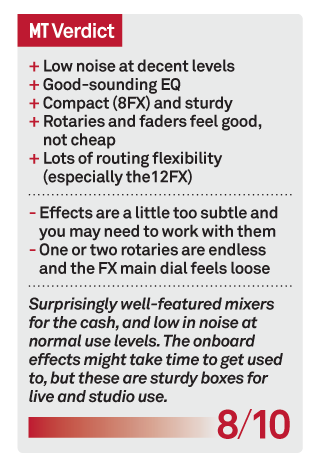