By recreating the sounds from 38 classic synths, Syntronik promises all of your electric dreams in one package. Is it too good to be true? 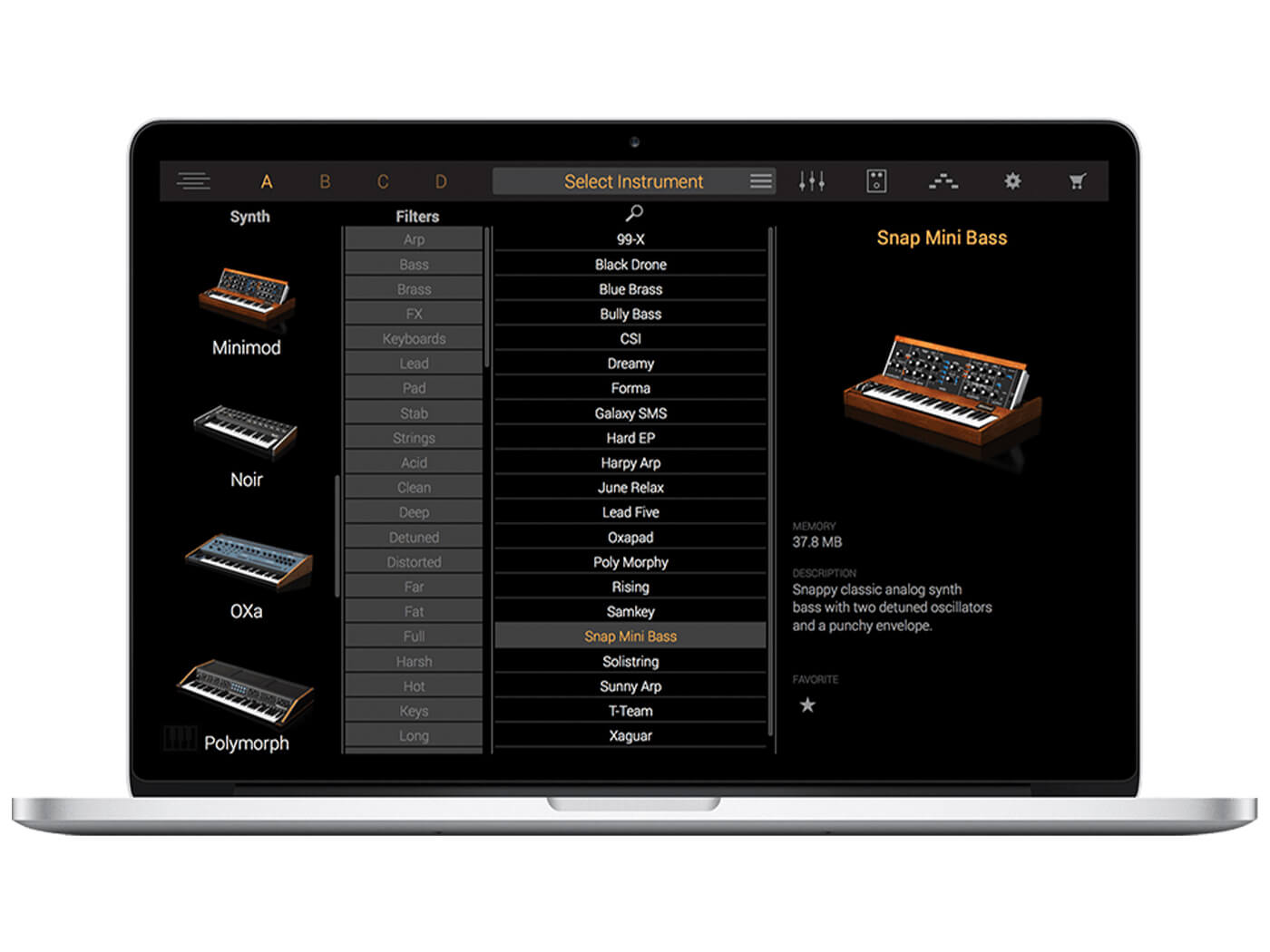 The hunger for the sound of classic synths seems to be stronger than ever. So many companies are either emulating them in software or recreating them in hardware and we all lap them up, in all shapes and forms: soft, hard, brand new or second-hand.

Whether it’s the continued popularity of EDM or the revival of 80s soundtracks that’s to blame, everyone from the original innovators to the young software upstarts are cashing in on the synth – so models from the likes of Roland, ARP, Moog, Yamaha, Korg et al have been recreated more times in software and hardware than perhaps they really deserve.

This latest collection from IK Multimedia is doing just that, but slightly differently as well. There are the usual synth suspects – Junos, Oberheims and Moogs all named in that way that I hate, slightly close to the original, so you get the reference – but there are some more modern entries, too, including emulations of the Alesis Andromeda and PPG Wave that perhaps set this collection apart from others. There are 17 instruments in total and you can buy them individually for 50 Euros a go, or the lot for around €300, so not bad on the face of it.

As is perhaps becoming normal, you create an account at the company website, buy your licence and download, in this case, synth by synth (or in rarer cases, up to three per synth). It’s a hefty 50-plus GB for the lot, although as I’ve just reviewed two pianos at over 50GB a pop, that doesn’t seem overly excessive for 17 instruments.

So what do we get?

Okay, I’ll forgive IK with the naming thing, as the company does specifically cite which classic synths each of its Syntronik instruments is attempting to emulate. Here, then (deep breath) is a list of those instruments and the synths each is based on.

So that’s 17 instruments, covering a total of 38 synths.

A single one-click operation would’ve been nice, but after you’ve downloaded the 17 instruments, you then install them wherever you want (handily, an external drive for me). This isn’t a quick process, as you have to install each one – which might sound very ‘first world problem’ but is a faff.

The instrument runs standalone, or as a plug-in. I tested it within Logic and found that it was rock-solid and actually fitted in with Logic’s aesthetic well. The main GUI lists all 17 instruments on the left and you can hone in on your sound either by selecting one or more of these instruments or by way of five filters in the middle of the screen.

So there’s plenty to get you to your sound very quickly and, while some of the sub-divisions do sound a little nonsensical, they do really help you navigate through those 2,000 presets. 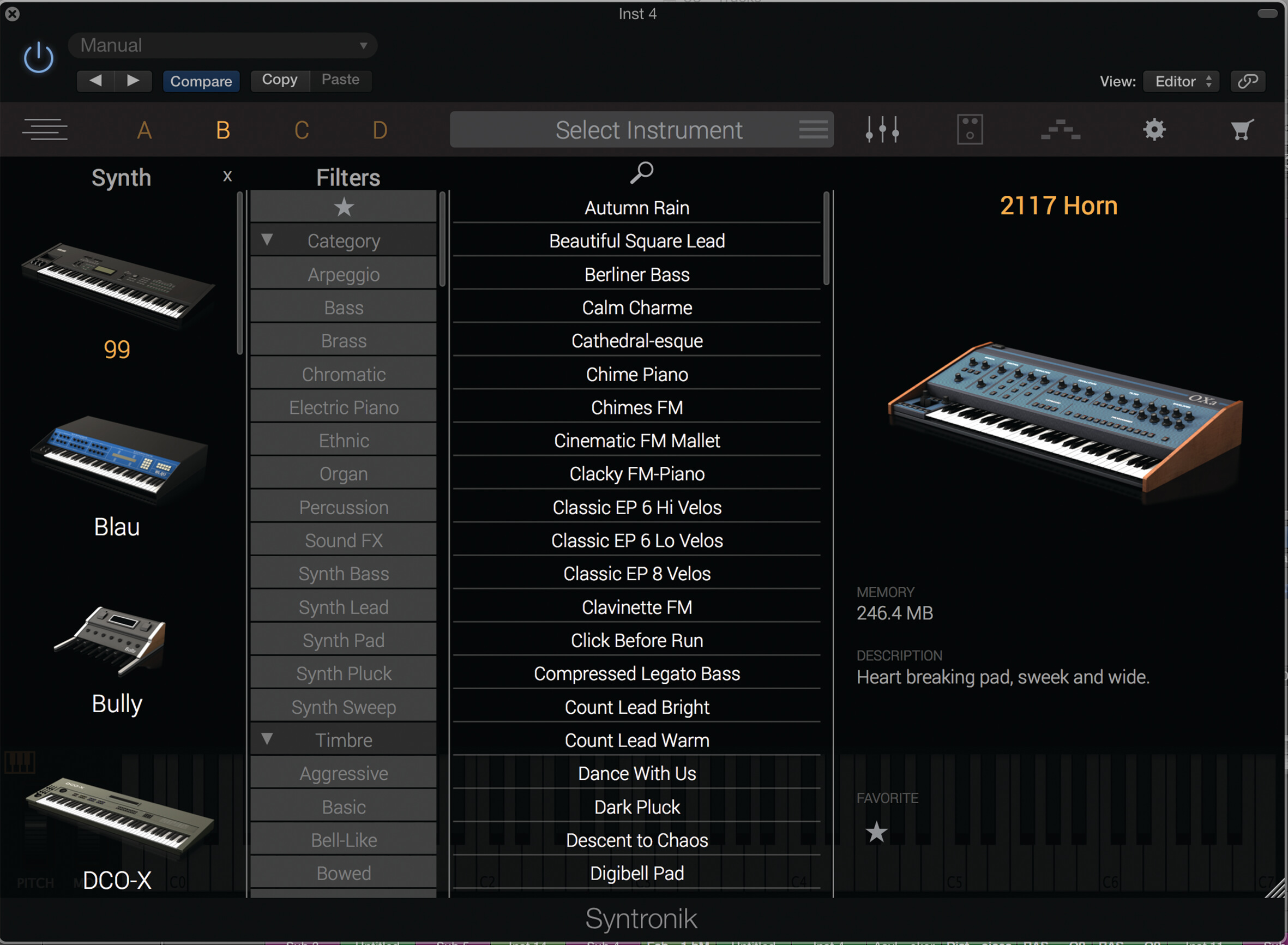 1. Main screen – Your 17 instruments are shown on the left and you can filter down to your chosen sound with five categories, which expand into further choices. 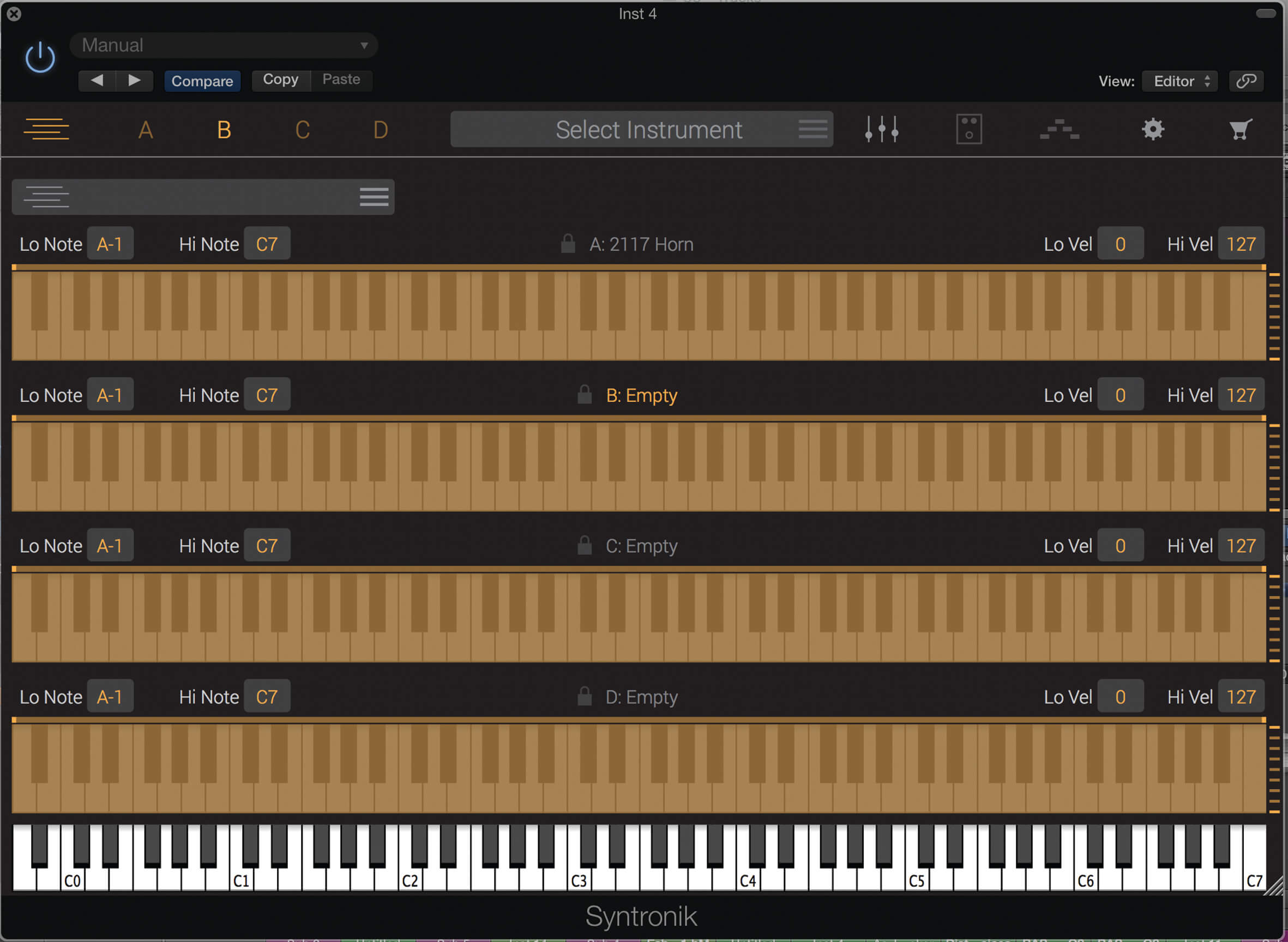 2. Layering – Syntronik’s layering feature is its big plus point. Layer four presets together and split keyboard ranges for the ultimate in sonic flexibility. 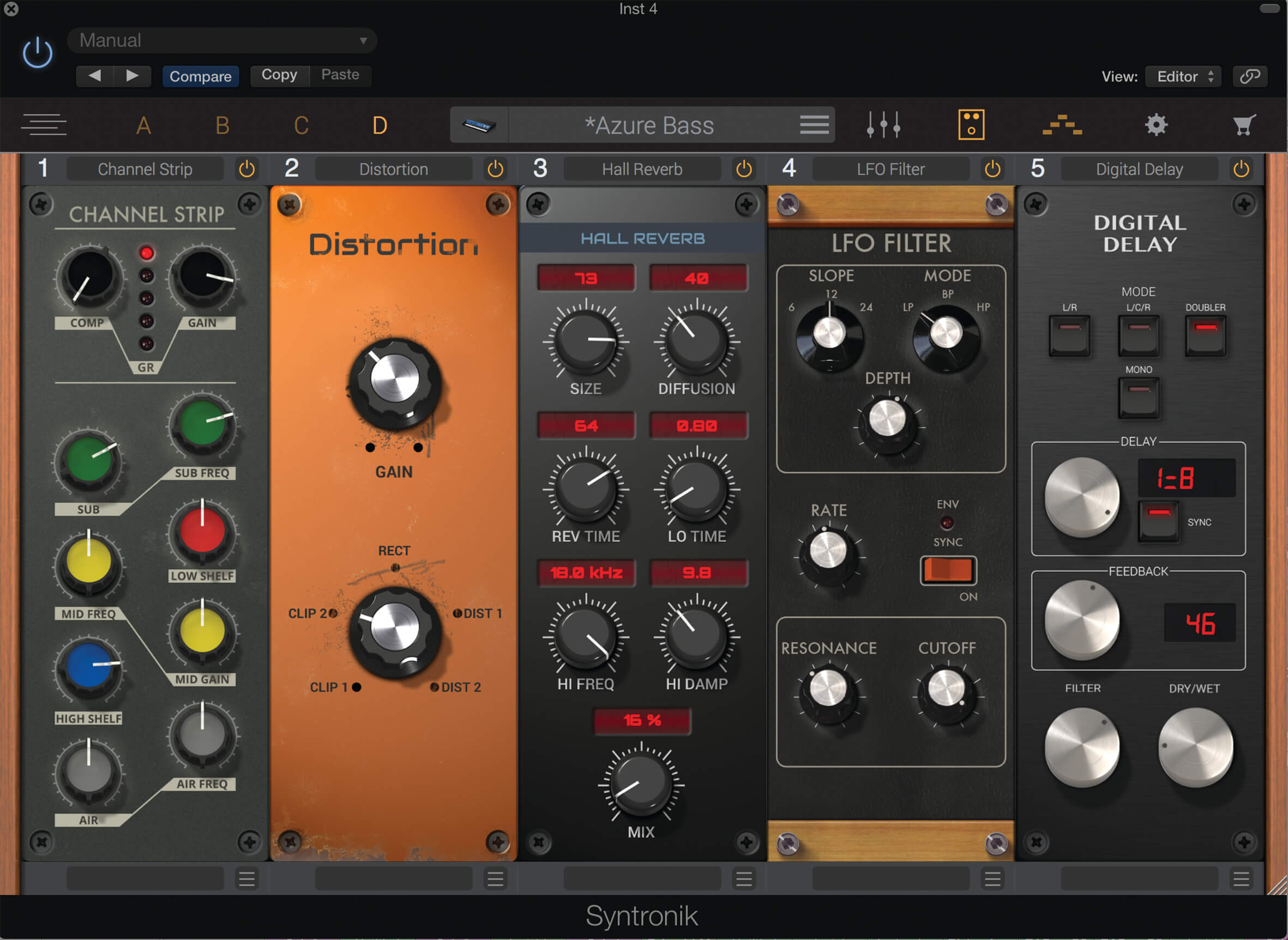 3. Effects – The effects, lifted from other IK apps, are also great – and can really let you mess with your synth sounds… 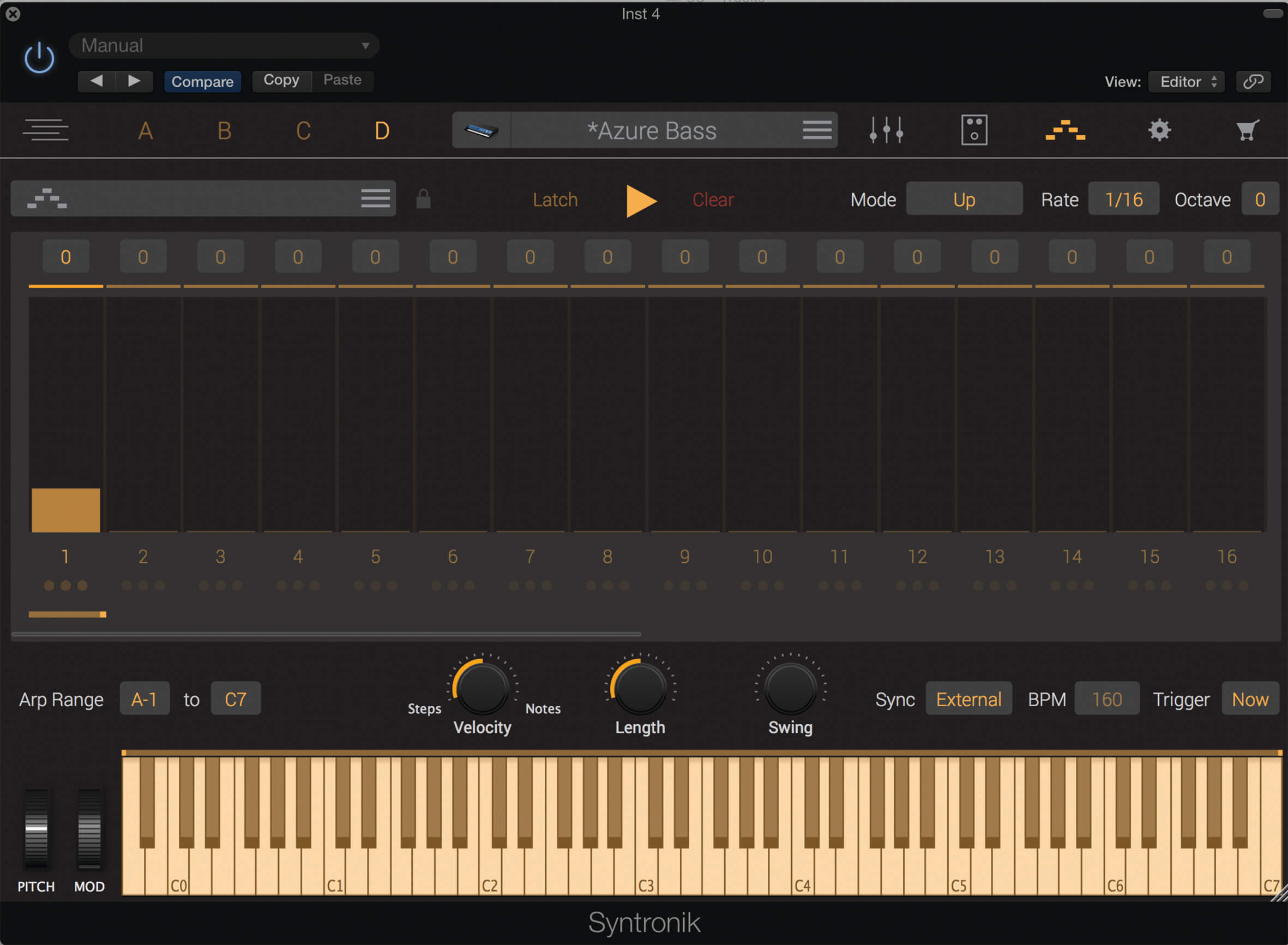 4. Arpeggiator – You get up to 32 steps to play with in the Arpeggiator – which can be applied to all four layers – and you can draw in the velocity of each step. 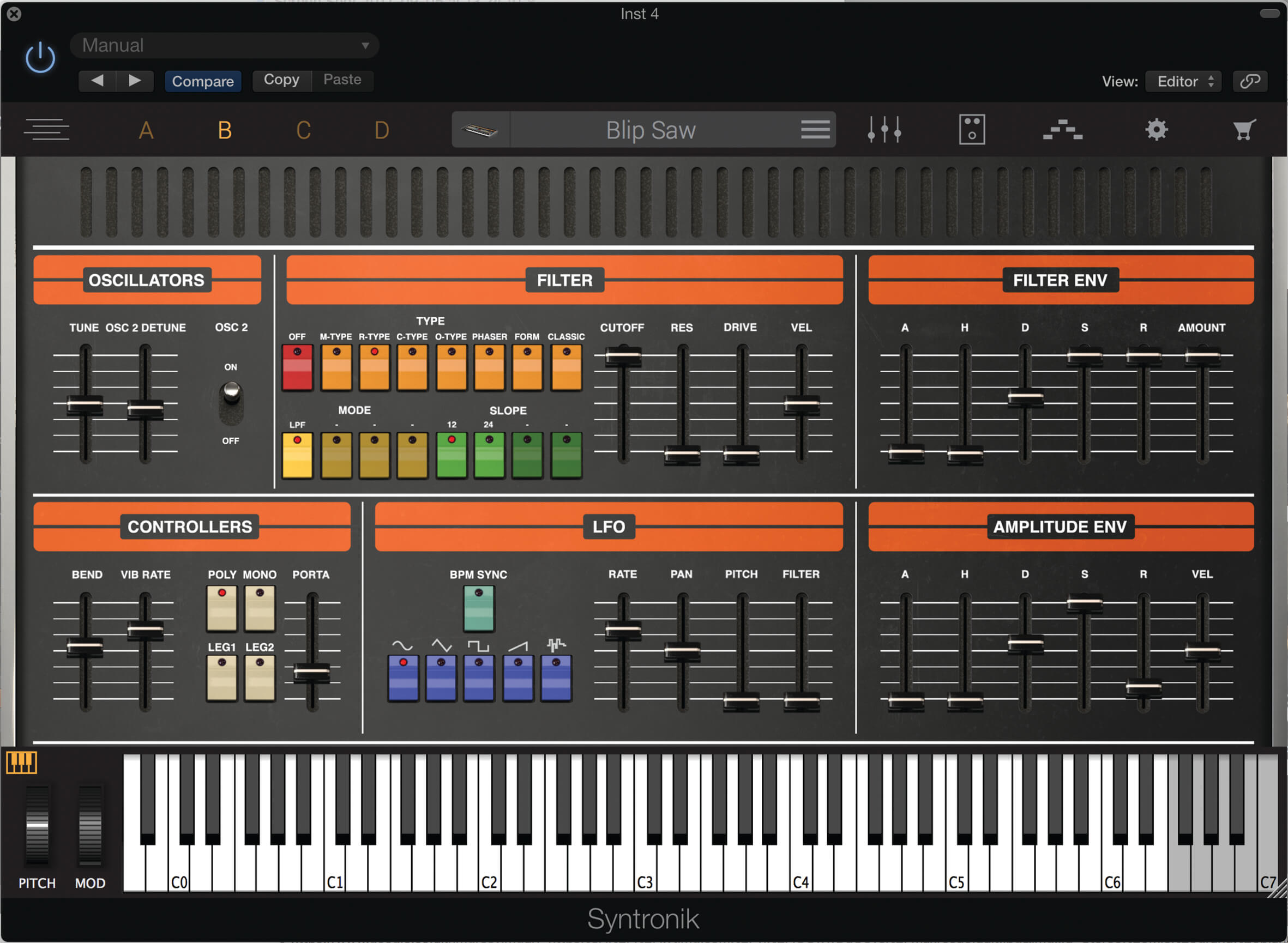 5. Classic synths… – Syntronik is all about the classics. Even though they’re not named directly, IK is open about which synths it’s emulating. Here’s the Jupiter-8. 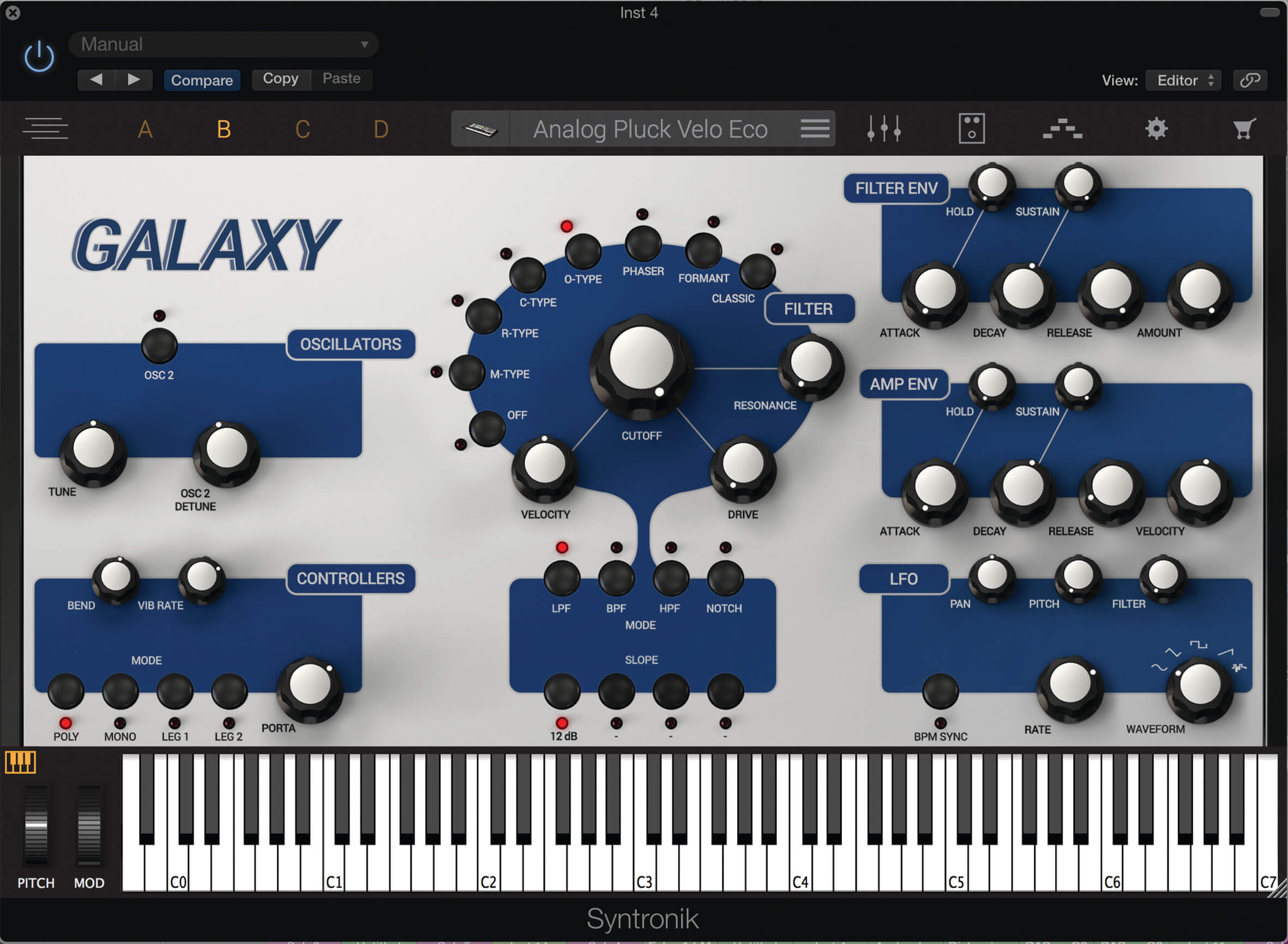 6. …and some newer ones, too – But the great thing about Syntronik is that it includes some newer synths, too, like this: a cut-down emulation of the Alesis Andromeda.

So – to the sounds

To give you a flavour of all the sounds is pretty impossible, so I’ll pick out some of the instruments and try and give you a broader idea of each’s character.

Blau offers everything from soothing pads to biting leads, with some digital bells and whistles along the way. It’s probably the most varied-sounding instrument in the package, based as it is on the rather schizophrenic PPG Wave. Bully, on the other hand, is probably the most narrow sounding; it’s all about the bass, low and slow, some leads and pads, but mostly short and to the point.

DCO-X has a surprising amount of pianos and digital attacking sounds, plenty of pads, too and the odd tearing lead. Galaxy is probably the most interesting instrument and hardest to categorise, as was the Andromeda it’s based on.

There’s everything in there: big, bold leads, smooth pads – maybe I’ll leave it up to the preset Gargantuan Bigness to describe it. Harpy 260 is all about analogue, but updated for today’s dance styles, loads of arpeggiations, loads of attitude. J-60 is a polite analogue synth trying to be dirty and not always succeeding, a little like your dad dancing. J-8 is a little classier; lots of strings, pads, organs and leads, not trying too hard to be contemporary.

Minimod is sweeps, leads, pluck and basses and a good variation thereof, while Noir contains lots of interesting evolving sounds and arpeggiations – instant one-note tunes. Polymorph is perhaps the opposite of Bully, its more varied, interesting cousin, demoing the other side of the Moog sound. Pro-V is full of classic-synth sounds, but lots of varied arps, too, while SAM demonstrates the biggest dynamic in terms of sounds, with deep fat bass and in-your-face leads and pads.

String Box isn’t just a box of strings. While there are plenty of them, you also get pianos and some sublime organ sounds, too – just check out Organ Delayed Bass if you can. T-03 is everything you think it is, though, lots of squealing acid, loads of dance bass.

Finally, V-80 and 99 deliver all the Yamaha sounds you could wish for, 99 being especially welcome as it offers a great digital contrast to all of the analogue that has come before it.

I should mention the interfaces just about now. While it’s fair to say that you don’t get the complete synth controls you’ll have found on the original machines (remember that some of these are based on multiple machines, anyway) you do get some big parameters – filter, resonance, envelopes – to tweak. This is far more than just an old-school sample switching ROMpler – it does a lot more than that, which leads us nicely to…

If you have a stack of plug-in synths already, or are perhaps a Logic owner that has the huge bundle that comes with that software, then you probably don’t technically need Syntronik. But the fact that you get so many different synths, oodles of presets and sonic flexibility does make it an attractive package, whatever your situation. 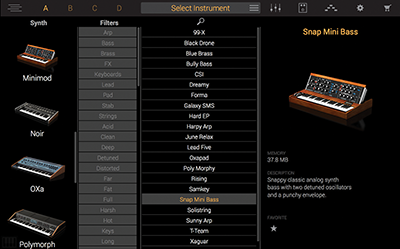 Perhaps consider the individual synths to plug in any gaps you have… and if you have absolutely no synths and are after a good variety and quick-fix solution, it’s a no-brainer.

Phew! So that covers the sound and I think you’ll agree that you get something of everything. And you might think a collection like Syntronik lives or dies by those sampled sounds, but you’d only be partially correct, as they are only part of (albeit a big part of) the story.

Where the software excels is with what you can do with that source material. The first is the layering feature that can have up to four presets layered together or split across your keyboard.

This in itself breathes life into just about everything you do, as each layer can have its own arpeggiation. I’d have criticised the lack of preset options here, but as I write this, my email has pinged with the news that IK has added 300 multi presets to the package you can download for free. 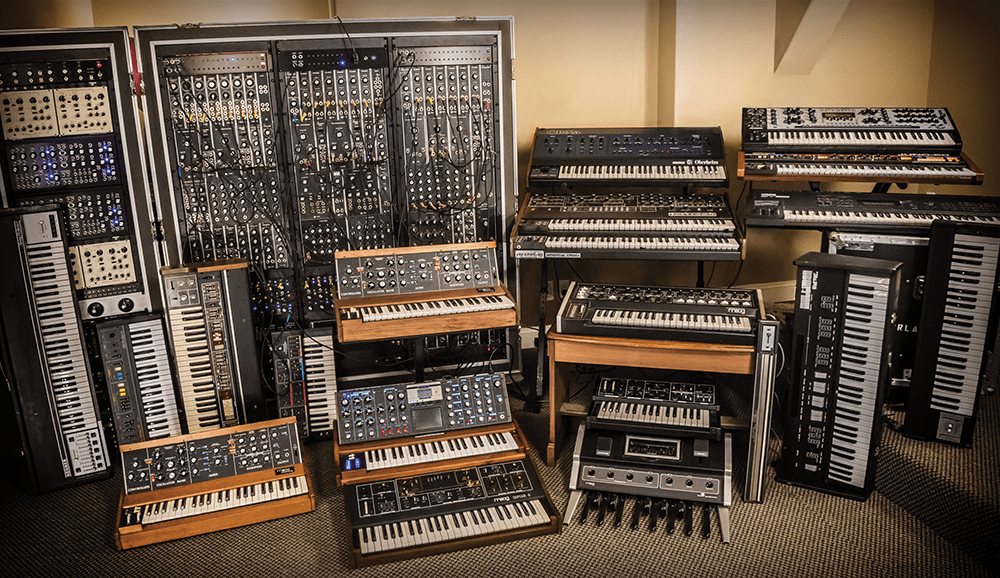 These are great and really show off the true sonic capabilities of the synth. You might be attracted to it as a vintage-synth emulator, but what happens when you layer these sounds and arpeggiations together is that Syntronik will take you intonew and unexpected sonic territories.

This is also helped by a bank of up to five ‘lunchbox style’ effects per layer. IK knows a bit about effects and these are derived from its T-Racks and AmpliTube effects boxes, so the quality is great. You get some really useful virtual boxes that can take you into more unexpected areas and away from the vintage vibe.

There are 38 to choose from, including Reverbs, Filters, Modulation and Dynamics/EQ.

Finally, on the main features front, is Drift – which offers some of that old-school oscillator wobble that those old analogues gave you when their oscillators drifted out of tune. Importantly, this is not just in terms of the pitch variation from one another, but more about overall phase and colour.

However, it’s the tuning that you’ll probably turn to for those big stacked leads, and then if you put four of those together using Syntronik’s layers, you can end up with some incredibly huge sounds.

Aside from the installation, there’s not much bad to say about Syntronik. Occasionally, you do get confused as to which layer you are in and it’s easy to select too many synths at the same time, but that’s really a minor point. And I could criticise the lack of synth controls as you can always argue for more, after all, but what you do get is probably enough for most people – maybe IK has also left some wiggle room for an update there.

Anyway, there’s enough to do elsewhere in the pack if you want to mess with the sounds supplied. The 38 effects are superb and sound as great as they look, all racked up against each other. Among my favourite inclusions in Syntronik, though, are the digital synths, which are perhaps now being looked at in as high regard as their analogue forefathers.

I guess we’ve had so many years of worshipping those classic analogues that it’s about time the digital wavetables of the 1990s should be reappraised. While I don’t particularly want to see a full-on digital revival as such, it’s good to have some variation on top of the usual analogue bubble and squeak in Syntronik.

Perhaps this is where Syntronik v2.0 will lead us – on a sonic adventure that takes us further into the 1990s (God help us if it goes too far down the rave line).Overall, then, I like Syntronik a lot. It ticks pretty much every synth box you could ask for. Electric dreams indeed. 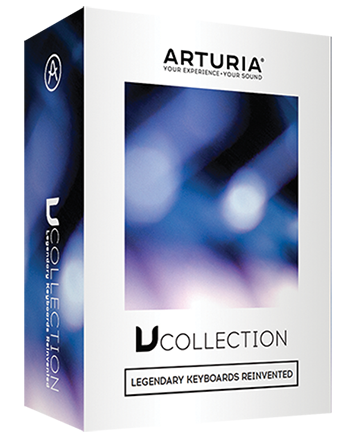 The collection has 17 instrument,s but the ante is upped with 5,000 presets. You get more strings and pianos among these varied virtual instruments, but there’s plenty for synth heads here, including the Jup-8 V, ARP 2600 V, CS-80 V, and Prophet V. 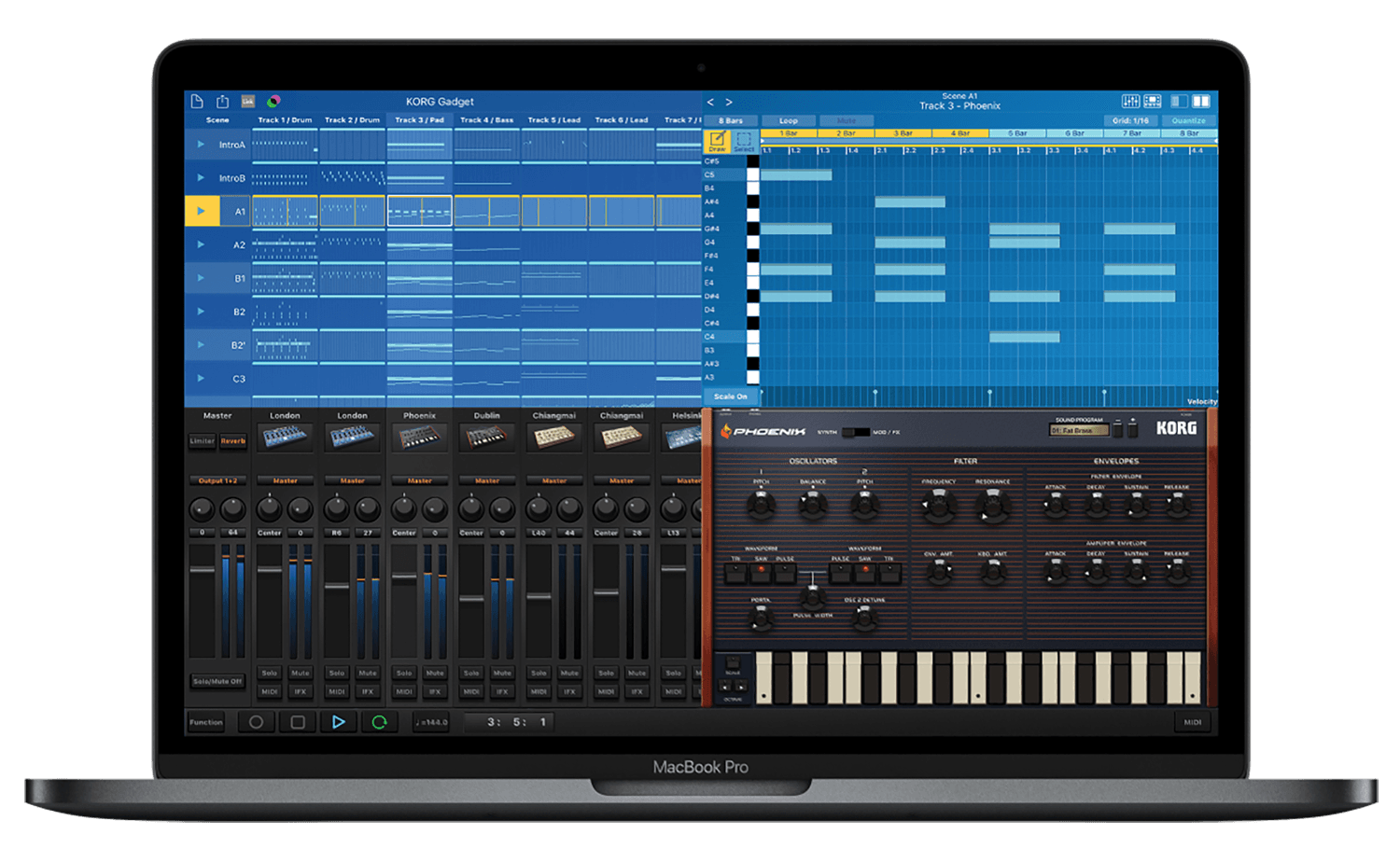 It’s a collection of synths so you could call Korg’s Gadget a contender, too, although it comes with its own DAW. It revolutionised music making on an iPad and now you can get it for the Mac. That version is expensive, at $299, but the iOS version is just £38.99.