Bridging the gap between traditional cinematic, orchestral strings and something otherworldly, Novo boasts plenty to get excited about. Dave Gale gets modern with this new string offering… 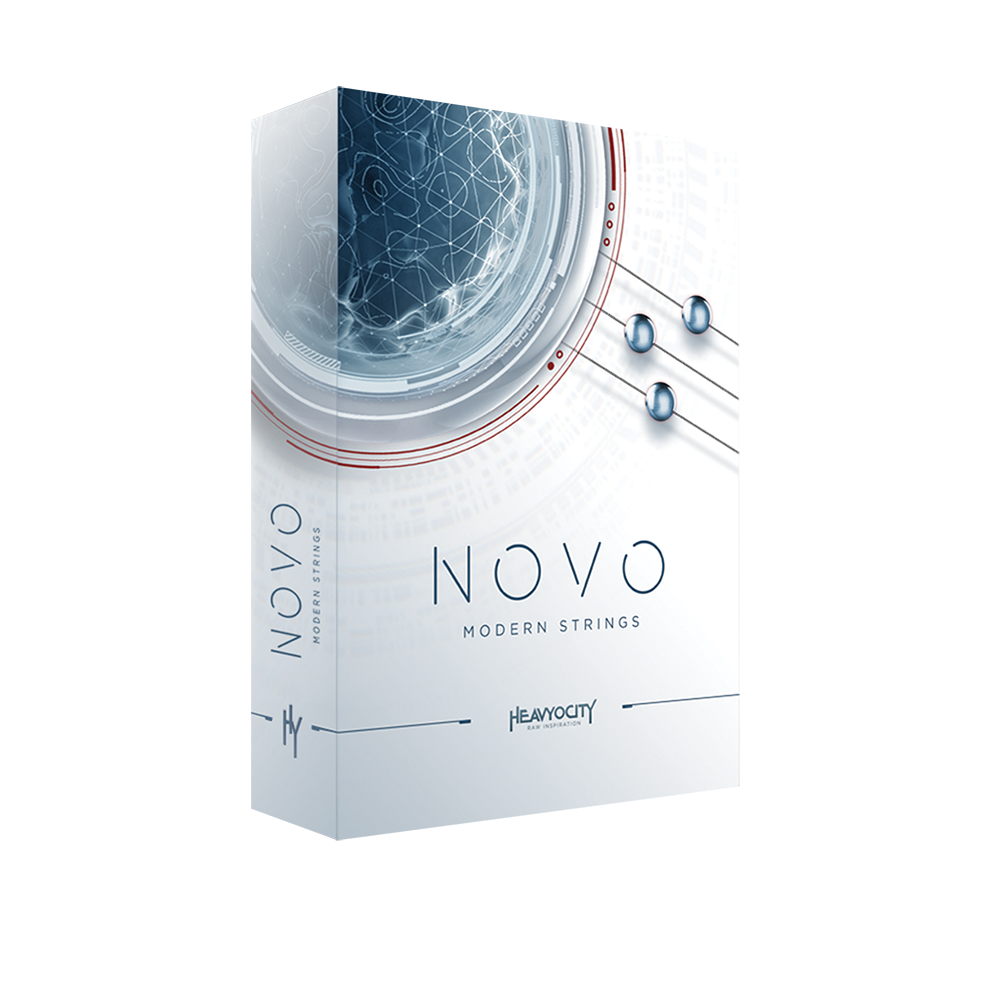 Have you ever had that feeling where you’ve spent your hard-earned cash on an orchestral library, and it left you wanting more? It’s a familiar complaint from many a composer, and largely, at least in my view, to do with the descriptions offered on the box, or download page, and how well the samples measure up. Well, there’s no such complaint with this great new library from Heavyocity, which tells us right from the outset that we have a full set of strings, in two camps.

The first set of patches that the user is offered shapes up firmly in the traditional camp, offering full and individual sections of Violins 1&2, Violas, Cellos and Basses. The articulations on offer are the usual suspects of long, legato, tremolo, spiccato and pizzicato, with the lower instrumentation offering further interesting patches, such as clusters.

The starting point for this library is a beautiful set of captured samples, recorded at the legendary Eastwood Scoring Stage at Warner Bros. Studios in LA, which gives an indication of the timbre on offer. In common with other US-based libraries, the strings feel bright and close, but by using the onboard FX, it’s very easy to melt the timbre with some use of either reverb or delay, or explore the three recorded mic positions.

There are some clever and intelligent round robins in use, which can be monitored from within the Kontakt instrument itself, and I was delighted to see this monitoring extending to both up and down bows, with the ability to control various aspects of repetition. This works well, although I found myself looking at the RR display quite a lot; think of it as a new gadget in the sample-library world. I’m sure the fascination will wear off after a while!

The legato patches felt convincing, albeit a little fast at times, but it was refreshing to see various components ripe for editing, from the nicely designed graphical interface, right to the instrument. EQ and envelope control are a case in point, the latter being particularly useful if you only have Kontakt Player to work with. There is also a full-blown resonant filter available here, should you wish to adapt your strings or make them whistle with resonance.

Apart from the individual sections, High and Low patches offer further interesting tidbits, with the High Textures patch being particularly great for all manner of bends and randomised bowing. It’s all very useful stuff, complete with the usual dynamic control from the mod wheel of your controller.

Where the Modern part of this library really springs to life is with the Evolved section, which offers two levels: the String Designer and the Loop Designer. Starting with the former, the instrument layout is a little different from the Traditional patching, offering elements to create movement, timbre and rhythm from the vast array of included raw sample data.

In essence, the building blocks of a patch are created by selecting up to three samples, which can then have a number of effects and processes applied to them, either individually or as a whole. More usual controls, such as envelope control, EQ and filter, are to be found to the left of the central Macro dial, and you’ll find Drive, Gate and Space occupying the right-hand territory.

Diving into the gating (by simply clicking on the word Gate to gain access), within seconds, I had strings gating, but with a very nice level of easy control and immediacy that is refreshing in a Kontakt instrument of this kind. Once accessed, the numerous controls relating to your chosen edit palette are displayed at the bottom of the instrument, and there’s quite a choice of things to work with.

My only gripe here is that I found the On/Off buttons to be a little small, and hence it was not always obvious to me that something was inactive, which had me clicking and wondering why things were not in play. But as I got used to the interface, this did not continue to be any great issue.

Going back a step, the actual selection of the raw samples is a breeze, with the three sample choices being displayed in the upper part of the instrument. Selecting a sample is as simple as clicking on the sample name, and up pops a menu-driven sample-selection page, with some handy shortcuts, in the shape of auto-preview and auto-loading.

There’s quite a wealth of choice here, from the Traditional samples mentioned before, to a large collection of processed pads, bearing in mind, of course, that with manipulation will come far more processing. So starting with something more traditional could give rise to something very processed, and there is plenty of colour available to entice you in and inspire. 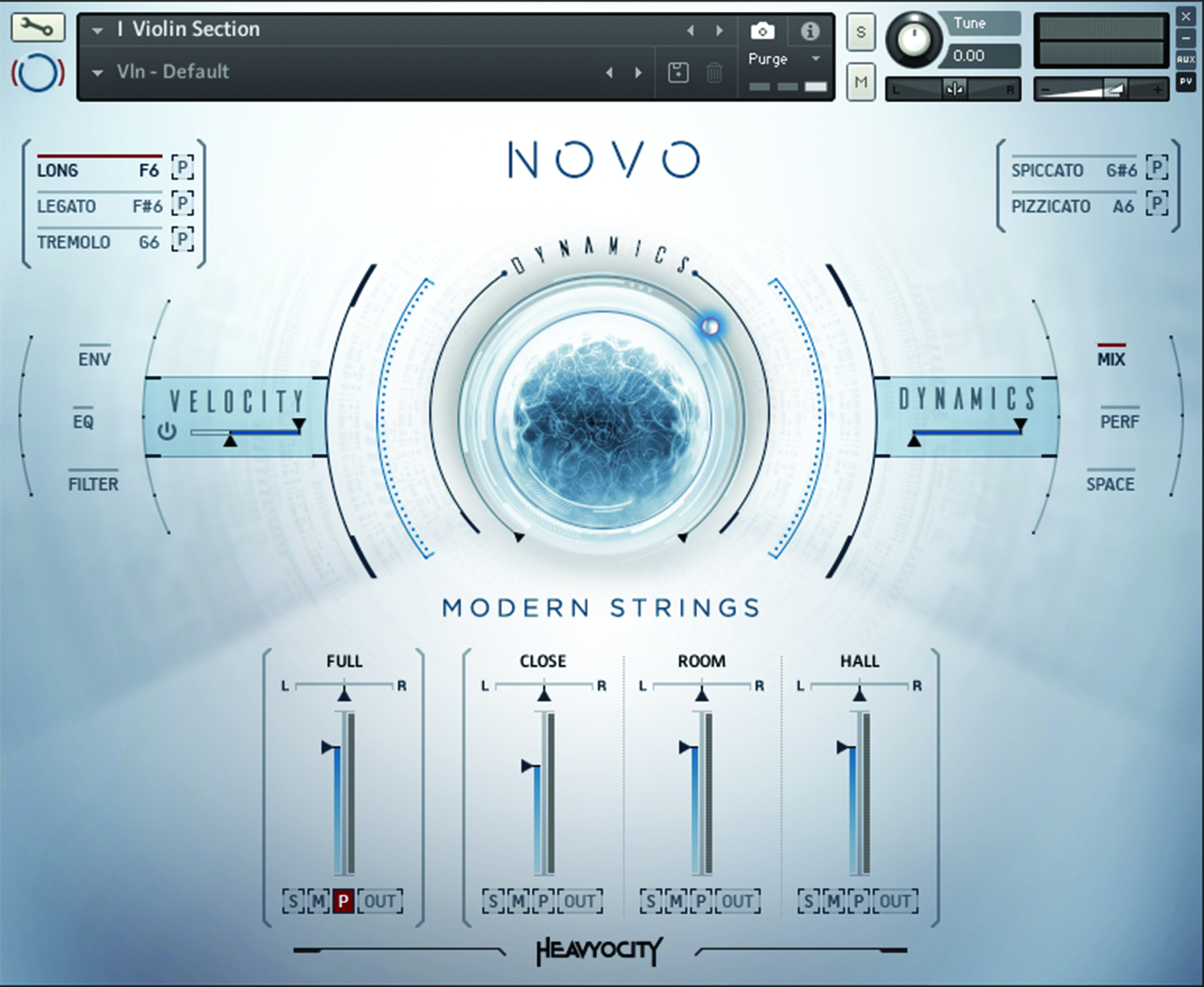 Novo with the traditional and familiar setting of orchestral strings, offering full control over basic elements 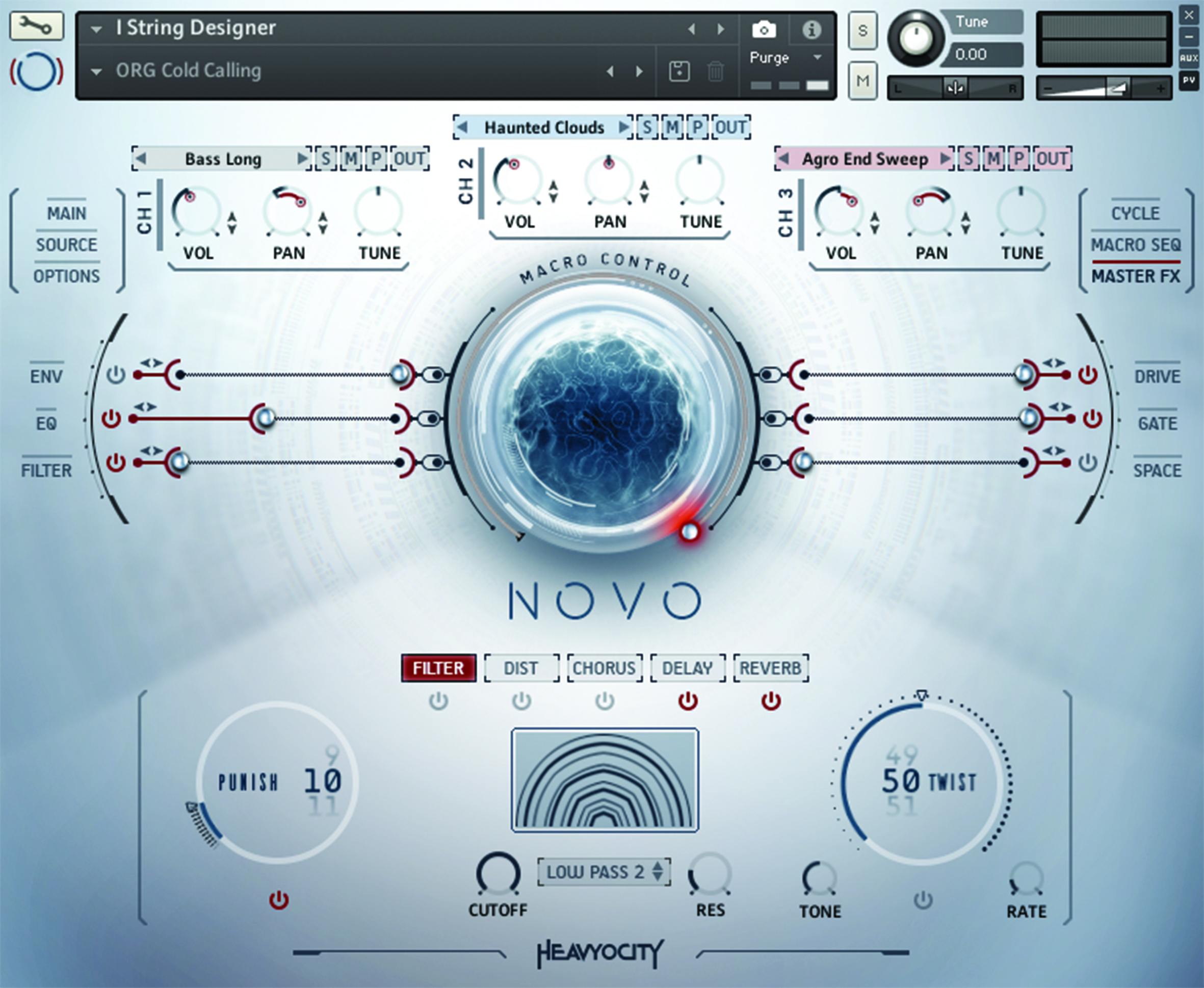 In String Designer mode, the three layers of timbre become available to elements of sound design 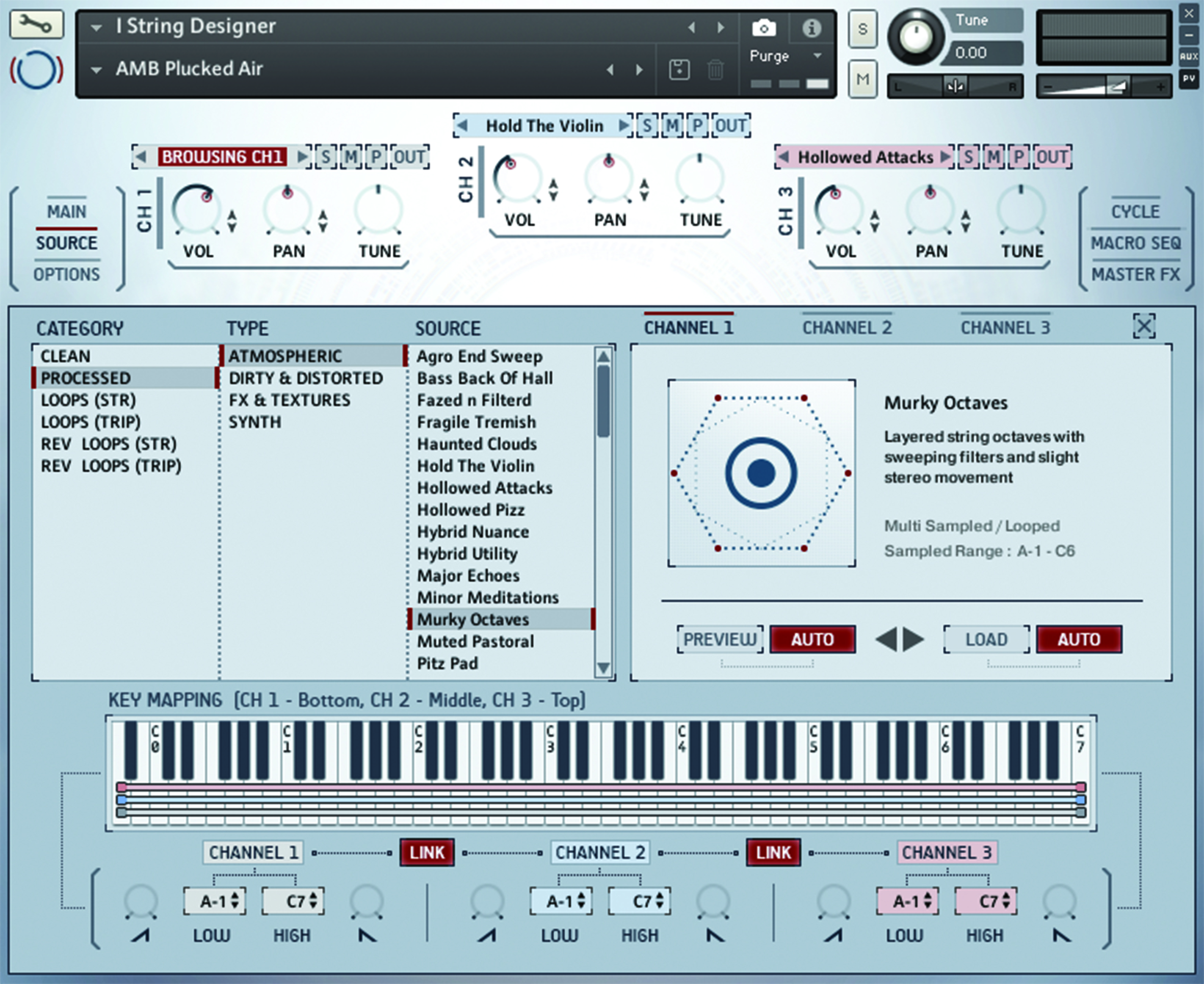 Here, we’re selecting the raw samples from the menu-driven hierarchy 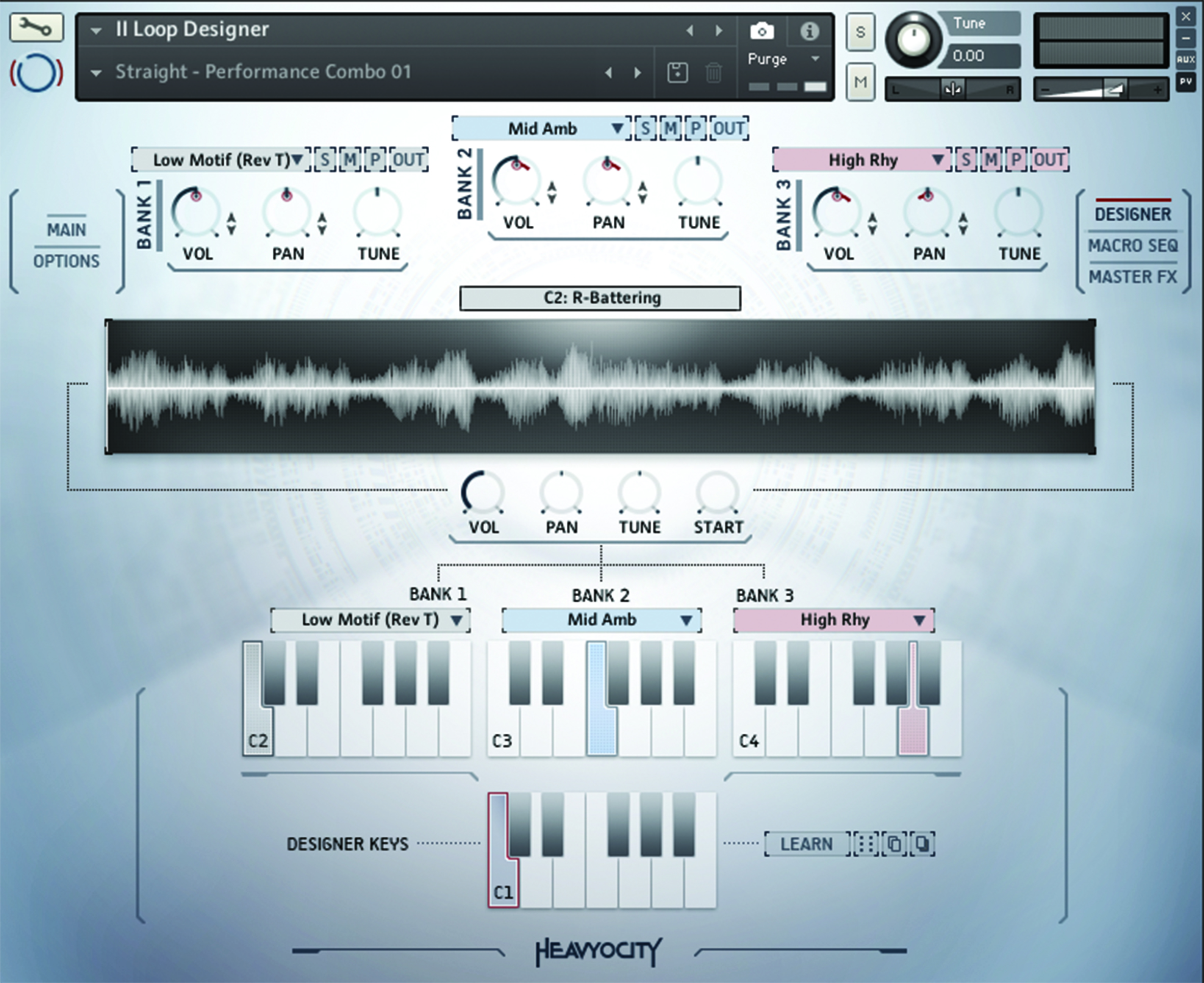 The Loop Designer allows for further sound design, making use of the hundreds of onboard loops – all just waiting to be tweaked and edited

Sharing similar credentials, the Loop Designer offers many similarities to the previously discussed String Designer, but here, the power of over 400 loops, which will tempo lock, enables both the building of patches and real-time control, which is pretty unique in this orchestral setting.

Essentially, it’s possible to work with loops while dictating pitch in real time, but with the added quotient of the fully programmable Macro control. Starting with the sample data, timbre is loaded in a similar manner to before, but helpfully, samples are collated as straight feel, triplet feel, etc., so it’s very easy to get at something that’s appropriate.

These samples can be assigned at the note level, meaning each note can have a different selection of samples assigned, with the actual core note being assigned from within a trigger section. This means that it’s entirely possible to trigger the sample both rhythmically and chromatically, which creates all manner of flexibility in performance.

It’s very cool indeed and, given its loop-based functionality, is very creative in use and a million miles away from the prescribed and predetermined loops you often hear in other packages.

The Macro control is where elements can be easily and quickly assigned, in multiple instances, for real-time control or sequenced within the Macro sequencer. This means you can have obvious contenders, such as the filter, offering control from the mod wheel of your controller. But moreover, with other elements applied, you can create an incredible sense of movement, just ripe for cinematic strings that sound engaging, interesting and modern, and Heavyocity has offered a wealth of tantalising presets to get you going, which can be tweaked to suit.

Novo: Modern Strings offers plenty, for a sensible price. The fact you get all your traditional patches alongside something flexible and modern is a real coup, and making this incredibly appealing to anyone working in the soundtrack arena.

I’m not normally one for loops that prescribe composition, but here, the flexibility is such that it doesn’t feel much like a loops library. When you couple it with all the other traditional-based sample patches, it’s very capable indeed, and a bit of a bargain. There are plenty of other orchestral strings libraries that would give this a run for its money, but they’re twice the price, and when you take into account the programmable designer elements, this is a very tempting package.

Do I really need this

If you are into writing soundtrack music, either at amateur level or professionally, this is a package that may well be worth looking into. Against some other libraries, the Traditional strings library side of the package puts up a great front, but the Hybrid side of the package makes it very cinematic and modern, and in my view, represents a real strength that you don’t see in the same way elsewhere. This means that it’s unique and different, and as any soundtrack composer knows, searching for those new sounds can be very useful for inspiration.

Being from across the pond, and with cinematic tendencies, it’s best to compare other libraries that offer a similar sonic palette at a similar price point, and the two that immediately spring to mind are Hollywood Strings from EastWest, and Cinematic Studio Strings from the Cinematic Studio Series. Both offer bright and wispy timbres that lend themselves to soundtrack writing, but where Novo comes into its own is with the processed elements, and the amount that the user can do to command this, which really opens up whole other levels to this library.