How does an £89 EQ plugin stack up against the £639 hardware on which it’s based? Adam Crute puts the SSL XR625 and NI Solid EQ head-to-head and finds out… Solid State Logic – aka SSL – design and build some of the finest audio hardware in existence. Their G-series, E-series and other mixing consoles […]

How does an £89 EQ plugin stack up against the £639 hardware on which it’s based? Adam Crute puts the SSL XR625 and NI Solid EQ head-to-head and finds out… 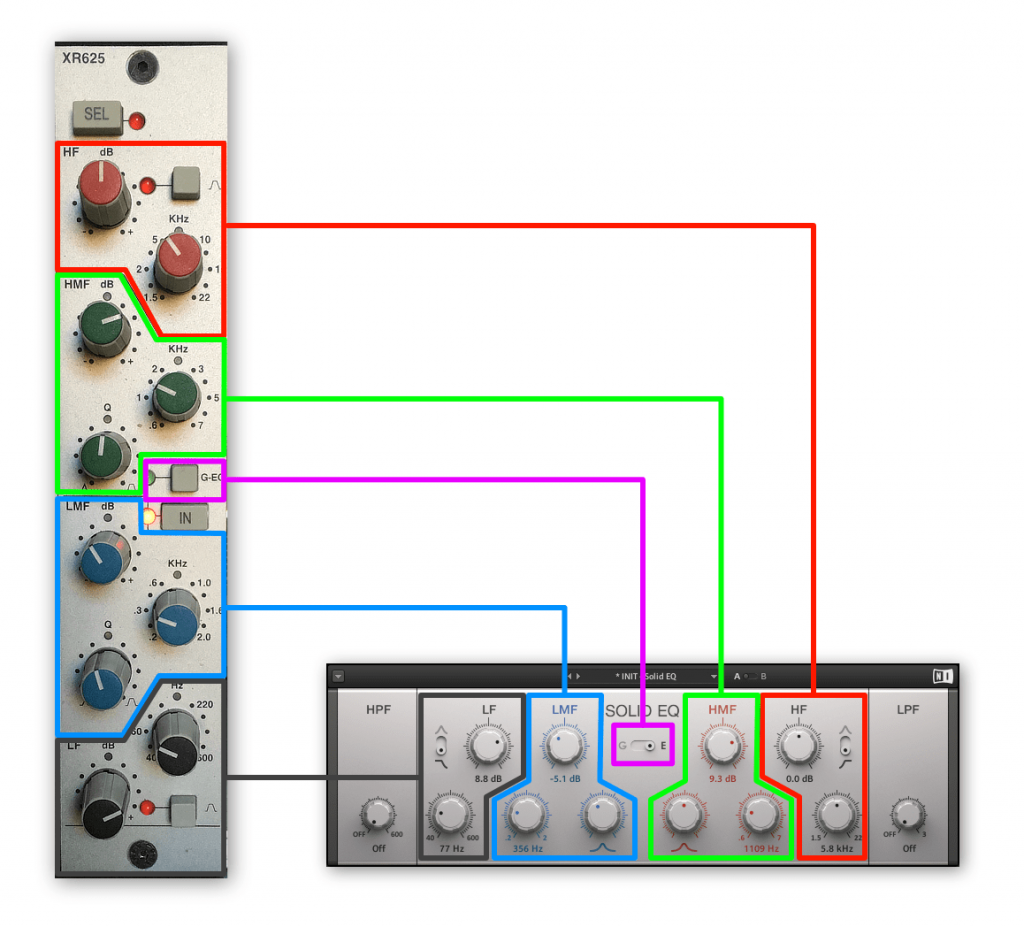 Solid State Logic – aka SSL – design and build some of the finest audio hardware in existence. Their G-series, E-series and other mixing consoles are found in the world’s top recording and audio-post studios, and are responsible for the pristine sound quality heard on many big-budget productions, in both music and film.

SSL gear doesn’t come cheap – you could literally buy a house for less than the cost of a 32-channel E-series. But thankfully there is a cheaper way of getting a little bit of genuine SSL magic into your studio in the form of their X-Rack Module range. These small modules contain circuits taken directly from SSL’s consoles – preamps, EQs, compressors, and so on – and are mounted into an 8-module X-Rack chassis or 2-module Mynx chassis. The idea is that you can mix-and-match the modules you want and incorporate them into your existing studio rig; this is still expensive fare, but has a much more accessible price-tag for smaller studios and high-end home/project studios.

But is it worth forking out for such top-notch kit when there are software plugins that emulate the SSL hardware? To answer this question I am, over the next few months, going to compare the modules in my X-Rack with software emulations produced by Native Instruments and Universal Audio; for this first mêlée I’m comparing the SSL XR625 EQ module, taken from the XL 9000K console, with NI’s Solid EQ, which is modeled on the same 9000K EQ circuit.

Although they’re laid out differently, there’s a close match-up between the look and feel of the XR625 and the Solid EQ. This similarity even goes so far as a close correlation in the values represented by different knob positions on the two units; I.E. a frequency knob set to the 9 o’clock position on the XR625 will be selecting much the same frequency as the same knob on the Solid EQ set to the same 9 o’clock position. The Solid EQ also features an “E/G” switch which – just like the same switch on the XR625 – selects between an E-series and G-series characteristic.

The only notable difference is that the Solid EQ features a low-pass and a high-pass filter that the XR625 lacks (these filters are present on the X-Rack preamp modules instead).

For the purposes of this comparison I prepared a number of short audio examples, and then fed these through both units using identical settings on each (or as close to identical as it’s possible to get). You can listen to the results and see images of the settings used below.

In operation, it’s striking how close Solid EQ’s sound is to that of the XR625; Native Instruments have done a fantastic job of modeling the original hardware, and the difference in sound is extraordinarily subtle between it and the SSL hardware.

That said, the XR625 does still edge it in terms of sound quality, giving a more open, ‘airy’, sound, and generally sounding a smidgen sweeter than the Solid EQ. On individual tracks this difference is slight, but when added up across a whole mix containing many parts, the hardware’s superiority would be cumulative and obvious.

Of course the cost of having enough XR625s to cope with an entire mix would be huge, whereas a single Solid EQ license lets you run as many instances of the plugin as your computer can handle. In this regard, Solid EQ wins hands-down.

In an ideal setup, one would have a few XR625s as part of a high-quality ‘front end’ for use when recording and tracking, whilst also have Solid EQ for use when mixing. But if your budget won’t stretch that far then Solid EQ will get you exceptionally close to the SSL EQ sound.