With its latest not-quite-clone, Latvian synth specialist Erica has delivered a future all-analogue classic inspired by a classic of old 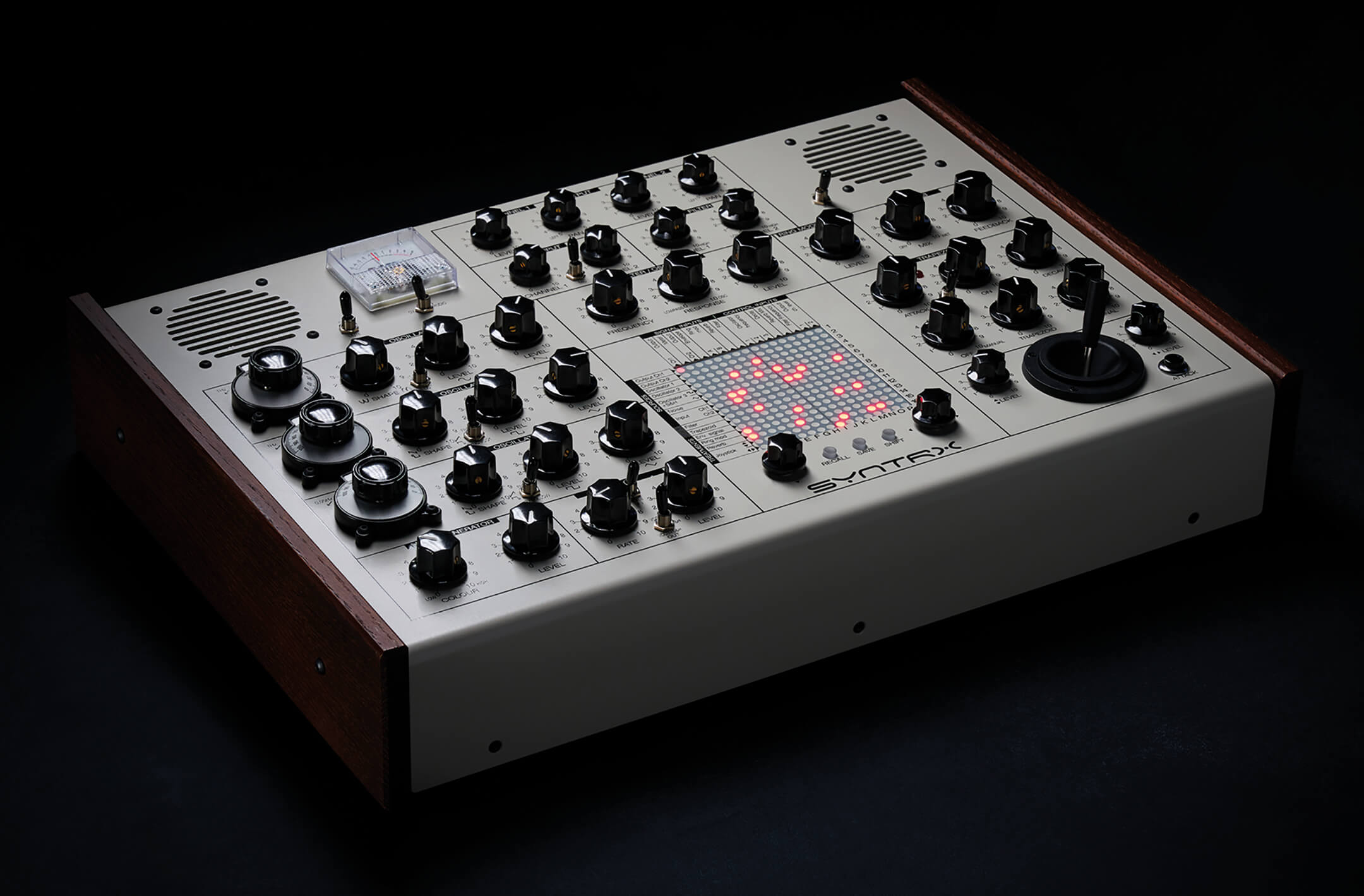 Erica Synths has garnered a respected reputation over recent years – and it’s the company’s development of interesting Eurorack modules coupled with wide support for the Eurorack community that is the backbone of this success story. While breaking out of Eurorack has spawned such products as the applauded DB-01, Erica is now dreaming bigger, drawing inspiration from one of the most iconic electronic musical instruments of all time.

To Putney and beyond

Peter Zinovieff is a British-Russian veteran engineer, composer and private studio owner from Putney in South London. He founded EMS (Electronic Music Studios) in 1969, which sparked a movement in the development of electronic music and associated instrument and computer technology. As the driving force behind EMS, Zinovieff was soon joined by designer David Cockerell, who was responsible for creating the legendary VCS3 synth (nicknamed The Putney) and its more portable incarnation, the Synthi AKS. Housed in a small black case and complete with keyboard, the AKS would not have looked out of place in a Bond film. It’s this design that Erica has been drawn towards, developing something similar with the help of Riga Technical University. However, Erica is clear that this is more a homage to an inspirational instrument than a simple clone. 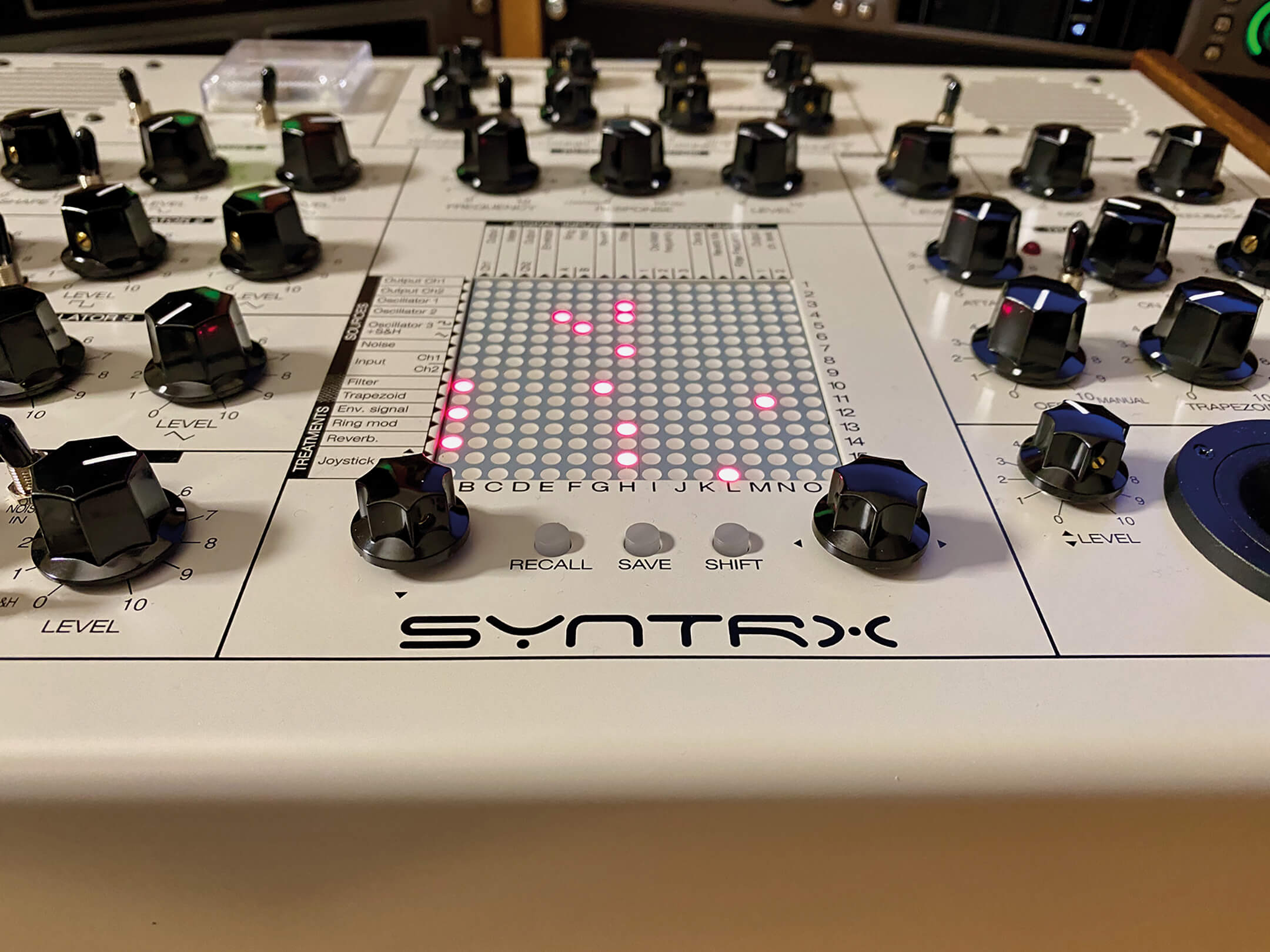 The original AKS brought an enormous number of groundbreaking concepts to synthesis, none more obvious than the presence of a matrix, which allowed for complex modulation sans cables. The Syntrx matrix is fairly exacting in style and detail to the AKS version. The biggest difference is that the Syntrx does not require patching with pins, which have been replaced by two rotary encoders that control the vertical and horizontal movement of an illuminated LED. Once the required patch point is reached, a press of the right-hand encoder engages the signal routing.

The left-hand encoder provides the same function but with varying degrees of preset attenuation. The biggest advantage of this is the ability to save up to 254 matrix patches. There are 256 patch points on the matrix, which also doubles as the location for storing and recalling patches. The first and last memory locations, however, are reserved, presumably for such functions as the non-volatile recall of the last patch setting. Syntrx auto-saves patches every 30 seconds too.

Even if you have a firm grounding in synthesis, you may find yourself drawing breath before drawing sounds out of the Syntrx. It takes some time to get your head around the complicated but flexible matrix and, even then, it’ll leave you scratching your head now and again. 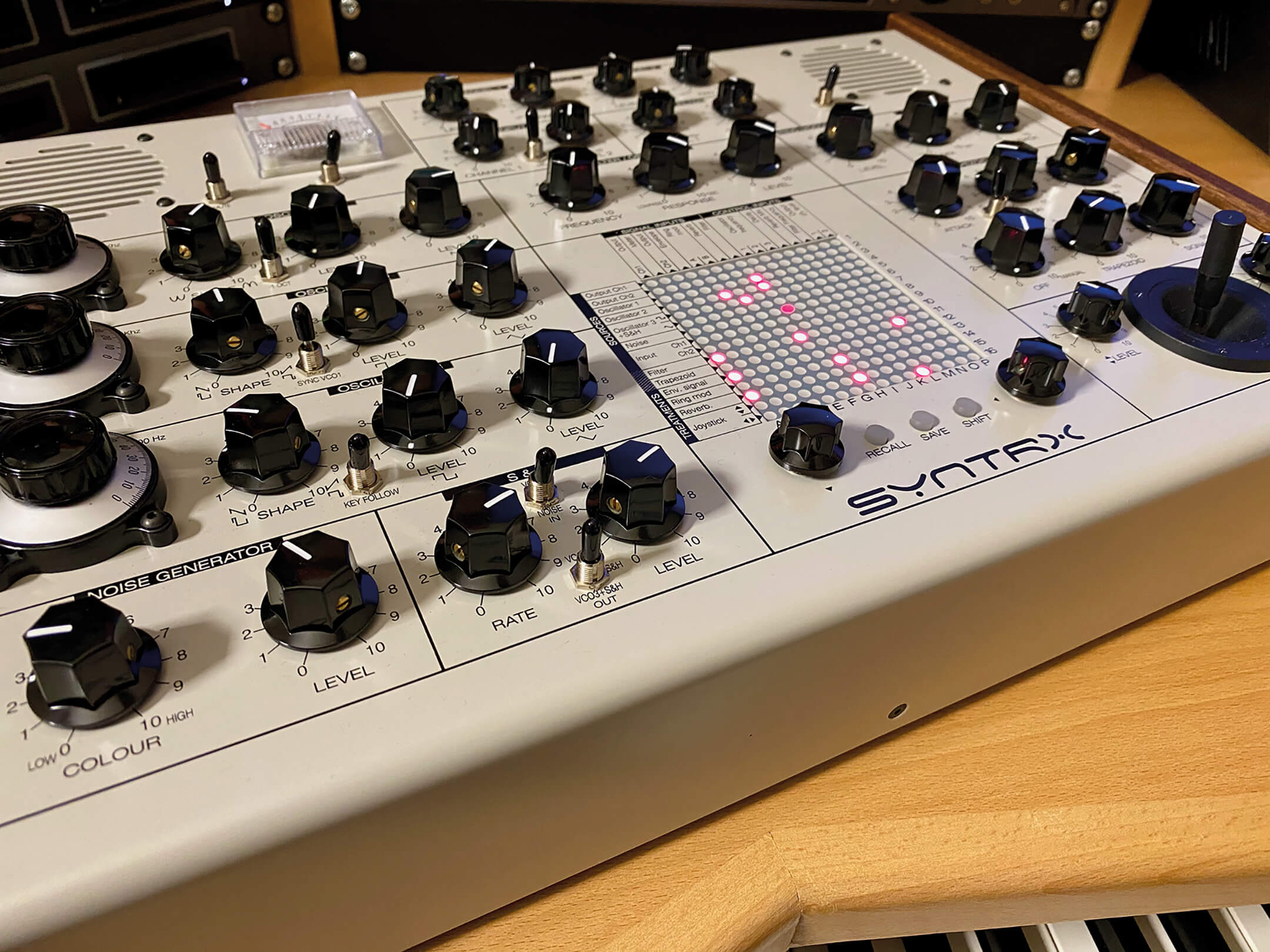 While the Syntrx is arguably capable of more than just subtractive synthesis, it certainly excels at it, with three VCOs at the front end of the signal path. But before you can hear any of them, you’ll need to route them within the matrix. The Syntrx is equipped with two outputs, which can be treated as mono lines or paired to form a stereo signal. In the case of the latter, each output offers a manual pan, as well as an output filter that functions as a tone control at the output stage.

The VCOs are all broadly the same, equipped with vintage-style frequency pots. But all three possess an individual set of unique parameters too. They’re also able to track reliably over eight octaves. We begin by routing VCO 1 directly to an output, with no additional treatment. It offers a sine and saw simultaneously, each with its own level pot, and waveshaping available for the sine.

The resultant wave alteration creates a timbre that moves from thin to rich, with a slight sense of overdrive. As a sine, it does not sound unadulterated but it does sound weighty and has plenty to offer when it’s blended with the accompanying saw. The saw sounds rich and flavoursome too, with a quality of tone reminiscent of a bygone vintage synth. VCO 1 also has a perfunctory switch, for dropping or raising the pitch by one octave. Because the frequency is set via a free-wheeling pot, the tonal centre here is somewhat up for grabs.

The Syntrx’s ring mod is one of the finest we’ve ever heard, and gives you beautifully crisp metallic tones

VCO 2 has square and triangle waves, controlled independently via their own pots. Both are open to pulse-width modulation via an accompanying pot too. VCO 2 can be blended to create a tonal pairing with VCO 1, as well as synced for classic sync tones. Things can seem fairly uniform here but be in no doubt that the nature of the Syntrx’s analogue circuitry yields extremely interesting results, especially as the pitch and tonal elements of each signal appear to fight each other. The net gain is a rich signal, with the occasional happy accident leading to incredibly organic textures.

VCO 3 operates well across the audio range but is deigned chiefly for those low frequencies, with a range of from 0.05Hz to 500Hz. In its stealth form of an LFO, it can be set to free run or key-follow, depending on how you wish to use it. Enabling the key-follow function means you can get some wonderful modulation effects, particularly as it produces square and triangle waves, also open to modulation within the VCO.

Alongside its VCOs, the Syntrx features a colourful white-noise generator, based around a Zener diode. Apart from offering a dedicated level control, it incorporates a colour control, which boosts high or low frequencies according to the pot position. In a setting such as this, the humble noise generator suddenly turns into a creative powerhouse when applied through a longer signal chain. 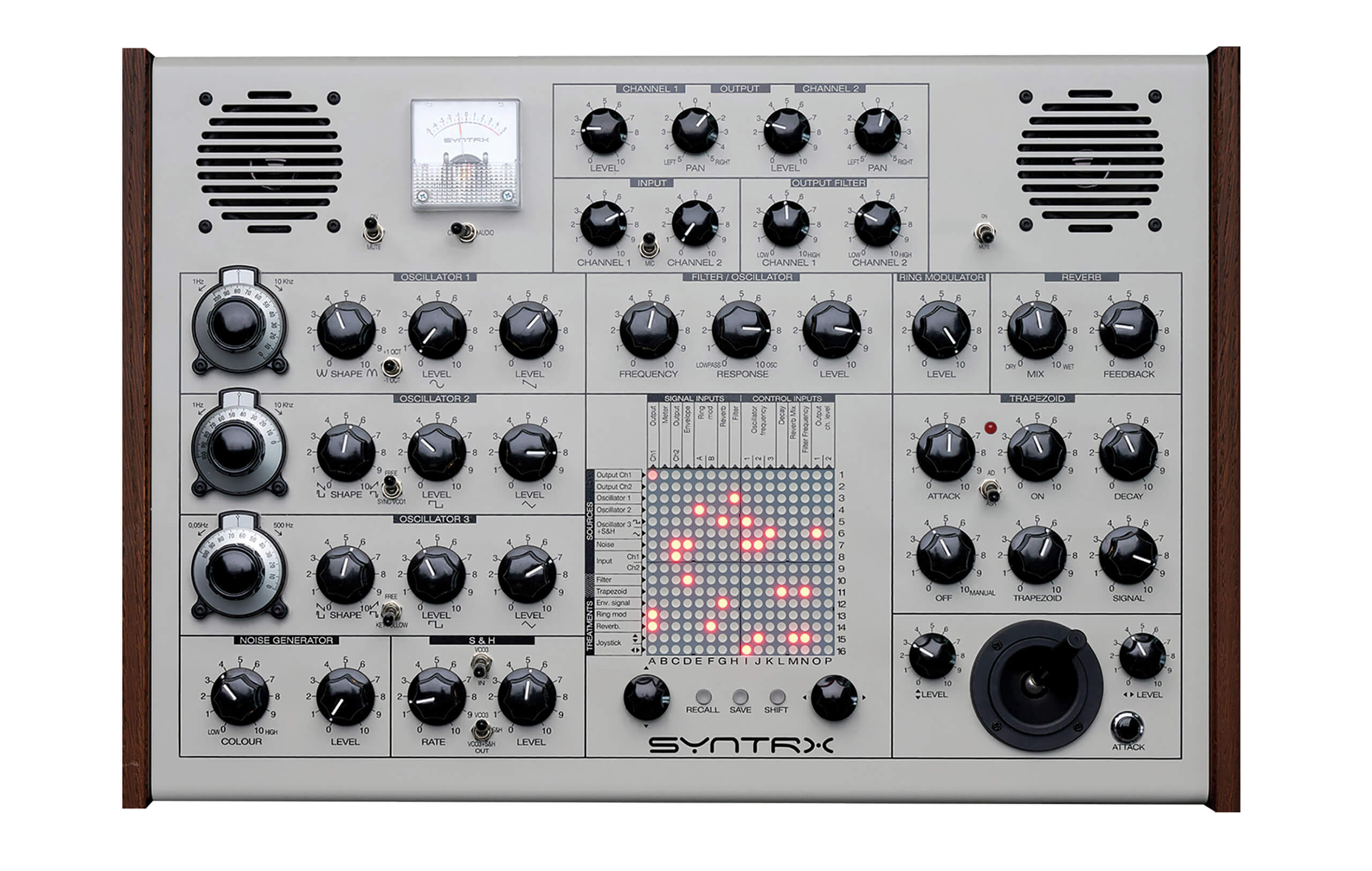 Put a ring modulator on it

The VCO tones are sensational. Whether independent or combined, they move effortlessly between purity and distortion. There’s a vintage richness to the filter circuit here. There’s no significant drop-out upon resonance application. The key-tracking is an integral part of the synth’s design too, and emits a gnarly sine wave for use as an oscillator if required. The filter is of the low-pass flavour but remember that there are back-end tone-control filters here too.

Should you wish to make your tones even more interesting – and why wouldn’t you? – there are a wealth of further options available here too. The Syntrx’s ring mod is one of the finest we’ve ever heard. Applying two VCOs to this circuit – also known as a four-quadrant multiplier – gives you some beautifully crisp metallic tones. This is routed via the matrix, with the resultant sum open to signal routing to further locations. Straight to the output via the filter would be the most obvious path. However, next door you will find the spring reverb – and it’s the real deal too, not an emulation. As it is with the Arp 2600, the spring reverb is arguably part of the Syntrx’s sound, even if it isn’t of the highest fidelity.

This is also a good time to mention the external inputs, specifically with regard to the ring modulator. Combining a mic signal with a VCO signal summed via the ring mod, for example, will give you an effect that’s almost like a vocoder, leaving you sounding like a cross between Cabaret Voltaire and a Dalek pretty quickly. Just add spring reverb for added sonic spice.

Both the Syntrx and its inspiration, the AKS, have many unique features. One of them stems from the envelopes. While this is an AD or ASR type, it has the same trapezoid function found within EMS devices, named for its trapezoid-shaped envelopes. The circuit can be switched from the regular attack/decay-style functions to the ASR mode, which allows for looping. This will prove invaluable if you’re using the Syntrx as a standalone synth too, as the resulting looped gate can be used to modulate amplitude or anything else assignable from the matrix while in loop mode. The attack button also activates the gate, which assists if there’s no external trigger connected.

Another EMS-inspired inclusion is with the joystick, which gives you X/Y control of any parameters patched via the matrix, with attenuation available via the adjacent pots.

There has been considerable buzz about the Syntrx. EMS synths are legendary among industry types and, while this is not a clone, it’s much better for being designed with an eye towards contemporary requirements. It’s also considerably cheaper than it’d be to buy any vintage EMS classic, even if it commands a hefty price of its own. Is it worth it? Yes, in design and build alone. But this is a musical and technological investment too. An EMS equivalent would cost you about four times as much.

The build quality is outstanding. The full metal chassis with vintage styling and exceptionally robust pots make this feel like an old-school classic. It’s even got a VU meter with two built-in speakers, even if they won’t exactly glorify the Syntrx’s sonic potential very much due to their small size.

Its true appeal only becomes apparent when you switch on, start twiddling knobs and get lost

The Syntrx is far more than a regular subtractive synth. It can tackle the usual subtractive duties with ease. But if that’s the sort of synth you yearn for, you might find the business of patching via the matrix a little long-winded. It’s certainly got grit for basses, distortion and even the more musically avante garde. But this is a synth built for experimentation and exploration. Its true appeal only becomes apparent when you switch on, start twiddling knobs and get lost in electronic music. This will happen quickly too. Though there’s no accompanying sequencer or keyboard here, which might limit its standalone potential, it packs a lot of character into a box that oozes vintage charisma and sonic prowess. The potential for timbral recreation is limitless. 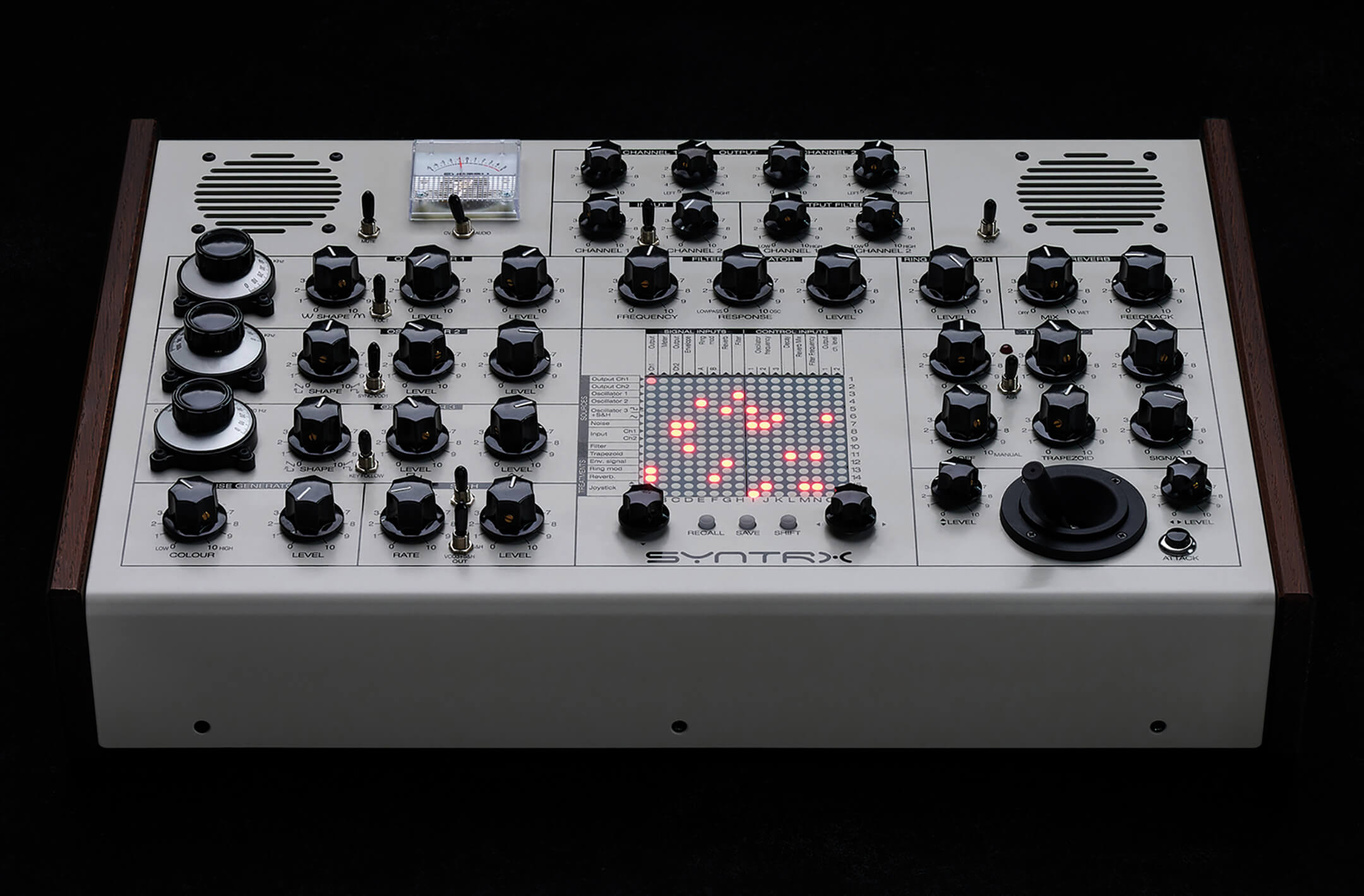 This is an incredible synth but it’s a far cry from the other future analogue classics
on the market. You get what you pay for and with the Syntrx, you’re buying into a world of sound that would cost far more in modular form, and would be nowhere near as hands-on in software. It’s a synth you can experiment with, while creating extraordinary sounds and textures. If you enjoy exploring with sound, it’s a must.

Since the Korg Limited edition Arp 2600 has been and gone, it’s been left to Behringer to clone it. Similarly characterful and full of vintage charm, this version shares many audible characteristics with the Syntrx.

This isn’t the hardware bounty of the Syntrx but it’s a great software recreation of the Synthi AKS. Apart from being an excellent virtual model, it’s equipped with plenty of extras, including a built-in sequencer.