A compact collision of analogue and digital: will the third addition to the ‘Digi Trinity’ live up to the legacy of its forebears? 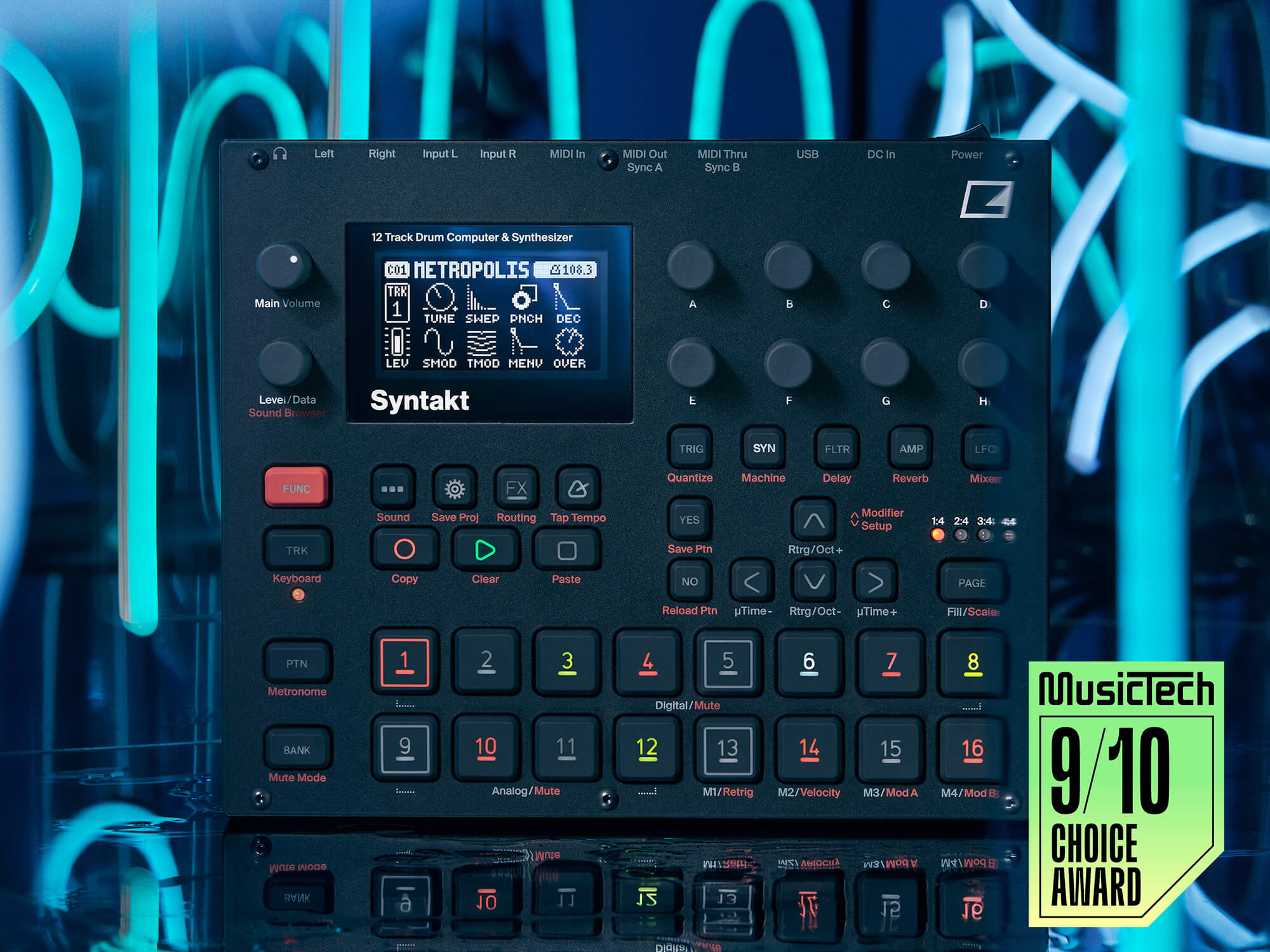 ⊖ Workflow and button combos can stray from complex to confusing

“Rain is like the sound of trains outside your window. Looking out, you see the reflections of the passing above-ground subway and crimson tail lights. Refractions in the lingering water droplet trigger memories…” No, we’re not quoting writer of the New York Trilogy Paul Auster; this is the introduction to Elektron’s manual for the Syntakt groovebox.

Anyone familiar with the Gothenburg brand will know that such demonstrative philosophising is all part of the deal with this developer, which has over the past two decades produced some of the most revered electronic musical instruments on the market.

Never shying away from a retro look, Elektron units boast a smart signature aesthetic and powerful sonic footprint. The Syntakt hasn’t strayed far from the tried-and-tested workflow and design of its predecessors, including the larger Analog Four MKII and Analog Rytm MKII. Its closest relatives, however, are the other two constituents of the ‘Digi Trinity’, the Digitone polyphonic digital synthesiser and the Digitakt drum computer and sampler – which are near-identical to the Syntakt in layout.

The Syntakt starts somewhere at the intersection of the Digitone and Digitakt, then goes in a different direction entirely. A hybrid tabletop analogue and digital machine, it has faint echoes of both the Machinedrum and Analog Heat, capable of a vast array of synth voices, drum sounds and otherworldly noises. Its onboard effects can augment those sounds for classy mixing, create dynamic passages of movement or mangle them until they’re unrecognisable. Its sequencer is immensely flexible, ranging from 30-300bpm and from 1 to 64 steps in length with varying note divisions. 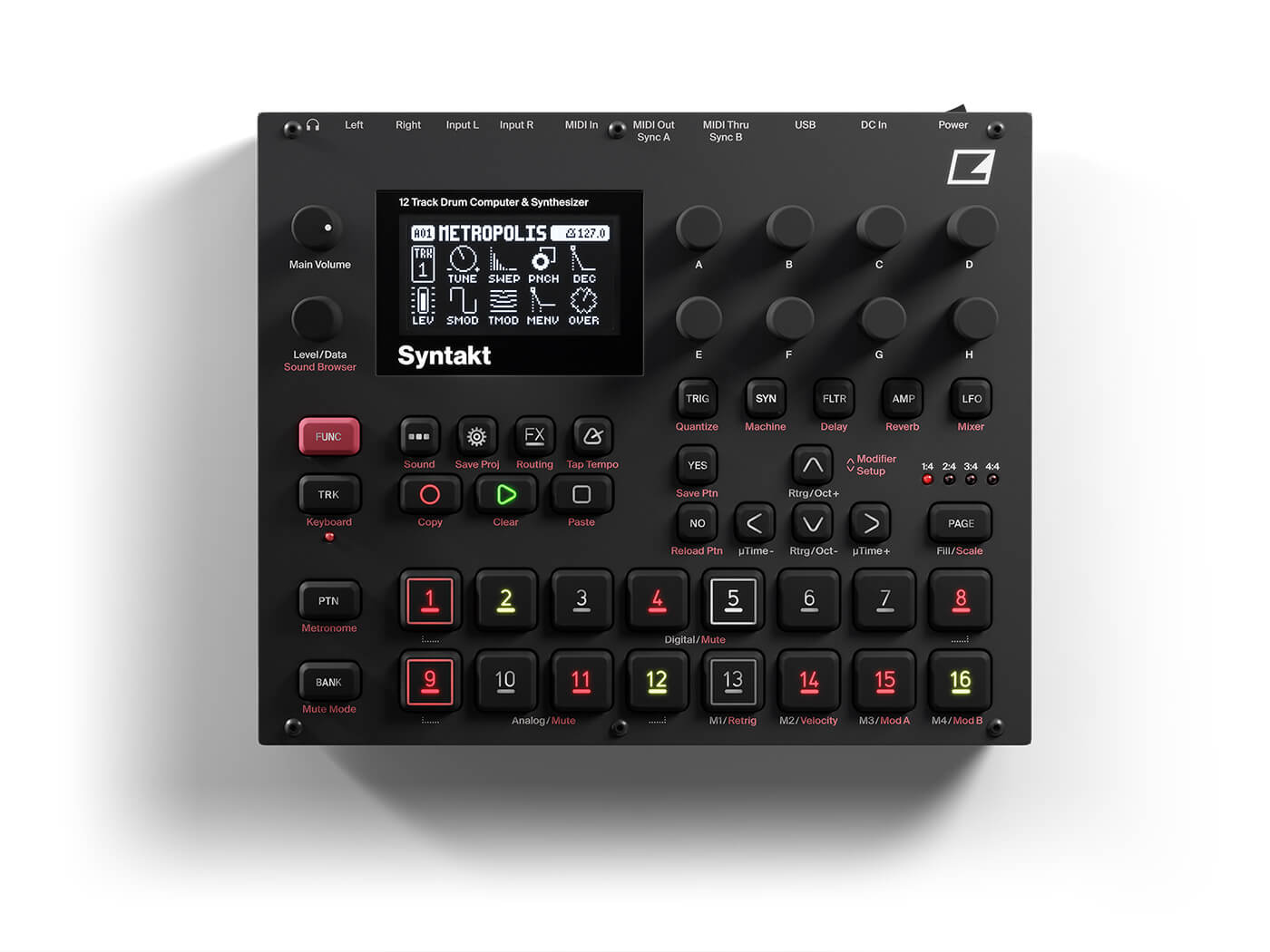 The unit is immaculately built. A sturdy and sleek black-powder-coated chassis houses a sharp screen alongside smooth encoders and colour-lit computer keyboard-style buttons – which are very satisfying to hit, if a little rattly. The Syntakt’s weight means it won’t move a millimetre during use, plus it’s tactile, responsive and rewards on-the-fly fiddling.

Four analogue tracks and eight digital tracks constitute the heart of the Syntakt. The analogue side is split into three slots for Analog Drum ‘Machines’ – that is, synthesis engines – and one for an Analog Cymbal Machine. The most basic workflow of the Syntakt is simple: each audio track begins with you selecting from the Syntakt’s possible machines, before editing the sound by adjusting its parameters and applying effects. The effects are clearly laid out on-screen and correspond to the Syntakt’s eight data-entry knobs. The screen features helpful graphics too, some of which appear to take inspiration from the likes of Teenage Engineering. For example, the Bit Reduction parameter on the Sy Bits Machine is accompanied by a playful miniature Space Invaders-style graphic. 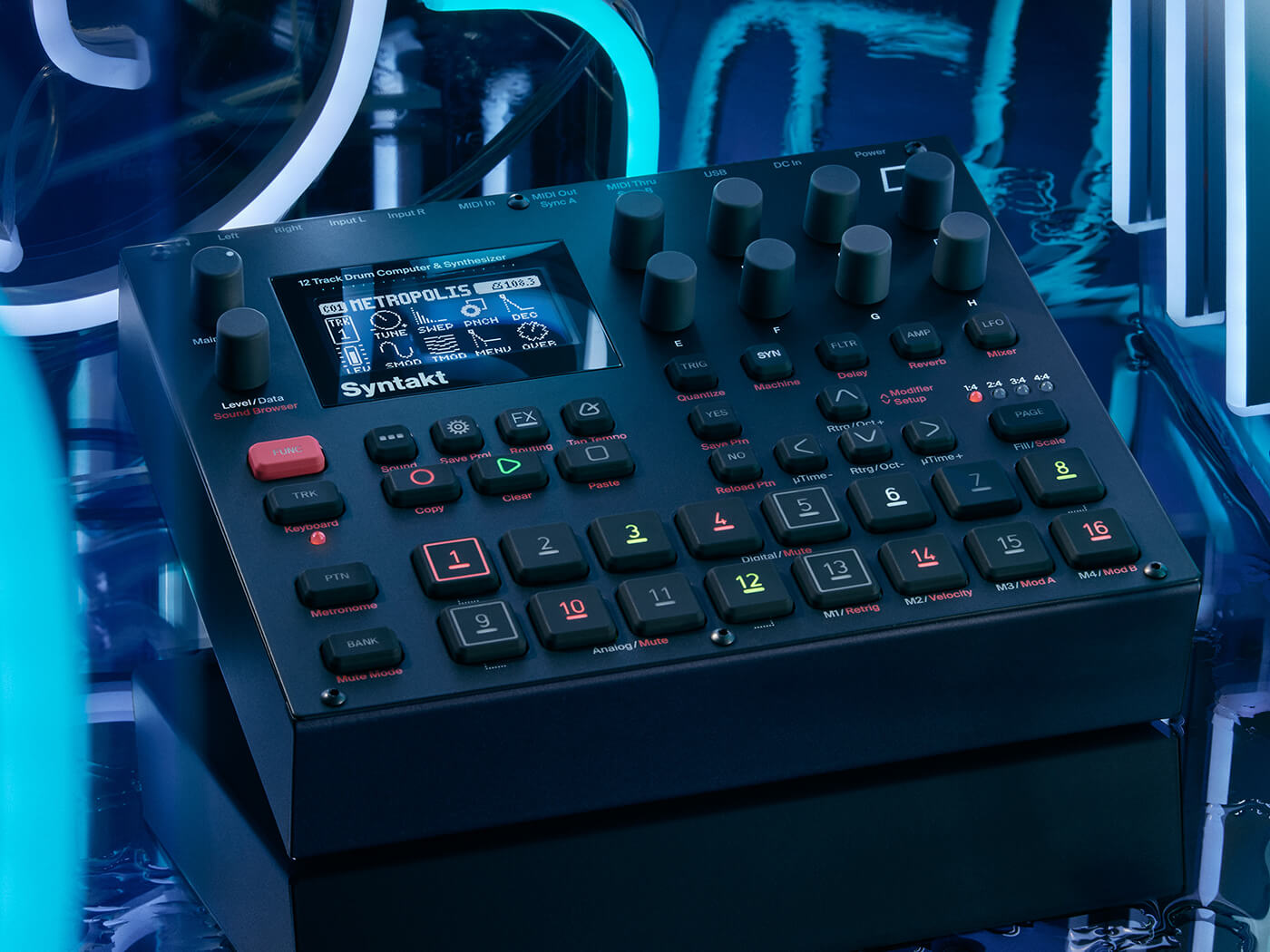 The Syntakt’s analogue and digital Machines present a handy selection of sounds, from a versatile digital chord synth to an analogue FM bass drum sound. Any of these tracks can be used to output MIDI instead for controlling other hardware – though this also sacrifices the audio on that track, so you’ll have to choose your Syntakt partner hardware carefully.

When it comes to effects, the Syntakt is somewhat conventional, with reverb, delay, drive and filtering presented in a classic set of studio-style audio processors. But the Syntakt’s sounds are so flexible that this feels like plenty. It doesn’t overcomplicate things and, crucially, performs those select effects incredibly well. The Syntakt’s drive and filter are analogue, a definite asset to its tonal character. 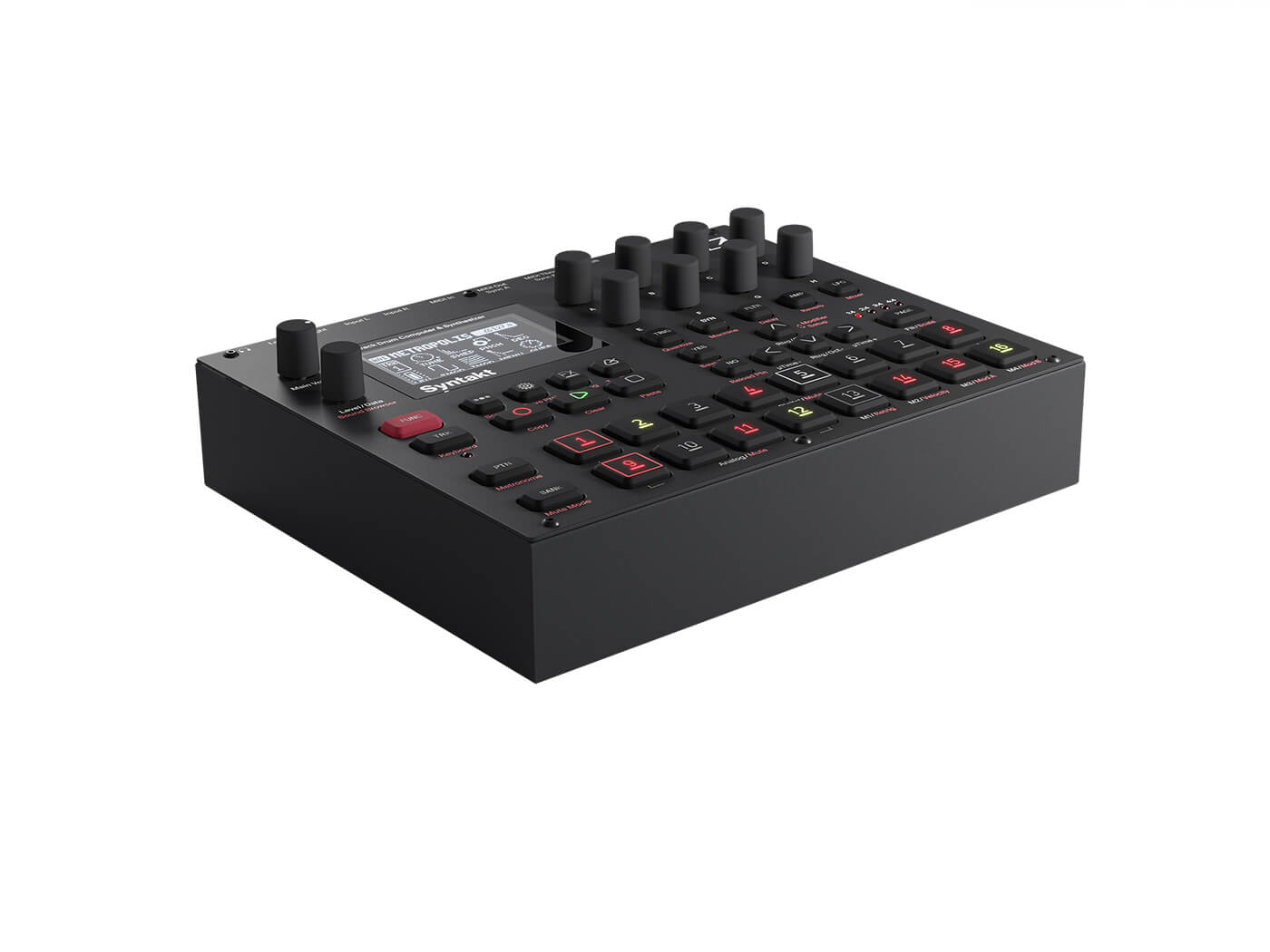 All effects and parameters considered, it’s an excellent balance of limitation and open-endedness that keeps things moving while encouraging creativity.

The Syntakt’s workflow and transport control might take some getting used to for those unfamiliar with the Elektron workflow but it’s easy to navigate once you have the principles in place. One aspect of this, for example, is that the Syntakt’s effects are ostensibly as fundamental to its output as its sounds themselves. The Syntakt’s Parameter Lock function and FX track are both central in this respect, essentially allowing you to sequence parameter values and effects alongside, or independently of, the sound(s) that they adjust.

A single synth oscillator might be set to drone on through an entire sequence; but that’s just the beginning. Any or every step could see that sound shift in waveform, filtering, volume, harmonic balance, reverb mix and so forth. How best can creativity be encouraged in sequencing? Dynamics, dynamics, dynamics, says Elektron.

Each of the Syntakt’s possible 128 projects consists of up to 128 patterns, stored across eight banks. That’s more than enough to get you going. Patterns can be swapped and edited in length and speed – as can individual tracks, making for some potentially delicious syncopation – with a couple of quick button combos. 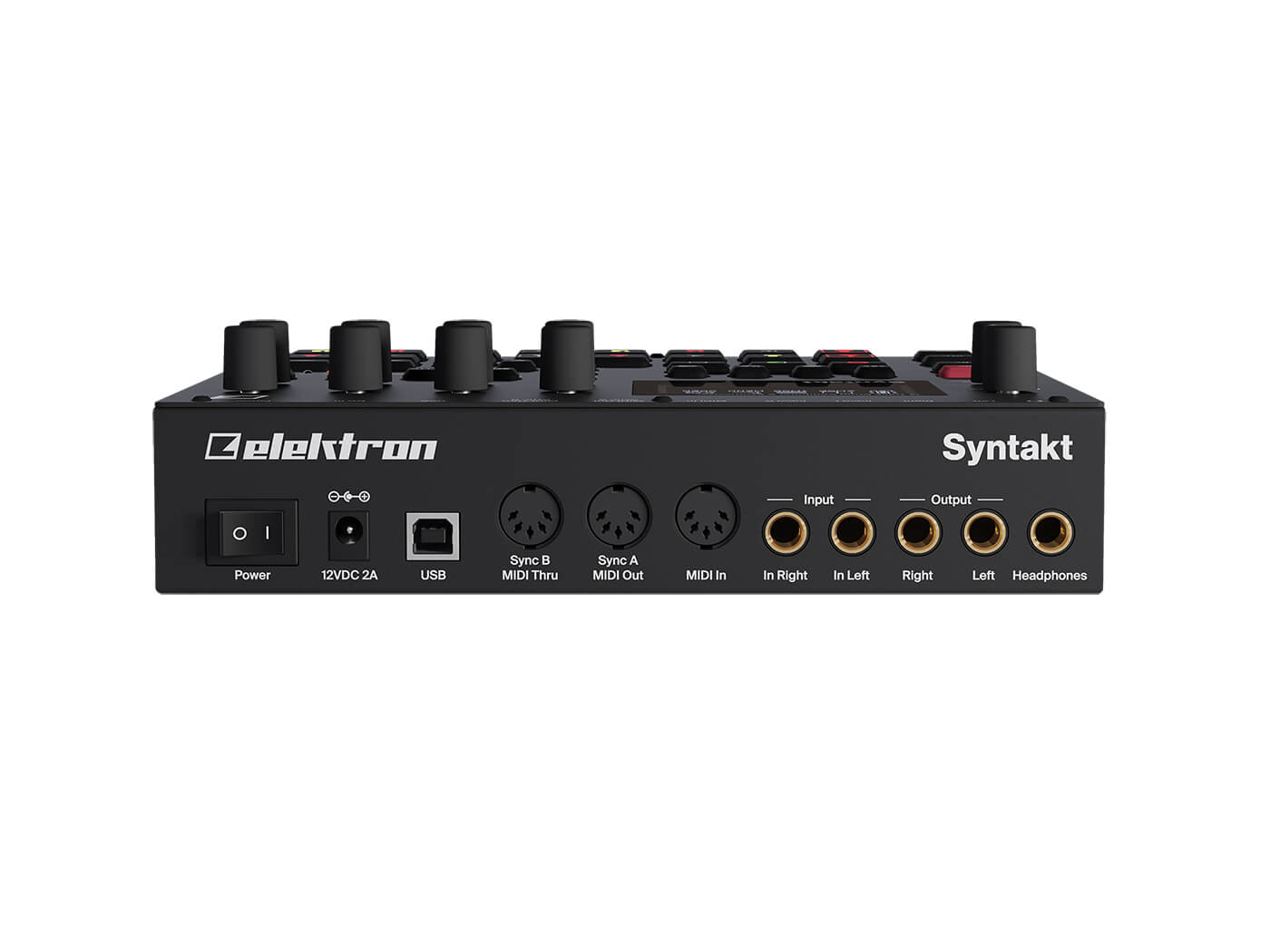 Almost every button on the Syntakt carries at least two functions. At first, it might be confusing as to which mode you’re in and exactly what you’re editing, but once you’re versed in the Elektron workflow, navigating the Syntakt becomes almost intuitive. In any case, the primary functions of the Syntakt remain upfront and accessible, even in the early stages.

Elektron has added two new features on the Syntakt not found on the Digitone or Digitakt: Trig Modifiers and an Analog Effects Block.

The Syntakt’s four Trig Modifiers are particularly useful for live performance, as they enable you to effortlessly apply one of four user-preset parameter values. The first two Trig Modifiers are set to adjust retriggering and velocity, respectively. Retrigger is a fantastic performance tool that opens up a world of expressive, faux-Aphex Twin glitching, repeating and ratcheting in any sequence. Well suited to sharp, short sounds, it can retrigger notes at any speed, from 1/1 to 1/80 note divisions.

Using Trig Modifiers to adjust velocity will doubtless be welcome to those who found the Digitone and Digitakt’s lack of velocity-sensitive buttons frustrating. It still only gives four options but it’s hard to imagine needing many more for most applications. The last two Trig Modifiers are assignable to pretty much any parameter on the Syntakt. This could be anything from filter frequency to LFO rate. We found it particularly suited to reverb, expanding and contracting complex sonic spaces within a sequence to let it breathe through a performance.

The Analog Effects Block, meanwhile, is a versatile way to route certain tracks in a sequence to a user-preset effects insert – another impressive use of the Syntakt’s analogue processing. Set up an insert chain of all-analogue drive and filtering, complete with modulation, and simply choose which tracks (or indeed external audio) to send its way.

Another update is Song Mode, which has also come to the Digitone and Digitakt. This feature allows for pattern chaining beyond the sequencer’s 64-step limit, meaning entire songs, passages and even sets can be crafted and played from the unit with a single gesture. Its playability need not stop there, of course. As with Elektron’s other class-compliant USB compatible devices, the Syntakt also works with Elektron’s free Overbridge software suite, allowing access to its functions as a plug-in from your computer or even rendering it a sound card in itself, slotting nicely into a laptop set-up. Overall, when it comes to compatibility with your set or your set-up, it’s hard to imagine the Syntakt not being an asset.

Durable, flexible and excellent-sounding at home in the studio or onstage, Elektron has done it again with Syntakt, showing no signs of loosening its hold on the hearts of producers across the electronic and experimental music world. In the words of that, erm, beautiful manual opening: “Your pathfinder on a new musical journey, one both familiar and new.” They’re not wrong.