Elektron has updated its flagship analogue synth the A4 to MKII. Alex Holmes plugs in and prepares for four times the fun… 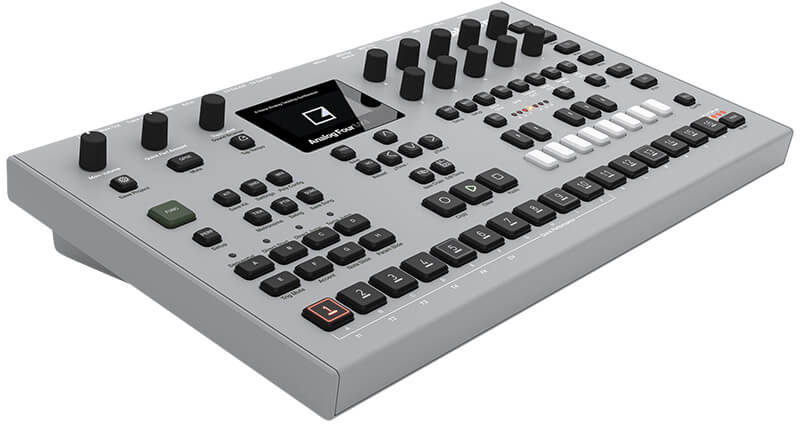 Swedish company Elektron found itself a place in the hardware hall of fame with the so-called ‘Dark Trinity’ boxes; the Analog RYTM, Analog Four and Octatrack. With these three machines, you could sequence and perform complex beats, synths and samples, and they quickly became the go-to boxes for electronic musicians looking to perform live.

Several years on, and Elektron has given its creations a makeover, with grey-coloured aluminium enclosures and a handful of refined features to improve the overall experience. We got our hands on the Analog Four MKII to put it through its paces.

For those that haven’t come across it before, the A4 is a four-voice analogue tabletop synth with a comprehensive built-in sequencer, CV input and output, and reverb, chorus and delay effects. Each voice features its own sequencer lane and arpeggiator, and a flexible system allows you to choose whether you want a note per voice, or one voice playing four notes (or four-layer unison) and everything in-between.

It can also be set up so that any track can steal voices from another track when needed, which we found a little confusing at first, but it’s a well thought out feature to get the most out of the voices.

There are two oscillators per voice, each with a handful of waveforms, plus its own sub oscillator, meaning you can get four-note chords just by carefully tuning a single voice. There’s also variable waveshape and PWM on all waveforms, a flexible noise oscillator, three OSC Sync modes, and the ability to do AM, FM and add vibrato.

With all these options in such a compact box, you’re obviously not going to have a dial-per-function, but luckily you get 10 silky smooth encoders and a decent 128×64 OLED screen on which to do your editing.

A handful of buttons are used to jump to the different editing pages, and although you don’t get fancy graphs showing things like ADSRs or LFO rates, it’s clear enough and fairly intuitive to navigate around once you get the hang of it. The screen is also super-bright no matter what angle you view it, so it’s easy to use in low light conditions.

Elsewhere, you have transport and cursor navigation buttons, 16 step sequencer buttons, a simple 1-octave keyboard, and a handful of other function and bank select buttons. Projects and sounds are saved on the built-in +Drive, with eight banks of 16 sequences per project, and a total of 128 projects and 4,096 sounds. This should be plenty for most, but you can (and should) also backup the drive using Sysex via the USB port.

If you’re used to the older Elektron machines, one of the first things you’ll notice, aside from the increased size, is the cleaner look of the whole interface. Despite the fact that there are several additional buttons for certain functions that help streamline the workflow, there’s more overall space on the panel, as the buttons are now backlit instead of each having their own separate LED.

They are also apparently super-durable and rated for 50 million presses, so you’ll be hammering home techno sequences for a long time before they wear out! That said, they still feel like you’re tapping on a 90’s qwerty keyboard, and it seems like a missed opportunity not to add some nicer feeling rubber buttons, even if just for the 1-octave keyboard.

Speaking of which, although said keyboard is now a little easier to play due to elongated keys, it might also have been nice to add velocity sensitivity so you could get more of a tactile performance out of the machine, but we appreciate there may be technical limitations that prevent squeezing this in. Some have complained about the overall size increase, as the previous versions were quite compact and square, and could sit tidily next to each other on a desk.

The MKII is definitely a more refined product that’s easier to use and sounds a little better than the original version. Whether it warrants an upgrade is of course another question given the fairly hefty price.
If you’re not fussed about the individual audio outs, CV in, and other new features, then you might find you’re better off sticking with your MKI, or getting one second-hand 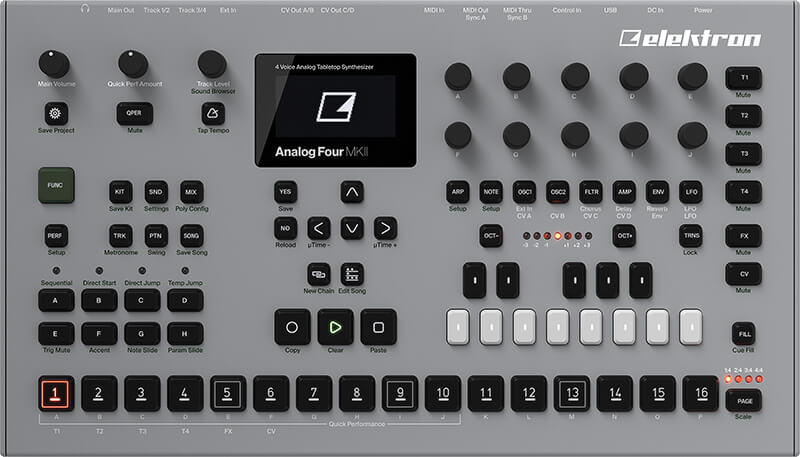 That said, the street price of the MKII is actually nearer to £1,000, and when you look at the fact you’re getting a four-voice analogue synth (capable of basses, pads, drums and more) with incredibly versatile modulation and sequencing options, plus a CV sequencer… It’s actually a pretty good deal.

Step to the rhythm

If you’ve come across Elektron gear before, you’ve probably heard people talk about the sequencers, and with good reason as they’re incredibly powerful and flexible. Each of the four tracks has its own sequencer (as do the FX and CV out), which can be up to 64-steps long, with the possibility to use odd numbers to easily create polyrhythms.

You can live record the movements of any parameter, but you can also use Parameter Locks that let you change a whole range of settings on a step-by-step basis. You can even change entire sound presets on different steps, allowing you to use a single track to play synthesised kicks, hats and snares as long as they don’t fall on the same step.

The other ace up the sleeve is Trig Conditions, which can be used to add probability to certain steps, or can set a note (or Parameter Lock) to only occur say on the third bar of every four-bar repeat. You also have accents, note and parameter slides, and four different ways that you can jump between patterns.

Once you get your head around it, it’s easy to build up complex sounding sequences that feel alive with movement, and it encourages automating parameters that you might not normally tweak. If you’re more interested in live performance, then there’s a Performance mode, which turns the 10 encoders into editable macro controls.

Each dial can control up to five parameters from any track, and can be given a name to help you remember what it does. It takes time to set up, but having this flexibility can help greatly when you’re trying to build a unique and playable live set.

So what else is new? If you look around the back, you can see that Elektron has added stereo outs for each of the four voices, which is especially useful if you like to process your sounds using a variety of effects, and new Expression and CV inputs that let you control parameters using external kit such as modulars or pedals.

Remaining from MKI, you also have an audio input so that you can process external sounds with the filters, drive, and effects, plus CV outs that have their own sequencer so you can send patterns to your favourite analogue kit.

Although this is a little fiddly to set up, you’ve essentially got a four-lane CV sequencer with two envelopes and two LFOS, plus the ability to use Parameter Locks and Trig conditions, making this a very competitive hardware sequencer in its own right.

It’s a bit of a shame that there’s no MIDI sequencer to control external kit, which would have arguably been more useful, but it’s understandable that Elektron want people to use the Octatrack and Digitakt boxes for that specific purpose.

Probably the most fundamental and important update though, is the reworked analogue circuitry, which is said to deliver deeper and more refined bass, and the enhanced overdrive that provides more bite and growl.

The new filter drive is especially tasty, helping to emphasise certain frequencies and greatly expand the overall sound design potential as it adds a different flavour to the original drive circuit. Not least is the ability to create squealing, resonant acid sounds that weren’t possible before.

There’s also the aforementioned FX, which include a lush sounding chorus, delay with filters, overdrive and ping-pong controls, and an expansive sounding algorithmic reverb with epic Infinite setting.

Whole new realms of audio madness are opened up by the fact the FX track has its own sequencer and two dedicated LFOs, so you can go wild with modulating delay times and chorus feedback amounts. When all the elements come together in the right way, the Analog four MKII is a great sounding machine.

The final piece of an already rather delicious cake, is the free software integration known as Overbridge. By hooking the A4 up to your computer using a USB lead, you can control the analogue synth as though it were a soft synth, and recall all settings when loading a DAW project.

Given that there’s a fair degree of menu diving needed to edit all the parameters, this makes programming sounds a much quicker and more intuitive process. It’s especially useful for setting up modulation routings or the macro Performance controls, as these can be done from a single page, and the GUI is clear and well designed.

That’s not all, however, as you can also use the A4 as a two in/two out soundcard, sending audio from your DAW into the machine to process via the filters, FX and analogue distortion, and can even stream all four voices, external inputs and the main bus to separate DAW tracks at 24/48 quality.

There’s no denying that the learning curve is steep on Elektron products. This is due in part to certain design decisions that you need to get your head around, like the fact you need to set the filter key-tracking to 32 to follow the keyboard, or the way the arpeggiator speed needs to be set to x6 to play 16th notes.

Luckily there’s a vibrant Elektron community and plenty of excellent online videos that can help teach the ins and outs, and it soon becomes second nature. The A4 may not be for everyone, but it has buckets of depth and provides an incredibly versatile set of sound design and sequencing tools to bend it to your will. 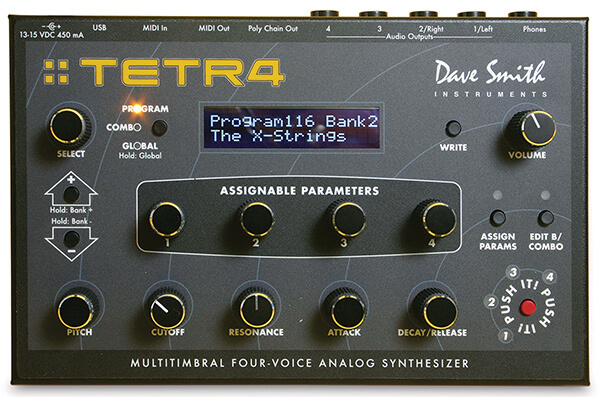 There’s not a lot that can come close to the A4 in terms of features. If you’re just after a four-part analogue box, then you could look for a second-hand Tetra. It has the Dave Smith sound, but the small screen makes it tricky to program. 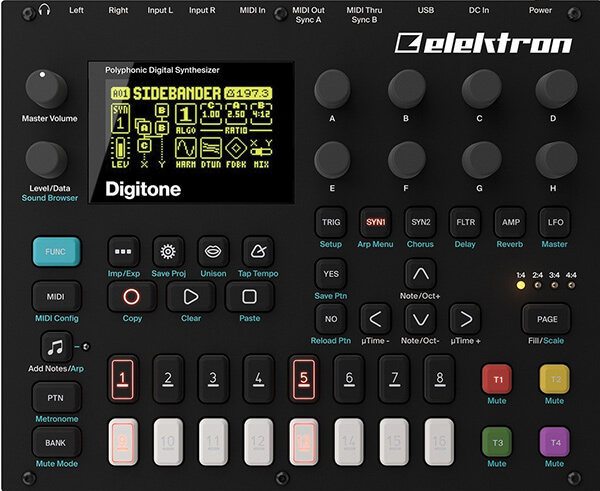 If you’re not worried so much about analogue sounds, then Elektron’s eight-voice FM synth could fit the bill. It features multiple FM algorithms, similar built-in effects and overdrive, plus the powerful sequencer and Overbridge.