Behringer recreates another classic synth, focusing on a favourite of artists such as Depeche Mode and The Prodigy. But can this budget version deliver the same delicious analogue sound? 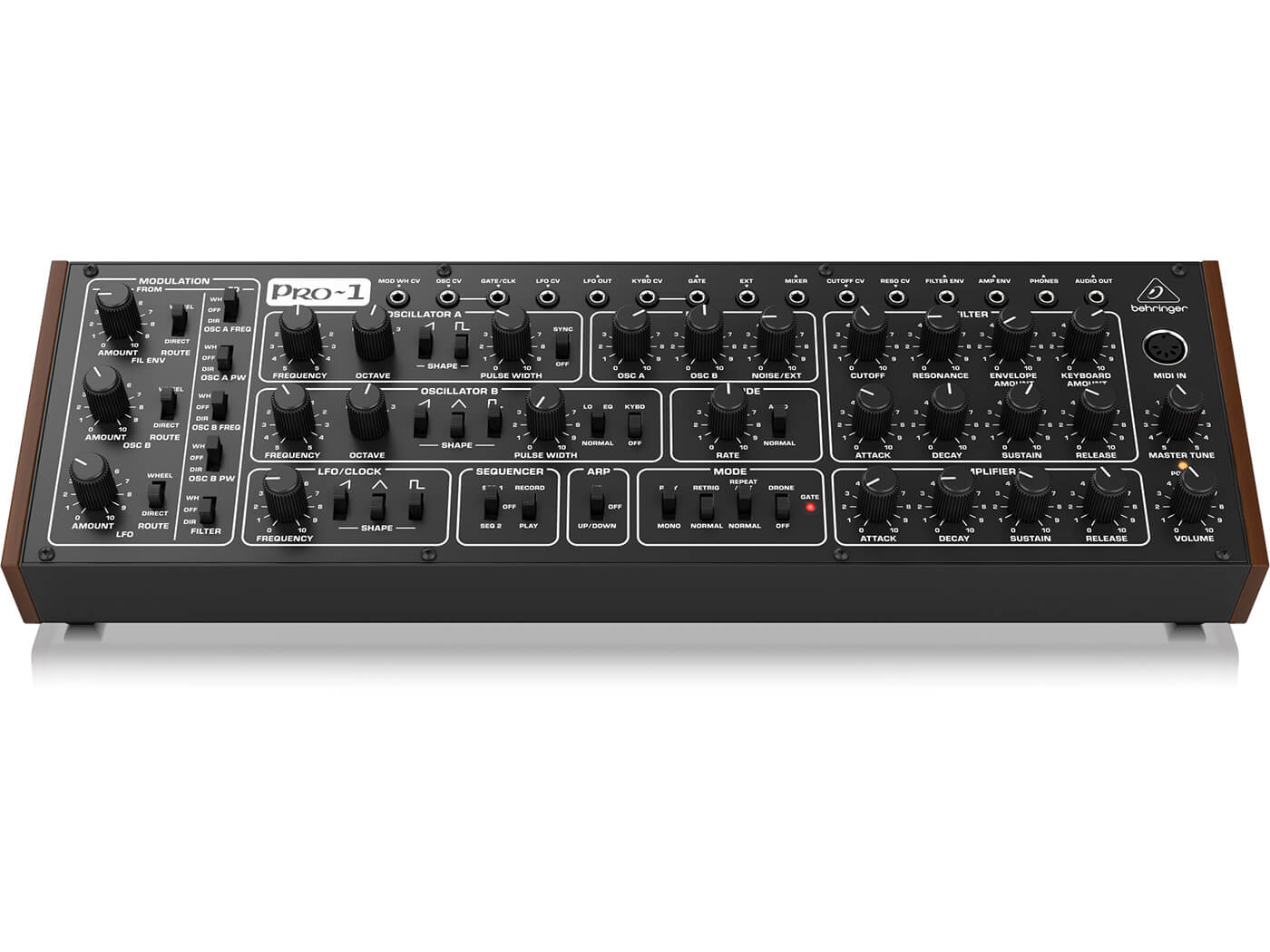 It’s been hard to ignore Behringer in the world of synths over the last few years. It has launched a relentless campaign of releases, bringing back classic designs at bargain prices. We’re not going to wade into the murky world of ethics, but instead, we’re here to take a look at the Pro-1, a faithful rack recreation of Sequential Circuits 1981 synthesizer. You will, no doubt, have heard it’s resonant tones on many records, with a host of artists such as Thompson Twins, The Prodigy, Depeche Mode, Vince Clarke, and more using it as their synth of choice. Can this budget version deliver the analogue goods, and how does it stack up to the original?

Visually, the Pro-1 closely replicates the original Sequential Circuits Pro-One faceplate, albeit in a slightly smaller frame. It feels relatively sturdy, with a metal body and removable fake wood side panels, just in case you want to mount it in a Eurorack case. The pots feel like good quality with some resistance that makes it easier to dial in small changes, but the switches let the side down as they feel a little loose and cheap. Of course, at this price, we’d rather the money went into circuitry than housing.

On to the synth specs, and we have dual analogue VCOs with three simultaneous waveforms. Both have pulse-width controls, and you can blend the levels using the mixer section, where you can also dial in a noise oscillator or an external input signal. You also have a sync switch on Osc A, and the ability to turn Osc B to low-frequency mode and detach it from the keyboard input to use it as an extra LFO.

With facilities such as waveshape blending, oscillator sync and pulse-width control, you can get a decent variety of timbres from the Pro-1. Listen to the sound examples below for examples ranging from warm and subby to piercingly bright, resonant and nasal.

The triangle wave on Osc B makes an excellent sub, and if you want a cleaner sine wave, you can use the capable 24dB/octave (4-pole) low-pass filter. The filter is characterful and squelchy, and at high resonances, it allows you to easily pick out frequencies, even moving into self-oscillation. The only downside with this filter design, like many others, is that you lose a lot of low-end as you increase the resonance, so you have to consider this when designing sounds. The filter has its own ADSR envelope, and there’s a snappy envelope for the amplifier, too. And a recent firmware update has made the amp envelope even snappier.

Finally, there’s an LFO with three combinable waveshapes, which also doubles as an internal clock. The LFO is one of three mod sources for the Pro-1’s unique modulation section. It takes a little getting used to, but it gives you three mod sources (filter envelope, oscillator B and LFO), and five destinations (pitch and pulse-width for both oscillators and the filter). These can be set to either the Mod Wheel bus or the direct bus.

For example, you can combine the Filter Envelope and Osc B sources to create a complex shape that modulates oscillator pulse-width. Then you can use the LFO via the mod wheel to create rhythmic filter movements. There are certain limitations to this system, but it’s quick to use, and it makes you try things you might not typically explore. 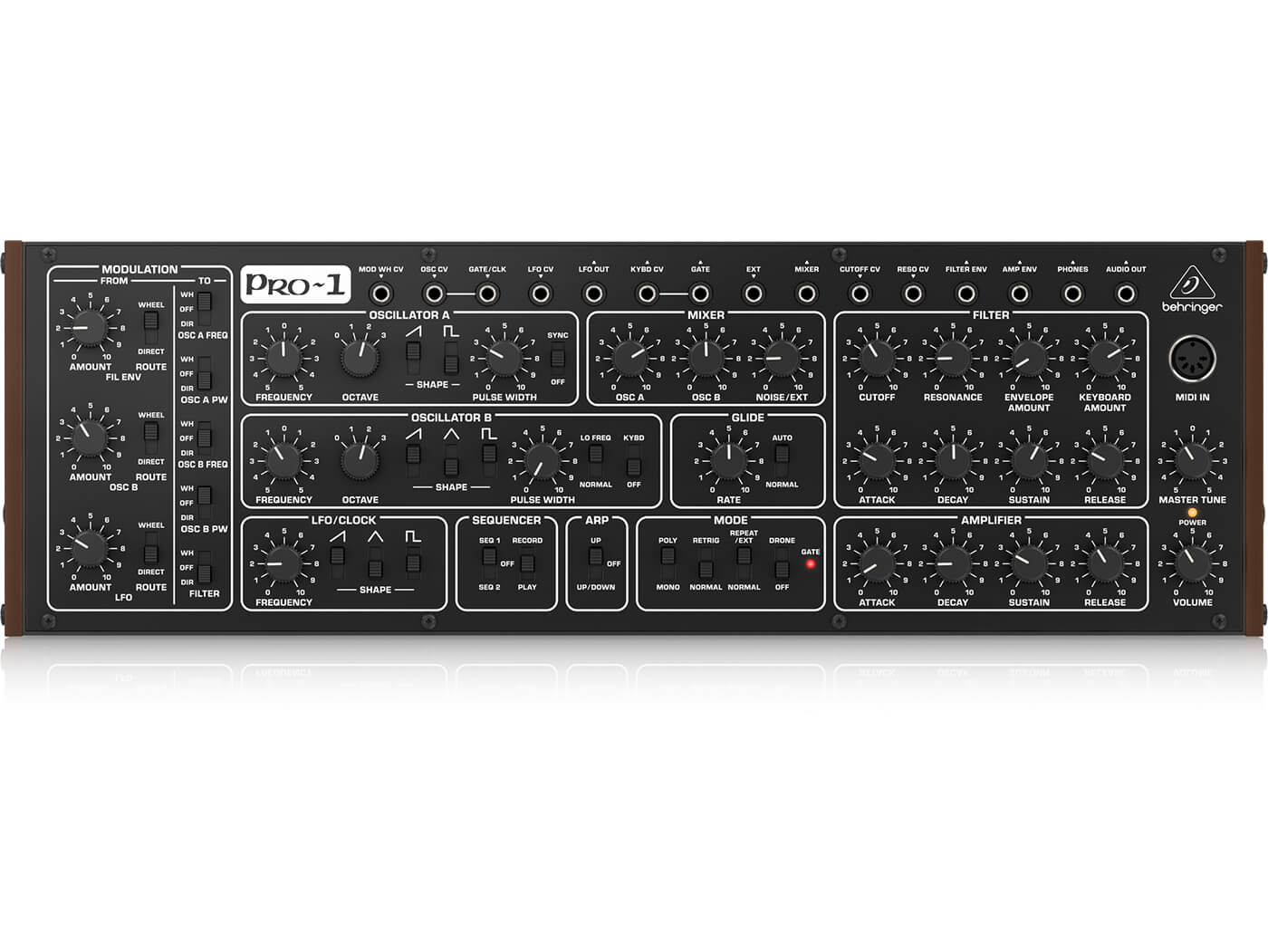 Luckily, Behringer has seen fit to expand upon the original’s sound design capabilities by including six additional CV ins and five outs. This lets you route the filter or amp envelope to resonance or send the LFO to the external input and play its pitch via the keyboard, giving you an additional oscillator. The CV connectivity also helps if you’re looking to interface the Pro-1 with other modular gear. Although it’s nowhere near as flexible as Behringer’s semi-modular Neutron synth, it’s a welcome addition on an instrument that otherwise plays it pretty safe in copying the original Sequential Circuits design.

The CV I/O also lets you create a bit of extra warmth. There’s no built-in distortion, but you can do the old trick of feeding the audio output into the external input. You have to be careful not to overdo it, but this can produce a pleasant touch of thickening saturation.

Elsewhere, Drone mode plays a single sustained note and Repeat mode rhythmically triggers the gate with speed controlled by the LFO/clock or an external source. Retrig selects whether the envelopes will be retriggered each time you hit a key when playing legato or if the notes will run into each other.

Mono/Poly lets you switch from the standard monophonic mode to two-note paraphonic mode. This enables you to play two notes simultaneously, but both sharing the same filter and VCA. There’s also a simple arpeggiator with up and up/down modes and a basic sequencer that lets you step record two sequences. Both are perfectly exceedingly straightforward to use. Finally, you have Glide with a normal mode and an auto mode that only glides when you play legato. 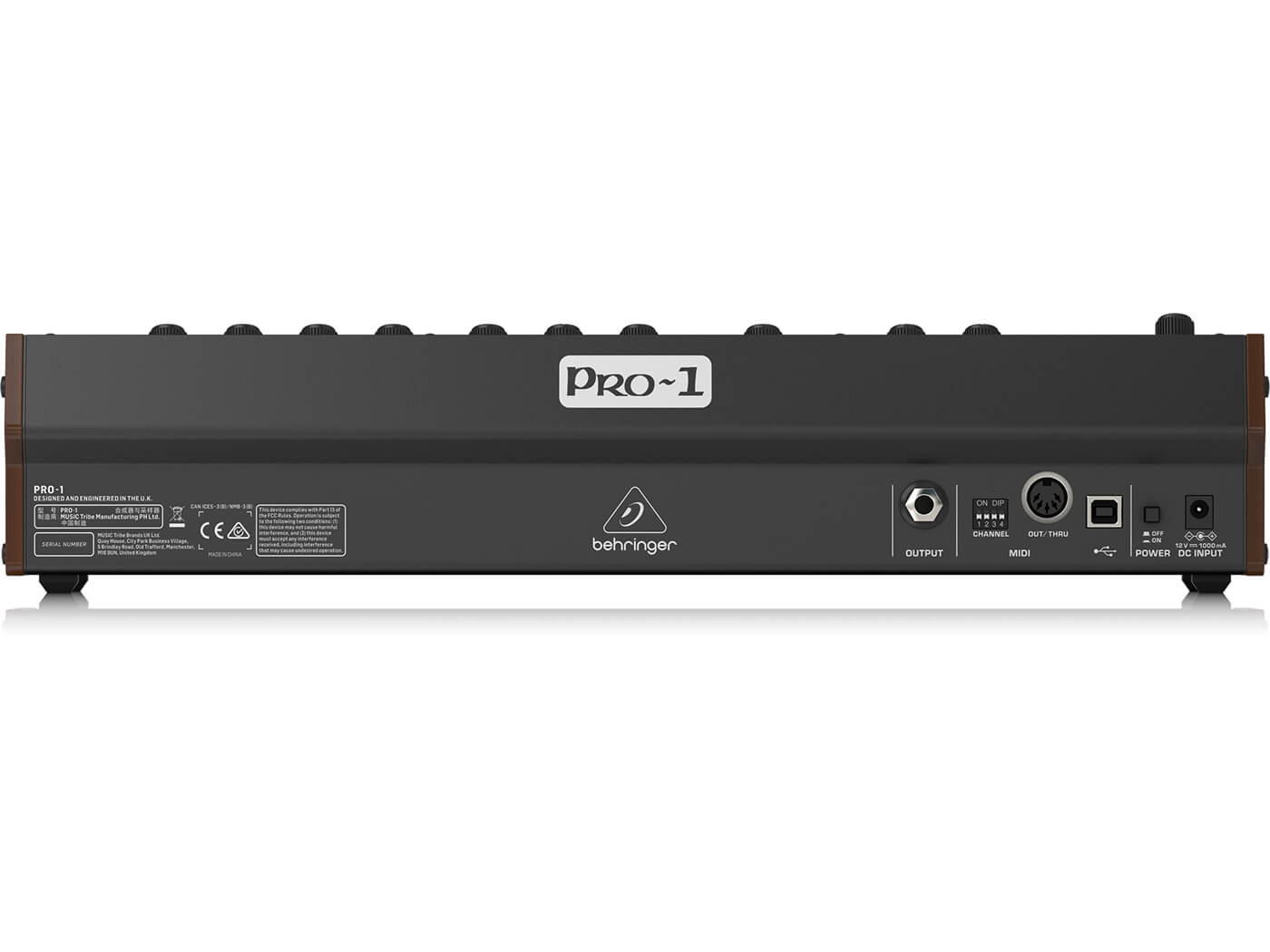 For connecting to more modern studio equipment, Pro-1 has both 5-pin MIDI I/O and USB MIDI, which is most welcome. Sadly though, MIDI implementation is limited, as it only receives note and mod wheel messages. Given that there’s no way to save presets, it’s a shame that full MIDI CC implementation isn’t included, as this could have opened up the possibility of saving via SysEx. We would have paid extra for this feature. However, if you’re used to using older analogue synths or using the Pro-1 for sound design, coming to the panel fresh for each session may not be an issue.

Small MIDI and build issues aside, there’s not much you can argue with when you’re getting this much synth at such a low price, especially as a second-hand original Pro-One will set you back almost £2,000. It may be budget in some areas, but sonically this is the real deal, and it consistently made us smile while playing. Behringer has taken great care to get it sounding as close to the original as possible, and it can easily replicate straightforward classic patches or make face-melting modern sounds. And if your wallet allows, you can even polychain 16 together. 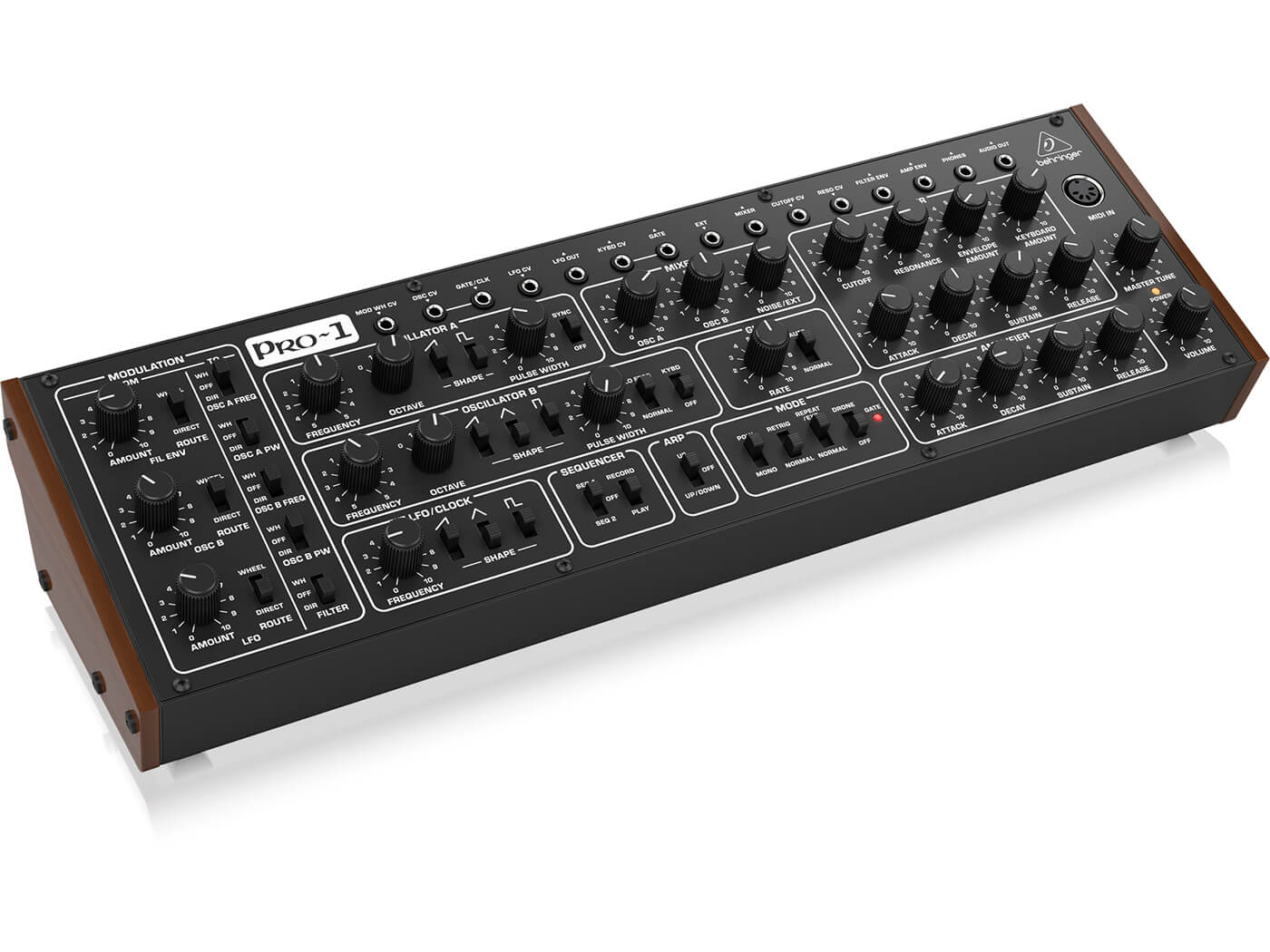