In the almost two years since its release, Akai’s Force has undergone some significant improvements. The latest update makes it even more appealling. 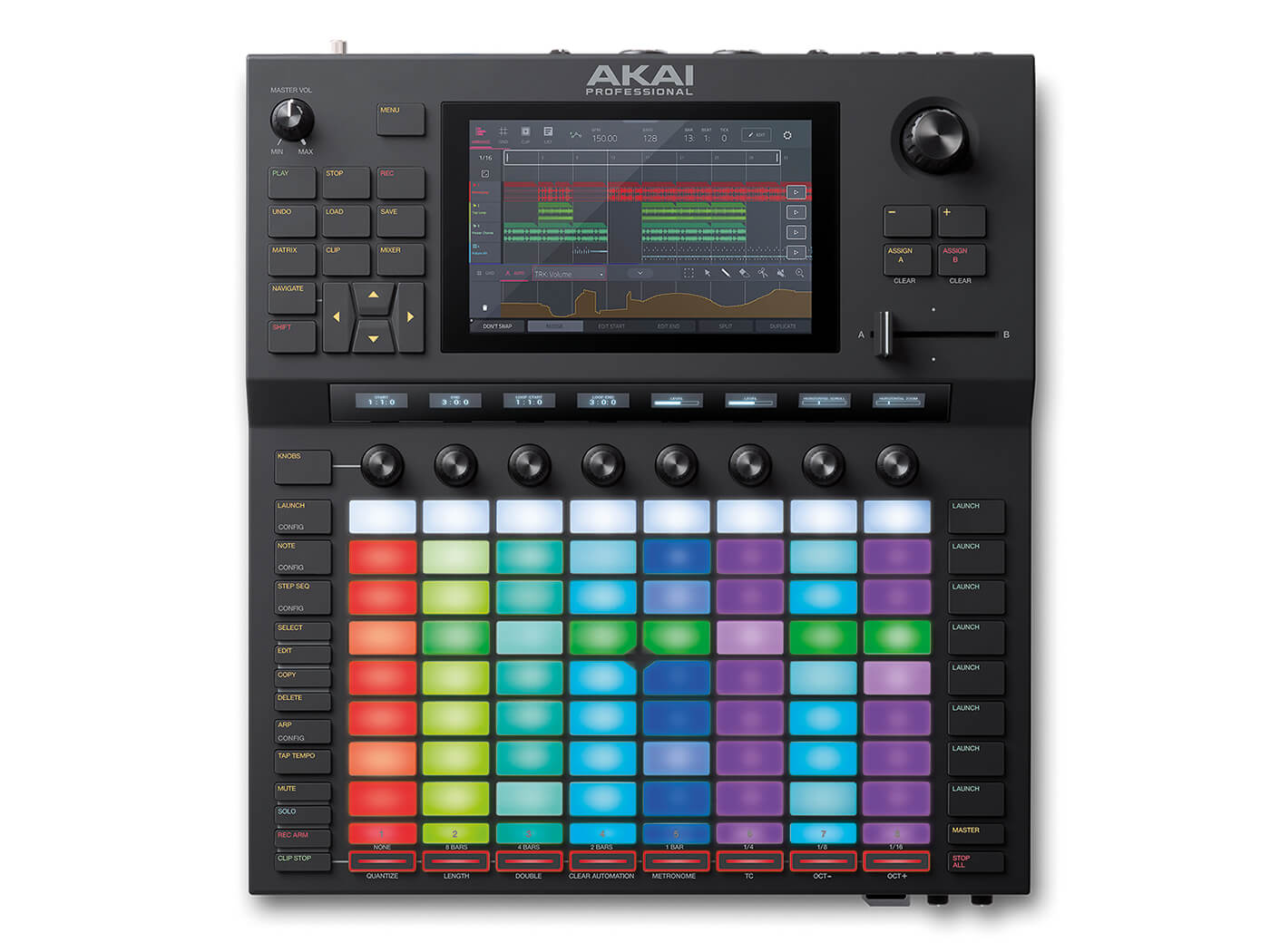 Released in February 2019, the Akai Force has since enjoyed a stream of firmware updates, the latest being firmware 3.0.5, released in October. The features added as part of this update are so monumental that it’s almost turned the Force into a new product again. We couldn’t let this update sink in without giving readers a thorough overview of it.
But first, let’s recap. The Force is a sampler and sequencer related to other Akai products such as the MPC Live. It hosts software instruments and effects, and features audio and MIDI editing tools. It can be used as a fully standalone unit, with no computer, or closely integrated with a computer, especially one running Ableton Live. With 64 pads, eight knobs, a seven-inch diagonal touchscreen, and audio, MIDI and CV gate connectivity, it’s a well-rounded hybrid between instrument and workstation.

A year in the making

Since our initial review of the Force, multiple updates have gradually built up its abilities. Update 3.0.1 arrived in February 2019 too, shortly following the hardware release, and included a new pad layout mode that combined clip and note launching on one page, and introduced the Mother Ducker sidechaining effects, along with a number of other small tweaks. Update 3.0.2 followed in April 2019, the big addition here being Splice integration – because the Force is wifi enabled, it was now possible to go online, sign into your splice.com account and download sample content directly to the hardware.

Update 3.0.3 came in July 2019, and here Force users gained the ability to draw in automation using the touch interface or via the physical control knobs, an ability backed up by a library of preset automation shapes included. As well as these enhancements to the standalone functionality, this update included a significant step towards integrating the Force with computers, thanks to its Ableton Live set export. Projects could now be exported to ALS files and moved to computers. Plus, when in computer mode, the Force could now act as a fully fledged audio interface.

Other changes included the ability to have incoming MIDI notes snap to scales,
a new mono lane for the step sequencer, and up to eight sub-mixes for the mixer. That’s quite an impressive feature expansion in anyone’s book.

Users had to wait a while for update 3.0.4, which appeared in March 2020. But they were rewarded with the long-awaited Ableton Live control. Now the Force could connect to computers using either wifi and the Akai Professional Network MIDI app or via an ethernet cable. It was never going to be as deep as the integration provided by Ableton’s own Push hardware but it offered a decent amount of control over clip and scene launching, plus mixing, recording, and instrument or effect devices. All this worked seamlessly alongside the Force’s own functionality too, making it easy to swap between Force and Live control during jams and without interruption. 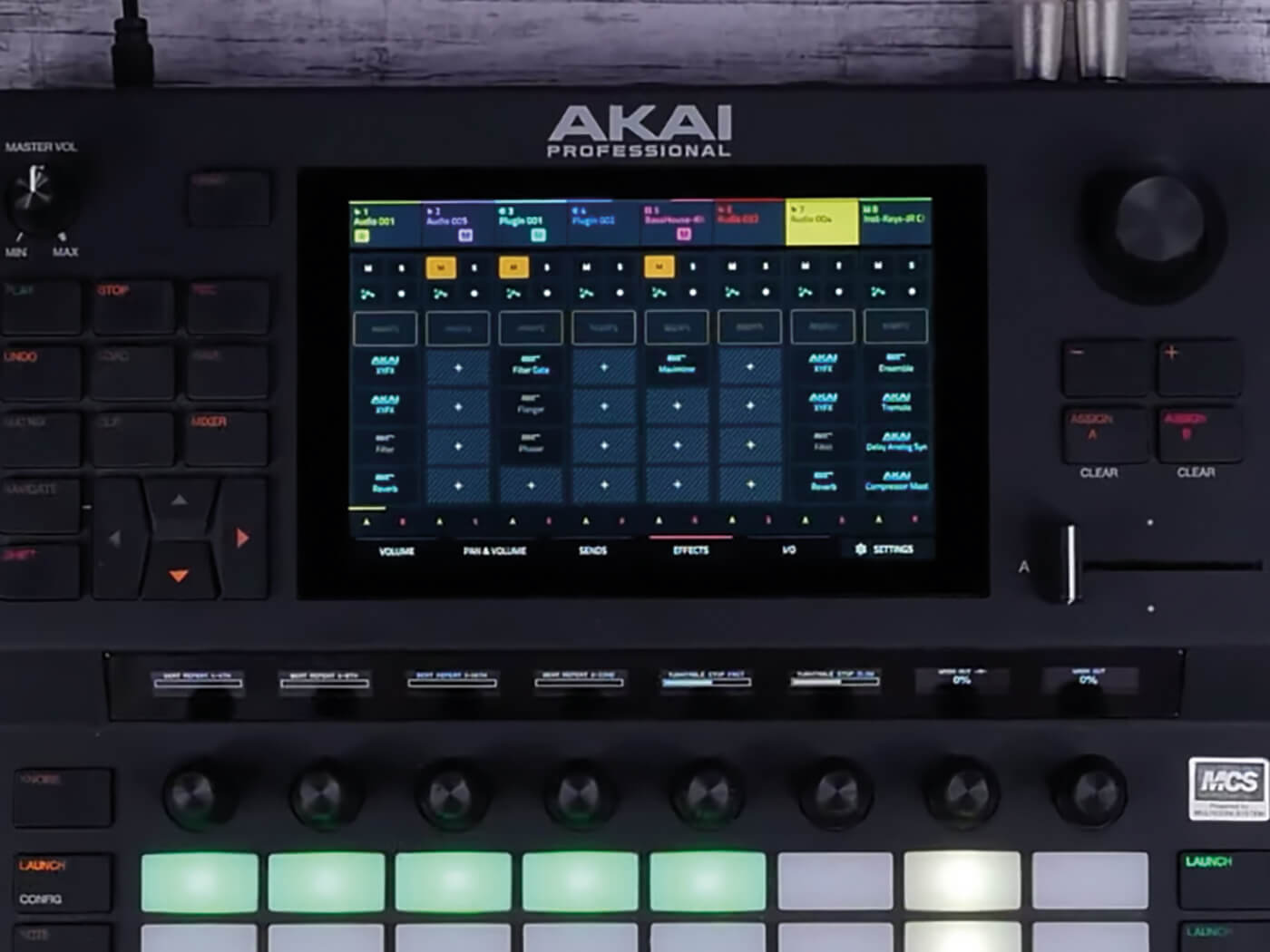 Following that March update, we arrive at 3.0.5, home to the Force’s most eagerly awaited feature: a fully fledged arrange mode, providing an onboard timeline-based sequencer with audio and MIDI recording and editing capabilities. Compositions can be built from scratch directly in the timeline or captured from performances via the clips and pads. There are standard copy, edit, paste and delete functions too. As with Ableton Live’s own Arrangement and Session views, you can play back whatever’s on the timeline, while launching clips and scenes simultaneously, so that performances can include precisely timed events, as well as more spontaneous elements, with the necessary buttons to revert to the printed arrangement too.

The timeline also displays arrangements from imported Ableton Live projects, if any are present. Working with such a detailed timeline on a hardware device such as this can give you the nerdy thrill of exhuming old Ableton Live sets, grappling with them in the Force’s arranger and twisting them into new and exciting shapes. Finally, after five firmware updates, Akai can now proudly state that its Force can now function as a standalone self-contained studio. You just need a computer to import the finished music, which can be rendered as stereo mixes or as separate stems, as WAV, AIF, MP3, FLAC and OGG files.
The Force’s ability to function alongside other gear is made easier by MIDI Multi, through which external MIDI gear can be connected via the Force’s already existing MIDI ports or via a powered USB hub. All your connected devices and ports appear in the Force’s MIDI/sync preferences window and can be renamed as required.

Alongside this, the Force can also record audio or MIDI on multiple tracks at the same time, which makes sense if you plan to connect more outboard, as does the new ability to include program changes on MIDI clips. 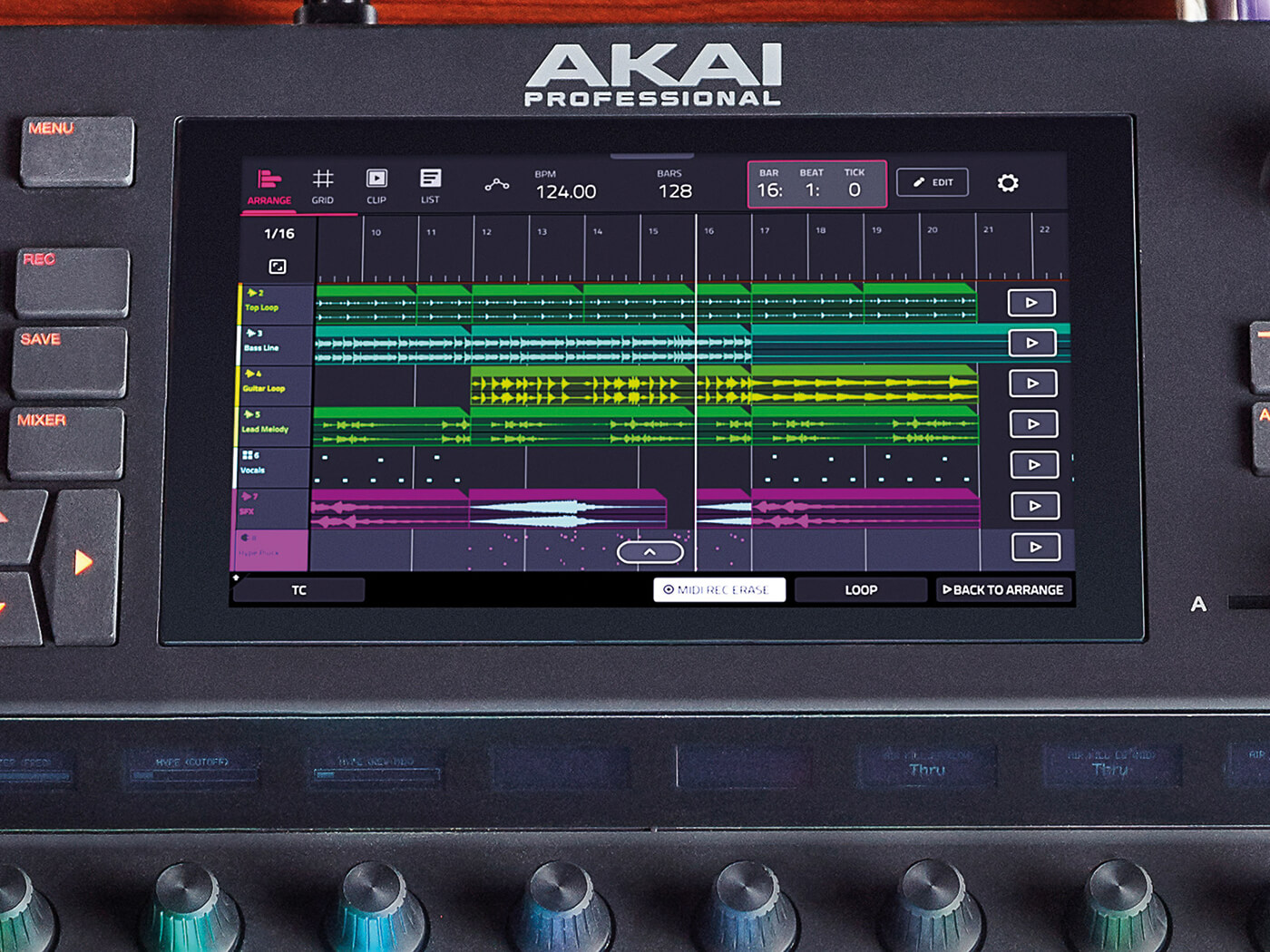 The bigger the better

Just as there’s been progress in enabling the Force’s to communicate with external MIDI devices, the new macro feature provides deeper control and interaction when
the Force is used independently. Macros (combinations of more than one control message) can be applied to the Force’s knobs, pads, screen and even crossfader, which didn’t get much use from us before but is now a much more functional control, with up to 16 saveable scenes of its own.

Each macro parameter can have minimum and maximum values assigned to it, so the controls don’t have to be simply on or off. There’s a lot of depth here. The 3.0.5 update also introduces a library of envelopes and LFOs to bring real-time modulation to any automation parameters in the project. For synth-lovers, this makes a huge difference in adding dynamic or organic qualities to the Force software instruments such as the Hype synth or keygroups.

As weighty as these new elements sound, there’s still more additions of note: there’s the new Pull Down menu, which is accessed by dragging downwards from the centre of the touchscreen and functions as a kind of context menu; there’s now a global automation recording button; the mixer now features a separate effects tab, from which the new effects racks can be loaded; chord progressions that you’ve recorded can be saved and recalled; specified tracks can be excluded from scene launches; the pad brightness is adjustable; and, finally, thanks to the new Retrospective Record function, the Force is listening to incoming MIDI events at all times, all of which can be captured after the event, even if you forgot to hit record beforehand.

These are strong updates, and 3.0.5 is an absolute gamechanger for disenchanted Force users and for those still mulling over its appeal. With a steady policy of additions and fixes, this unit has become everything it promised to be – well, almost. Hey, Akai, how’s it going with that disk streaming? 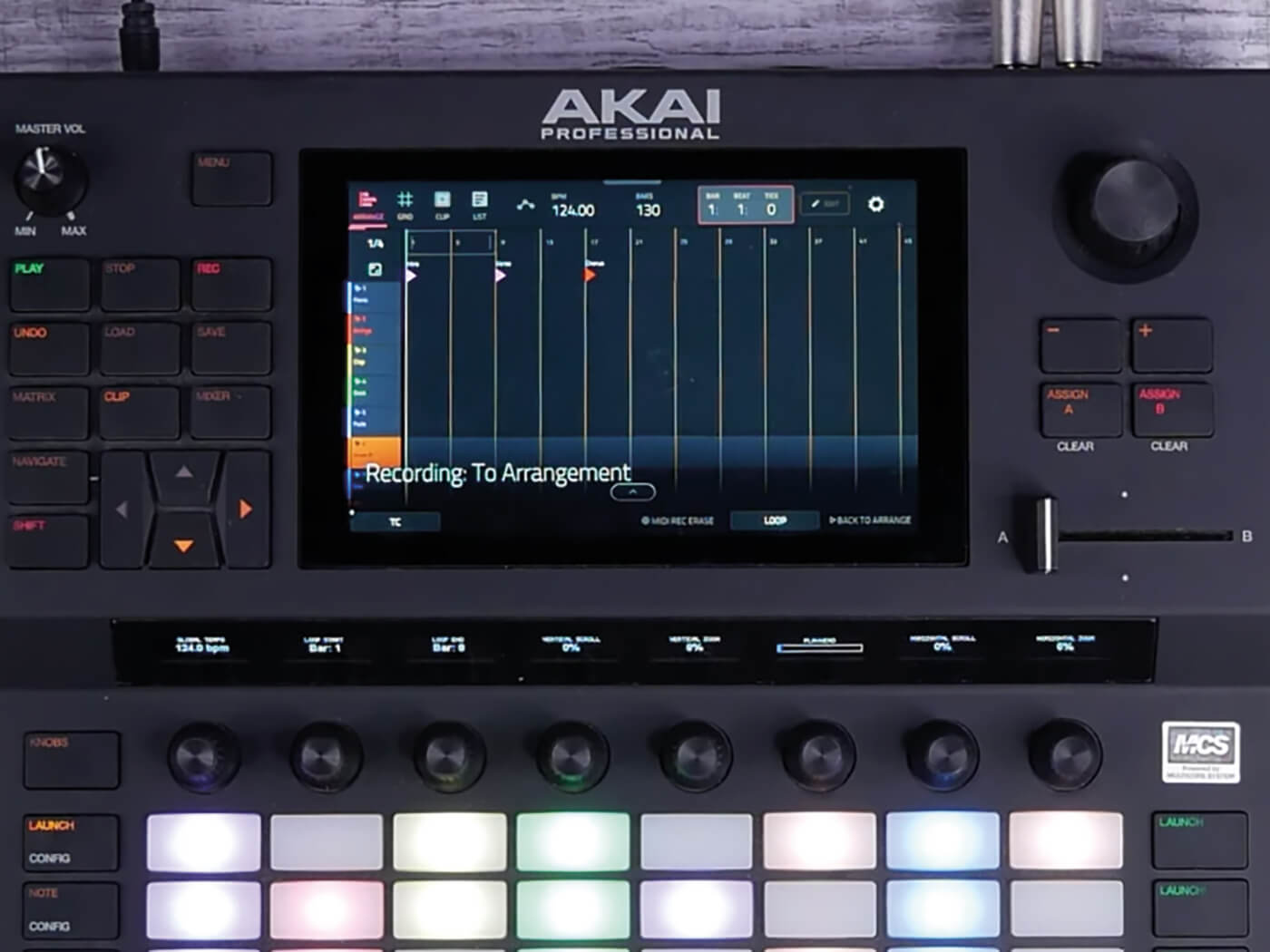 We’ve had the Force since writing our initial release review. Over that time, we’ve used it for sound design, live gigs, production and more. Gradually integrating the new features as they’ve been added has been fascinating. There’s been a price drop since the Force’s release too, which, combined with the strength of this update, make it a better-than-ever proposition for newcomers.

Having given its own Maschine a standalone makeover, NI’s new unit still integrates with the Maschine software on Mac and PC but is also an all-in-one sampler, sequencer, drum machine and audio interface.

A long-in-the-tooth sampler and sequencer, the Octatrack represents Elektron’s philosophies, which are miles from those of Akai. This is an eight-track machine that also functions as a mixer and effects device.