With Gothic Instruments’ new title, we may well have a build-your-own software – not hardware – instrument. Andy Jones drones on. And on… Details Product Dronar Hybrid Module Price £59.95 Contact via website Web www.timespace.com Every aspect of music production is being made more accessible with technology: from creating the perfect dancefloor beats to easy pro […] 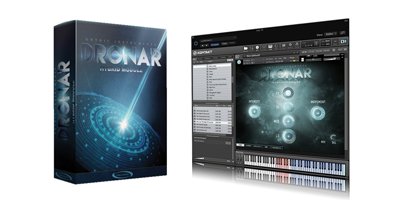 With Gothic Instruments’ new title, we may well have a build-your-own software – not hardware – instrument. Andy Jones drones on. And on… 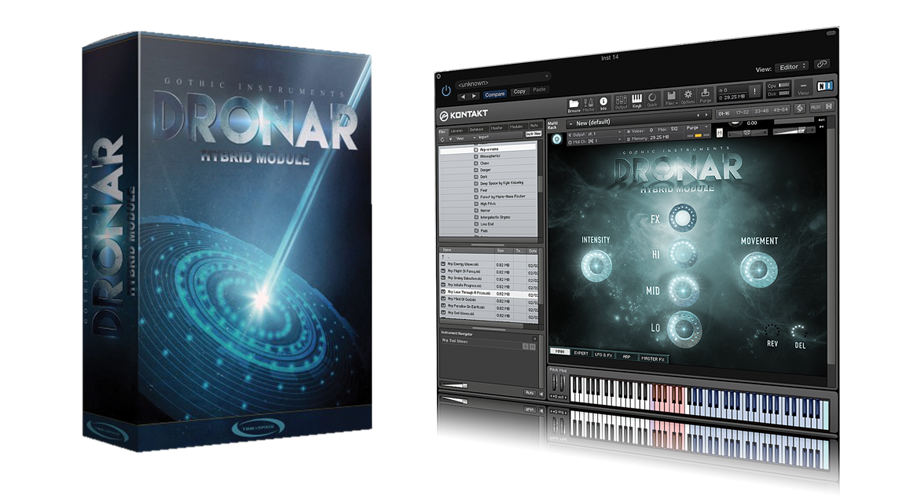 Every aspect of music production is being made more accessible with technology: from creating the perfect dancefloor beats to easy pro mastering. However, in more recent times, the target audience for software developers seems to have shifted to the soundtrack composer – or wannabe soundtrack composer – so we’ve had many libraries and instruments aimed specifically at them.

I’ve looked at a stack of these over the last couple of years, including fantasy favourites from Eduardo Tarilonte (Shevannai and Era) and sci-fi blockbusters from Heavyocity (Gravity) and Wide Blue Sound (Orbit).

While all very different, these collections do have one thing in common: atmosphere. They will help transport your music making to another place or time, so are ideal tools for the soundtrack composer. With the blockbuster soundtrack being so high-profile, and pop careers being so low-cash, everybody wants to be the next Hans Zimmer rather than the next Eurovision entry, so collections like these are becoming almost as ubiquitous as analogue synths.

Dronar Hybrid Module is the first release from the superbly named Gothic Instruments. It’s an instrument aimed at the soundtrack artist but also one designed to stand out from the rest. 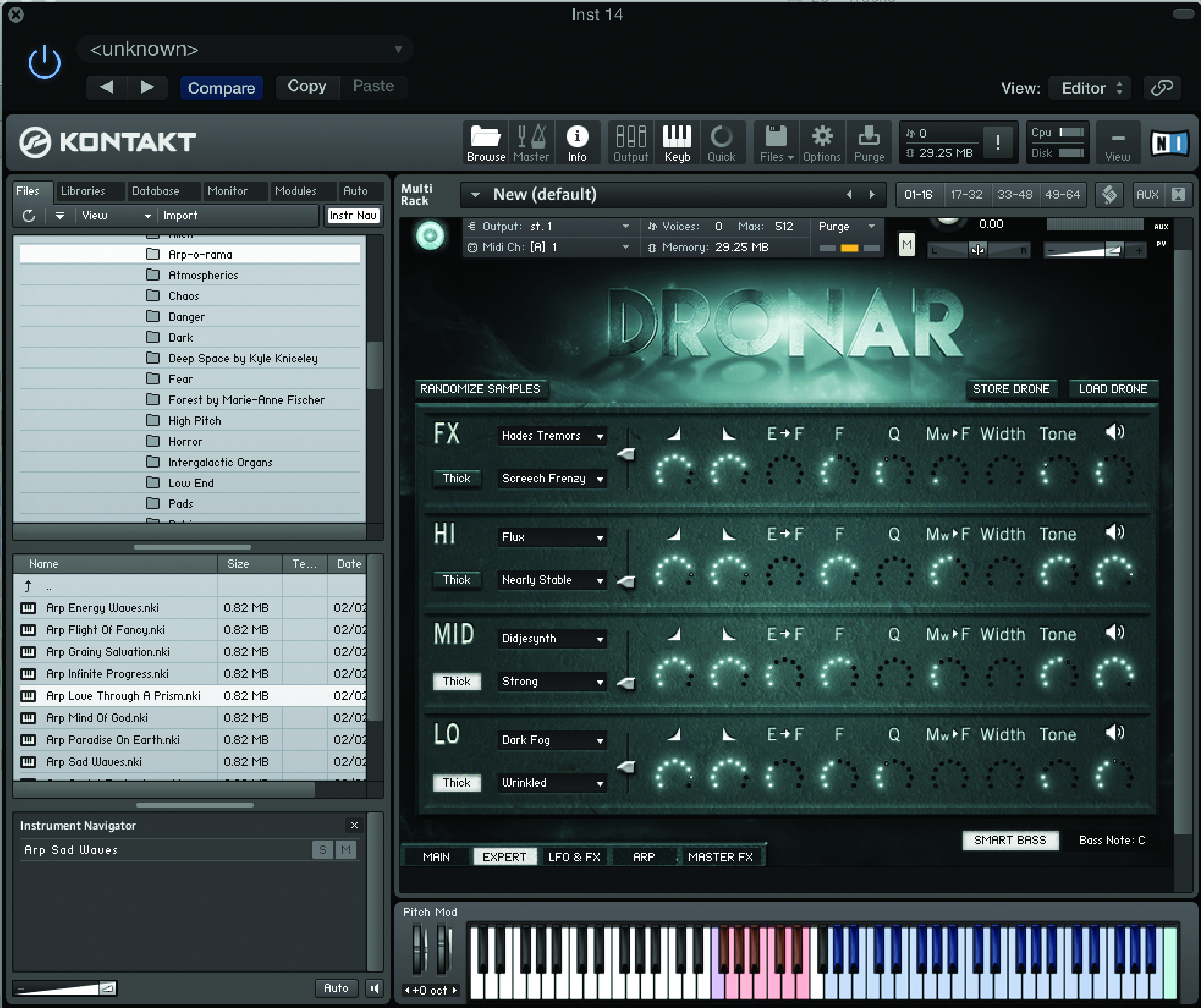 Modular Software
The first reason for this is its modular approach. The instrument is being released in blocks of downloads, hence the low price, which is an interesting approach (we love modular synths, so maybe we’re seeing the start of DIY software – see the box below for info).

Secondly, Dronar is setting its sights on specific soundtracks, not more general scores. Clearly all about dark, twisted atmosphere (the company’s called Gothic Instruments, after all) and it’s pretty obvious what you’re getting. If you’re doing the soundtrack to Dumb And Dumber 3 or Meet The Fockers 17, you might want to exit this page now.

The library installs pretty much like any other Kontakt library, although it’s the type where you don’t get the fancy NI graphics – you load instruments and presets via the more standard Kontakt finder interface. The 20 categories have self-explanatory names like Alien, Low End, Pads and Chaos, plus 300 preset sounds spread between them. Auditioning is as easy as you’d expect with it being Kontakt-based, although load times are occasionally a little long.

The first few categories of Alien, Atmospheres and Dark are exactly that. You may feel slightly underwhelmed by ‘otherworldliness’ – it’s a tad samey. But the strength is the simplicity and how a few controls on Dronar can do so much.

The producers of Dronar deliberately held back on the number of controls just to see how much control they could get from a simple set-up, and I think it’s one of Dronar’s main strengths.

You get a couple of effects (which can be varied) plus controls for Hi, Mid and Low, which vary actual sounds within those EQ ranges rather than just the frequencies. Then there’s an Intensity dial linked to your mod wheel and a Movement dial, and that is pretty much it. One or two of these controls will easily take your sound away from what you start with, and very quickly, too. So if you do think they’re a bit, well, ‘droney’, then get hands-on – it’s easy.

You can dig deeper, of course, but you’ll get a good idea of the scope of Dronar with just the top level. Step down into the ‘Expert’ page and you can define which of 30-plus parameters can be affected by the main controls (you don’t really need to be an ‘expert’ to be here to be fair), and you can also delve deeper into the arpgeggiation and LFO features with their own dedicated pages, too.

The later sound categories are much more musical than earlier ones, which perhaps emphasise the ‘drone’ part of Dronar. The strings are superb, the organs suitably dramatic and the pads as creepy and menacing as you’d expect. In fact, I’ll leave it to three more category names to sum up the rest: Fear, Tension and Dark. So, if you want to give it some kind of Hans Zimmer ‘rating’, Dronar is definitely more Interstellar than Going For Gold [clever Zimmer reference there for UK readers of a certain age – Ed]. 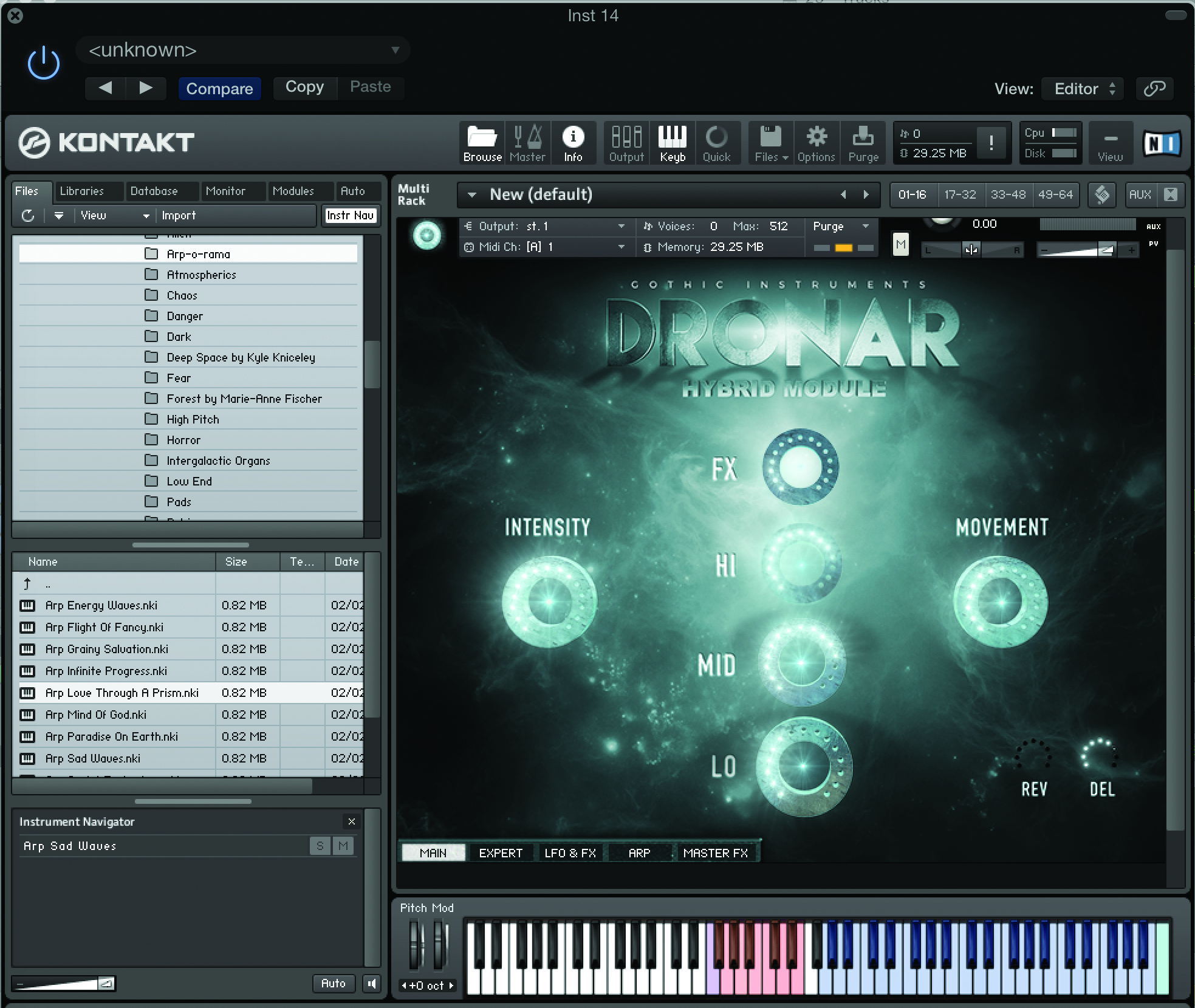 The Expert Tab
On a basic level, Dronar is very, well, basic, with six controls for big dramatic changes. Hit the Expert tab, though, and you get access to around 30 extra parameters as drop-down menus for the main controls, plus other controls like attack and decay.

The Arp Tab
Like the Expert tab, the Arp tab allows you access to more parameters from the top-level controls. And like the Expert tab, you don’t really need to be an expert! Here, you can adjust the Intensity, filter and arpeggiator steps and rate.

Master FX
Here, edit your effects on a deeper level with distortion and chorus (shown in this picture). With reverb, you get a drop-down menu, too.

The First of Many?
The reason we’re going to town on Dronar is terms of a lengthier review is that it purports to be the first of several modules under the Dronar moniker. This collection/instrument is called ‘The Hybrid Module’ and if you buy into it for the not unreasonable sum of £59.95, you’ll get further downloads and additions cheaper. The idea is that these are released every couple of months, as Gothic Instruments head honcho Dan

Graham explains: “We realised that it would take two years to create all the audio content we wanted, so we thought – why not release the project in modules? This means getting a new module out every two months until finally we can bundle it all together into a giant Master Dronar in a year or so. Until then, this approach means users don’t have to wait until 2017, and also each module is quite attractively priced, making it a good chance to try it without breaking the bank.”

Alternatives
I’ve already hinted at the collections and instruments I’ve used which are similar to Dronar, including Wide Blue Sound’s Orbit ($150 www.widebluesound.com) and Heavyocity’s Gravity ($449, www.heavyocity.com), both big, evolving sound makers and manglers, perhaps without the total darkness that this has.

Elsewhere in MusicTech, we’ve also looked at Output’s Signal (£150, www.outputsounds.com) which is an incredible instrument for drones and other atmospheres.

Conclusion
The Hybrid Module – the first Dronar release – didn’t surprise me in what it could do in terms of atmosphere and tension, and it very much delivers its menace in spades. As an opening module of possibly many, it is very good indeed.

Initially, you might think it’s a bit of a one-trick pony, but there are enough strings and melodic folders to take it on more musical journeys, and it also features so many parameters just under the skin that you can easily move onto newer things.

The Movement and Intensity dials alone will have you off exploring new sonic paths and there is more than enough content to experiment with…And that may well prove to be the downfall for Gothic Instruments’ modular plans – there might just be enough in this pack to suffice! Either way, with just £60 needed to start your dark and atmospheric journey, I think it’s one well worth taking. 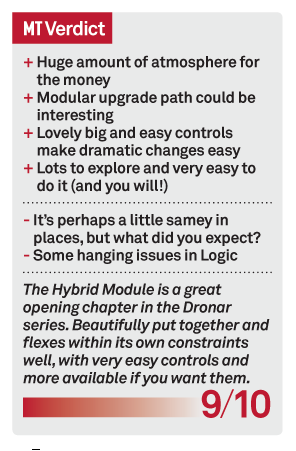