It may look like the 6010, but with newly designed amps and XLR inputs the Genelec 8010A promises to be a pro-quality monitoring system that you can carry on the bus. Huw Price downsizes Details Price £259 each Contact 020 8962 5080 Web www.genelec.com Although clearly described as ‘extremely compact’ the bijou dimensions of the 8010A still […] 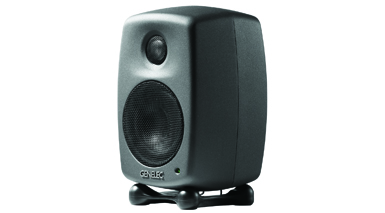 It may look like the 6010, but with newly designed amps and XLR inputs the Genelec 8010A promises to be a pro-quality monitoring system that you can carry on the bus. Huw Price downsizes 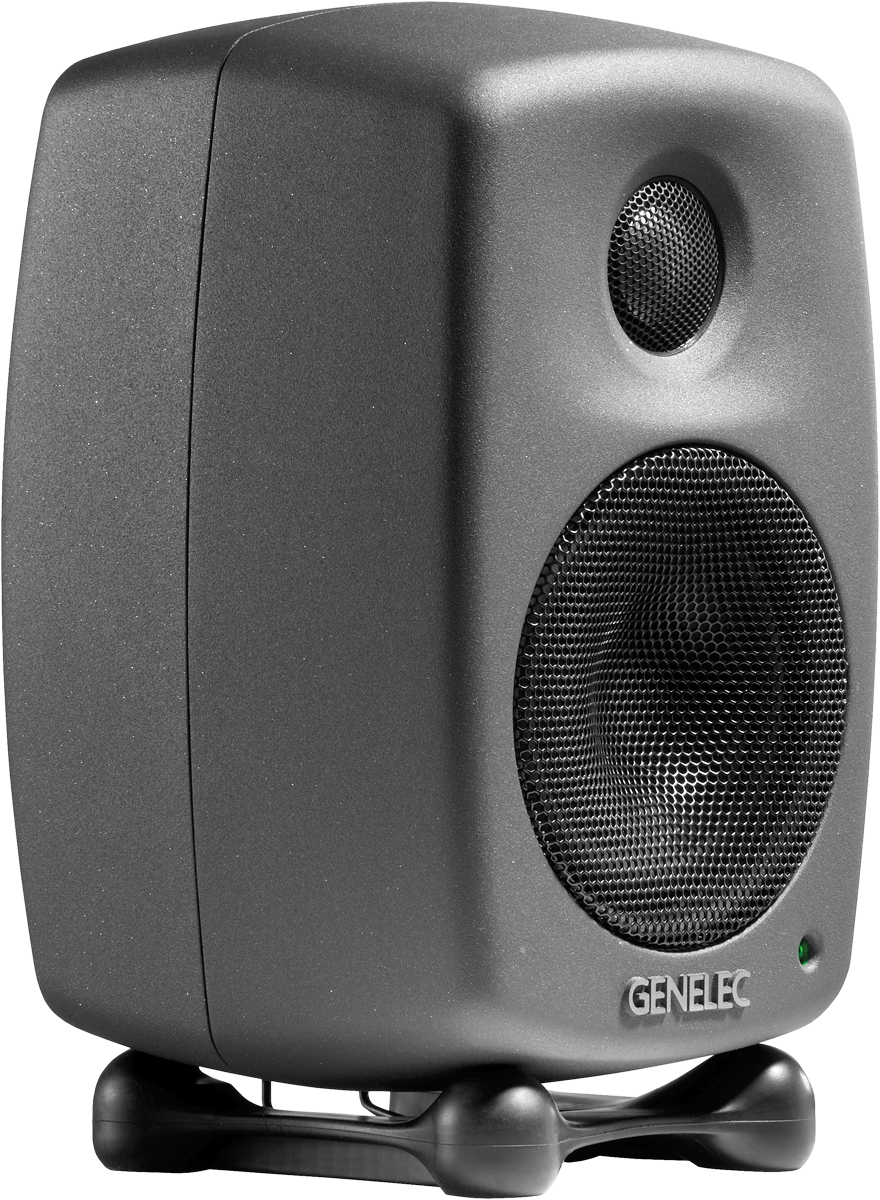 Although clearly described as ‘extremely compact’ the bijou dimensions of the 8010A still came as something of a surprise when we took them out of their packaging. Designed to enable “professionals to work in compact studios and on the move” they’re so small that you could probably use them in a cupboard. The promotional shots showing a user putting a pair of 8010A monitors into a shoulder bag are entirely plausible.

With that in mind, Genelec protect the woofer and tweeter with metal covers and all the connections and switches are tucked neatly out of harm’s way. As well as being portable, Genelec also promises that the 8010A is an accurate monitoring tool, but we’ll get on to that later.

Although the 8010A physically resembles a computer speaker more than a conventional studio nearfield, it’s a relief to discover that it get its juice from the mains rather than a wall wart. There are no fiddly link cables and each unit has its own Class D amplification and controls.

Size Matters
The 3in woofer gets 80W of power and the ¾in metal dome tweeter gets 50W. This might seem a bit like dropping a V8 engine into a Fiat 500, but it’s all about headroom rather than sheer volume. The input connector is a balanced XLR input but it can be connected to an unbalanced source using a suitable adaptor. 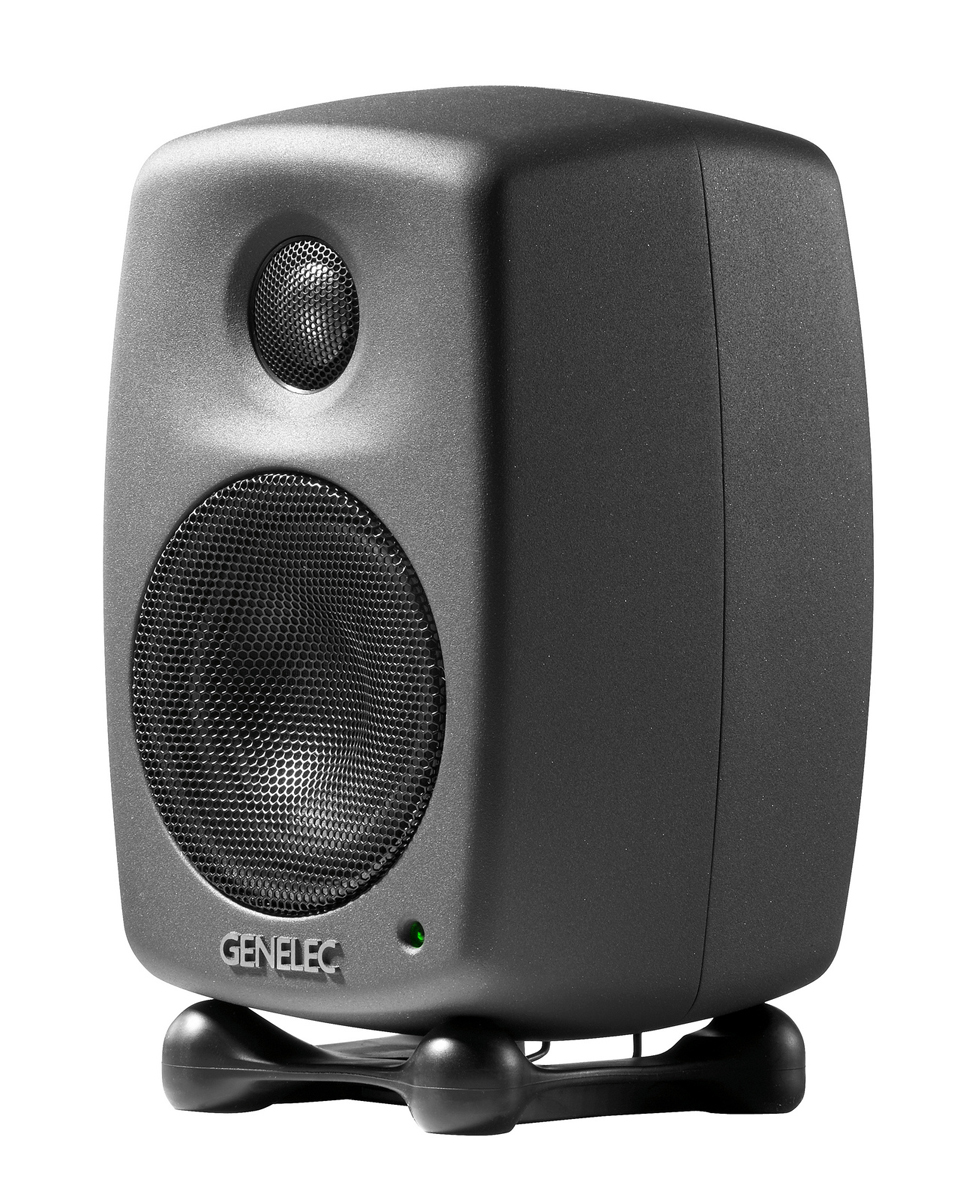 Another feature is Genelec’s Intelligent Signal Sensing (ISS) circuitry, which switches the monitor to standby when no audio input is detected. Switch on takes about half a second, but owners who find this hard to live with can disable the ISS function.

Another dipswitch sets the input sensitivity. The default setting is ‘Normal’ – predictably enough – and the dipswitch changes this to -10dB.

Genelec advises that you choose the setting that provides the desired playback level and resolution for your system’s volume control.

Frequency response adjustment is next up. Bass tilt provides three levels of attenuation: -2dB, -4dB and -6dB at 100Hz. In addition the Desktop Control switch activates a 4dB cut at 200Hz. The manual includes a very useful chart with suggested settings for various working scenarios. For instance, the recommended Bass Tilt settings are -2dB for reverberant rooms, -4dB for proximity to walls and -6dB if the 8010A has to be placed in a corner. 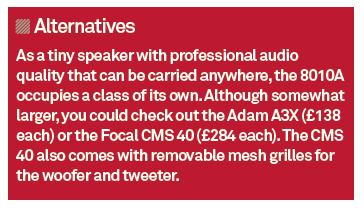 Full Tilt
Genelec’s four-cornered rubber base is one of our favourite features. As well as providing anti-slip decoupling, a clever metal clip attachment enables the 8010A to fire upwards and downwards as well as straight.

We started with the 8010A placed on top of our usual monitors and aimed them down. Then we placed them on our desktop and aimed them up. It’s a simple and elegant solution that ensures the tweeter is always directed towards your ears. Alternatively the 8010A can be mounted on a bracket or stand.

Just like the pictures, the sound belies the actual size. Only this time it’s way bigger than you would ever expect. Admittedly our listening room isn’t especially large, but the 8010A filled the space with crystal clear and wide open sound.

Fired up next to a pair of Focal CMS 40s we had to touch the cones on more than one occasion to determine which monitors we were listening to. The Focals were a touch softer and smoother, while the 8010A displayed the more airy and open treble that many would associate with Genelec. 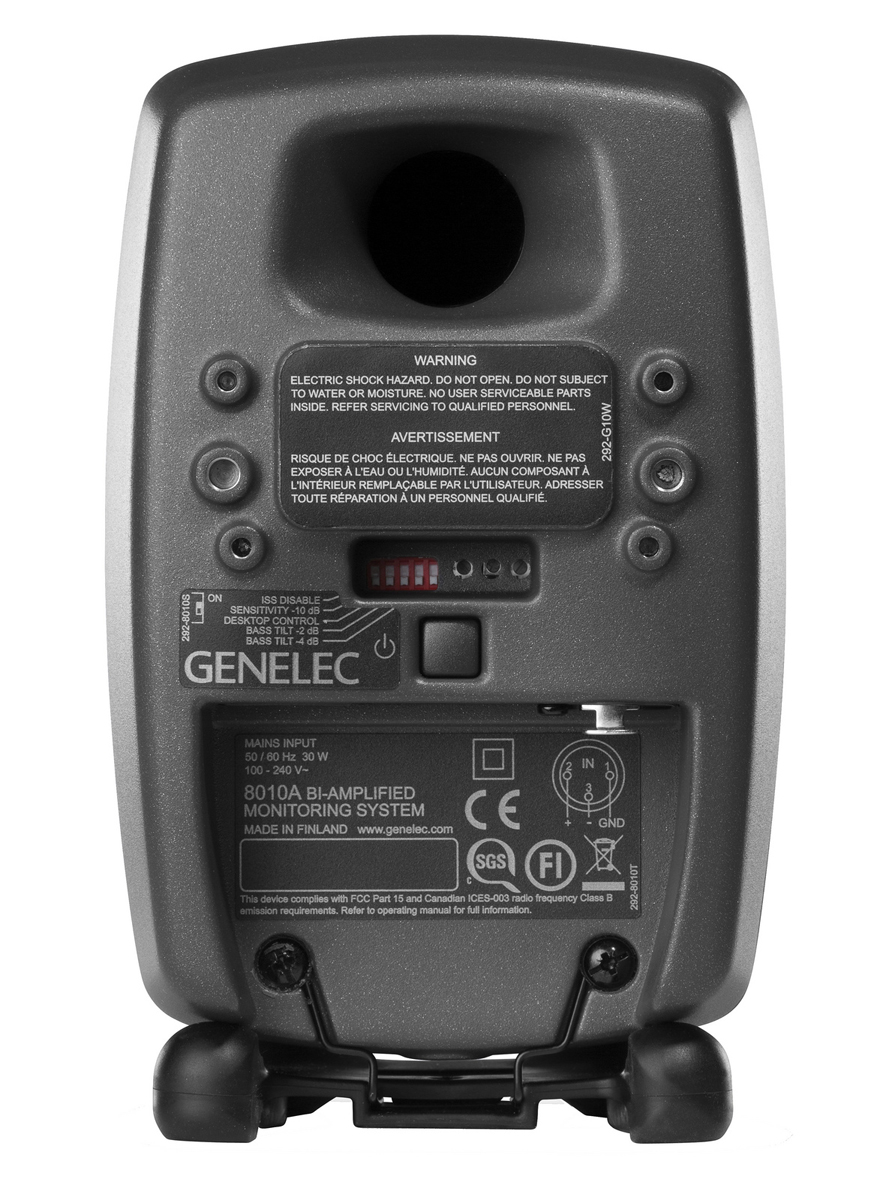 Granted, the bass extension isn’t exactly bowel troubling but we have used monitors with enclosures two or three times the size that would struggle to convey quite as much bass energy. When set up as conventional monitors we felt quite happy mixing on the 8010s right away. It’s also interesting to note that the 8010A is compatible with Genelec’s 7050B subwoofer.

Placed on a desktop either side of a computer screen the results were still impressive, but we opted to augment the desktop filter with a -4dB bass tilt to tighten the low end (your experience may differ depending on the resonance of your desk). To summarise, the word that springs to mind is ‘extraordinary’. 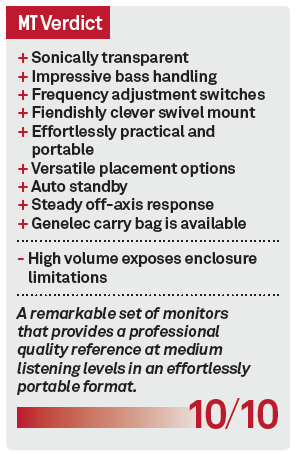