Fanfare presents a unique take on the sound of the Blue Devils Marching Band. Mark Cousins polishes his brass. 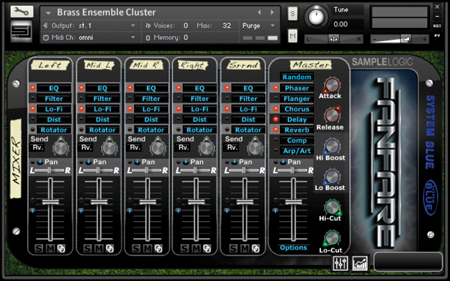 Fanfare is the latest release from Sample Logic, following hot on the heels of Rumble, which we reviewed in Issue 104 (November 2011). Both libraries draw on parts of the legendary DCI World Champion Blue Devils band, with Rumble highlighting the power of the percussion battery, and Fanfare, logically, offering us the sound of the band’s powerful brass section. Fanfare, however, isn’t a traditional brass library (like Hollywood Brass, for example, or CineBrass), instead bringing us the unique sound and line-up of a marching band brass section as well as a host of unhinged sound-design treatments based on the original samples.

As with Rumble, Fanfare is clearly divided into both a Traditional section – which features multisampled versions of the original instruments – and a Morphed folder that includes the various sound-design treatments applied by Sample Logic. Despite using ‘conventional’ brass instruments (such as trumpet, trombone and tuba) the line-up in the Traditional folder is somewhat different from that of a traditional orchestral brass section. On a positive note, this approach means that you get access to instruments such as the mellophone and euphonium that you rarely find elsewhere, although you miss out on French horns, for example, and ‘sectional’ trombones.

The range of articulations included in the Traditional folder covers a good spread of playing styles, although the precise list varies from instrument to instrument. In particular, the trumpets are lavished with falls, shakes, crescendos and squeeze runs (among others), which provide an expressive range of colours to orchestrate with, although there’s no ‘true legato’, as found in some of the more recent orchestral brass libraries.

All of the instruments have been recorded with three mic sets (close, mid and far), which provide plenty of sonic scope with regards to the use of natural room ambience and the ‘space’ around the samples.

One of the more interesting and unusual elements in the Traditional folder is the so-called Stadium ensemble. The Stadium samples were recorded with an 85-piece brass section performing a range of chord and cluster effects, as well as a variety of other ingenious brass FX sounds. The Stadium ensembles have a suitable scale and grandiosity to them (especially given that they were recorded in a football stadium) and could certainly work well for brass-rich trailer effects such as those featured in the Matrix trilogy.

Following on from the excellent morphed instruments included in Rumble and Cinematic Guitars, Fanfare also presents its own range of atmosphere, impacts and unhinged instrumental sounds. More than being an added extra, these morphed sounds form an intrinsic part of Sample Logic’s offering and are well worth considering in their own right. The range of treatments and effects are, as usual, superb, covering everything from eerie ambiences (all neatly organised in mood-based folders) through to a number of arpeggiated sounds that sound surprisingly electronic given their source material. As before, there are also some great Multis (especially in the ‘One Note Glory’ folder), which perfectly illustrate how the sound-design patches can be dynamically layered and triggered to great cinematic effect.

Fanfare undoubtedly meets the high standards that we’ve come to expect from Sample Logic, although it’s a somewhat difficult product to place. The marching band approach is undoubtedly valid, but it could limit those looking to score more traditional ‘filmic’ brass parts, especially by comparison to some of the recent dedicated brass libraries (such as CineBrass or Hollywood Brass). The Morphed sounds certainly add to the value of Fanfare, but they don’t significantly add to what can be achieved with Sample Logic’s other excellent offerings.

Taken on its own, though, Fanfare is certainly an imaginative take on the marching band sound, which is next to impossible to find in other libraries. The creativity applied in the sound design alongside the wealth of patches on offer make Fanfare a worthy library to have at your disposal, and perfect for scoring an edgy contemporary trailer.

Fanfare offers some intriguing marching band brass samples, but it’s arguably the Morphed instruments that are the most useful part of this package.