EZdrummer 2 Review – EZ Does It

Toontrack’s latest revision of EZdrummer has plenty of bold and innovative new features. Mark Cousins finds the perfect beat. Details Manufacturer Toontrack Price £99 Contact Time + Space 01837 55200 Web www.Time + Space.com Over the last five years the virtual drummer has evolved from an instrument that (at best) sounded like a real kit, to a […] 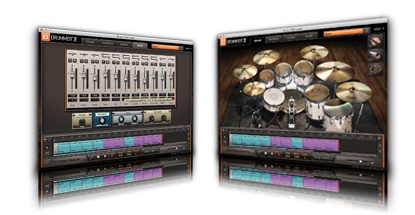 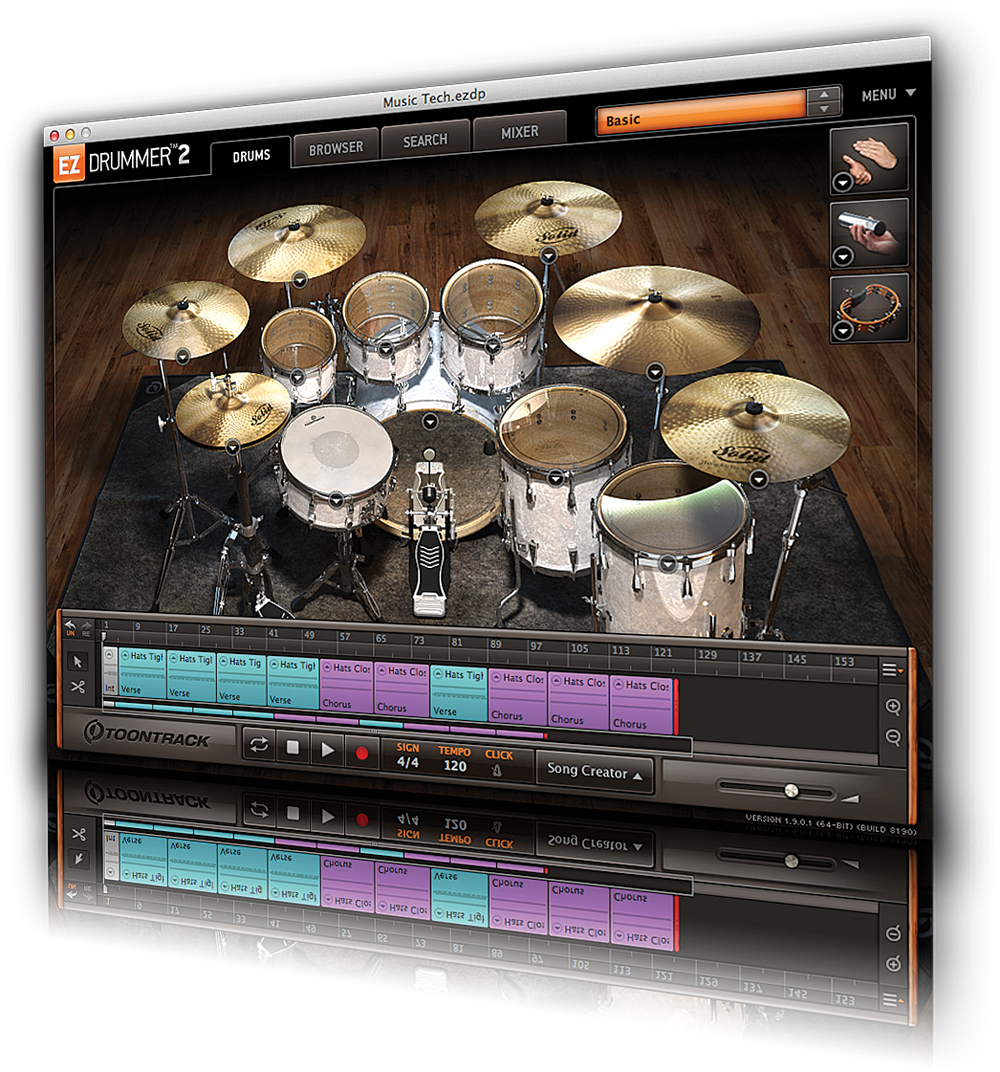 Over the last five years the virtual drummer has evolved from an instrument that (at best) sounded like a real kit, to a tool that forms the backbone of your rhythm section. So we’ve come to expect more from our virtual drumming software – not just a collection of MIDI loops, but integrated mixing software, kit customization and more besides.

Even the off-the-shelf DAW has got in on the act, with Logic Pro X’s Drummer feature being one of the best integrated solutions we’ve seen, so any virtual drumming software offering something new has a lot of work on its hands! 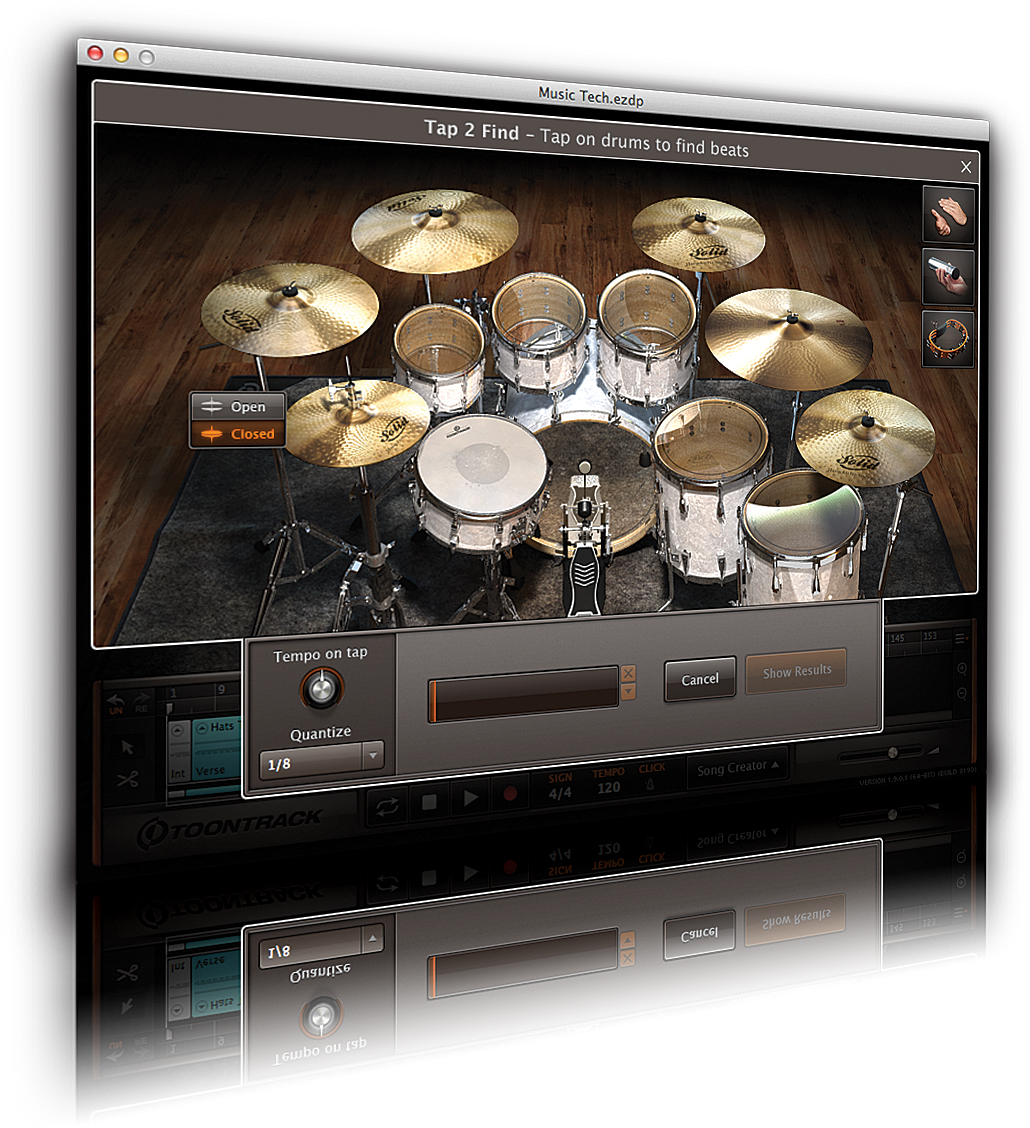 EZ Does It
As one of the more cost-effective solutions on the market, Toontrack’s EZdrummer has built up both a large user base and accompanying sound library. Borrowing many features from Superior Drummer 2.0, EZdrummer offered immediate, great-sounding results with the minimum of fuss. However, with the world of virtual drumming moving so fast, it was clearly time for a refresh – providing a tool that still had the same immediacy as EZdrummer but with a host of features that made the end result even more closer to a real drummer!

EZdrummer 2, therefore, has a wealth of new features under its sleeve, not to mention a completely new set of ‘core’ drum sounds. Importantly, for those that have assembled a large library of expansion packs for EZ Drummer, it’s worth noting that existing libraries will load themselves into the new engine, complete with updated graphics, mixer settings, and of course, the all-important MIDI grooves.

EZdrummer 2’s core library is divided between modern and vintage, with the modern kit being recorded through a Neve 88R and TG12345 consoles, while the vintage drums were tracked through a rare REDD console.

All the kits – covering selections from DW, Gretsch, Yamaha, Ludwig, Sonor, Tama and Brady – where recorded by Chuck Ainley at Mark Knopfler’s British Grove Studios. Alongside the main kit sounds, there’s also a sprinkling of percussion sounds – including shakers, tambourines and claps – which add extra flavour to the main kit.

Finding your Groove
Although we’ll return to the sound of the kits later on, arguably the most useful improvements to EZdrummer relate to the use and selection of the MIDI grooves and, latterly, the means of sequencing these loops into a complete performance. Of course, the majority of virtual drumming software (and the original EZdrummer) offers little more than a means of browsing integrated MIDI content, with the resultant song being created by dropping the MIDI loops over to a track on your DAW. Subsequent edits, therefore, require extensive editing in your DAW, often on a note-by-note basis.

As with Logic Pro X’s Drummer feature, EZdrummer 2 realises that means of sequencing the drums is as important as the sounds themselves. As a result, EZdrummer 2 includes a number of tools – from a more intuitive means of finding and selecting grooves, through to the ability to modify them on a musical level – that makes the process of drum sequencing infinitely quicker, without sacrificing your all-important creative input.

Looking first at the selection process, easily the most ingenious and revolutionary features has to be the Tap 2 Find option found under the search tab. Rather than wading through thousands of MIDI files by name, Tap 2 Find lets you suggest a basic rhythm, which EZdrummer 2 uses to find an appropriate series of ‘matches’ from its library. You suggest a rhythm by recording a short two-bar loop, either by tapping on an attached MIDI keyboard, or by clicking on the drum kit elements on the interface. Once you’ve inputted your suggestion, EZdrummer 2 finds a series of ‘best match’ loops ready for your approval.

Song Smith
Once you’ve found a basic loop, you’d expect to drag-and-drop the MIDI file over to your DAW, but in EZdrummer 2’s case, we can use its own integral song track to piece together a complete performance. Dragging the loops into the Song Creator, for example, instructs EX Drummer 2 to create a series of variations, covering Intro, Verse, Bridge, Pre Chorus and an Ending, which can then be organised onto the track lane. Alternatively, drag the various library loops onto the song track, assuming you want a more radical change between the sections of the song.

The advantage of keeping the song sequence inside EZdrummer 2 is that you get more editing options to refine the drum phrases in a quick, intuitive way. Clicking on a region in the track lane, therefore, lets you edit the MIDI performance using the kit as a visual guide, rather than having to reposition MIDI notes in a DAW’s Piano Roll editor. For example, the Power Hand lets you re-position the driving force of the pattern (usually the hi-hat) to a new part of the kit – like the ride cymbal, for example, or a floor tom. Likewise an Opening Hit assignment also lets you mark the start of the phrase, usually with something like the crash cymbal.

You can also add new additional kit elements into the phrase, as well as adjusting the density and velocity level on a drum-by-drum basis. For example, selecting one or more toms will add some tom movement, while you could tweak the Snare Amount control to add more ghost notes, and maybe lower its velocity slightly for less power on the upbeat. You can also augment the pattern with three percussion sources – clap, shaker and tambourine – again, simply by clicking on, and adjusting the relative icon and its parameter set.

When you’re finished, simply export the song as a MIDI file (or drag-and-drop it into your sequencer), or export as an audio file, assuming you’re using EZdrummer 2 in its standalone mode. 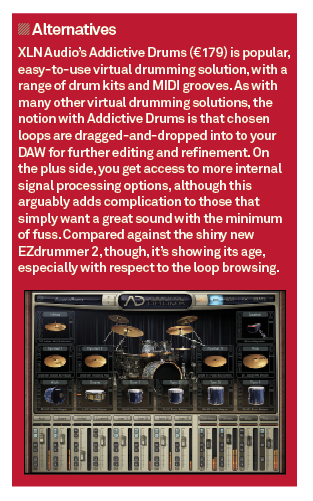 Sound of the Drums
As you’d expect, the sound of the two kits covers a suitably broad enough spectrum to make them versatile across a range of genres. The Modern Kit sounds tight and focused, but add some room ambience and the sound becomes pleasing looser. Likewise, the Vintage kit seems softer on its transients, which when combined some natural room ambience, really helps produce a natural lifelike sound. 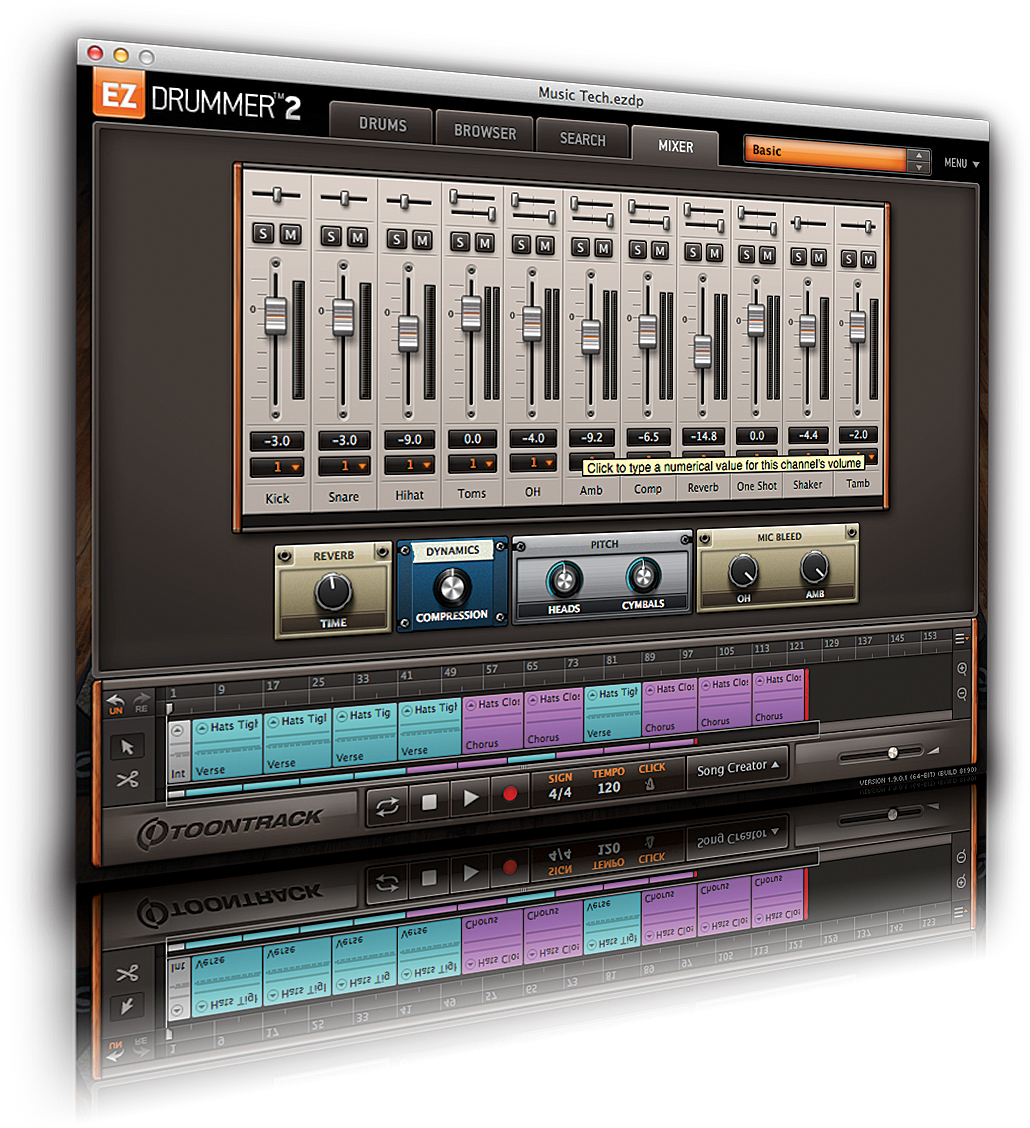 Although the mixer offers full control over the level of each kit elements, you don’t get the same level of edibility when it comes to the application of signal processing. Ultimately, EZdrummer 2 is designed as a tool with immediacy in mind, and in that respect the handy macro controls – over controls like Dynamics, Reverb Time and Mic Bleed – provide enough control without getting bogged down in detail. Should you really find the need to process sounds using you own choice of EQ and so on, there’s always the option of running the individual channels out to discrete outputs in your DAW’s mixer.

An EZ Life
With so many great sounding virtual drumming solutions, it’s interesting to see how much attention is now being diverted to the usability and musicality of the instrument as well as its sonic performance. Aspects like the Tap 2 Find feature, therefore, as well as the powerful integral sequencing features, really mark EZdrummer 2 out from the crowd, and certainly offer a host of intuitive musical possibilities that go above and beyond what we’ve come to expect from a virtual drummer. More than just an incremental update, EZ Drummer 2 defines the next generation of virtual drumming software that many will seek to emulate. 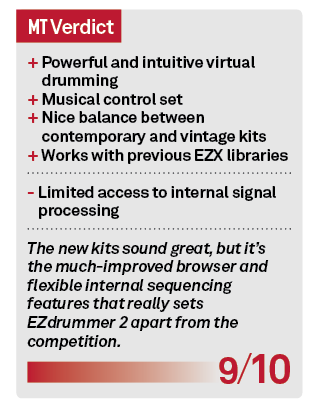 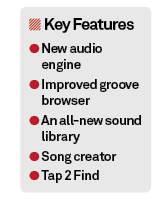