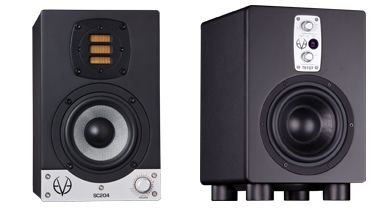 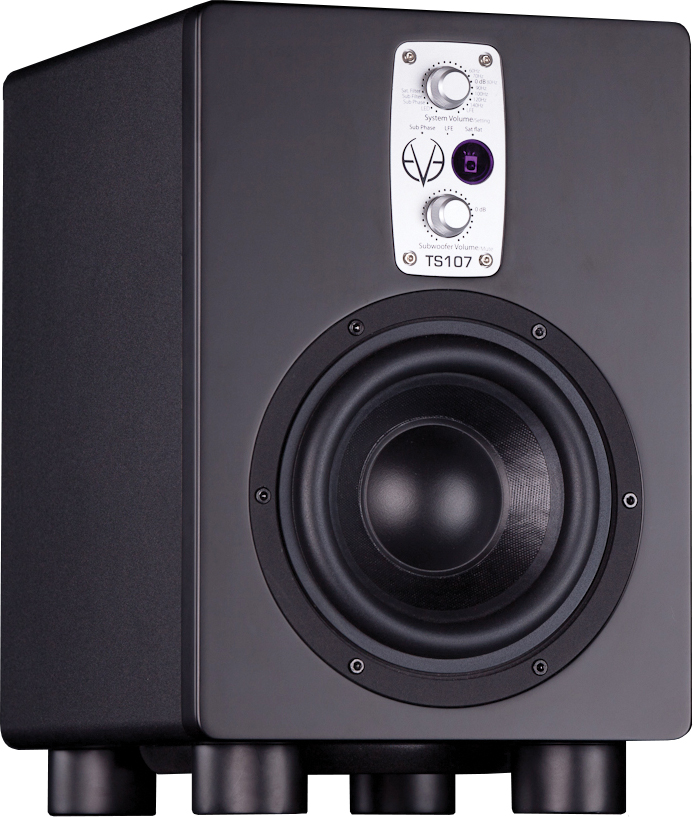 Since the SC204 is simply a smaller version of the SC205 model that we reviewed last year we won’t go into too much detail. Suffice to say that it features a 4-inch SilverCone woofer and an AMT (Air Motion Transformer) ribbon tweeter, both of which are designed and manufactured especially for EVE monitors. The woofer’s cone has a honeycomb structure with a glass fibre coating for maximum stiffness. RCA and XLR analogue inputs feed directly into Burr-Brown digital converters. The signal is processed digitally before reaching the PWM Class-D digital amps.

The front-panel knob controls volume and a host of other functions. It switches the SC204s in and out of standby mode (where it idles at 1W power consumption) and provides access to several different filter settings to adjust the response for various acoustic spaces.

You can also change the LED display intensity or switch it offcompletely if you prefer. Dipswitches on the back panel enable you to protect your settings by disabling equalisation and volume adjustment. 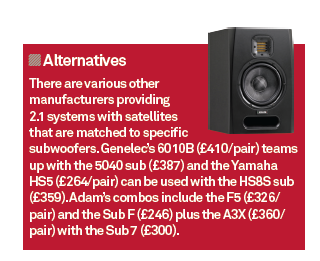 The Bottom Line
The TS107 sub is recommended for rooms up to 15 square metres and there are three bigger subs in the series to cover rooms up to 30 square metres. Rather than use a bass-reflex enclosure, EVE Audio has chosen a passive radiator design to avoid hum. The radiator is located on the underside of the cabinet and the active driver is a 6.5-inch woofer. Maximum short-term power is 100W and there’s onboard limiter protection. The TS107 also ships with a simple but very effective remote control.

Setting up the TS107 is fairly intuitive: simply connect the output of your soundcard, mixer or desktop controller to R In/L In, then connect the satellite speakers’ inputs to the R Out and L Out of the sub. There are also LFE in/out sockets and all connections are made using XLRs. Input level can be set at +7dBu and +22dBu and the LED ring blinks if the converter overloads.

The front of the sub has two rotary controls. They’re much like the SC204 controls and perform many of the same functions. The lower knob controls the sub volume and the upper knob sets the overall system volume. Pressing the Pure Satellite button mutes the subwoofer and the sub’s phase can be flipped using the remote. The entire system can also be muted and switched to standby mode.

To help the sub and satellites integrate, Sub Filter sets the upper frequency of the sub from 60Hz to 140Hz. The recommended setting is 80Hz, and in LFE mode the cutoff frequency is 300Hz. The Sat Filter removes content below 80Hz from the satellite feed to avoid issues with overlapping frequencies.

Sounds Right
This whole system sounds absolutely wide-open. The detail resolution is first-class and the TS107 integrates so seamlessly and unobtrusively that this reviewer frequently felt compelled to place his fingers against its cone to check it was actually doing something.

When the remote’s Pure Satellite button was pressed, rather than radically altering our test tracks it just felt like the bottom octave had dropped out. This also revealed how impressively big and full-sounding the SC204 is for such a small speaker. Even so, if you require a midrange response that really thrusts guitar and vocal details forward, the SC204s may not be to your taste.

If you haven’t listened to monitors with folded ribbon tweeters before, the treble response may surprise you. The SC204s are bright, but they’re not in the least bit edgy and the overall character is smooth and refined. This a superb-sounding, full-frequency system with user-friendly features that’s particularly well suited to smaller rooms. 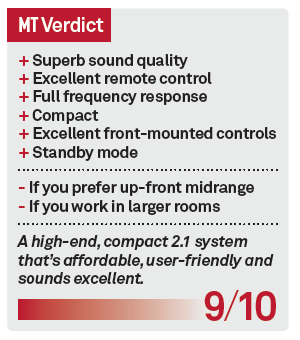