The latest offering from Erica Synth adds Wavetable to its ever-expanding ‘Black’ collection of modules. Dave Gale finds out what happens when wavetable meets VCO… Details Manufacturer Erica Synth Price £269 (street price) Contact Erica Synths anastasija@ericasynths.lv Web www.ericasynths.lv In my often misguided youth, I would sit and ponder many things. But the single most curious […] 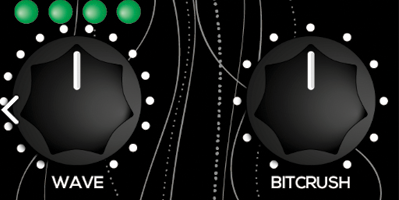 The latest offering from Erica Synth adds Wavetable to its ever-expanding ‘Black’ collection of modules. Dave Gale finds out what happens when wavetable meets VCO…

In my often misguided youth, I would sit and ponder many things. But the single most curious point that had me scratching my head for years (at least until I turned professional and had access to more toys), was: “How did Thomas Dolby create that killer sound on Windpower?”

The answer, seemingly, lies with the German company PPG. In the late-70s, Wolfgang Palm started to develop his radical idea of offering a whole host of waveforms in an oscillator, rather than the mere few found in more conventional analogue subtractive synthesis. These developments led to the appearance of the Wave series, produced by PPG, which offered a bewildering array of harmonic-rich waveforms, which had a certain beauty all of their own. There were many fans, apart from the aforementioned Mr Dolby.

Add to this the notion that if the waves were arranged in a certain order, you could morph from one wave to another as additional harmonic content was added, and you have the foundation for something sonically unearthly and rather beautiful. 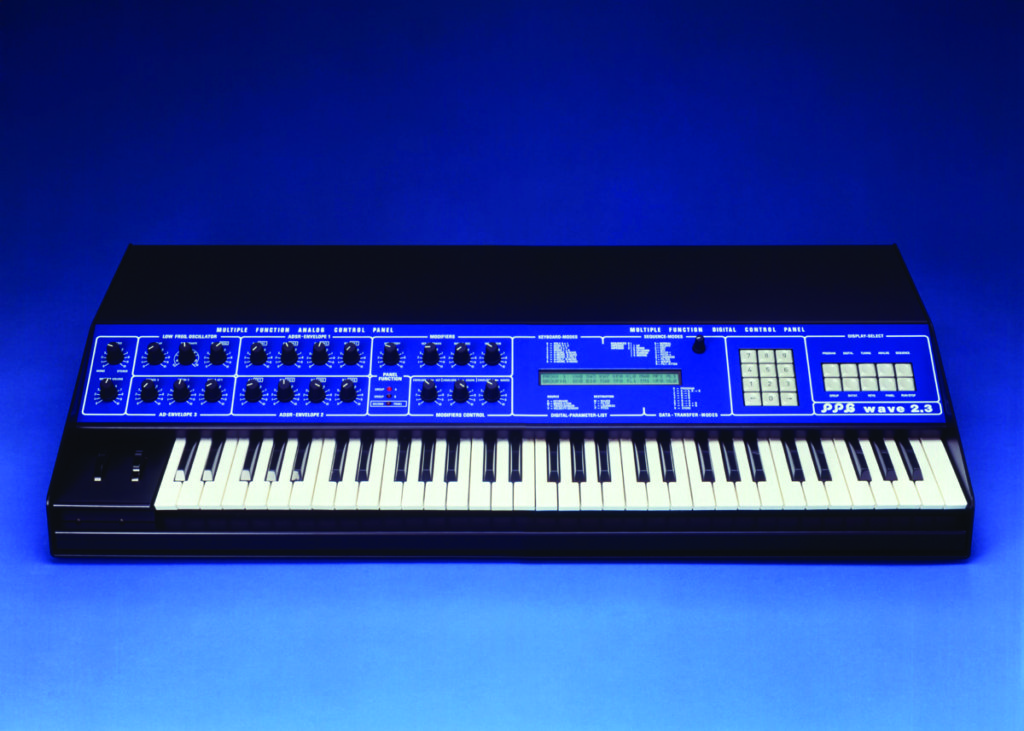 The machine that started the wavetable revolution. The classic Wave from PPG

Let’s start with the basics. There are four small and one very large Moog- style knobs on the front of this module, which entice the user to noodle. That large pot refers to Frequency (pitch) and is accompanied by a small flick switch, which moves between coarse and fine tuning. The next two pots down the line control Wave selection and Bitcrush amount, and CV controls for each are located just below each of the relevant parameters.

In sonic contrast, this module has two elements; the Wavetable oscillator, boasting 16 banks of 16 wavetables, followed by the Sub oscillator, which offers three flavours of sub. You can echo the main Wavetable output, either one or two octaves lower, or you can select a VCO, which is drawn from one of Erica’s sister modules, the Varishape VCO. This is a nice touch, and can add a basic fundamental quality to your chosen wave; and thanks to the dedicated Sub Output, can be mixed in to your desired texture without getting in the way. It is a shame that there’s no summed output on the module itself, but ultimately, this does offer greater control for external mixing.

The Wavetable section is organised via a Bank Select button, which scrolls through the available 16 banks, while the dedicated Wave pot will scroll through the 16 waves in each bank. Now here I have to say that while on paper, the architecture is 16×16, the waves are ordered in such a way that morphing occurs as you move between them, so the lines are somewhat blurred as one wave ends and the next begins: but this is a wholly positive point, as it also means that not only can you sweep seamlessly through the waves, but you can also place this under CV control. This is important, as even PPG had issues with morphing – stepping would occur as the user moved between wavetables.

The overall effect is stunning. Once powered up, my schoolboy excitement had me pulling up banks, sweeping through waves and smiling endlessly at the bewildering array of sonic soundbites. The wavetables are nicely organised and logical, with each bank offering a specific sound set by association; analogue-style waves, formant-based, acid-style sounds, vowel-based, etc.

This makes enormous sense, so you can almost guess what the next wavetable element might be, as you turn the dial and it creeps in. My next port of call was to hook up an LFO to the Wave CV, and allow the morphing to sweep automatically. There was plenty of CV headroom here, with the Waves seemingly beginning and ending with a little too much lag.

But thanks to the dedicated Wave CV pot, attenuation could be applied to bring this under control, right on the module. It is even possible to change the settings on the module so that Banks can be controlled over CV, via the configurable CV input (see boxout). Moving on to the Bitcrush option, this is a masterstroke.

Wavetable lends itself so well to being bitcrushed, as the crisp clarity and architecture breaks down to give more sonic highlights, and it doesn’t disappoint. There is a ‘bite’ point
where this starts to kick in, but this is more by the nature of the bitcrushing beast.

The Wavetable VCO is equipped with an assignable CV In, which, by default, is set to control Bitcrush amount. With a bit of noodling, this default can be changed to control wavetable bank, VCA amount or even an FM mode.

Which of these is most useful to the user is entirely open to debate, but the good news is that once you have formed an opinion, the default can be changed and stay changed from one power up to the next. The included instructions that accompany the module will give you all the clues that you need to make this change happen, but needless to say, it’s all down to a series of commands which start by holding down the singular Bank button on the module. 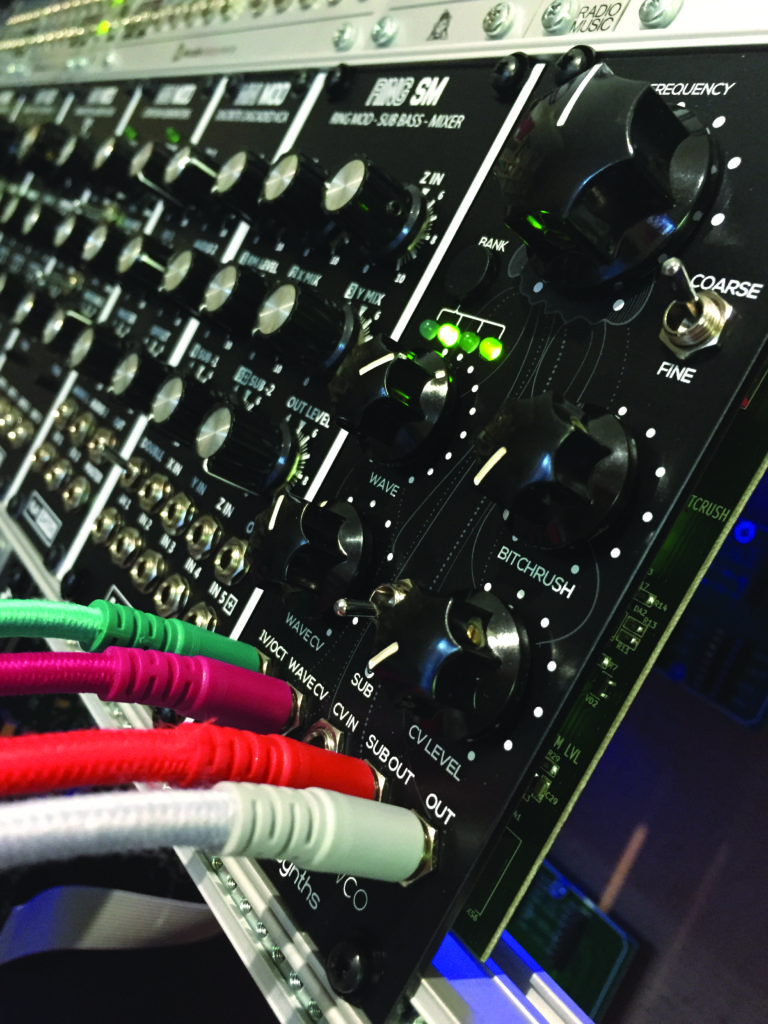 All patched up, with dedicated main and sub outs, and CV control of waves

If you are into that wavetable sound, then this should be very high on your list to try out. It’s a very versatile module with much to offer, but is ultimately a wavetable module, which can also sound like more analogue devices if desired.

The Bitcrush facility further enhaInces its usability, with a sonic palette which is particularly fashionable right now, so even though it’s based on a technology first designed in the late-70s, it sounds like the future, and isn’t that what we want in all of our synth modules?

One highly popular module for wavetable is the Piston Honda, from Harvestman, now in its Mk2 revision. This is something of a Marmite module, which is never unusual in the world of Eurorack; however, there are other contenders and reasonably new kids on the block.

The Studio Electronics Grainy Clampit is an excellent-sounding module, but requires a large degree of effort to get the best from, and then of course there is the Waldorf nw1. Sonically, the nw1 is excellent, but there have been huge reliability and calibration issues with this module, which is a great shame. It’s also worth noting that neither the Grainy Clampit nor the nw1 offer smooth morphing between wavetables, which sets the Piston Honda Mk2 and the Wavetable VCO in a class of their own.

I have to say that I had a feeling I would love this module, and love it I do. There is a wealth of content available, with more on offer in ROM form from Erica Synth. But the real steal for me is the welcome ability to morph seamlessly from one wavetable to another. It’s gorgeous, but it’s no Mr Nice Guy, and can happily sound gnarly and gritty when required. 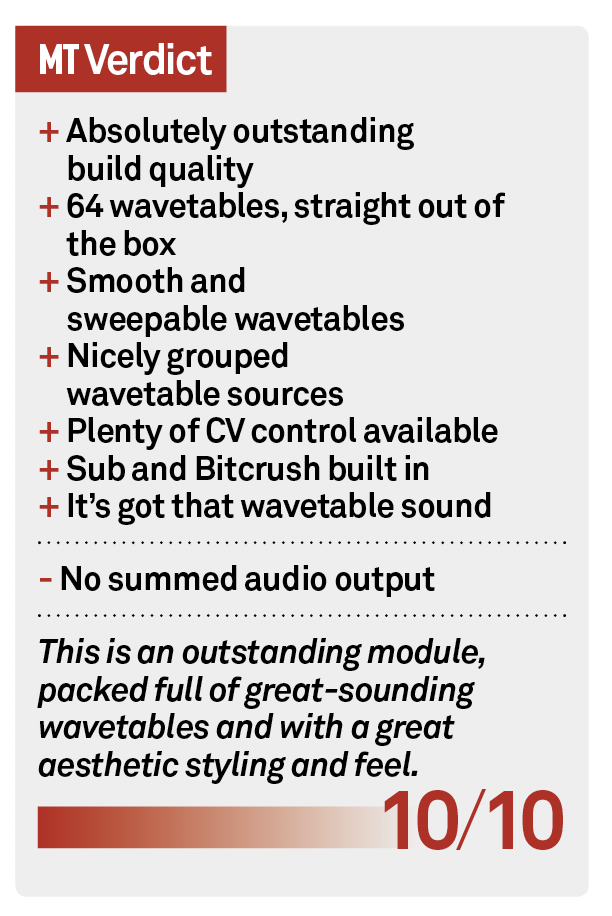