When a company’s products appear in the studios of artists such as Trent Reznor and Richie Hawtin, you get the impression that it must be doing something right. However, it wasn’t until recently that we got our hands on the Octatrack, which was our first experience of Elektron’s products. Fortunately, it was a good one.  […] 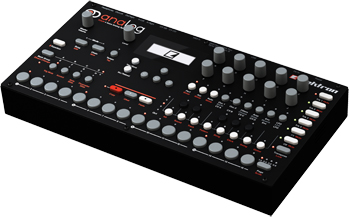 When a company’s products appear in the studios of artists such as Trent Reznor and Richie Hawtin, you get the impression that it must be doing something right. However, it wasn’t until recently that we got our hands on the Octatrack, which was our first experience of Elektron’s products. Fortunately, it was a good one. 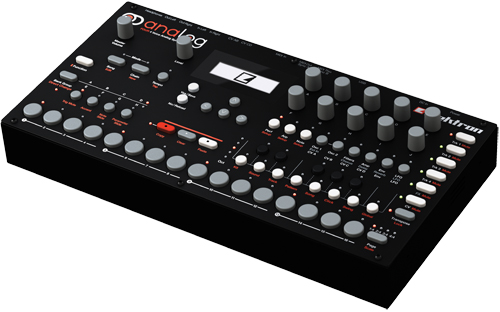 Whereas the Octatrack is sample-based, the Analog Four is, as its name implies, analogue-based. With a four-voice analogue heart, we are curious to find out how this company’s venture into the analogue realm fares.

The first thing that sticks out in respect to the layout of the Analog Four is that it doesn’t have the immediacy of a classic analogue synth. Most analogue synths will have a one-knob-per-function layout that makes it easy to visually learn your way around its architecture. Even a lot of modern, digitally controlled analogue synths with multi-function controls will still have sections dedicated to envelopes, oscillators, LFOs and so on. Initially, then, it feels strange to be combining analogue with the many multi-function buttons and graphical display that Elektron has employed. Indeed, we actually had to sit with the manual for quite a while before we figured out many of the unit’s features – the Analog Four isn’t something you’ll feel in control of straight away.

Each of the four voices in AF consist of two main, two sub and a single noise oscillator. These pass through a 4-pole low-pass filter,  analogue drive and onto a 2-pole multimode filter. We found the drive quite nice for adding fuzz to the edges of the first filter, or for creating more frequency information for the second filter.

The only digital source here is the noise generator; in terms of processing, the three send effects (chorus, reverb and delay) are also digital. The oscillators stay in the analogue domain while the digital effects run in parallel.

Outside the analogue domain are all sorts of digital controls for envelopes, LFOs and oscillator pitch. Each voice has two LFOs and two additional envelopes making three, alongside a dedicated amplitude control. Other dedicated modulators such as vibrato and LFO fade options are also included.

Parameter settings can be sequenced with or without an actual note triggering the oscillators. Adjustments to filters, effects and oscillator settings can be made over time, allowing for creative tonal changes. We used this technique to take simple melodic ideas and stamp various different timbre changes within the pattern. For instance, we could apply the super-wide-sounding chorus to one hit, a blast of reverb send to the next, and alter the oscillator’s parameters for the third note and so on. It’s easy to spend hours exploring these features.

Inputting notes for a pattern is a simple affair – either step-input them or perform in real time. A small keyboard is included in button form, but you can trigger notes using an external source via MIDI. AF has both USB and 5-pin MIDI I/O that can receive notes and fire out sync information.

Although there are CV outs at the rear that can be used to sequence external gear, AF doesn’t allow you to program patterns for MIDI. This prevents the unit from being an all-round sequencer, but it remains a good analogue hub. Sequencing MIDI devices would involve another device and setting up sync over MIDI. 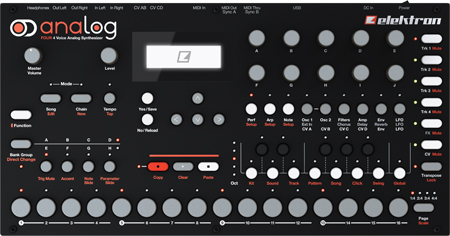 After a few hours of play, our initial confusion as regards some of the operational aspects reduced to the point where we could think about putting ideas together rather than head-scratching. In this respect, the file management is interesting: your four sounds for each track, CV and FX settings can be saved within a kit. The kit is then linked to a pattern. Chains enable you to  piece together patterns, which is useful for jamming ideas quickly, but they can’t then be saved into a song. For convenience’s sake, though, Elektron does allow you to add raw patterns to a song, which brings extra flexiblity to your workflow. There’s even a handy scratch pad, although it isn’t saved with a song; instead, it allows you to explore possible arrangements of patterns or chains before you commit to anything.

If creative and experimental analogue sound design and composition is your thing, the Elektron Analog Four is certainly an interesting and enticing proposition.

+ Lots of creative control for studio or live use

– Difficult manual to read, and takes a good while to learn

With a deep analogue tone and more than its fair share of programming potential, this is a highly creative unit.