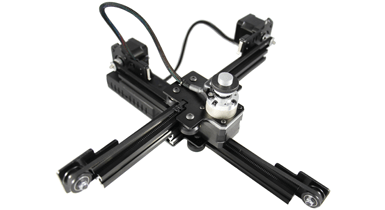 With DynaMount’s pioneering robotic microphone positioning, our gear now responds intelligently to our commands. Matthew Mann is in position… 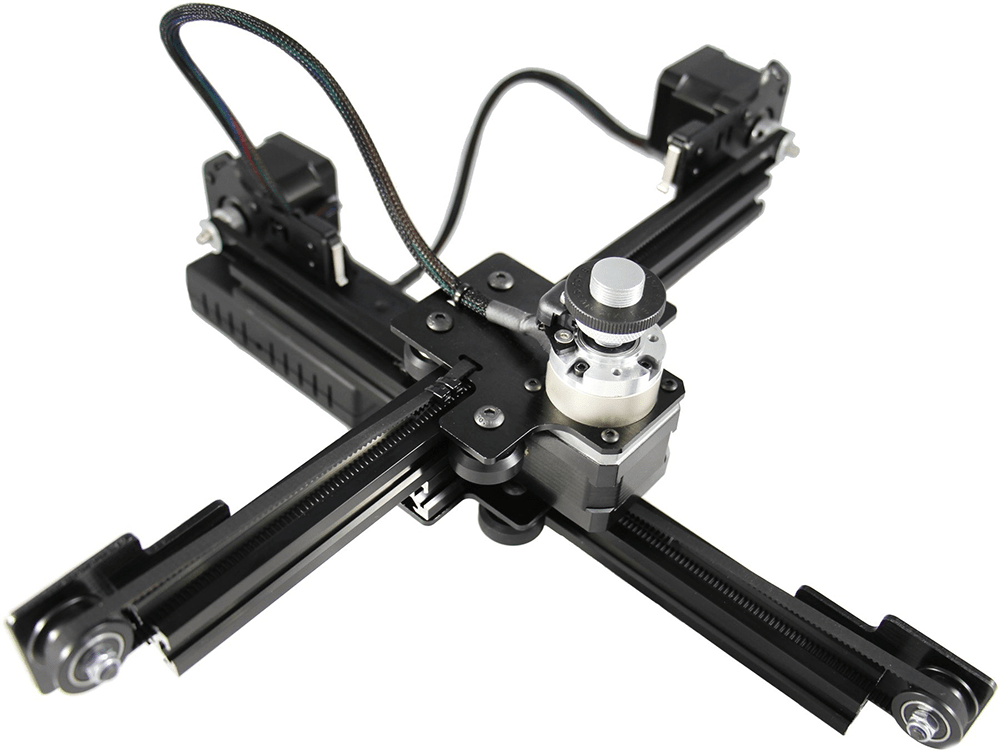 Studio life is replete with daily challenges that can turn even the most hardened engineer grey. Finding the right mic for a young diva’s lead vocal, pampering a guitarist’s bruised ego when he can’t quite nail the last bar of his solo, having to make a custom cable on-the-fly so the keboardist’s homemade synth can be patched in for recording… these are all challenges that can greatly disrupt the flow of a recording session.

And if the engineer doesn’t have the luxury of an assistant, the last thing they want to do is run back and forth between the control room and live room moving a microphone three quarters of an inch to nail that perfect tone before the guitarist forgets the part. With that in mind, Jon and Mike Russo at DynaMount have come to the rescue by developing a line of robotic assistant engineers to help out. They call them Remote Microphone Positioners (RMPs) and they are a huge time-saver in the studio. 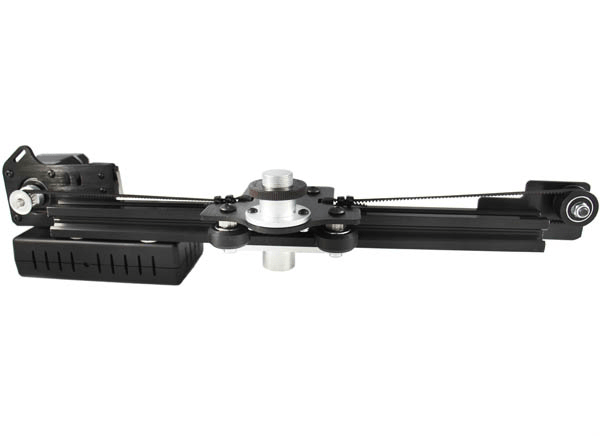 This one is the smallest member of the DynaMount family. It features a single-axis pathway allowing an engineer to move any microphone left and right (or up and down/in and out, depending on mounting). This is perfect for quickly moving the mic from one spot to another and adjusting to taste. The DynaMount website suggests that it could be used to quickly change microphone positions for different songs, or for changing phase alignment on a kick drum. The free DynaMount app even stores different settings as presets. More on that later. 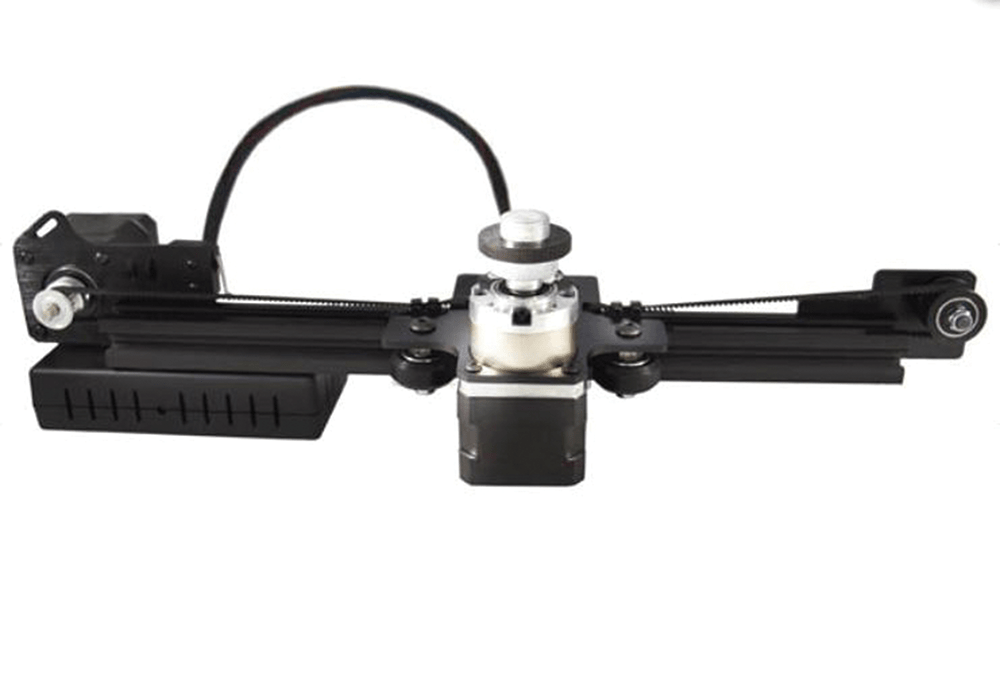 This is the same as the V1 above, with one notable addition – a 360-degree rotating swivel. This allows the engineer to rotate the mic into numerous off-axis positions. Storing positions as presets allows you to do serious A/B comparisons without forgetting where that perfect tone spot was.

For producers who want to remotely control tone, but also want to control phase alignment at the same time… especially if you’re using more than one microphone on the same source (guitar and bass amps, bass drum, acoustic guitar, etc).

This is the ‘big daddy’ of the DynaMount line. Not only are you provided with dual-axis control of tone and phase alignment, you get the rotating microphone head mount for additional on/off-axis tone control. This bad boy is a recording/live sound engineer’s dream. During this review, I’ll be talking about the X1-R, because it’s the one I received. Some features will be common among the DynaMount product line; some will be exclusive to the X1-R.

This one is meant for broadcasters. It will enable them to capture the perfect sound in live events (sporting events and more) and change the sound dynamically as the action changes.

The X1-R arrived well packed in a custom-cut foam cradle. The box contained the X1-R, the power supply with a 2.5 meter (8ft) cord, and a long Micro-B type USB cable. DynaMount was also kind enough to throw in the Accessory Pack (optional) which includes an On-Stage Posi-Lok Clutch for mounting the X1-R on an incline or even completely vertical; a Latch Lake 5/8”-27 Thread Extender for extending the clearance of the mic and cable; a Latch Lake Oversize Jam Nut for locking the DynaMount or microphone on the mic stand exactly where you put it, and a LyxPro right-angle XLR cable for mics that have the cable jack on the bottom. I’d recommend getting the Accessory Pack regardless of which option you go for, as these pieces greatly extend its capabilities.

Connecting the RMP to the microphone stand was easy. They attach to standard microphone stands, so no proprietary stand is needed. Caution: the motors for the mechanism are a little heavy (especially on the X1-R), so make sure you put it on a sturdy stand. I knocked this one over almost as soon as I mounted it. Fortunately, there was no harm done… but I immediately transferred it to a sturdier stand with a larger tripod base.

The DynaMount app is available on the App Store, Mac App Store, Google Play and for Windows (downloadable from the company’s website). It works on Mac/Windows PCs, tablets, and mobile phones. Installation of the app is quick and painless: the DynaMount website has step-by-step instructions and several tutorial videos, so you shouldn’t be able to stray too far off the path in setting it up. Connecting the power supply, I was really impressed with the length of the included power lead.

Measuring in at 2.5 metres (8ft), this thing was made with real-world use in mind. It’s long enough that you can plug it in without necessarily needing an extension lead – to me, this screams forethought. Now just follow the steps on the website to get the app and the RMP talking to each other. The RMP calibrates itself each time it’s powered up. Once it’s finished, you know you can control your unit.

The app is simple and intuitive. When everything is connected and calibrated, you’re presented with the main control screen. This screen shows a graphic of a speaker (so you know where your device is placed). There are white and blue arrows, which denote the directions you can move your device.

In the case of the X1-R, you are presented with options for moving forward (toward the speaker) and back, left and right (starting from the centre of the cone and moving toward the outside), and rotating from left to right (to get that off-axis sound you might be after). You can connect loads of devices (10) and the app is smart enough to adjust itself to only present options if your device has them.

There are also arrows below and on either side of the direction buttons for rotating the mic (in the case of the ‘R’ models). Additionally, there are computer-keyboard hotkeys tied to the arrows in the app, which will allow you to control the same functions, so you never even have to look at the screen while moving the mic around. This lets you really focus on the sound.

In the top-right corner of the app is a gear icon. This is the options menu, which lets you customise your DynaMount experience. If you want to mount the device in the inverted position, the options menu will allow you to change the functions to accommodate that. Want to face the mic toward you? The options menu lets you adjust the controls in the app to enable that, too.

It will even let you choose the desktop image you see from one of three speaker images and change the size of the speaker to reflect the situation. Just below the Options icon is an indicator light. This illuminates red when the device is moving and green when it stops. 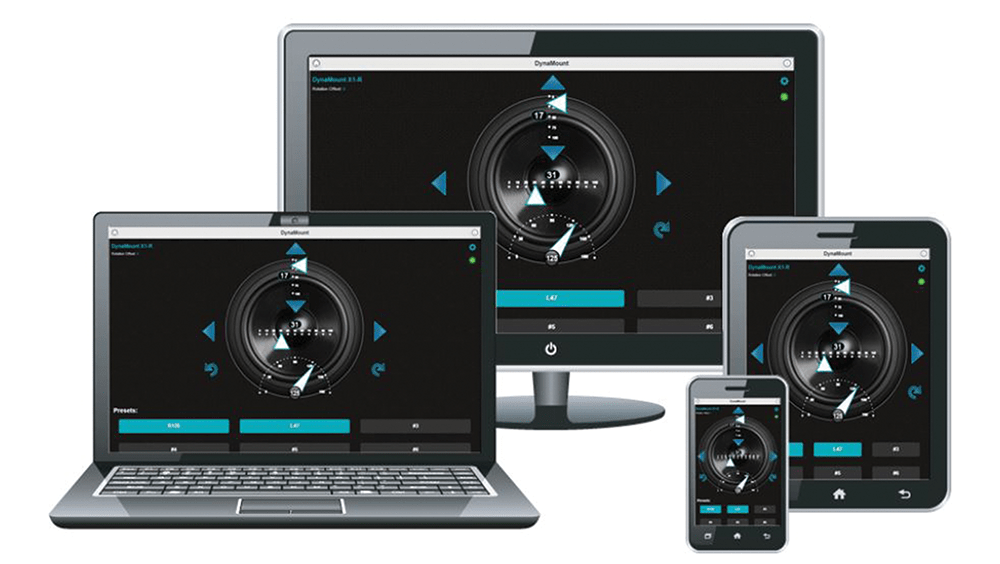 Although Remote Microphone Positioners aren’t for everyone, recording and live sound engineers who work on their own or need an extra hand moving mics in the heat of a gig will find the DynaMount line invaluable. They are perfect tools for the studio – and their robust build quality means they should be fine with the rigours of the road. It’s a good idea to keep the die-cut foam for storage when not in use.

Preset it and forget it

At the bottom of the screen is where the real magic happens. There are six presets you can use to store your favourite positions. Maybe you’d like to move the mic out toward the edge of the cone and then angle it 15 degrees off-axis, then, nudge it a little more to get just the right tone, now store it as a preset… Experiment with different placements and, when you find another placement you think you like, store this one, too.

This makes it very easy to A/B your mic positions. Not only that, but say you want different tones for the verse and chorus of the song you’re recording, with the touch of a button, the presets enable you to move from one stored position to another without ever having to guess where you had the mic to begin with.

Let’s take that concept one step further. Let’s say you have two DynaMount devices placed in front of your favourite guitar amp and you want to store both devices’ placements together for instant recall. You can do this with Multi-Device Presets. This is such a cool feature that I wished I had another DynaMount, just so I could try this out myself. Multiple mics on a singer-guitarist would be a breeze with this kind of setup. And if six presets aren’t enough, the app gives you the ability to store Sessions as well (see boxout).

The DynaMount devices are very clever time-savers that will make your studio life much easier and more efficient. Not only can they be used for the obvious (guitar cabinets), but also for drum overhead placement, placing over piano strings, in front of a kick drum, and more.

The DynaMount app is extremely cool and has the features most engineers would want in a device like this. Although it’s probably overkill, it would be a bonus if there were more presets slots or more sessions for saving presets. This is certainly not a complaint; I assume this limit was set so as not to bog down your smart device’s already limited storage.

DynaMount’s support for so many different types of devices offers a lot of flexibility in the studio. Also, I’ve been told that DynaMount is currently working with a particular stand builder (Latch Lake) to develop the perfect stand for this line.

Finally, I think it’s important to stress again that the beauty of these mic mounts and their associated app is that they lend themselves to experimentation. Close your eyes, listen, use the Blind Test function, experiment and your new robot pals can help you get the sound you’re after before you ever even hit Record.