Though the world of professional DJ’ing is facing heavy strain right now with the closure of clubs, this latest, feature-packed CDJ aims be the centre of the party for the next decade. 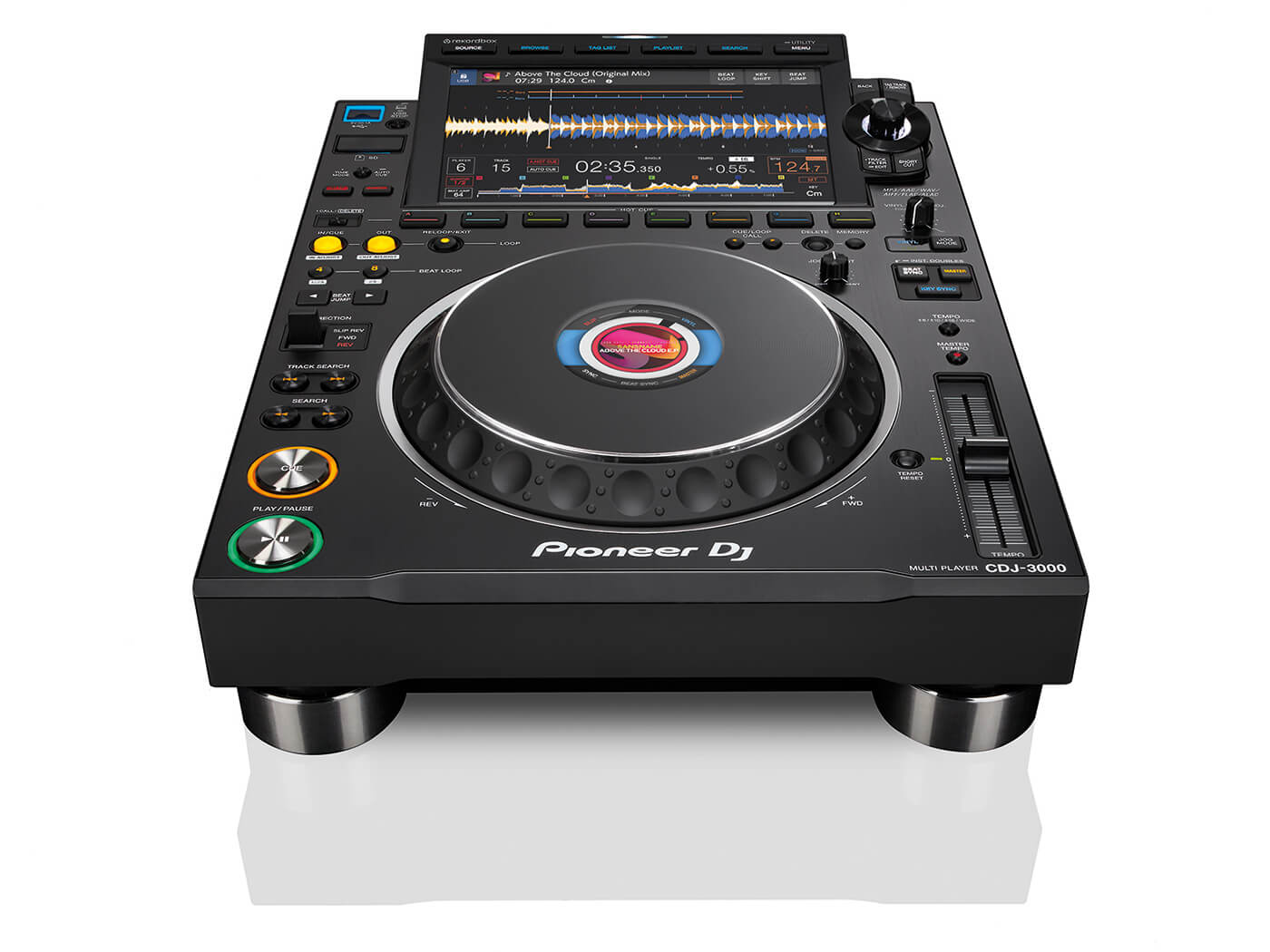 When Pioneer DJ launched the original CDJ-1000 it was a huge leap for DJs and helped the company to elbow out Technics from the DJ booth after its Technics brand of CD player failed to hit the mark. Steady updates followed until another huge leap forward came with the CDJ-2000 at the end of 2009. With the a brand new flagship CDJ, are we facing an evolution or a revolution?

It’s always going to be a careful balance when you’re dealing with updating a product that has become the industry standard for most DJs and clubs across the world. DJs want the familiarity and workflow they’ve become accustomed to but also, with Denon nipping at Pioneer’s heels with some groundbreaking features and engineering, Pioneer needs to keep an eye on tomorrow, and the types of features that modern DJs expect.

A notable omission, despite keeping the CDJ branding, is that the actual CD drive has been removed, something that I’m sure very few people will miss, but it is surprising that with the moving parts and this mechanism cost being removed, the price point shows now signs of diminishing on the CDJ-3000. Pioneer insists this has been invested in other areas of the unit, and there are quite a few meaty additions here which indicate that is the case. 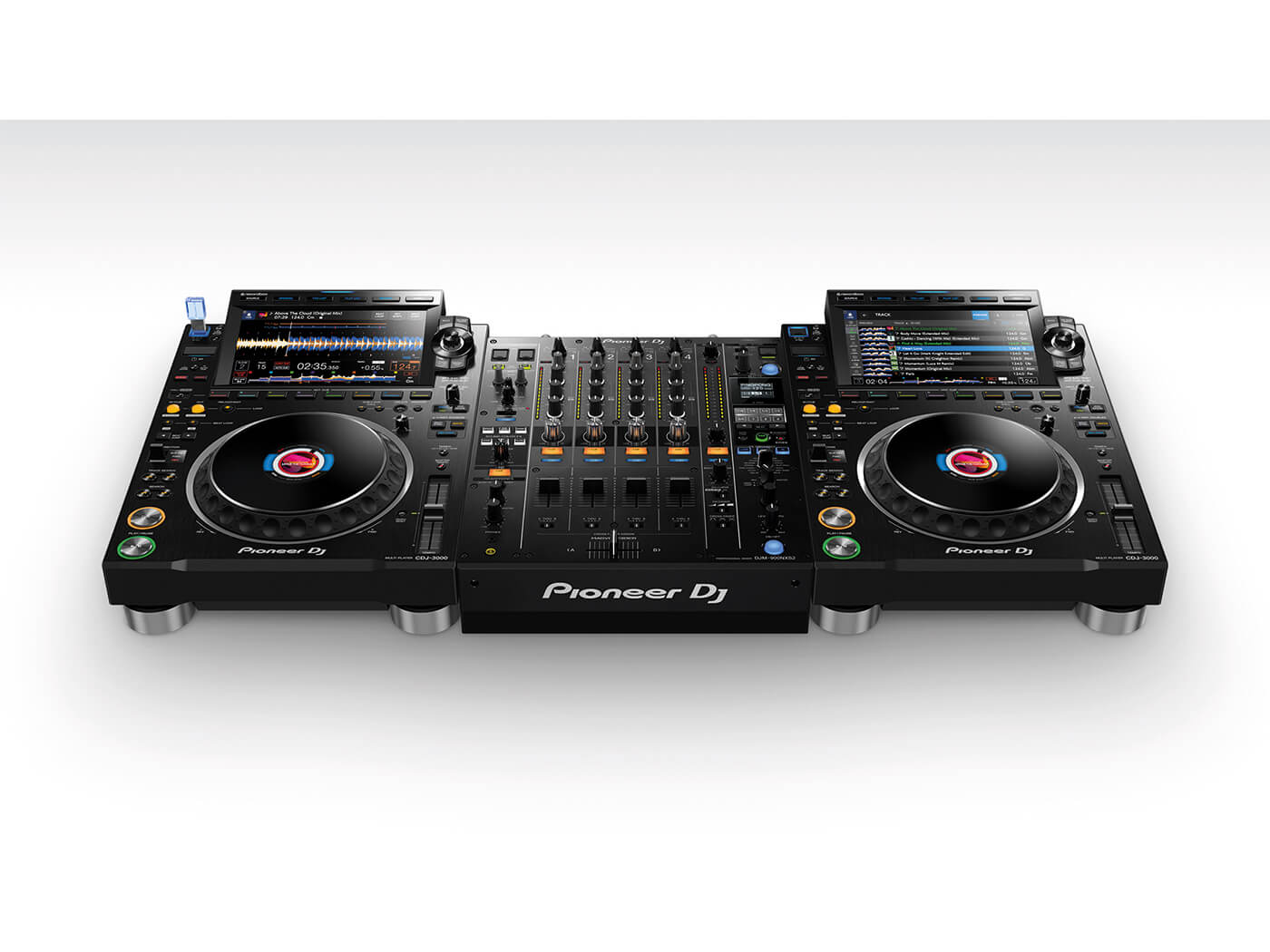 Essentially, what we are dealing with is a computer and high spec DAC, wrapped in a fancy controller, coupled with a brand new micro-processing unit that has led to swift audio processing, faster loading times and overall much snappier operation. The digital audio converter is the same as on the Nexus 2 range, but the DAC now up-converts all playable audio formats to 96kHz/32bit and internally processes audio with 32bit float. There’s also been a renewed focus on the internal components for the audio circuit.

Resistance components that are used for audio have been switched from metal oxide resistance to metal film resistance which Pioneer DJ claim provide much better sound quality. In addition, to that, work has been undertaken to eliminate digital noise from Power Supplies, ICs, LCDs & LEDs and create a much less fatiguing and clearer sound at high volume. Putting this to the test right now proves difficult because of the current closure of clubs, but there’s no doubt that these sound absolutely fantastic on our home setup, but whether they sound better than the previous models is a tough call at lower volume levels.

This attention to the physical components is where much of the real upgrading has been done, and possibly part of the reason why it could be a tough sell for Pioneer DJ to the consumer, as these tweaks for the install and club market might not be of as much importance to the average home DJ.

The Play/Pause and Cue buttons are the most robust version that Pioneer DJ has ever made, with the bold assertion that they hold up even after one-million pushes. If you’ve ever DJ’ed with a deck that has a dodgy Cue and Play button, you’ll know how important that is. The list of small but important improvements continue throughout the device, with even the kettle lead for the power now being a locking IEC connector, so no worries about power leads getting pulled out.

The build quality is first-rate, with a metal edge-to-edge top plate that feels much more solid. It was also immediately obvious the jog wheel rotation, latency and feel has been hugely improved too. Pioneer DJ say that the jogs have less moving parts to them than previous models and they definitely feel extra robust and better for scratching with the lower latency. The addition of an improved central screen, to display artwork and information about active settings on the jog wheel is also a beneficial update.

The overall physical size is a little deeper and touch wider. But, this is mainly due to the upgraded large 9-inch touchscreen and the extra room required for additional Hot Cues and some extra loop and beat jump functionality. 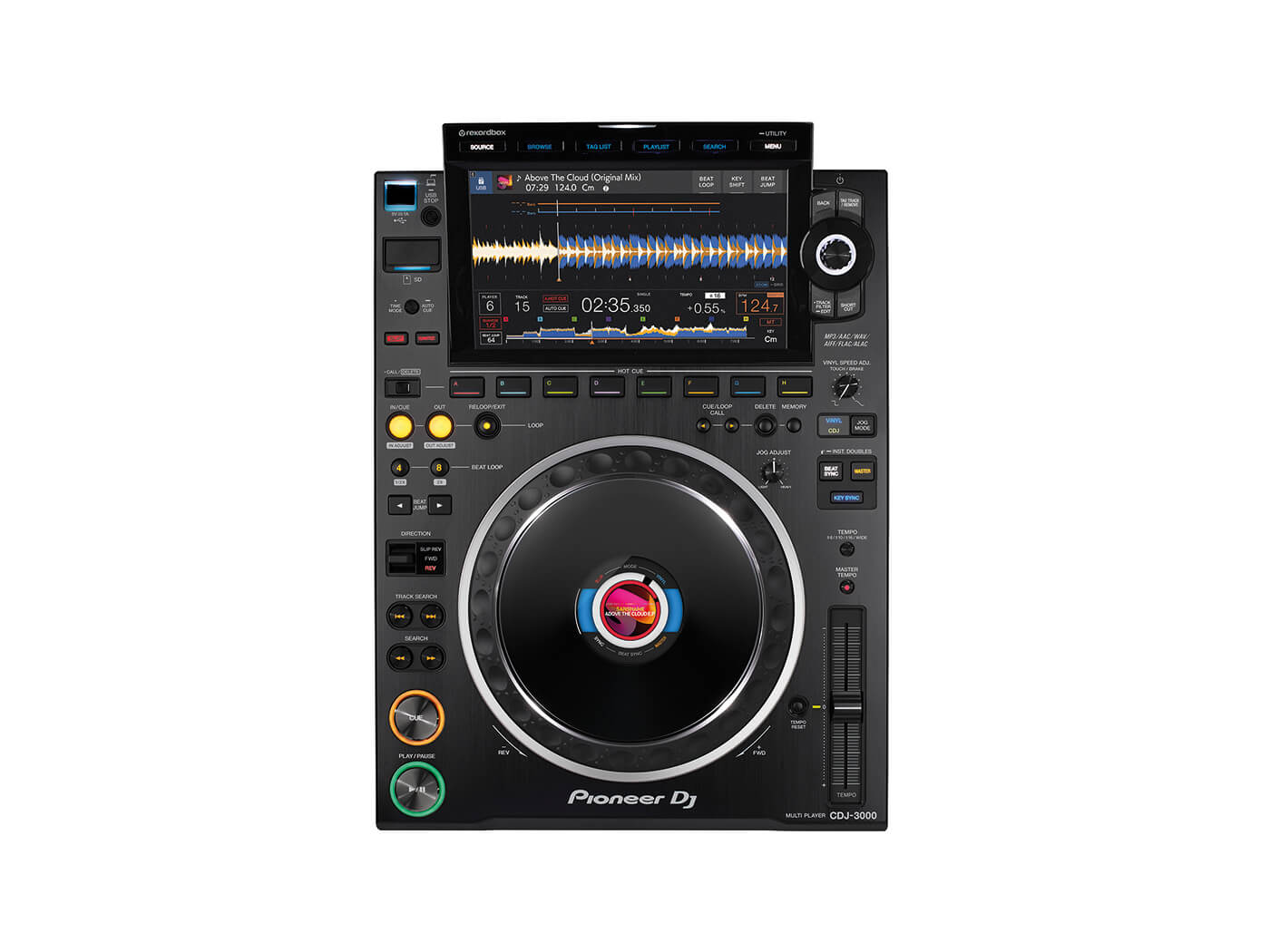 Although the touchscreen isn’t multi-touch, it works really well and the extra size makes light work of browsing large collections and searching for tracks. Seeing where Hot Cues are, and the track’s overall large wave display is fantastic and the experience of the screen feels like that of using a tablet or laptop to browse.

Plus, if you’ve paired up these with the DJM-900NXS2 or the new V10 mixer, you’ll be able to use the LINK cue function to touch the preview waveforms of tracks in the browser and hear them in your headphones even while a track is playing out from the same deck you are previewing on. You can also preview different sections of the actual track that is playing too by touching the lower waveform – all at full quality. This makes handovers, mid-set preparation and track selection such a breeze. It’s a fantastic feature. Adding to this LINK functionality are multiple options to be able to view the waveform of the master deck on the top of the screen on the player you are about to mix in.

Key shift and general key mixing features have also greatly improved. If your tracks are key analysed then the key will be displayed below the tempo on the screen. Turn off master tempo and you’ll see key changes occurring as you pitch up and down using the tempo fader. You can also keep the tempo and change the key by using the key shift options and transposing the tracks key that way. Not only is this great for the obvious key mixing, you can actually get some wild effects by jumping quite a few keys if you’re live remixing. When you just want key match automatically, Pioneer DJ has improved this also. Auto-key match now recognises many more complimentary keys – so huge ‘chipmunk’ transpositions are no longer a worry. There should always be a complimentary key within a couple of semitones. 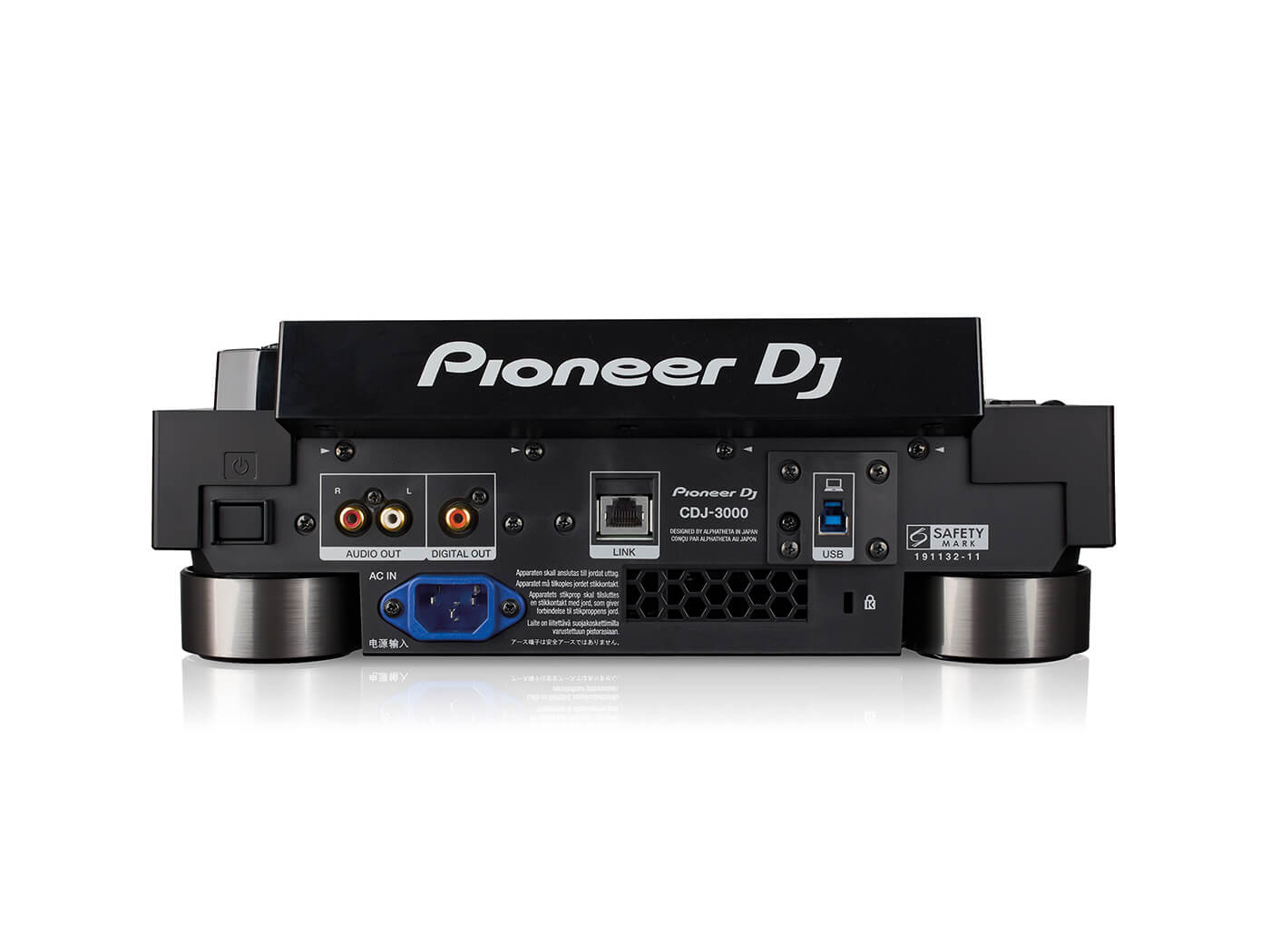 God is a CDJ

Not everyone DJs in the same way and it’s clear Pioneer has had to balance a multitude of opinions and options here, though there is genuine innovation under the hood, and it’s difficult to fault any of the update’s changes. The 3000 design seems to be looking at what the most-used features were on the previous models and letting DJs access those features faster. There is fast tagging and playlist creation using tagging, but overall it’s still not a great experience to prep on the decks themselves, with Rekordbox software still critical for proper preparation. In fact, bizarrely there isn’t even the option to analyse tracks on the unit and although you can create a playlist from the taglist, it would be nice to create, edit and rename playlists generally.

So, to answer the earlier question on whether this represents evolution or revolution, I think it’s safe to say it is of the former camp, despite the leap by a thousand numerals. The 3000s are in need of a firmware update to incorporate streaming services, on-deck preparation, analysis and some other gaps in the feature set. The focus here has been on getting the foundations right for a futureproof product that can be robust and reliable with heavy use at pro-level events.

In all likelihood, these additional firmware updates will arrive and the 3000 will be used as the hardware staple for many years. When the world eventually eases back to normality you’ll see these in major clubs and on tech riders everywhere, but with strong competition from Denon, innovating and squeezing the prices down, Pioneer DJ can’t get too complacent.

If you’ve got deep enough pockets then these will not disappoint you. They are a flagship product and will no doubt be the staple of DJ booths for years to come. The CDJ-3000 is a pro level install product and much of the expense has gone into making sure these will not fail in high intensity situations and sound fantastic at very high volume levels, something that will not be a requirement for most average users. We don’t see a rush to upgrade here if you’re a CDJ-2000 Nexus 2 owner, but once the firmware updates come for the CDJ-3000 we’re sure the gap in features will become even wider. Right now, the all-in-one media players such as the XDJ range offer better value overall while still giving a really close feature set.

The only true alternative on the market right now, the SC6000 is a deck growing in popularity but it is yet to be seen if this player can hold up to the rigours of years of club play. But, there’s built in streaming from TIDAL, Beatport and Soundcloud. A larger 10.1-inch touchscreen and dual layer playback allowing for two tracks to be played simultaneously.