dbx’S 676 is a feature-packed channel strip that offers incredible versatility in the studio. John Pickford takes a closer look… Details Price £949 inc. VAT Contact Sound Technology 01462 480000 Web dbxpro.com The trend in studio hardware these days seems to be for new companies creating products based upon, or inspired by, classic gear from the […] 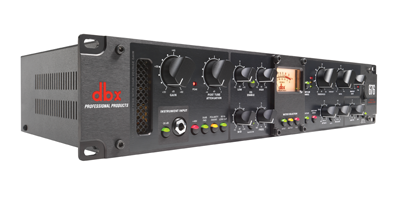 dbx’S 676 is a feature-packed channel strip that offers incredible versatility in the studio. John Pickford takes a closer look…

The trend in studio hardware these days seems to be for new companies creating products based upon, or inspired by, classic gear from the past. It’s refreshing, then, to see (and hear) a brand-new product from a well-established company that has been designed in-house, without so much as a nod to vintage audio products.

While the design may be brand new, dbx has employed some vintage technology, in the shape of the valve-driven preamp section of this fully-featured channel strip. The 676 comprises a tube (valve) microphone preamplifier, a semi-parametric equaliser, compressor and limiter in a 2U 19-inch rack-mount case.

This type of recording channel has become increasingly popular, especially among lone recordists working with a DAW, who like to inject some quality analogue warmth into their digital recordings at the input stage.

It should be pointed out that this is not a pure valve unit; only the preamp features a single valve, while the rest of the unit employs solid state technology.

An initial inspection revealed the 676 to be built to a high standard and exceptionally well laid-out, especially considering the wealth of pots and push-button switches on the front panel; there’s even room for a decent-sized VU meter.

Although the unit is not designed to copy vintage hardware, it does boast classic styling without being obviously retro. The pots – all of which are continuously variable – are sized and spaced to avoid fiddly operation, and are sculpted to feel pleasant in use.

In Use
Taking each of the channel strips’ functions in sequence, the preamp section has all the usual features – phantom power, input pad, polarity invert and high-pass filter – as well as a Hi Z instrument DI input.

The main feature of the preamp is its dual input-level controls. The first (pre-tube) Gain pot controls the amount of input gain supplied to the tube preamp; the higher the setting, the harder the valve is driven.

For the cleanest results, this attenuation control should be set to maximum with just a small amount of tube drive from the Gain pot. We experimented with these controls and found that the amount of audible tube saturation was less than expected at high-gain settings.

Other units with similar controls offer more obvious distortion effects than the 676, which never got as downright dirty as we’d hoped. We were able to hear a degree of edge introduced at full-pelt; however, the effect was subtle, and it was possible to adjust the controls quite dramatically without hearing significant changes in tone and drive.

The basic sound quality of the mic-pre is good, if slightly opaque when compared with our reference all-valve mic-preamps, but there is plenty of available gain (60dB), so it has plenty of drive to amplify insensitive mics such as our Coles 4038 ribbon mic.

The noise floor was reasonably low unless the valve was driven hard, provoking a certain amount of hiss. While the preamp is perfectly adequate, we’d advise potential users seduced by the valve saturation aspects of the 676 to audition the unit to make sure it produces the desired effects.

The equaliser is a semi-parametric design, featuring shelving EQ for the low- and high-frequency bands with fixed frequencies of 100Hz and 10kHz respectively. Both controls offer 15dB of boost and cut with a 12dB/octave slope. The mid-frequency controls operate as a peaking EQ, again with 15dB of available boost and cut.

The centre frequency of the midrange can be selected within a range of 100Hz – 8kHz, and a switch is provided to select the width (Q) of the peaking filter. This section of the channel strip was impressive. The fixed frequencies of the low and high end seem quite sensible, and in practice are effective. We were able to dial in substantial levels of boost in the right circumstances, with musically appealing results.

Boosting 10kHz on an acoustic guitar mic’d with a valve Neumann U67 sounded lovely, quite unlike the sound of equalisers found on many budget mixing consoles. It’s best not to be too liberal with EQ boosts during initial tracking, and we found that a touch of sweetening with a few dB of boost went a long way.

The mid controls are similarly powerful, and we found that scooping out some low-mids in the region of 400Hz (using the wider Q value) helped reduce muddiness from a kick drum, while the narrower Q setting allowed nasty rings and resonances to be easily identified and eliminated.

Moving on to the compressor/limiter section, things really started to get interesting. It’s a VCA design taken from dbx’s highly regarded 162SL model. The compressor features a full complement of user-adjustable controls, comprising pots for Threshold, Ratio, Attack, Release and Make-up Gain. Furthermore, there is an OverEasy button which, when engaged, alters the compressor’s response characteristic from hard to soft knee.

An Auto button is also provided, which bypasses the Attack and Release controls, allowing the compressor to automatically respond to the input signal. A button labelled Contour acts as an HPF set at around 180Hz. Engaging this control prevents the compressor from reacting to low frequencies, often the cause of unwanted pumping artefacts. A Peak LED meter is provided which, when lit, indicates that the compressor is clipping the output stage and Make-up

Gain should be reduced. Frequency-weighted compression can be performed by inserting an external unit such as an equaliser, and engaging the Sidechain button. Separate from the compressor is dbx’s proprietary PeakPlus limiter, which features a single control pot. Turning this pot fully clockwise effectively turns the limiter off, while an LED indicates that limiting is taking place.

As the compressor is capable of so many different applications, setting up can be as difficult or easy as you choose. Because the unit is capable of extremely fast response times, setting the Attack and Release times can take some getting used to; inexperienced users may well find the Auto control useful here.

Practical Tip
To record a lead vocal, engage the input meter selection button to monitor your input level. The phantom power button should be engaged if a condenser mic is being used. For the cleanest tone, set the Post Tube Attenuation control to 0 and dial in enough gain so that the VU meter reads around 0dB on the loudest parts.

For more tube saturation, increase the Post Tube Saturation and reduce Gain to maintain good input level. EQ and compression is a matter of taste. However, making use of the HPF is wise, and a touch of 10kHz top-lift may add some air. Use both the Preamp and Compressor/Limiter outputs to enable both a compressed and uncompressed signal to be recorded.

Conclusions…
Overall, we were quite impressed with the dbx 676. It certainly offers all the tone and dynamics control needed to get the best out of any signal processed through it. The compressor/limiter, in particular, is extremely comprehensive in the range of compression styles available. Everything from smooth, transparent soft knee (OverEasy) compression right through to hard limiting is available.

The equaliser, too, is impressive, offering musical enhancement in the upper and lower registers – the 10kHz boost is particularly sweet – via the shelving filters, while the sweepable midrange control can usefully correct unwanted honks, ringing and muddiness. Although it’s often a good idea not to be too heavy-handed with EQ and compression during initial tracking, the powerful sonic-shaping abilities of the unit can be used more liberally during the mixing stage.

Our only slight reservation was the performance of the preamp. While it offers a generous amount of decent quality gain, it doesn’t quite have the valve character that we’d hoped for.

In particular, we struggled to achieve any meaningful tube saturation, even when driving the tube quite hard.

The dbx 676 makes its mark as an exceedingly versatile piece of hardware, offering comprehensive and flexible audio processing during initial tracking, along with powerful sonic-shaping during mixdown. It’s built to a high standard, sensibly laid out and a joy to use. A fully-featured channel strip at a very reasonable price. 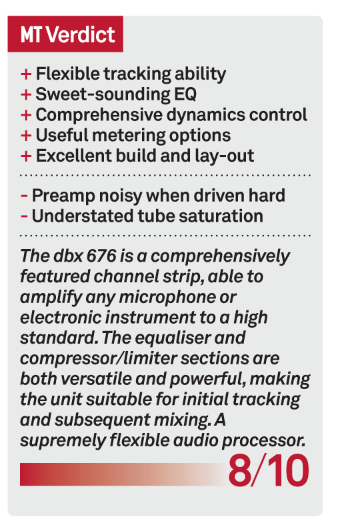