Sonokinetic’s range of Kontakt-based orchestral instruments have all demonstrated a varied approach to sampling, including the collection of unhinged effects and textures contained in Tutti (reviewed in Issue 105) and the phrase-based approach taken by Vivace (reviewed in Issue 110). Excluding the ‘Inceptive Brass’ included in the aforementioned Vivace, Sonokinetic has somewhat steered clear of […] 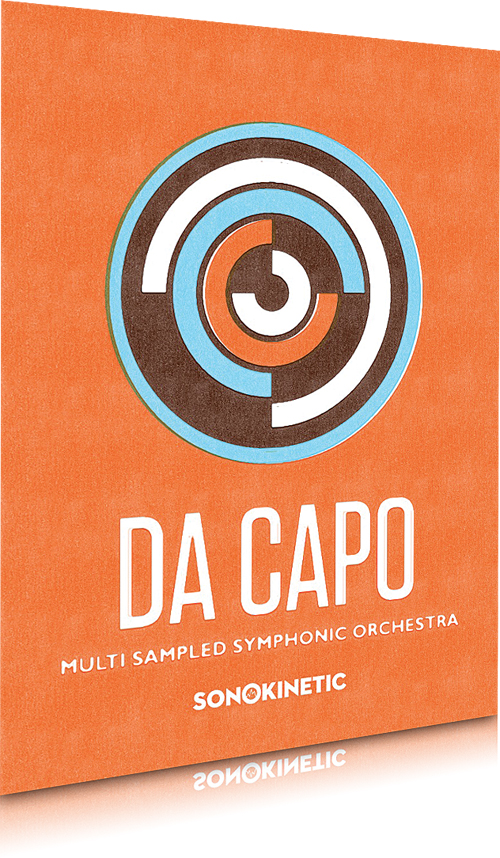 Sonokinetic’s range of Kontakt-based orchestral instruments have all demonstrated a varied approach to sampling, including the collection of unhinged effects and textures contained in Tutti (reviewed in Issue 105) and the phrase-based approach taken by Vivace (reviewed in Issue 110). Excluding the ‘Inceptive Brass’ included in the aforementioned Vivace, Sonokinetic has somewhat steered clear of conventional playable orchestral instruments in favour of tempo-matching orchestral phrases or one-shot effects. With the release Da Capo, though, we’re finally given a series of instruments that can be played on keyboard – although, as you’d expect, it isn’t an entirely conventional orchestral library.

Rather than presenting a series of discrete and separate instruments, though, the concept that powers Da Capo is the sound of a full section – albeit strings, wind, brass or percussion – playing in unison. Indeed, the original release of Da Capo contained just a single Kontakt patch, from which a series of articulations and instrument groups sprung into action. Since version 1.1, though, individual instrument group patches (covering strings, brass, wind and percussion) have been available in addition to the main ‘Da Capo’ instrument. It’s an approach that certainly marks Da Capo out from the competition, but is it a workable solution? 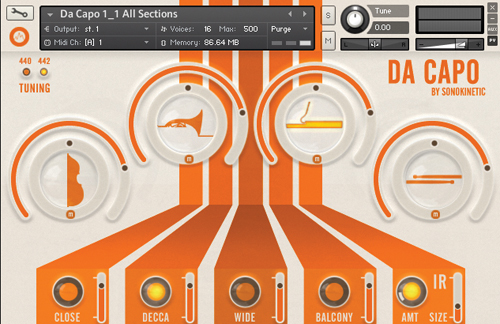 Once you’ve installed the 10GB of content included with the package, one of the most immediately striking qualities is the interface. On the front page we see the four orchestral sections alongside controls for the four different microphone sets (Close, Decca, Wide and Balcony) as well as the option to add an impulse response to create additional ambience. The choice of the four microphones matches the same approach taken in Tutti and Vivace, allowing plenty of scope in respect to the sound of the orchestra.

Branching off from the main interface we find individual pages for the four main instrument groups. It’s on these screens that we find controls to load different articulations for each instrument group, allowing us to assign a sustain to the high strings, for example, while the low strings work with marcato. As you’d expect, there isn’t a great deal of articulations to play with, although each of the principal sections has its own true legato articulation, which is an essential option for expressive melodic lines.

Rather than being a tool pitched at painstakingly re-creating an existing full orchestral score, Da Capo is clearly designed as a composing tool, providing the all-important symphonic colour of an orchestra rather than precise control over each and every instrument. Indeed, by using the full Da Capo master patch you can conceivably create a full-size orchestra patch that spreads across the entire range of the keyboard. Working in this way you can see why the instrument occasionally takes some liberties with instrument ranges, as well as applying some strategic octave-doubling in a few places.

While the approach taken by Da Capo is clearly unique and interesting (not to mention sonically powerful), it does present some challenges to those working with limited processor and memory resources. As you’d expect, a fully loaded Da Capo patch isn’t particularly light on memory usage, nor for that matter polyphony, especially when you start to experiment with all four microphone positions. By providing individual instrument group patches, though, and by adopting a single-microphone setup if necessary, you can arguably lighten Da Capo’s load, even resorting to the 16-bit versions if memory is really tight.

Like Vivace, the unique approach taken by Da Capo won’t be to every virtual orchestrator’s taste, but there’s little doubt that the ingenuity of the mapping and imaginative sectional layering effects make Da Capo an inspiring compositional tool. Despite the bias towards full orchestral layers, it’s also pleasing to note how the patches can be pared down – separating out a collection of three flutes, for example, or some trombones and tubas. Ultimately, Da Capo is an impressive package, marrying some imaginative mapping concepts alongside some beautifully recorded orchestral instruments.