How does the S60A fare as a standalone soundbar? 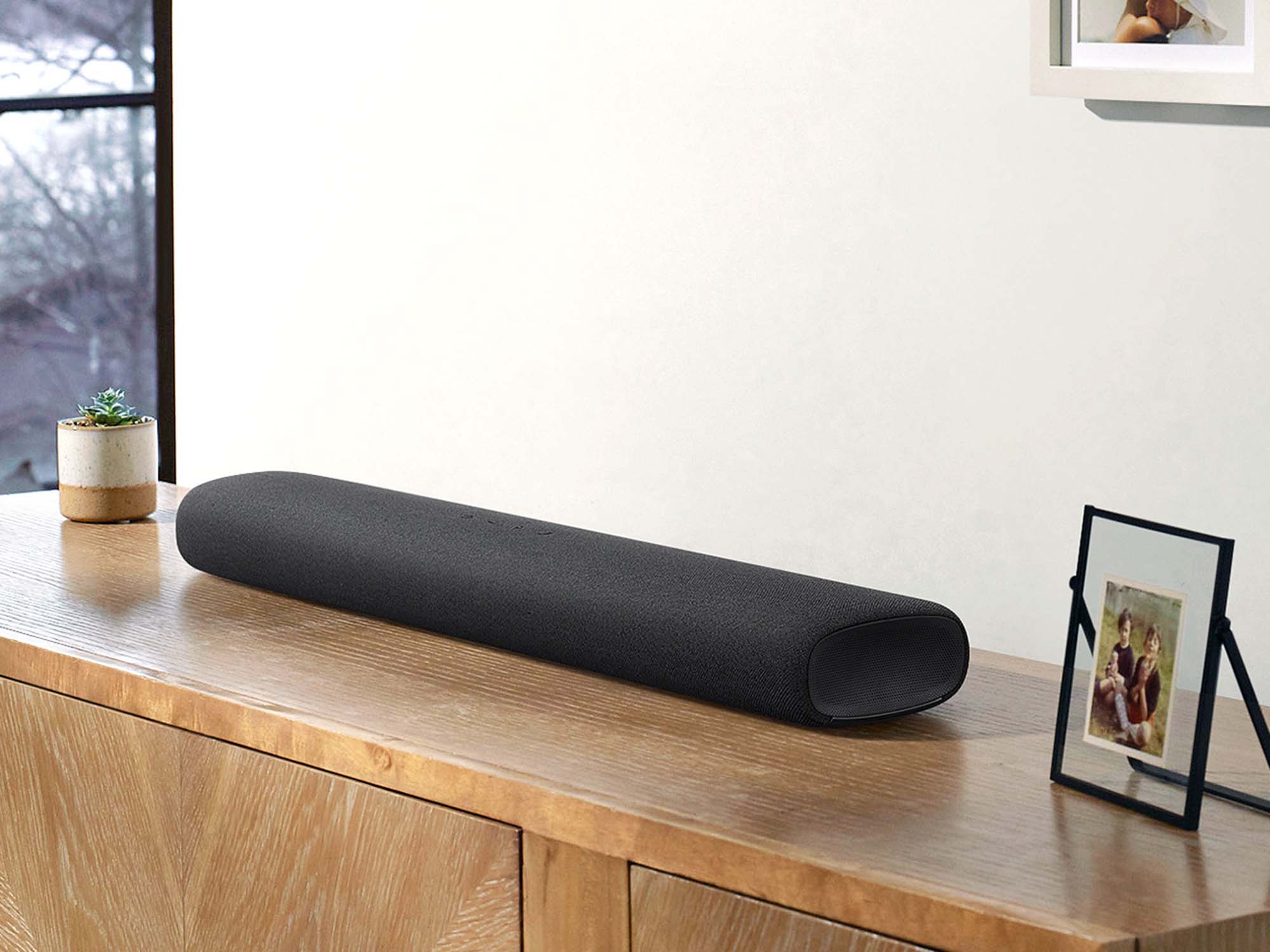 The Samsung HW-S60A offers good performance for an excellent price. It’s well-suited for buyers short on space and budget, plus the option to upgrade it with side speakers and a sub means it appeals to buyers with a mind to create a fuller home cinema system in the future.

If you’ve ever watched a movie where you can’t make out what people are saying thanks to a mix which prioritises background music and big explosions over talking, then the Samsung HW-S60A might be the soundbar for you.

The entry-level compact soundbar comes with five speakers, one of which is dedicated to boosting and enhancing dialogue so you don’t need to mess about with EQ. For those short on space and budget, the S60A represents great value for money – but whether you should buy it or not depends largely on what your future home audio intentions are. That said, there are easy upgrade options to mitigate the soundbar’s limitations.

Samsung has designed the S60A so that it can be set up as a standalone device, or connected to a variety of additional speakers, acting as a cornerstone of a fully-fledged surround sound system. Amazon Alexa and Samsung SmartThings are supported too, so you can have the S60A act as a smart home assistant. You can also connect to the S60A with Apple AirPlay, and stream music to it from your phone either via WiFi or Bluetooth.

The Samsung S60A measures just over one metre wide and about 20 centimetres deep – which ought to be able to sit comfortably underneath most TV stands.

That’s bigger than the Sonos Beam, but not quite as big as the colossal Sonos Arc, the Samsung HW-Q950T, or the Sennheiser Ambeo Soundbar. In other words, it’s moderately sized – bigger, more space-hungry soundbars are out there, but the S60A isn’t exactly tiny either.

You should be mindful about exactly where you position the S60A, because two of the five speakers sit at either side of the soundbar. These side-firing horns also benefit from Acoustic Beam, a number of cavities cut into the top and sides which help the S60A push ambient noises out to the sides and up above the soundbar. If you’ve only just got enough room to squeeze the S60A into a cabinet under your TV, some of those wonderful ambient noises will be muffled and lost.

Wrapped in a fetching fabric mesh, the Samsung S60A looks a lot nicer than your average soundbar, although this Kvadrat coating, while nice to look at and pleasant to the touch, can pick up dust and pet hair. You could pick up the Samsung HW-S61A instead, a light grey variant which might be better at disguising cat fluff.

In terms of physical connections there’s a single HDMI ARC port, and a single optical input. There’s a USB port as well, which is reserved for service use.

Four controls sit on the top of the bar: a multi-function button, which cycles between audio sources – WiFi, Bluetooth, digital audio – two volume controls, and a button which toggles the far-field microphone, which needs to be activated to use Alexa.

There’s no control panel here, and while this makes for a nice, streamlined design, the lack of on-board controls might feel restrictive. Fortunately, you can tweak the S60A’s settings from your phone.

A standard Samsung remote is included in the box, which features a sound control button, allowing you to adjust bass and treble, and pick preset sound modes. There are separate volume rockers for the soundbar and for a subwoofer, if you have one connected.

Pressing the settings cog button sees you cycle through adjustable sound channels – ‘treble’, ‘bass’, ‘centre level’, and ‘side level’ – and then use the volume rocker to raise and lower these to suit.

Here’s where the limitations of there being no control panel or display on the S60A itself are most apparent – aside from a voice telling you what you’re adjusting, there are no confirmatory sounds that tell you the increments by which you’ve altered something. Five white LEDs on the top of the soundbar flash in a sequence left to right for volume up, and right to the left for volume down. Helpful, but this doesn’t tell you to what extent you’ve raised/lowered volume.

You’ll need Samsung’s SmartThings app (iOS, Android) to do that. The app does a good job of mapping the remote’s functions to your phone, as well as letting you adjust everything with greater clarity so you’re not entirely lost. Support for Amazon Alexa means you can also have the S60A act as a massive Amazon Echo speaker, and have it stream music and check the weather.

If you’re less keen on smart home integration, you can also stream music directly from your phone via Bluetooth or WiFi. Apple AirPlay 2 is supported, so you can stream music straight to the S60A from multiple iOS devices without having to manually pair each one.

This configuration adds up to an audio experience that’s impressive, and belies the relatively small size of the S60A.

Powering up the S60A for the first time, I happened to turn the TV on midway through Stardust, the fantasy film based on Neil Gaiman’s novel of the same name. I started watching at the point where Robert De Niro’s airship travels across the screen from left to right – the corresponding noise rumbled out of the S60A marvellously, despite there being no support for surround sound out of the box.

Dolby Atmos and DTS:X are also not supported, so there’s no object-based sound. That said, background audio and crowd noises in movies and sports games still feel rich and immersive.

Dialogue definitely benefits from that central speaker, with the voices of presenters, actors and singers always distinct. In some instances, however, what tends to happen is that sounds close to the presenter’s voice get boosted too. It makes for a slightly odd effect, especially with live news reports.

While there’s not a lot of depth to low-end sounds – for that, you’ll need to add a dedicated subwoofer – bass noises are clean and distinct enough in all of the three pre-set sound modes you choose from: Standard, Adaptive Sound, or Music.

Standard mode offers a well-balanced mix, with nothing sounding especially prominent or loud. Adaptive Sound is designed to dynamically adjust channels depending on what you’re watching, meaning football matches will automatically be mixed differently than movies, for example.

You tend to get greater clarity with Adaptive Sound on. More details are pushed to the fore and given space in the mix, but overall, it feels thinner and quieter than Standard.

Music playback is impressive. Low-end noises are well defined, with the kick drum and bass from Dead Prez’s Hip-Hop clearly separated even at the highest volume level, with no obvious distortion.

There was a bit of buzzing around the bassline from Billie Eilish’s I Didn’t Change My Number, but otherwise the snare, synths and treated vocals cut through, with the clean vocals sounding crystal clear. Likewise, the reverb trails of the guitar and snare hits in Bauhaus’ She’s In Parties seemed to linger for eternity.

Steve Howe’s solo acoustic piece Mood For A Day sounded fantastically detailed. I could practically feel his fingers sweeping the strings as he changed chords. There’s a lot of resonance on this track which can sometimes cause speakers to rattle, but I experienced none of that with the S60A, even with the volume turned all the way up.

Some slight distortion on snare rolls, cymbals and other high-frequency noises was apparent when playing Dave Brubeck’s jazz standard Take Five at full volume, however. The S60A gives you 200 watts of power; chances are you won’t want the speaker at 100 per cent volume all the time anyway.

Priced at under $/£400, the Samsung HW-S60A is well suited for casual buyers looking for a compact, fuss-free and affordable upgrade to their in-built TV speakers.