Of all the Sample Logic libraries to pass through our studio, it’s arguably Cinematic Guitars that’s had the most enduring appeal. Driven by Sample Logic’s mantra to ‘blur the line between music and sound design’, Cinematic Guitars features little in the way of conventional guitar sounds, instead focusing on experimental rhythms, ambiences and instruments sourced […] 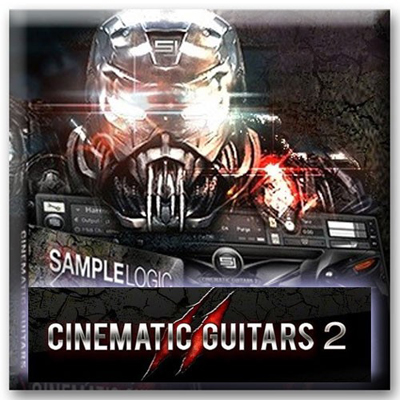 Of all the Sample Logic libraries to pass through our studio, it’s arguably Cinematic Guitars that’s had the most enduring appeal. Driven by Sample Logic’s mantra to ‘blur the line between music and sound design’, Cinematic Guitars features little in the way of conventional guitar sounds, instead focusing on experimental rhythms, ambiences and instruments sourced from (but not necessarily sounding like) a range of acoustic and electric guitars. Cinematic Guitars 2 is the next evolutionary step in this concept, but does in meet the high standards set by the first library?

Axe Murderer
Rather than completely reinventing the wheel, Cinematic Guitars 2 builds on the structure, style and layout of the first library, although, as you’d expect, it makes some important developments in line with the additional features of Kontakt 5. The interface is slicker, as is the multi-core effect sequencer that powers many of the patches. Other significant developments include a new Triggers system for calling up 48 different FX chains and a new macro control knobs that allows Cinematic Guitars 2 to gain an extra layer of dynamism and control.

Having grown to over 17GB in size, Cinematic Guitars 2 is an impressive resource for contemporary scoring. As before, there are three primary categories to play with (Atmospheres, Instrumentals and Percussives) each of which is further subdivided into genres and sound types (organic, electronic, industrial and so on) to make navigation blissfully easy. Fans of the original Cinematic Guitars will enjoy the extra breadth Cinematic Guitars 2 delivers, while new users will undoubtedly revel in its contemporary sound, which includes some superb trailer fly-bys complete with extreme amplitude modulation.

Although many of the individual patches work well on their own, it’s well worth exploring the depths of the Multis folder to experience the fullness of what Cinematic Guitars 2 can deliver. What’s interesting to note is how well the sounds work when layered and combined, largely because each instrument works in a defined way, usually by occupying a particular niche in the frequency spectrum. Although there are some great ‘one-finger’ Multis, it’s good to see that Sample Logic has designed a system that encourages you to be creative and explore your own combination of elements.

While it’s hard to criticise such a well-designed library, there are some points worth picking up on. Firstly, given the increased use of Kontakt’s sound engine, some of the more densely layered Multis placed a heavy load on the processor, especially by comparison to the original Cinematic Guitars library. Obviously, there’s lots of additional functionality that to some degree explains this extra consumption (including the new G-Series EQ), but it does mean that you need a powerful computer to make full use of Cinematic Guitars 2. It’s also worth reading the Quick Installation PDF carefully, as you might need to manually move some image files into Kontakt’s Pictures folder for the Multis’ macro feature to display properly.

Of all the ‘cinematic sound-design’ libraries available nowadays, Cinematic Guitars 2 is easily one of our standout favourites. Its appeal is explained both by the creativity evident in the recording, mangling and programming of the samples, but equally by the unique organic sound delivered by using guitars as a primary sound source, which combines well with the similarly organic sound of a real orchestra. Although clearly pitched at the film and TV scoring fraternity, it’s also well worth pointing out that the application of Cinematic Guitars 2 extends into any genre that appreciates a more creative approach to sourcing sounds.

Overall, Cinematic Guitars 2 is a pleasing evolution of the original concept, packed  to the brim with eerie ambiences, intricate loops and powerful sting effects. It’s certainly an impressive and inspiring package – one that could take months to fully explore – and, thanks to its powerful sound engine, a creative tool that encourages plenty of your own sonic experimentation and manipulation.