Marcus Leadley checks out the latest Boss looper and discovers it’s just like going back to the old school, and all the better for it… Details Manufacturer Boss Price £85 Contact 01792 702701 Web http://uk.boss.info/products/rc-1 Back in the early 2000s, when Roland and Digitech were introducing the first generation of their loop pedals, it was […] 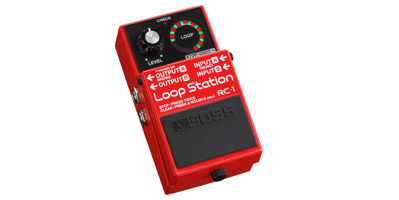 Marcus Leadley checks out the latest Boss looper and discovers it’s just like going back to the old school, and all the better for it… 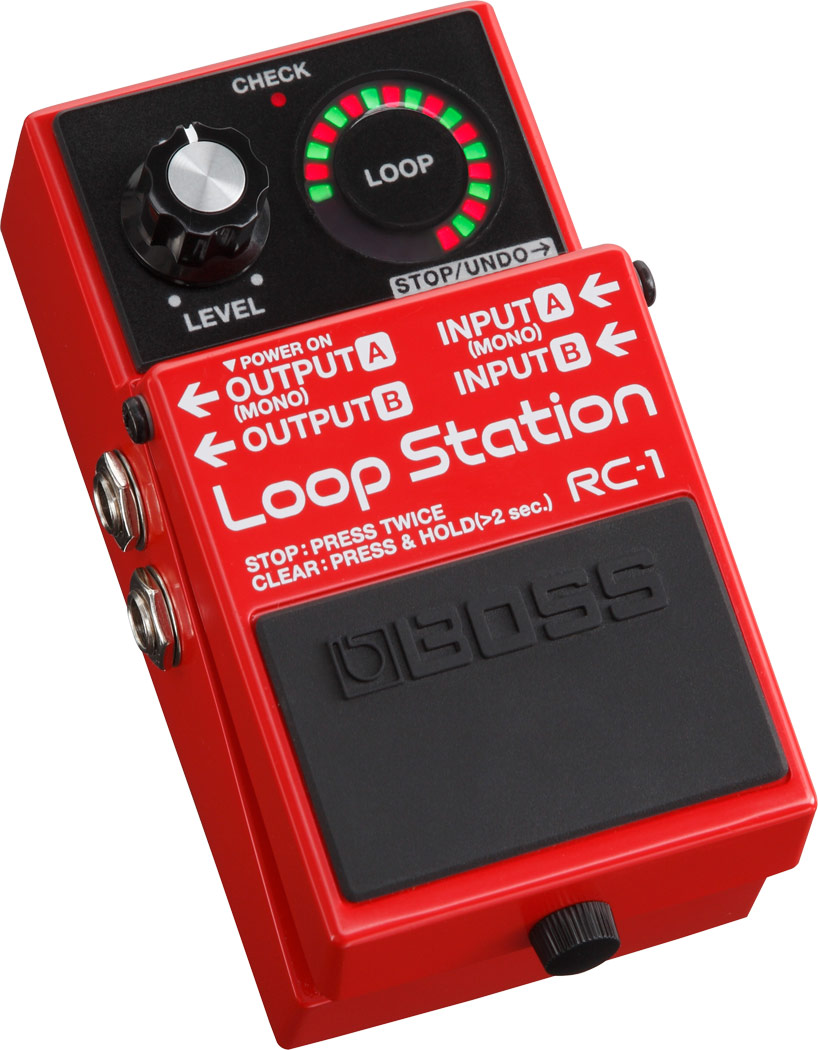 Back in the early 2000s, when Roland and Digitech were introducing the first generation of their loop pedals, it was all about pushing the envelope and crafting an impressive list of features out of the fairly limited memory capacity you could cost-effectively deliver at a mass-market price. It was like an arms race; each new product could record longer loops, sound quality improved, stereo looping emerged and memory slots proliferated.

Then, when the tech stabilised and memory got cheap, the race set off in the opposite direction: ‘performance’ loopers – often as an additional feature for a multi-effects or delay unit – without long-term storage capacity, USB or memory card slots, tempo guides or multiple input connectivity. They were ideal for gigging musicians who wanted to record and overdub long, high-quality loops in the field and wipe the slate clean after a performance.

Well, the latest Boss RC-1 totally delivers in this arena, and it’s a dedicated standalone unit. At just £85, it joins the line-up of what you might call Boss’ standard pedals – a classic format capable of running on a 9V battery (Boss claims 4.5 hours’ running time for this baby), with tried and tested tank-like construction that guarantees years of trouble-free service.

In use tip
Don’t consider yourself a vocalist? Who says you have to use your voice to sing? Connecting a mic to a looper pedal opens a whole world of sonic possibilities.

As well as the inevitable beatboxing, for which a surprising number of totally untrained people seem to have a remarkable aptitude, you can of course point the mic at anything. Turn your world into music – we dare you…

Memory man…
This fire engine red pedal is a stereo looper, offering just 12 minutes of recording time. The unit automatically remembers the loop you’ve recorded when you switch off, but that’s it as far as memory capability goes.

You can create loops featuring stereo effects, or synchronise two different instruments and output them to separate amps or mixer channels. Connecting a second instrument to input B or a stereo source automatically splits the output to discrete stereo.

Otherwise, a mono signal is presented at both outputs – very nifty if you want to use two amps or send a feed to a recorder. The top-panel controls are deceptively simple: all you get is a Level control and the new Loop Indicator – the RC-1 is the first Boss looper to get this and it must be only a question of time before this migrates across all models, because it’s a totally brilliant idea.

The circular indicator has 24 LED segments, which cycle in a clockwise direction: red when recording, red/green when overdubbing and green when playing back.

As soon as you’ve recorded a loop, the overall cycle duration indicates loop length. This means you know exactly where you are in the loop at any point. It’s an extremely useful feature for people who like to work with long loops or build sonic soundscapes that don’t have a formal bars/beats structure.

The single Tromp switch creates some operational limitations. However, the engineers have come up with a set of press, double press and press/hold commands that access play, overdub, stop and clear functions.

You can even access the undo/redo function using the press/hold method while in overdub mode. If you find this a little tricky (it’s possible to accidently erase an entire performance – as this is the purpose of press/hold while in play mode), you can plug in an additional footswitch to give you dedicated one-touch operation.

The unit’s default setting takes you straight from record to overdub mode, and then to play mode. However, powering up the RC-1 while holding down the pedal allows you to switch this order to record/play/overdub if this suits your style better.

There are also two stop modes: default stops the loop immediately if you press the pedal while in play mode; press it twice quickly and the loop will stop at the end of the phrase. 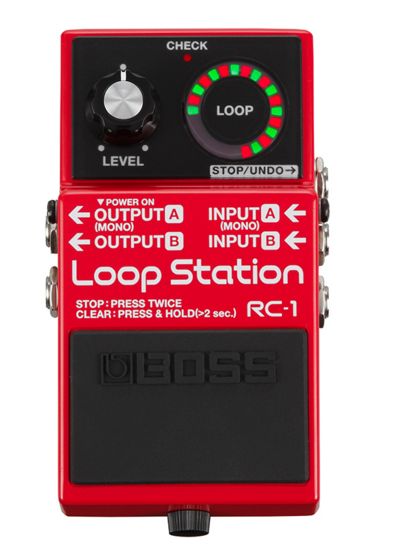 Alternatives
One big question if you’re considering the RC-1 is, do I spend £30-60 more (depending on the discount) on the RC-3? It offers all the same features (except the Loop Indicator) and adds USB for archiving or downloading audio, an aux input, rhythm guide, 99 presets and a massive three-hour storage capacity.

If you’re after a low-cost looper with a tiny footprint for a crammed pedalboard, then the Mooer MML1 Micro Looper (£74.99) is a tiny-weenie mono device, offering 30 minutes of recording and overdubbing time.

For a stereo option, Digitech’s JamMan Stereo XT (£118) is hard to beat, as it offers a feature set equivalent to the RC-3. If you demand a bit more versatility from your pedals, TC Electronic’s Flashback Delay and Looper adds a range of 10 delays, including tape and analogue emulations to the stereo looper capability.

In Use
While the contemporary orthodoxy suggests that it’s guitar players who make the most use of loop pedals, the move to stereo performance changes all that. I connected the RC-1 up between a Nord Lead 2X and mixer and had a really fun couple of hours generating musical textures and ideas.

Having a loop pedal on the floor makes playing and recording incredibly simple, and the sound quality is such that you can record loops in real time as analogue events over to your DAW to work with later – and this also gets you round any perceived memory limitation.

Being able to record stereo effects adds further potential – so the vintage Ensoniq DP/4 simply had to come out of the closet to add a bit of sonic mayhem and tonal grit.

Double-tracking bass and guitar loops with a friend was also fun. This felt an awful lot like basic songwriting; sometimes limitations can be liberating and creative, and playing with this RC-1 felt like being back in a room with a tape-based four-track 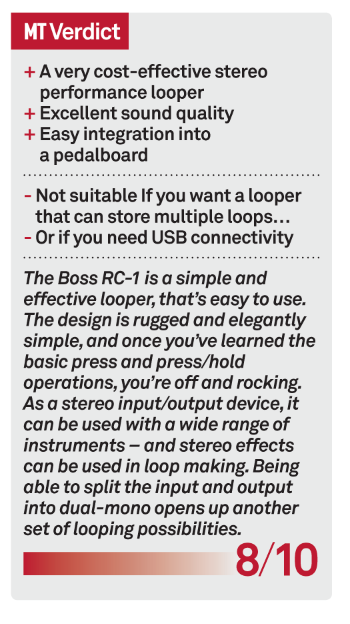