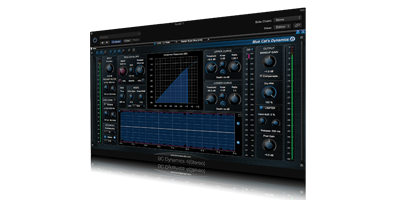 Why use five plug-ins when just one can do the job? Hollin Jones takes control with Blue Cat Audio Dynamics 4… 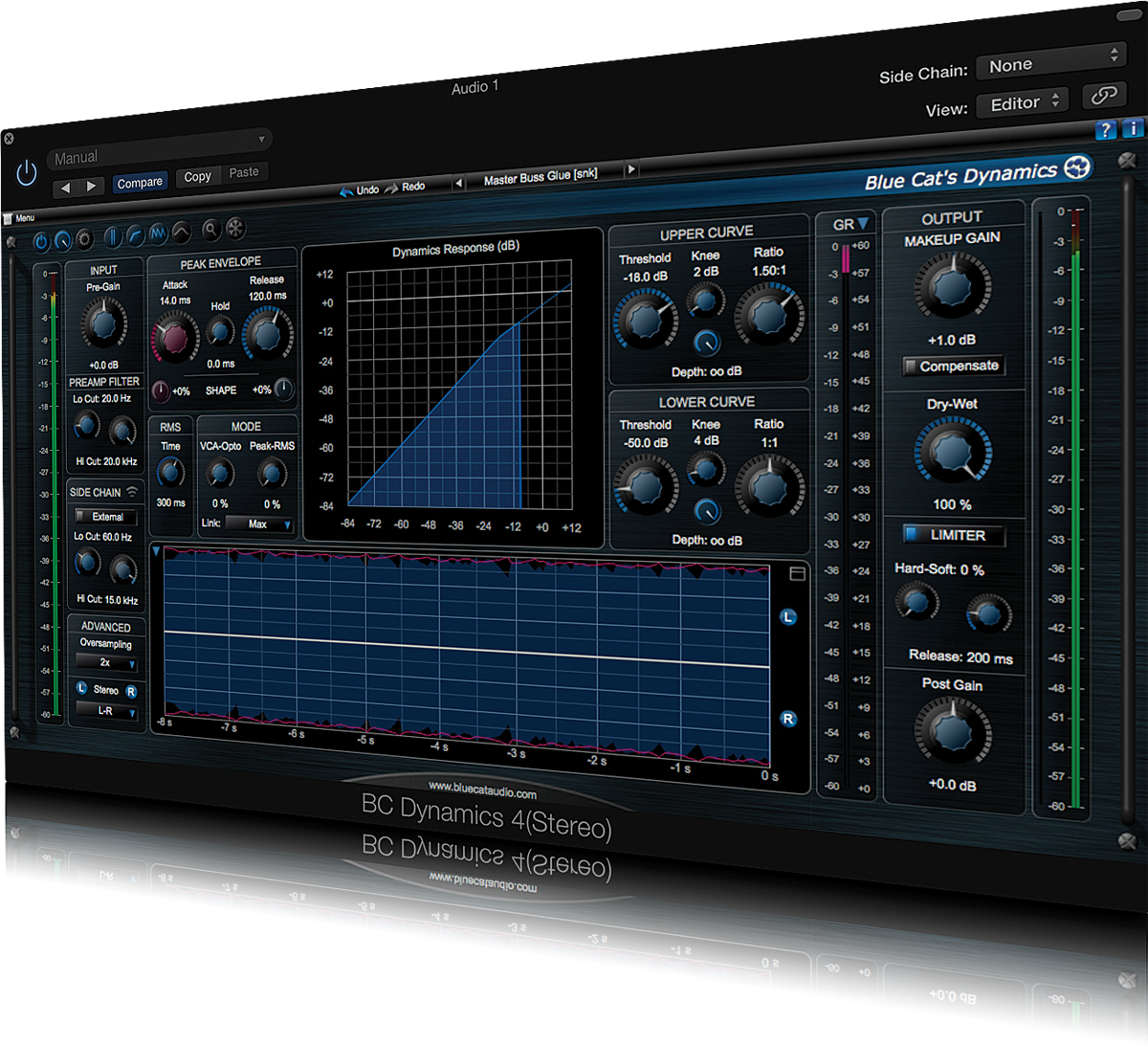 Blue Cat Audio makes a range of plug-ins for serious audio processing and analysis, and even has a few great free ones on offer. Dynamics 4 is the latest version of the company’s all-in-one dynamics processor and it’s available for Mac and PC. Blue Cat’s adept at developing plug-ins which are actually suites of processors contained inside a single module.

From a user’s point of view this is great, since not only do you generally save money on buying multiple effects, but there’s also much less hassle involved in dealing with a single window which can handle a multistage process.

Multiskilled
This is a fully-featured dynamics processor which can be used as a compressor, limiter, gate, expander or waveshaper – or, indeed, all of these things at the same time.

These are staples of the mixing and mastering process and effects which everyone will need at some stage. You may already have separate DAW plug-ins covering these effects but the idea of using a third-party model is that it should do things better, and Blue Cat’s effects tend to be significantly more flexible than most, and that’s certainly the case here.

The interface has been completely redesigned, although its basic look is still recognisably that of a Blue Cat product. Most significantly, the different sections can now be shown/hidden using buttons along the top of the display. While fully expanded it’s quite large, but you can just hide the sections you don’t need. Dynamics 4 features an animated zoom function for its meters and curves, and there’s also a ‘frozen’ view.

You can monitor and process in pretty fine detail too, with peak/RMS or opto/VCA mode selection, peak envelope shape control and depth control to limit the gain range. Visual feedback can be recorded as automation curves in your DAW, to view them over time. 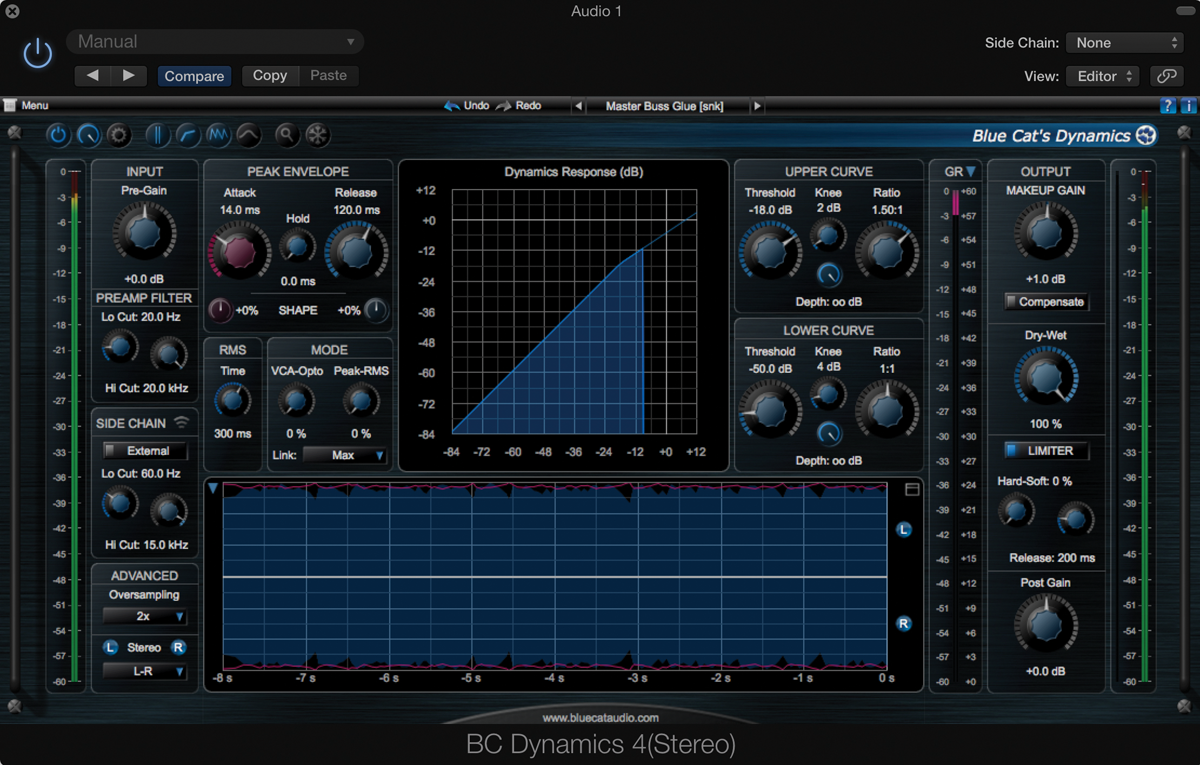 Something that’s relatively unusual is that the plug-in has several filters to control the frequencies affected by compression and there are also some handy stereo features, such as mid/side processing, multiple stereo linking and the option to choose which channels are affected by the processing.

This is a pretty serious dynamics plug-in and far more capable than the standard model which may have come with your DAW. Arguably, using Dynamics 4 is overkill if you just want to make your vocal sit in the mix, but if you need greater control over the fine detail of your dynamics, it’s very well suited.

In addition to the compression stage, there’s also a brick wall limiter and clipper before the output, which has relatively simple controls, so combined with an EQ you could easily use Dynamics 4 in a mastering chain.

Family Features
Dynamics 4 also shares some of Blue Cat’s standard interface features, which help with its workflow. You get up to 4x oversampling for better sound quality, latency-free operation and no CPU usage when idle plus a skinnable interface with tweakable transparency so you can change its look and feel.

There’s easily accessible MIDI learn throughout the controls so you can quickly link hardware to parameters inside the effect. Switching the plug-in on or off while audio is playing won’t result in any pops or clicks, and there’s undo/redo plus the ability to copy and paste the plug-in’s state between instances.

It even claims to support any sample rate, although presumably, in practice, this means only as high as your hardware will go. Shortcuts to the manual, a well-designed preset menu and a new, integrated presets manager make Dynamics 4 much easier to use.

You get a really good selection of presets, grouped by category, covering everything from controlling the dynamics of drums, pianos or snares to multiple mix characteristics.

The ability to precisely control processing behaviour, coupled with Blue Cat’s customarily detailed visual feedback, makes Dynamics 4 an excellent choice if you really want to get to grips with the way sound is processed.

The customisable interface and animation make it less sterile than before and working with multiple processes inside a single window can really help speed up workflow. If you’re serious about dynamics processing, this has to be high on the list of go-to plug-ins 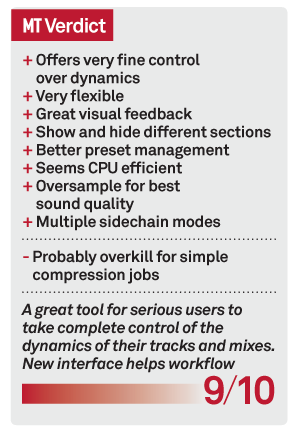