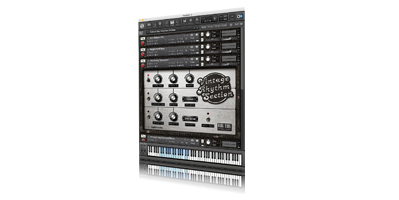 Sometimes you want a bit of dirt and warmth in your recordings. Hollin Jones road tests the Big Fish Audio Vintage Collection 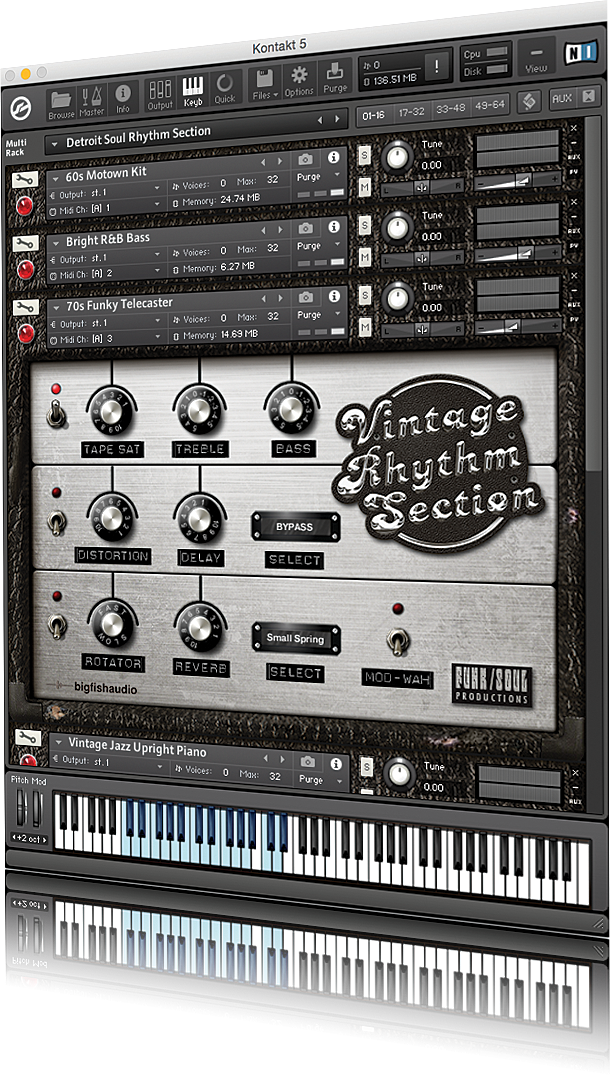 In this age of perfectly crisp digital sound, it’s not uncommon to find people searching for a more imperfect quality for their productions. For some kinds of music, a bit of dirt or grime or a very slightly wobbly sound is exactly what’s called for to bring a sense of authenticity to tracks that may have been created inside a computer.

The Vintage Collection combines three of Big Fish Audio’s virtual instruments, and each one fits the retro bill. Running inside Kontakt Player 5 free or full versions, it can work as a standalone or plug-in product and weighs in at around 16GB, though the library content can be moved to a secondary drive easily.

The collection consists of three products, and when bought together represents a saving of over £130, so you are effectively getting three for the price of two. Thematically, they are linked and make up many of the kinds of instruments you might need if you were producing soul, funk or blues tracks, though they will of course work in other genres as well.

The Strings and Horns collections are fairly self-explanatory and the Vintage Rhythm Section contains a range of instruments including drums, guitars, basses and keyboards. For the Multis, where more than one sound is present in a Kontakt patch they have been preset to use different MIDI channels.

So if you load up a jazz group ensemble, for example, your drums will be on one channel, bass on the next and so on, and you can click between them to play them, assigning different MIDI tracks for each one for easy recording. This also saves on loading lots of instances of Kontakt. 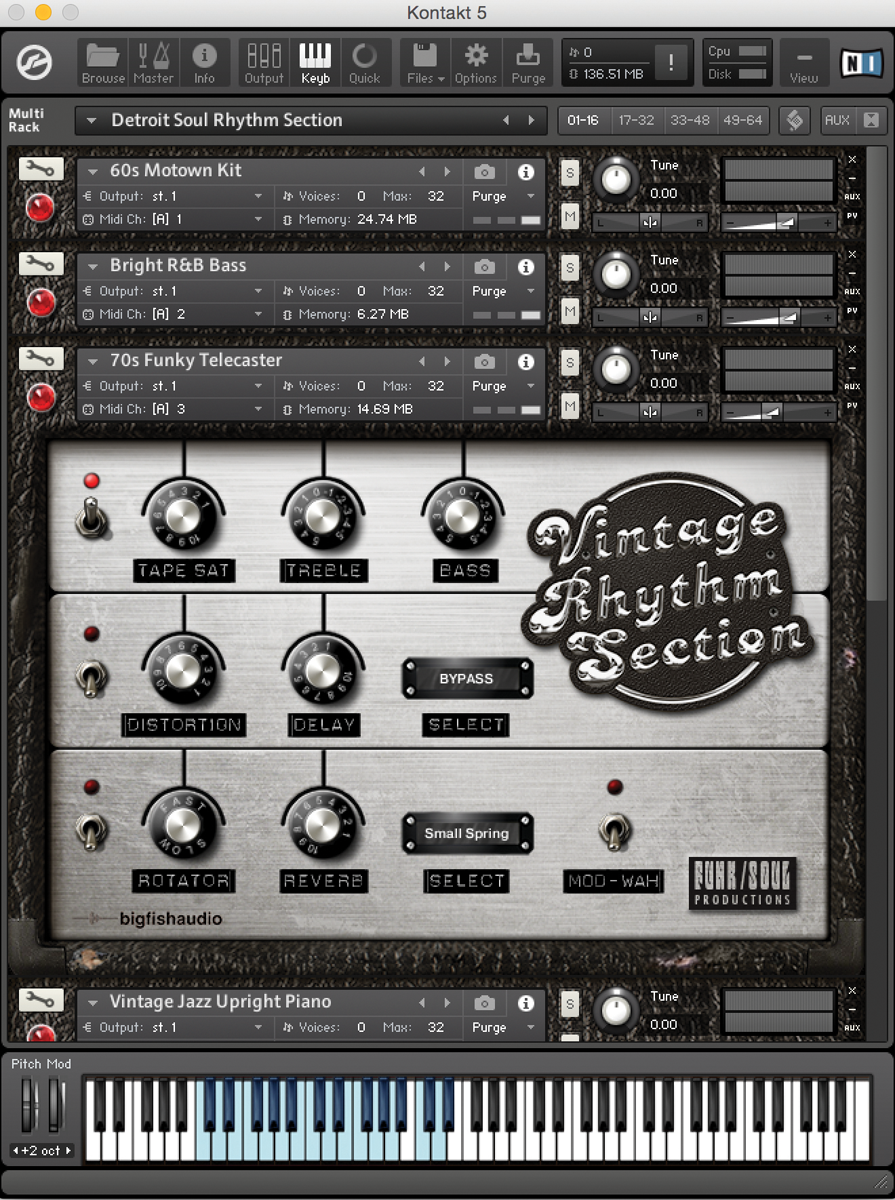 Exploring the Collections
Vintage Horns isn’t supposed to be clean-sounding, but rather captures the essence of 60s and 70s soul and funk horn sections. As such, it has some great preset horn sections, such as Memphis Soul, JBs, Detroit and Philly Soul and Oakland, all with specific combinations of horns. Every individual horn has its own player with a set of controls, each with on/off controls and an Amount knob. There’s tape saturation, high EQ and reverb plus a reverb-type control.

It’s the saturation that probably does the most to add grit to the sound, though the EQ helps too. Vintage Strings does the same but for strings, emulating the violin string sections of R&B, soul and funk records of the 60s and 70s.

Basing the sampling recordings on session notes from actual Motown recordings, players were recorded in authentic spaces similar to the ones used back in the day, rather than large concert halls. There are patches for two, six or 12 violins, and the interface has the same controls as the horns collection. What’s added here is a Harmonize section, where you can tweak the behaviour of harmonised patches to create chords and intervals.

The Vintage Rhythm Section is a little wider in scope and contains different types of instruments, though the Multis are helpfully pre-grouped into racks of stuff that belong together based on style. There are two interfaces: the first is a drum mixer for drum patches, with a nice old-fashioned look and feel.

The other module houses all the other kinds of sounds and has three switchable effects sections. The first contains EQ and tape saturation, the second has distortion and delay and the third gives you reverb, a rotator effect and a wah control.

These are available on every instrument, although they’re better suited to specific ones. So you can put distortion and wah on a piano, but it sounds better on a guitar.

The Vintage Rhythm Section is basically the rest of your band, and very good it sounds too. There are three categories of instrument presets: jazz, R&B and rock – and within each one, individual instruments that can be loaded such as pianos, organs, Rhodes, drums, basses, guitars and so on. The Multis section has an impressive range of style-based setups, again with the instruments split across MIDI channels for instant playback and recording.

Go Retro
This is a great collection and achieves the aim of bringing warmth and a retro feel to a production, as opposed to the mechanically perfect quality you sometimes get with sampled instruments. This has been achieved through diligent recording and production as much as the effects in use inside the instruments.

As ever with Kontakt instruments, extensive use is made of modifier keys, so you can trigger runs, patterns and melodies as well as playing regular MIDI notes. The Rhythm section is the most diverse of the three collections, but all three hang together very nicely. 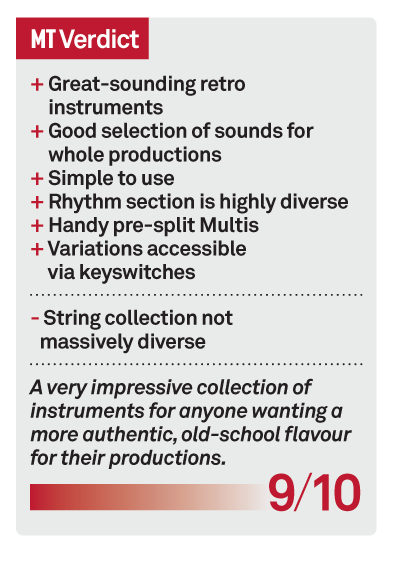