Audio-Technica AT5047 Review – Picking up the Details

Why use one capsule when you can use four? Mike Hillier explores the rectangular world of the AT5047 condenser…

Usually, when you hold a large-diaphragm condenser mic up to the light, you can see through the grille to the capsule – a roughly 25mm-diameter circle, but hold the Audio-Technica AT5047 up to the window and you’ll see something altogether different. Instead of a single circular capsule, the AT5047, like its sibling, the AT5040, houses four rectangular capsules, each approximately 25mm x 15mm.

Audio-Technica isn’t the first microphone to use rectangular capsules of this kind – the idea was developed by Rune Rosander of Pearl Microphones in the 1950s, and both Pearl and Milab have a range of rectangular-diaphragm microphones to this day.

The other advantage of rectangular capsules is that, since the capsule has greater length along the height axis than the width axis, it becomes less sensitive to off-axis sound coming from above and below, which can be useful for positioning the mic in order to eliminate bleed. 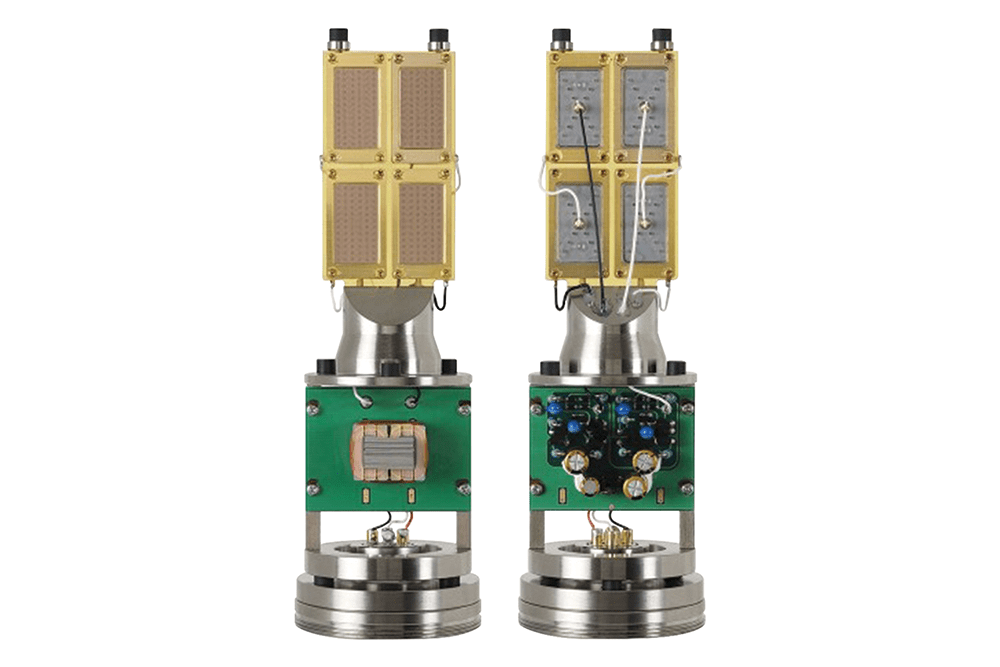 By incorporating not one but four rectangular capsules, summed electronically, Audio-Technica is able to boast a total surface area roughly twice that of a typical large-diaphragm condenser, equating to considerably lower self-noise, high sensitivity and an incredibly detailed on-axis response. The AT5047 doesn’t have quite the low self-noise, or the sensitivity of the AT5040, however, as it has a transformer-coupled output, rather than the transformerless output stage of the AT5040.

The AT5047 ships with the AT8480 shock mount and a custom hard-shell carry case. The AT8480 is custom made for the AT5040 and AT5047 mics, and uses a C-shape rather than full circle to hold the mic, enabling you to get the capsule right up against whatever you’re mic’ing.

Although if you are going to place it close up to a source, you’re going to need a preamp with a good pad, or a lot of headroom, as this is a very sensitive mic and there is no onboard pad to assist with loud sources, nor in fact is there an onboard high-pass filter for dealing with low-end rumble or proximity. By excluding these features, Audio-Technica claims it’s able to make a more honest and less coloured microphone.

Testing began with the AT5047 placed right up on the grille of a Fender Deluxe amp, with a Neumann U 87 (in cardioid mode) and Shure SM57 for comparison. The AT5047 was easily the most neutral of the three microphones. Both condensers captured considerably more top and bottom end than the SM57, but with the U 87 pushing the midrange back a little more, presenting a slightly fatter, more aggressive sound overall than the AT5047.

In solo, the U 87 was easily the most exciting of the three microphones, although it’s hard to argue that the SM57 would be the most useful in a dense mix and that the AT5047 might be useful alongside the SM57 to blend in some additional depth, should it be required.

On vocals, we again set up the Neumann U 87 as a comparison, with both male and female vocals to compare. On this particular female vocalist, the U 87 has always sounded a little nasal and a little EQ is always required to smooth out the mid-range. Yet the AT5047 had no such issues, sounding smooth and clear right through the mid-range.

Despite the lack of a high-pass filter, the AT5047 didn’t have a problem with proximity, or rumble, and took mild compression from an LA-2A well, with only the slightest increase in low mid-range as a result. This was a very detailed, open and natural signal, leaving the opportunity to shape the vocal with EQ to creative choices, rather than to corrective ones.

On our male vocal, the AT5047 was equally detailed and open, with just a hint of weight. The U 87, by contrast, had a more enhanced bottom end, which gave the impression of a larger-than-life vocal, although the mid-range felt a little more strained.

This was aided by the use of compression, which pushed the mid-range forward more clearly, and while it didn’t have quite the clarity of the uncompressed AT5047, the extra weight of the U 87 did give the vocal a more impressive character, making this a close decision, and one which would no doubt come down to the specifics of the arrangement.

Options: that’s what the 5047 gives you. Although, as we state in the review, there are other mics that provide greater high end and low-end specificity, the 5047 can offer stunning detail across a vast range of frequencies and is one of the most balanced microphones we’ve looked at. 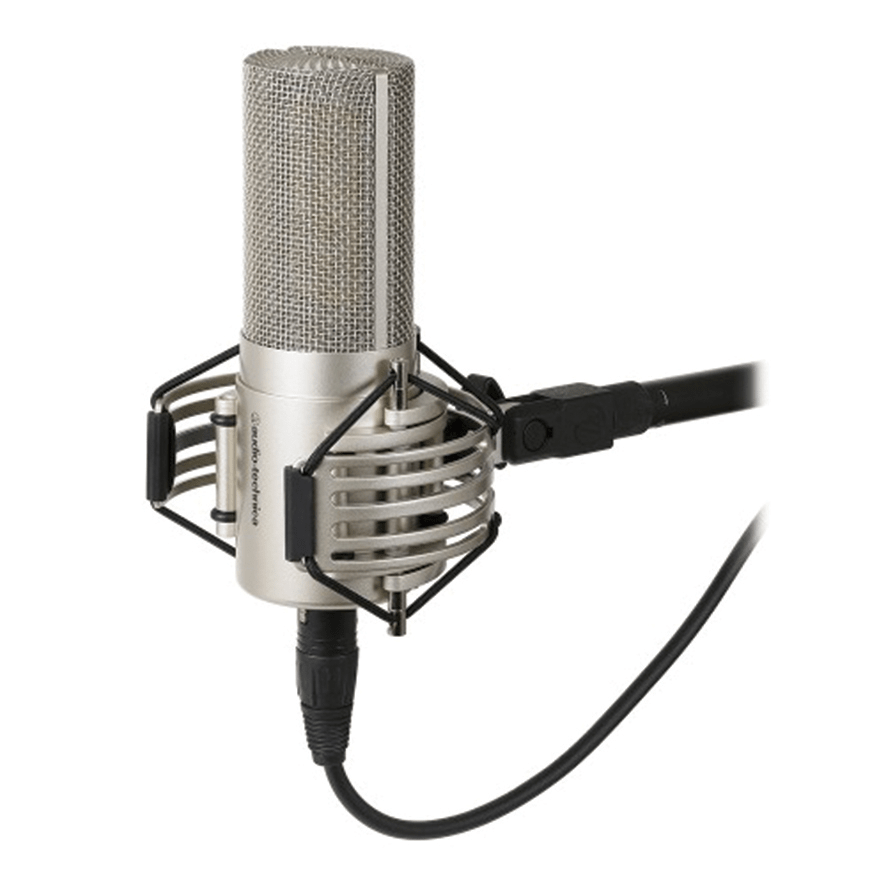 It’s certainly highlyrecommended for those who are elevating into high-end, professional recording. So if you’re after a new main vocal mic, then this has to be a consideration in your research. It’s one of the smoothest vocal microphones on the market.

Hip to be square

For our final test with the AT5047, we placed the mic about a foot in front of a kick drum, again alongside the Neumann U 87, although this time, we switched the U 87 into figure-of-eight mode, as this is our preferred technique with this mic on a kick drum. As expected, the U 87 produced a stronger, more in-your-face kick drum sound, with an enhanced bottom-end depth, and bright, punchy snap around the top. It also captured some room tone, and a small amount of snare and toms, which was easily cleaned up in the DAW.

This was in part because of the figure-of-eight polar pattern, but even in cardioid mode, the U 87 is going to pick up some bleed from the rest of the kit at this distance. The AT5047 by comparison had a precision that meant very little bleed was captured. We were able to angle the mic so that the top of the capsule was pointed at the snare, to reduce bleed from this source specifically.

Careful analysis is always going to reveal some bleed, even with this mic, but we were able to get a good 6-8dB less snare in the AT5047 this way compared to the U 87, enabling us to be less worried about any bleed. The detail from the AT5047 on kick drum also extends to a more snappy sound than the U 87 recording, which became more obvious as we applied compression to the recordings, with the beater attack on the AT5047 sounding as if it had been processed through a transient designer in comparison to the U 87. Blending the two mics together might be one option for an ideal kick sound, using the attack of the AT5047, and the heavier, deeper body of the U87.

The AT5047 is a beautiful-sounding, detailed microphone, which offers a very different flavour to the Neumann U 87. It has a nuance and detail that’s more like a small-diaphragm condenser than any other large-diaphragm mic we can think of, and a directionality that is more akin to a hyper-cardioid microphone than a cardioid one.

It really excels at neutral, honest mic’ing techniques – those which aim to get the most out of the instrument itself, rather than hyping, or enhancing the recording. This will no doubt make it a go-to microphone for orchestral work, but it definitely also has deserved a place in the mic cupboards of pop and rock engineers, as an alternative voicing for when the mics at your disposal just aren’t working.

The company’s AT5040 is very similar to the AT5047, but features electronically balanced outputs rather than transformer-coupled ones, a spec distinction which results in even less colouration of the signal than heard with the AT5047.

If you’re looking to experiment with rectangular diaphragms at a lower price point, the Pearl Priority is worht checking out. The Priority has been tuned with a slight presence boost around 5kHz to assist vocal recording.