Mike Hillier takes two new dynamic mics from Audio Technica – one designed for capturing toms, the other, a more flexible ‘instrument mic’ – into the studio to see how they fare against the competition… Details Manufacturer Audio Technica Price ATM230 £140, AE2300 £249 – The ATM230 is also available as a three pack, for £350 Contact […]

Mike Hillier takes two new dynamic mics from Audio Technica – one designed for capturing toms, the other, a more flexible ‘instrument mic’ – into the studio to see how they fare against the competition… 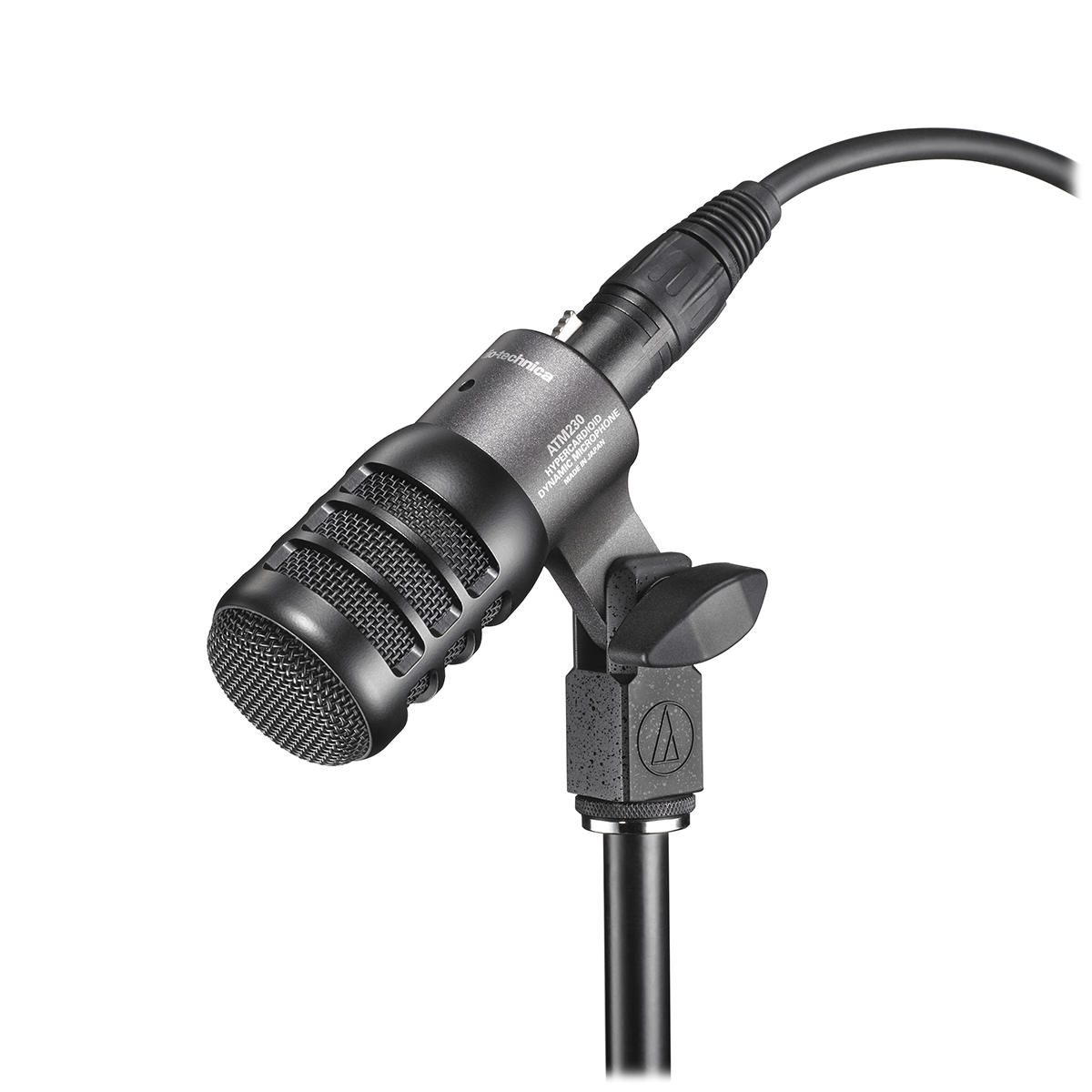 Audio Technica has launched a new pair of dynamic microphones, intended for use on instruments and percussion. We took them along to the studio to test out and discover if either mic could find a place alongside the regulars in our mic cabinet.

The ATM230 is a hypercardioid microphone voiced specifically for use on toms, with a solid low-end, presence peak in the upper mids, and steep roll off beginning around 12kHz. The mic comes with a built-in stand mount, but also comes with a drum mount, so it can be clipped directly to the rim of the kit piece, without the need for a stand.

This kind of clip is very popular with live engineers, who don’t have the luxury of space that studio engineers often do. This one provides a little over an inch of movement towards or away from the rim, in addition to the ability to position the angle from the mic itself. In our experiments with the mic, this provided enough flexibility to get a good tom sound, and we envisage using the clip rather than a stand, even for studio use.

We compared the ATM230 with the Sennheisser MD 421 and a Heil PR 30, two of our favourite tom mics. On floor tom, the three mics each had their own quite different tones. On paper, the ATM230 and PR 30 should extend lower than the MD 421, while all three mics have slightly differently pronounced presence lifts. In practice, though, the bottom end of the ATM230 and MD 421 sound quite similar, while the Heil mic seemed to accentuate the fundamental of our floor tom. 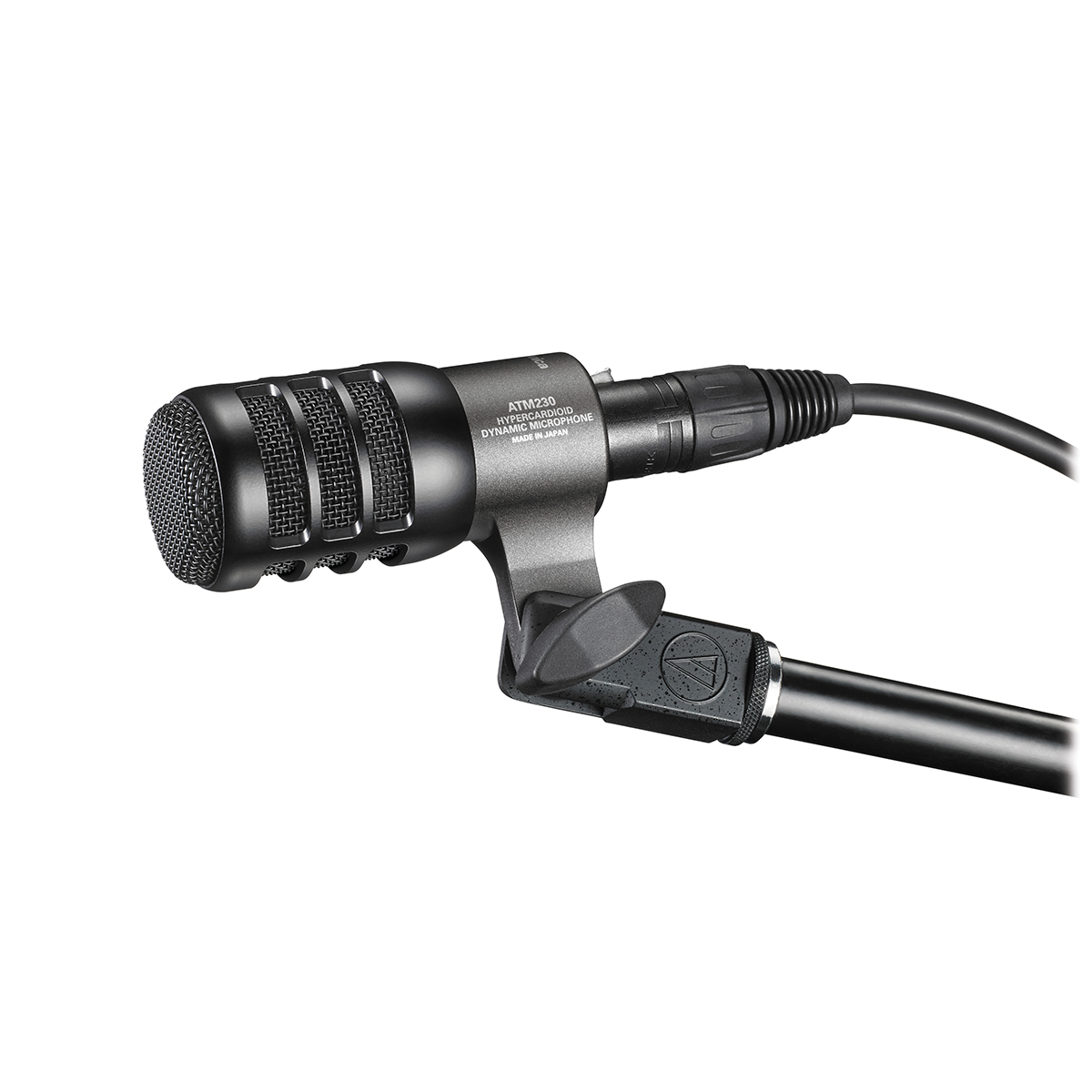 Through the mids, the Heil has a more mix-ready scooped feel, while the ATM230 and MD 421 both sound smooth and, again, quite similar. Up at the top end, the ATM230 has a little more attack and punch than the MD 421, and sounded more like the PR 30, while the MD 421 sacrificed the punch for a little more air.

Switching to a 10-inch rack tom, the bass boost on the Heil mic is there, but less pronounced, while the ATM230 and MD 421 again sound similar at the bottom and through the mids. At the top, though, the ATM once again has a little more knock, at the expense of a little air compared to the MD 421.

Where the ATM230 was designed and voiced specifically for toms, the AE2300 has been voiced as a more flexible ‘instrument’ mic, which Audio-Technica claims “excels on guitar cabinets, brass and percussion”. Since we were already set up for drums with the ATM230, we put the AE2300 on a snare, alongside a Shure SM57 and a Heil PR 20.

Of the three mics, it’s worth pointing out that the AE2300 is easily the smallest – roughly half the length of an SM57 – which makes it easier to fit into the gap between the hi-hat and the snare. For our tests, however, we actually removed the hi-hat in order to get all three mics around the snare. 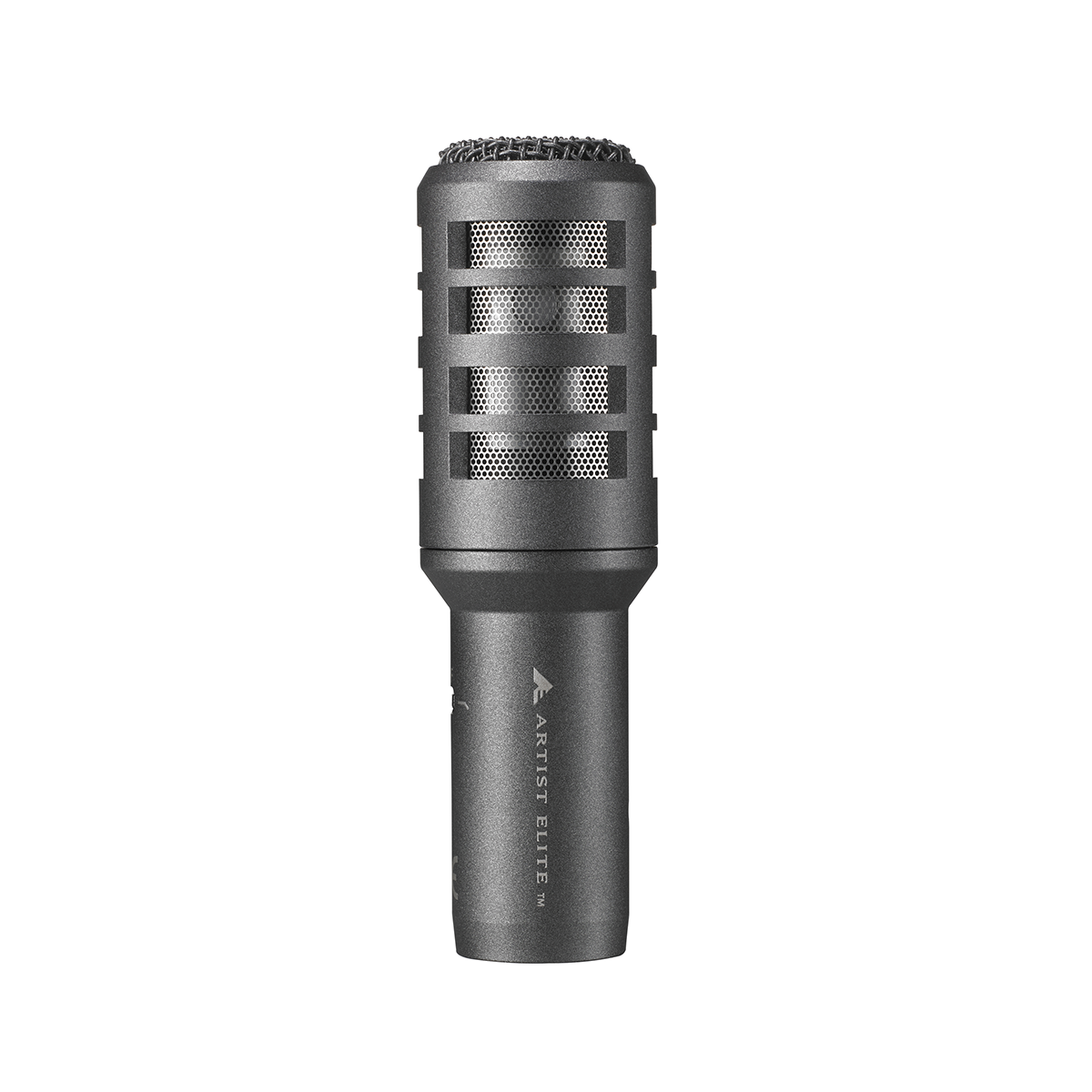 Both the Heil and the AE2300 have a bigger, stronger low-end than the SM57 – the beefy bottom of the snare being lost a little on the Shure mic. All three mics shape the snappy upper attack of the snare in different ways.

The AE2300 has perhaps the smoothest attack of the three, with a strong crack and more air around the top of the instrument. The Heil sounds similar through the mids, but lacks any of the air present up at the top of the AE2300 signal, while the Shure has a softer attack, while still rolling off the air like the PR 20.

Next up, we tested the AE2300 on an electric-guitar cabinet, using a Fender Stratocaster into a Vox AC30, again, using the Shure SM57 and Heil PR 20 as comparisons. On guitar, the Heil and AE2300 again have a stronger low end, capturing the growl of big, open chords with more heft than the SM57. However, it is our experience with the PR 20 that this often gets in the way in dense mixes, requiring some high-pass filtering in the mix which isn’t always necessary with an SM57, so don’t assume that the extra bottom is always going to be to your advantage.

The real test of a mic on this Strat/ AC30 combination is how it captures the bark in the upper mic-range, and how it deals with the fizz above this. The Heil PR 20 captured the bark with the most aggression, while the AE2300 and SM57 were brighter and had more focus on the fizzy top-end than the Heil. The AE2300, in particular, captured a lot of the top-end fizz. 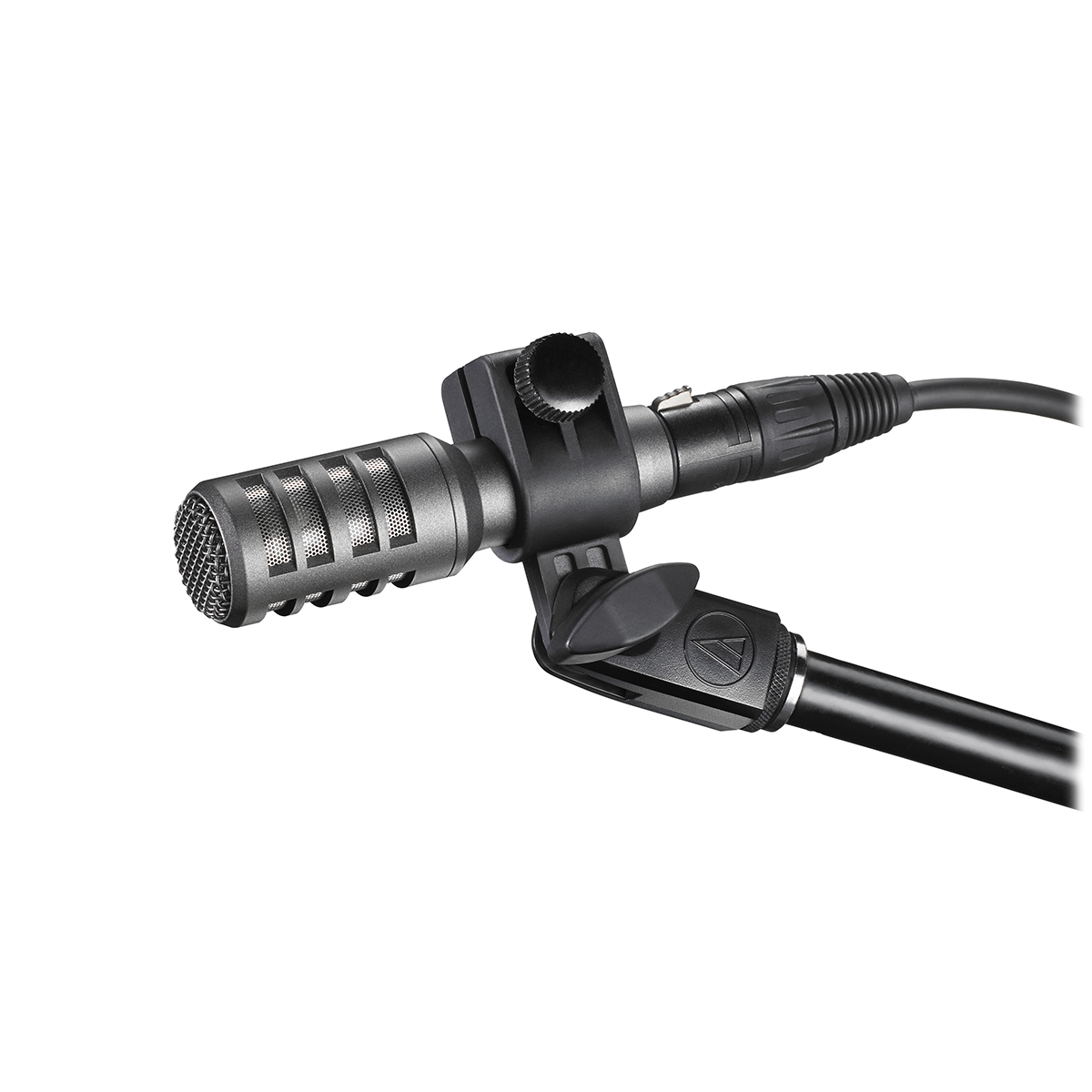 However, this is where the AE2300 has a trick up its sleeve. The mic comes equipped with a low-pass roll off built in, focused around 6kHz. Engaging this switch and recording the guitars again produced a much more focused sound, with less fizz, but still a brighter, more airy sound than either the SM57 or the PR 20. The guitar’s barky upper-mids now sounded more similar to the PR 20, and with the switch engaged, the AE2300 was easily our favourite of the three mics.

The Sennheiser MD-421 is the classic tom mic, and is also very useful on bass cabinets and even vocals, making it far more flexible than the ATM230, but it also comes with a more hefty price tag. When it comes to mic’ing up snares and guitar cabinets, the market is packed with dynamic-mic options, all trying to take the crown from the classic Shure SM57.

And while the SM57 will never sound bad, we have often found ourselves preferring another mic for the task. The AE2300 is a classic example of that scenario, capturing a much more focused guitar sound when the filter was engaged.

We’re always on the lookout for new and interesting-sounding dynamic mics, and these two Audio-Technica models don’t fail to deliver. The ATM230 is limited by its voicing, but uses could also be found on percussion other than toms. And for only £299, the three pack makes a compelling tom-mic setup.

The AE2300 on the other hand is particularly versatile, and the addition of the switchable low-pass roll off makes it a perfect candidate for guitar cabinets. On the right track, both of these mics could find a place – but the AE2300 in particular is going to be hard to replace, and might find its way to the front of the queue for guitars in our studio from now on 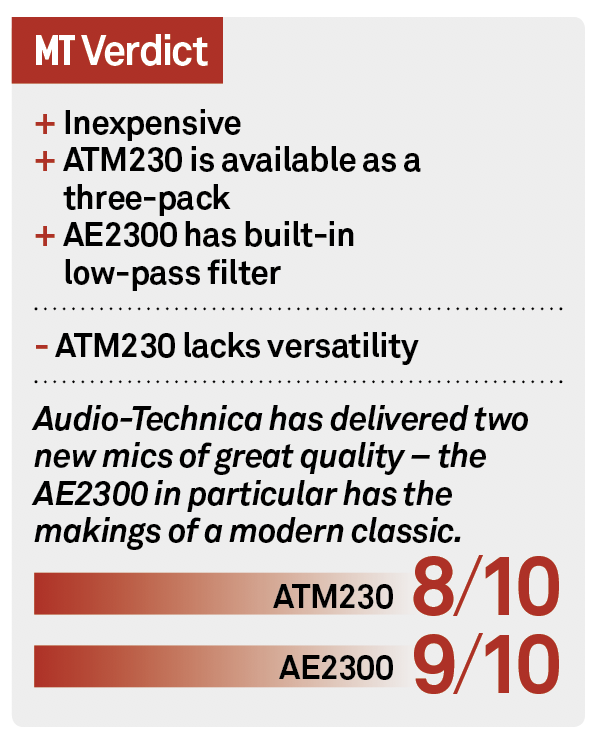