Arturia is offering a fully-featured drum machine in the form of the new, all-analogue DrumBrute. Bill Francis finds out how much beauty is in this beast… Details Manufacturer Arturia Price £380 Contact www.arturia.com/contact Web www.arturia.com French company Arturia has been building a strong reputation over the last decade with a steady stream of well-received hardware and software […] 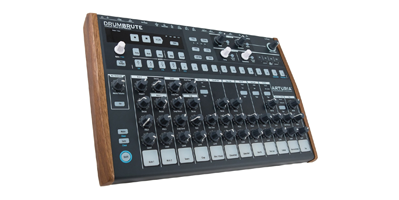 Arturia is offering a fully-featured drum machine in the form of the new, all-analogue DrumBrute. Bill Francis finds out how much beauty is in this beast… 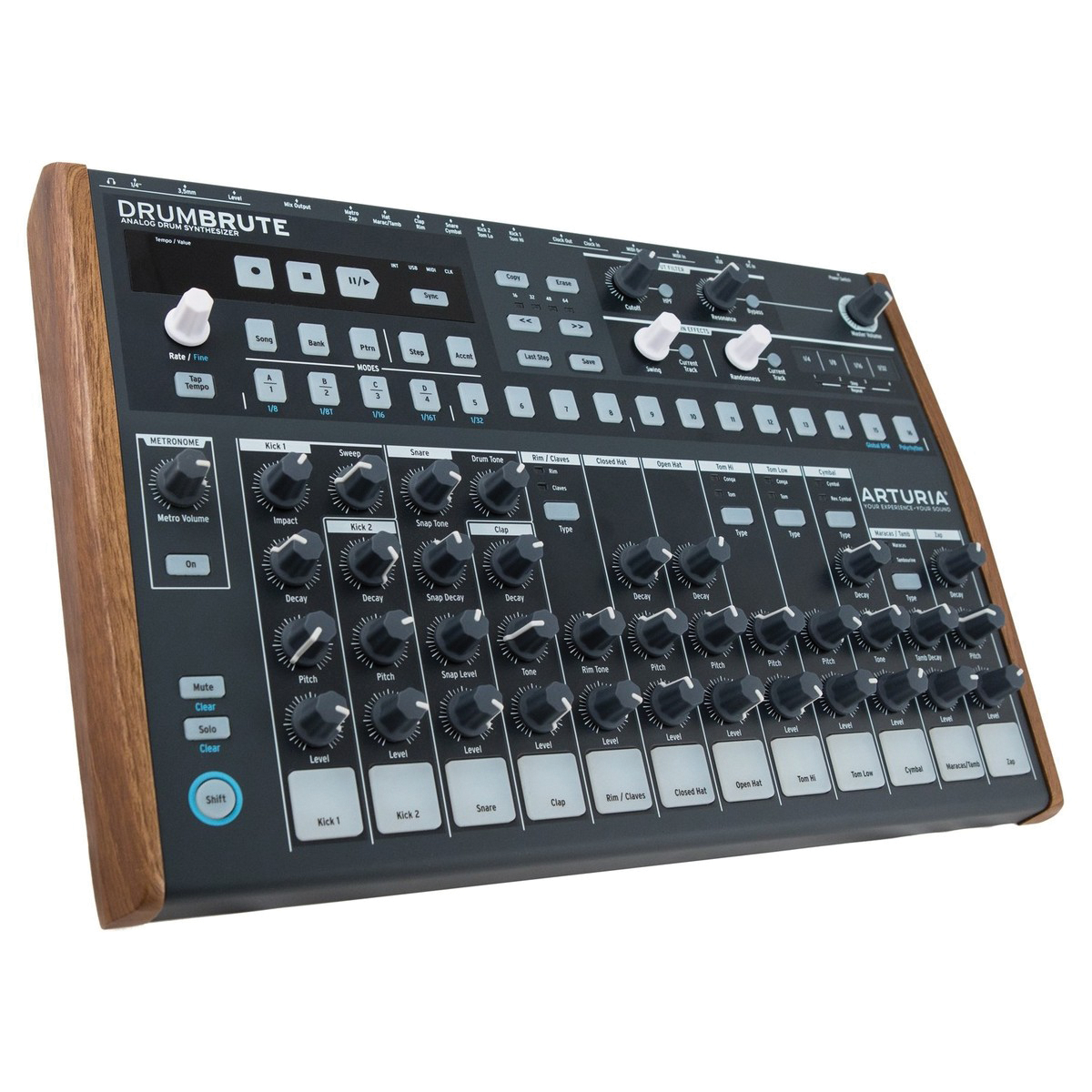 French company Arturia has been building a strong reputation over the last decade with a steady stream of well-received hardware and software offerings, kicking things off in 2003 with the Modular V, a software recreation of the famous Moog Modular synthesiser.

We’ve seen controller-based drum solutions from Arturia in the past in the form of its Spark range, but the DrumBrute is the company’s first truly standalone drum machine. Affordability is something we’ve come to expect from the Grenoble-based company over the years and, at £380 for 17 fully analogue percussion instruments in one unit, this machine certainly follows suit.

Upon taking the DrumBrute out of the box, we were impressed by the weight and overall build quality of the unit. Our eyes were drawn to the large pads at the bottom of the machine, which are satisfying to bash and pleasingly firm and springy.

The faux-wood panelling on the sides of the unit isn’t fooling anybody, but considering the low price, it’s perfectly acceptable and ties in nicely with the design of other Arturia products. Compared to its obvious competitor, the Roland TR-8, the design of the DrumBrute is more mature and classic, which was definitely a plus from our perspective.

Above the pads, you can see the sounds the unit has to offer – a seriously impressive 17 in total. Starting from the left, there are two distinctly different kicks available. The first is a punchy, aggressive 909-style kick with a strong attack, and the second is more akin to that of an 808 with a softer, rounder feel.

Both kicks can be tweaked with the usual decay and pitch controls, but the first kick can be customised more extensively with additional ‘impact’ and ‘sweep’ controls. This means you can adjust the initial hit, or transient, of the sound as well as the pitch envelope of the kick, giving you an array of options for tailoring this portion of the DrumBrute’s sound.

The snare section also allows for a similar amount of control, letting you to play with the tone of the initial ‘snap’ of the snare, its length and how loud it is. The tone of the ‘body’ of the snare sound is also tweakable, allowing you to tune it to taste. Decay and tone knobs are offered for the clap sound. Continuing across the various sounds, there are Rim/Claves, Closed Hat, Open Hat, Tom Hi, Tom Low, Cymbal, Maracas/Tamb and ‘Zap’ instruments available, all 100 per cent analogue. 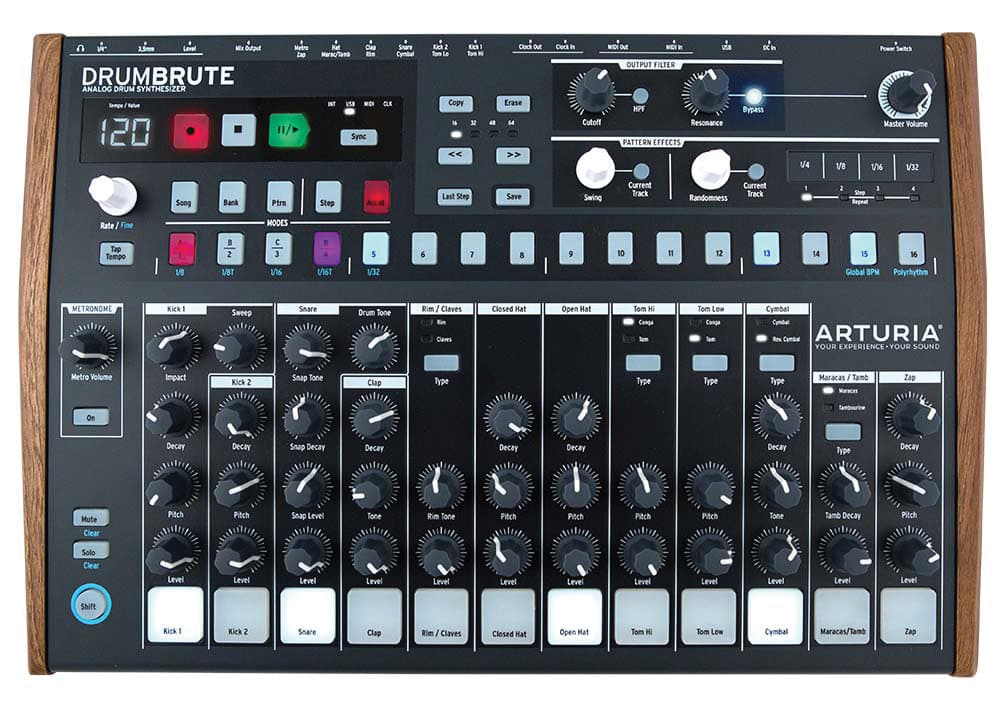 The Rim/Claves, both Toms, Cymbal and Maracas/Tamb portions each have two options available via a selectable button, which means you have two sounds per section that are both available for sequencing simultaneously. This really is an alarmingly good range of sounds from such a reasonably priced unit.

It would have been great to see the inclusion of a cowbell, but once again, we must remind ourselves of the price of this unit.

The most important thing, of course, is how the DrumBrute sounds in operation and overall, it sounds warm, snappy and certainly as ‘analogue’ as we hoped. The snares have a pleasing woody tone to them and the toms and hi-hats remind us of those from Roland’s 606, with the hi-hats sounding slightly more metallic than those of the 606. Kick number two was a favourite with us, as we found the first kick to be very aggressive at times.

However, this could be ideal for producers working in the techno genre. While some aspects of the DrumBrute are a nod towards vintage Roland units, it is certainly not an emulation of any particular machine and really does have a unique flavour once you tweak everything to your personal taste and get a pattern
keyed in.

A great addition – that appears to be a first in the analogue-drum machine world – is the reverse cymbal, which worked nicely when used to end a pattern and lead into the next. Other nice surprises are the tambourine and maracas, which are perfect for filling out a percussive pattern with some subtle energy.

Round the back of the unit, there’s the option of 12 individual outputs for the various instruments, or a single output of the whole mix. All of this goes through a high-pass/low-pass Steiner-Parker filter, which can sound anything from silky smooth to suitably aggressive, and is bypassable at the press of a button.

Once you’ve honed your drums to tonal perfection, you can either record a sequence by turning on the metronome (which you could consider a bonus 18th instrument!) and playing in your pattern with the fully velocity-sensitive pads, or you can program it manually in ‘Step’ mode.

Having 64 steps per pattern and 64 slots for patterns means that you’d have a hard time filling up the available memory, even when planning a full-length live performance. A feature of the DrumBrute that’s rarely seen in drum machines is the ability to change the pattern length for each individual instrument, thus providing the ability to create polyrhythms. For example, a kick part could be 16 steps long, while playing alongside a 12-step snare pattern, creating an evolving, varied percussion structure.

There’s also a ‘Step Repeat’ function, which lets you instantly create short loops and rolls, and the ‘Swing’ function which can be applied to globally or to individual sounds.

If you’re looking for a drum machine at the more affordable end of the market, it may be worth checking out Roland’s TR-8 Rhythm Performer (£409), which offers the best sounds and features of its classic TR-808 and TR-909 drum machines in digital form.

It now also offers the TR-09 (£369), a compact recreation of the TR-909 with a more authentic look and feel. Also, in 2015, Berlin-based MFB announced the all-analogue Tanzmaus (£439) and Tanzbär Lite (£360) which offer five and nine analogue percussion instruments respectively and two sample sections in the case of the Tanzmaus.

As anyone who creates loop-based music will know, adding small variations to a track while maintaining the overall groove helps keep your music interesting and engaging for the listener. To this end, there’s a Randomness knob on the DrumBrute which can be used to shift percussive hits forward or backwards, globally or individually.

This effect can be subtle or quite drastic, depending on how far you push it, but is a way to add a human feel to programmed grooves or to create wild, spontaneous percussion parts. 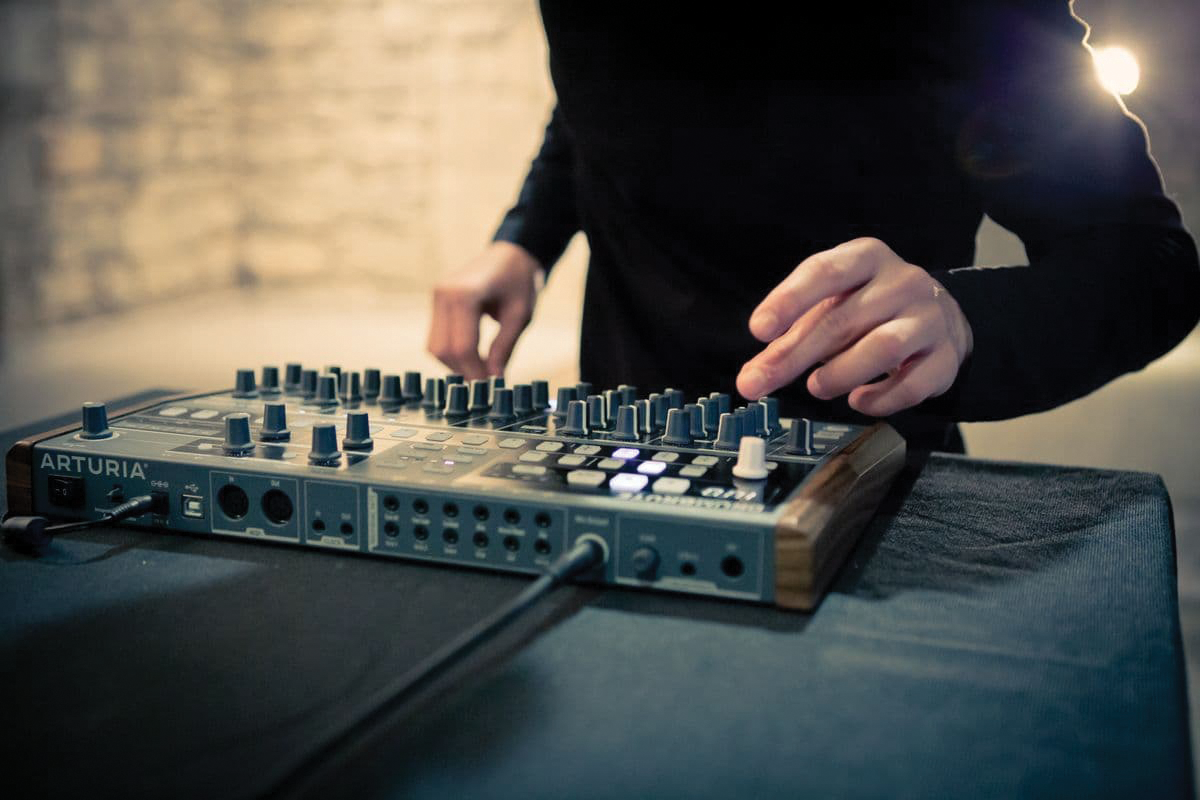 Bang for your Buck

While some of the sounds the DrumBrute offers, namely the kicks, won’t suit every genre of electronic music, it is very hard to criticise a fully-analogue drum machine with
17 sounds that costs less than £400.

It would’ve been nice to see a built-in overdrive circuit like that from Arturia’s MiniBrute and MicroBrute synthesisers to warm up the output, but such an effect could be added externally at little expense, or added during the mixing stage of production.

The DrumBrute is a lot of fun to use, and in a world where there are plenty of options for hardware emulations of classic drum machines, it is refreshing to see a more affordable machine that has a sound of its own.