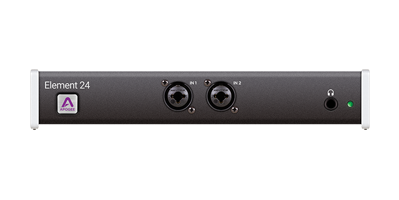 Apogee has refined audio down to its core elements. Mike Hillier tries his hand at alchemy in our review of the Element 24…

The Apogee Element 24 is an intriguing new take on audio interfacing, removing all physical controls from the interface itself and putting everything in software – with either a Mac or an iOS application, or direct from the mixer in Logic Pro X.

This seems like a very smart move –software is more easily recallable, and putting the controls at your reach from the mouse and keyboard should speed up the workflow for most small and project studio…although the lack of any physical controls at all might be sufficient to put off some of the old guard.

The unit itself is just over a half-rack width, and is thin enough to be placed on a rack shelf; but doesn’t come with any rack ears for mounting directly. Instead, it is designed as a desktop unit with two combo TRS/XLR inputs and a 1/4-inch headphone output on the front, while the back houses two XLR ports for the main analogue outputs, optical I/O, Word Clock I/O, a Thunderbolt port and a DC power socket.

And that’s it. There are no screens, no buttons and no pots whatsoever on the unit itself.

To use the Element 24, then, we had to first install Apogee’s Element Control software. This software is fairly comprehensive, with options to control each of the inputs and outputs, changing the inputs from Mic to Line, setting the gain and Phantom Power, and to create custom mixes for the headphones and main outputs.

Even with only two analogue inputs and two pairs of analogue outputs on the Element 24, this software can prove useful for zero-latency monitor mixing; but should you make use of the ADAT I/O as well, you could create a variety of custom mixes for different purposes, perhaps tying in external effects such as reverb for monitoring – all the while recording only the dry performance. This same software also scales up the Element range, for the larger Element 46 and 88 models.

An Element of Comparison

The preamps in the Element series use a two-stage design, using the first stage for low-gain settings and switching in the second stage when higher gain is required. This design allows the Element preamps to be extremely quiet, as each stage can be tuned to perform at its best over a more limited range.

Comparing the Element 24 with other mic preamps, using the line input of the Element 24 to rule out any conversion differences revealed the preamps to be very flat and neutral. The Element preamps were much cleaner than either our UA LA-610 – itself very clean for a valve preamp – or our CAPI VP28s, which had a more present midrange and began to cook the signal when driven hard.

In contrast, the Element 24 preamps stayed crystal clear all the way up until we began clipping the convertors.

Using the two preamps for a stereo recording, we used the digital control software to exactly match the gain of each input for a precise stereo image with a perfectly centred focal point. Coupled with the superbly clean preamps, we achieved a beautifully detailed classical guitar recording.

The Element 24 has a similar configuration as the Apogee Duet, at a similar price, and the Duet has greater portability and does come with physical controls built-in.

However, the Duet uses USB rather than Thunderbolt, and doesn’t have the same two-stage microphone preamps as the Element 24. Apogee are keen to stress that the Element is a step-up in sound quality from the Duet/Quartet.

The Element of Surprise

If putting everything in software isn’t for you, the Apogee Element 24 still has one trick up its sleeve. The Element Control Remote is a USB control surface, available separately, with eight configurable buttons, and a control knob.

This box has been designed specifically for the Element series in order to provide an alternative to the OS X or iOS app for control. In practice, this means that even if you enjoy the precision and ease of use the apps, it could still be a useful addition to your setup for handling simple tasks, such as setting the monitor levels, and muting inputs/outputs.

With Word Clock inputs and outputs, and the same convertor technology as Apogee’s flagship Symphony, as well as being a great standalone interface, the Element 24 could be useful as the centre of a larger setup – with additional external interfaces clocked from the Element 24, at up to 192kHz.

With only two of its own preamps, however, the Element 24 is limited to smaller setups unless it’s used with external ADAT interfaces, which would be enough to convince us to consider the step up to one of the larger interfaces in the Element range. 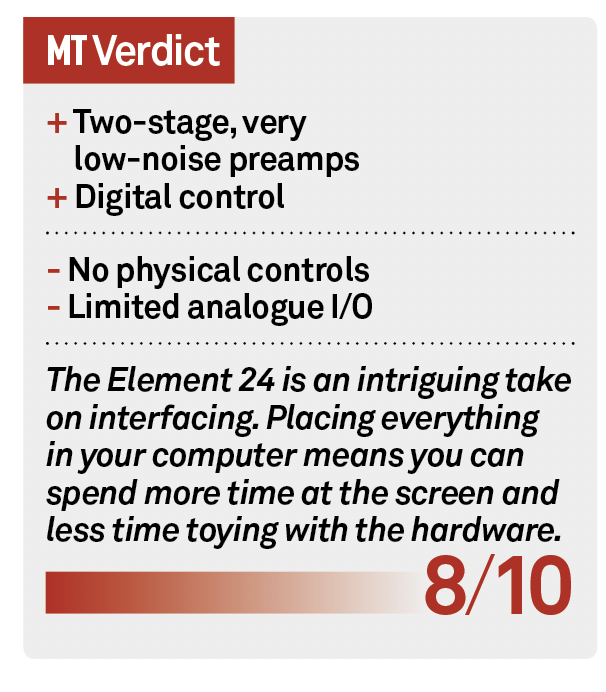