The battle for top iOS DAW is hotting up. Korg’s Gadget wears the crown at the moment, but Ampify’s Groovebox may just be a challenger, thinks Andy Jones… 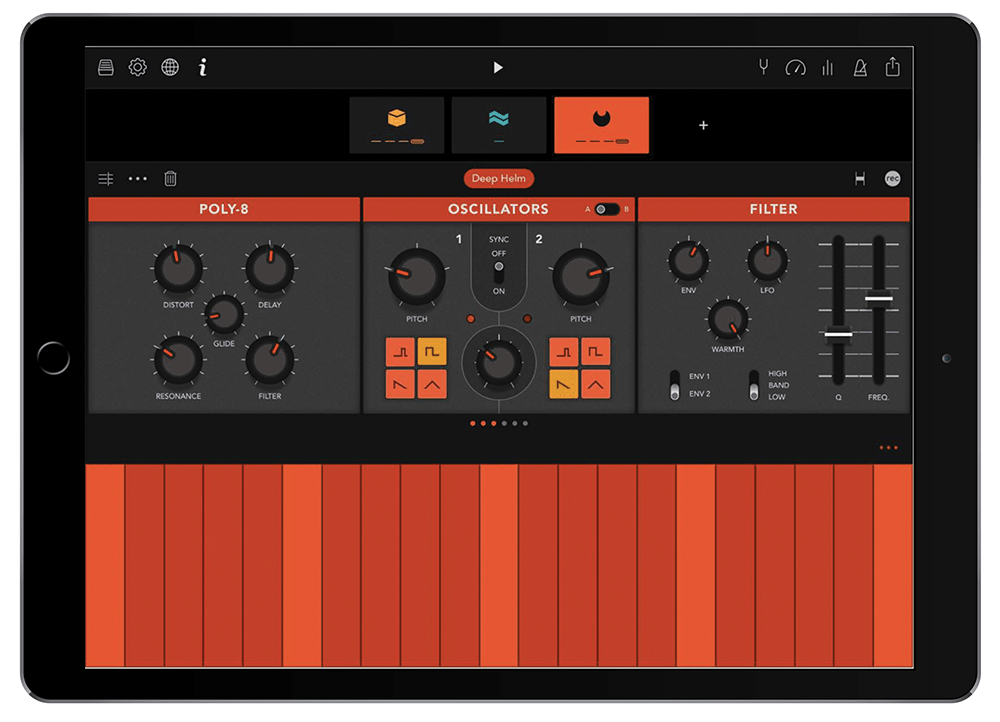 The iPad and iPhone were supposed to usher in a new dawn of music making, but it’s certainly taken long enough for that dream to come true. Yes, there were some fabulous early apps and synths – Auria, the Arturia and Korg suites and GarageBand, naturally – but the whole experience was, for me anyway, quite sterile and the lack of any tactile feedback meant I never jumped over to using an iOS device as my sole music maker. 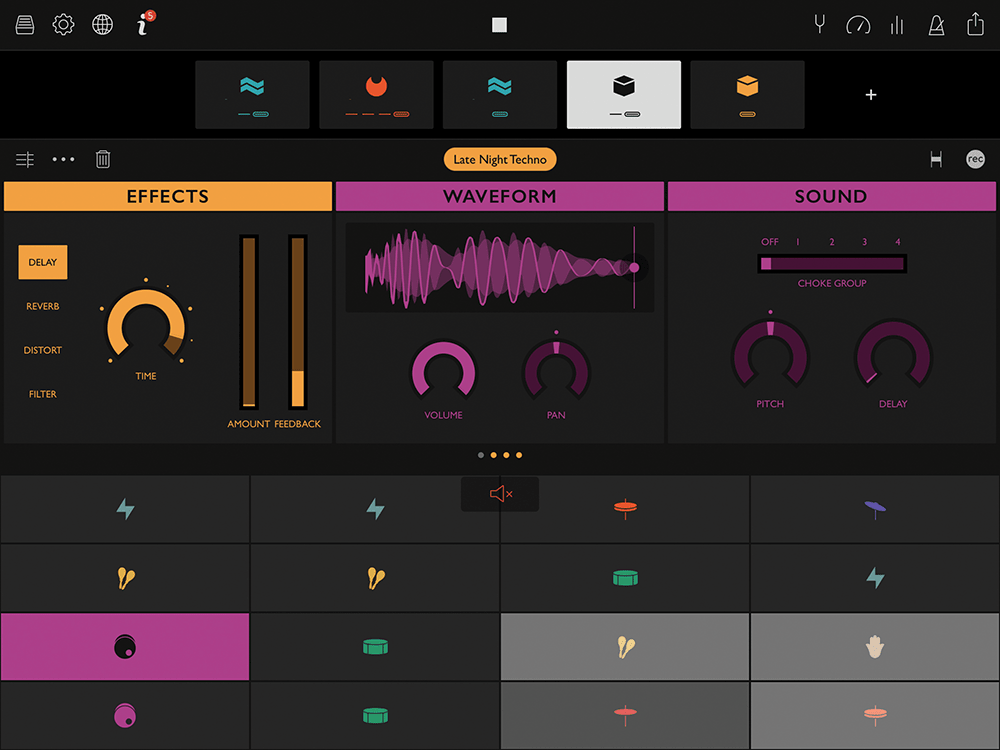 But then Korg’s Gadget arrived. It was the first all-in-one DAW that I found myself using to produce complete tunes in minutes, plus it was an app that allowed me to transfer ideas I had out and about to my desktop setup with relative ease. It became another ‘go to’ DAW, but the only one that I would use on iOS (aside from Cubase, occasionally).

Other companies are catching up now, though. UVI’s BeatHawk is one that I’ve recently tested and is one that comes relatively close. And among a slew of others, Ampify’s new Groovebox app, on test here, looks like a standout all-in-one proposition, so let’s take a closer look.

First up, despite this probably being the first time you’ll have heard of them, Ampify is not a new company. Ampify is the new company name for Blocs, who produced the rather nifty Wave last year; itself another app that does all-in-one music production, but in a rather unusual way. Groovebox is more conventional in many respects, but it’s not too much like a hardware groovebox in the same way as, say, Novation’s Circuit is. And I mention Circuit purely because Ampify is an offshoot of Novation – the ‘app’ division, if you like – so there’s heritage and knowledge of groove production here, and it certainly shows.

The idea for making a tune is based around choosing instruments – currently a synth called Poly-8 (and yes, it does look a bit Roland); a bass synth called Retrobass and a drum machine called Drumbox. You can choose any number of these depending on your iOS device’s power – see specs below. Choose a device and you are pretty much straight into a song, with riffed loops playing different preset sounds. You can change the preset sound (choose from 19 on the Poly-8, 20 on Retrobass, or from four kits in Drumbox). 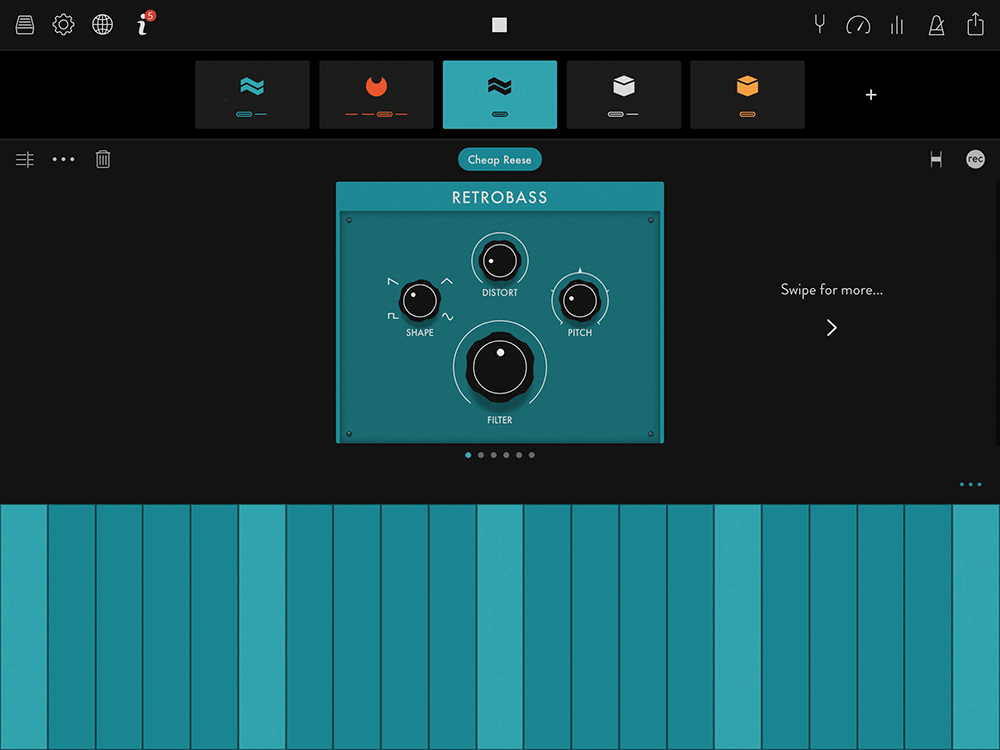 These initial patterns are for inspiration only, and do demo the particular sound. You can’t, as yet, load them in and edit their notes, which is a shame, as some of them really are rather good and I’d have liked to load them in, get them to trigger other sounds and then call them my own – nick them, in other words. Ampify is looking into a MIDI Out option which could allow this (in a roundabout way) and has just introduced MIDI In as I write this.

So you have your chosen sound by this route and, once selected, a keyboard appears which is definable by scale from a drop-down menu on the top right. In order to produce a track, it’s simply a matter of defining the number of bars you want a riff to cycle around, recording notes, changing sounds if you want, loading more instruments in and building your tune up. It’s very intuitive and slightly addictive.

As for the sounds themselves, as you may have guessed from the name and gathered from the instruments that I’ve mentioned, we are talking dance-based and electronic. There’s great variation, though: everything from really dirty basses to ultra-clean and glimmering leads. We’re not talking that many, but most of your basses (and leads!) are covered.

There’s also a certain amount that you can do with each, in terms of sonic editing. For each instrument, you get a Distortion and Filter control and for the Poly-8, there’s an additional Resonance, Delay and Glide rotary; for the Retrobass, its extras are Shape and Pitch controls.

For the drums, there are lots of great electronic and acoustic sounds, plus Urban and Industrial kits, but it’s what you can do with them that counts.

There’s a 16-pad, MPC-style input area and four different sections to edit: Drumbox lets you alter the overall length, pitch and filter; Effects offers four types, plus level and feedback; Waveform offers the ability to alter the sample length and pan; and Sound lets you change parameters, such as note pitch and delay.

There are a lot of editing possibilities in this section; it’s by far the most fully featured one on offer. Note editing is also not only possible, but pretty straightforward.

You flip the screen into edit mode with an option top left and then your notes are shown on a grid. You can edit note length by dragging their ends; select groups of notes; drag notes and more within the editor and also move the whole screen to cover more bars or higher or lower octaves – literally, the whole screen moves left, right, up or down as you do this.

Those hoping to pinch to make the screen smaller to see great ranges of octaves and bars will be disappointed, as this hasn’t been implemented yet. Also, once you move the screen in this fashion, your actual note editing can be a little hit and miss – you might be trying to edit a note length and move the screen, for example. 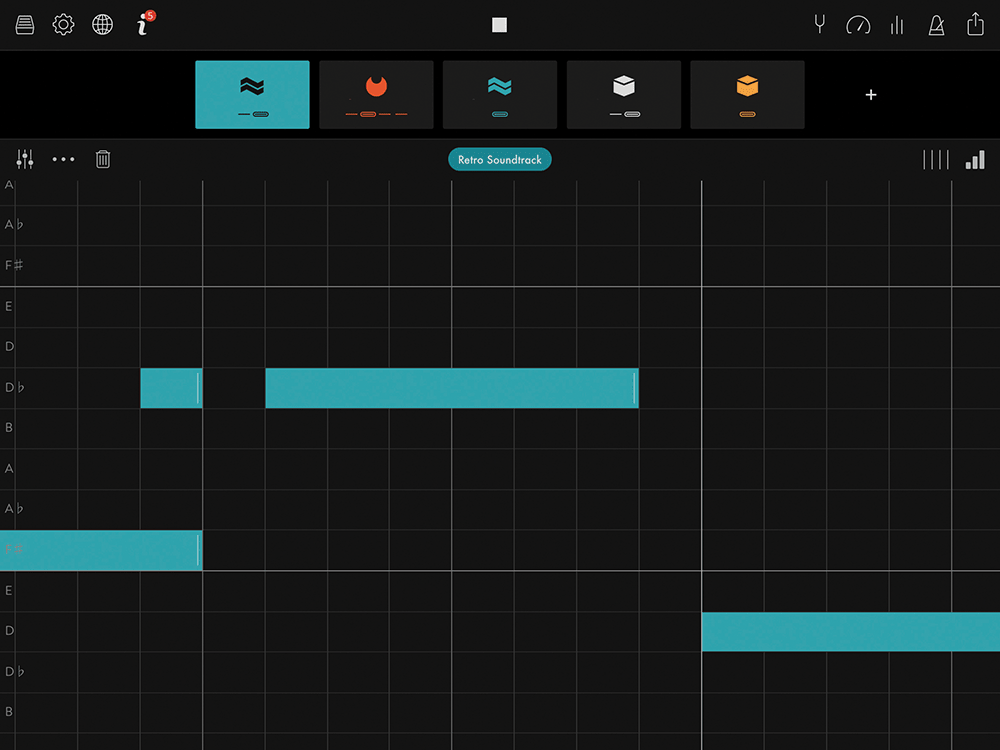 In the unlikely event that you only have an iOS device for music making and don’t have an all-in-one music maker, then this is a great option. Like all apps, it’s not an essential purchase – but at the price, it’s a very attractive one.

This might be a niggle, but what’s great about Groovebox is that you can get a song going very quickly and very easily, which is entirely what the app is about. And what is also good is that it’s your tune, your notes, and your ideas. You can use those suggested patterns for initial inspiration, but it’s just as easy to get your own notes and ideas down.

Some other features worth noting as you do this include a very cool-looking mixer for whatever parts you have created; an easy way to change the grid definition (with Normal, Narrow, Triplets and Narrow Triplets options); plus controls for key, tempo and metronome. All of your efforts can obviously be saved, too.

Finally, a note on the in-app purchases. For drums, at present, there are Worldwide Hip Hop, Trap Overload and Hard Hitters options offering sounds, kits and patterns for a not unreasonable £1.99 each.

For the synths, it’s a little more cynical (synthical?), as you have to buy more controls for your synth. So £4.99 will unlock a bank of LFO, oscillators and other controls for the Retrobass synth.

I think these should really be on offer from the off and not an option, or you should be provided with at least one synth that has everything, just so you can see and hear what kind of extra power you’re buying with the others. Yes, it is only £4.99 to start with, but it would have been nice to give you the complete instrument and maybe just more sound-bank options.

Groovebox is a lovely app and cheap when you start. You’ll have tunes going within seconds and, more importantly, these need not be led by patterns – you can create from scratch. I’m disappointed that you don’t get full synth controls to start with, but what you do get is great – and there are certainly enough controls to manipulate your sounds from the off to create some very varied new ideas.

With sounds and upgrades released almost weekly, Groovebox looks set to expand rapidly into a real mobile all-in-one and all-you-need contender. Though it’s not ready to replace your desktop experience yet, nor is it intended to, but it’s great for realising ideas and inspiring new ones… 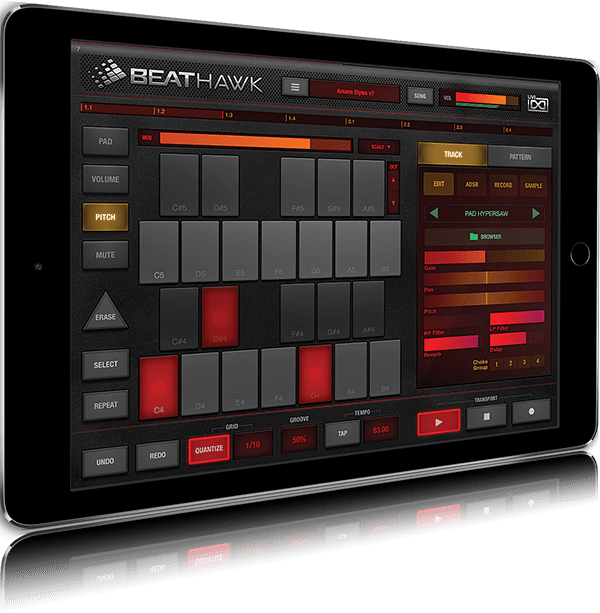 Of the many all-in-one apps I’ve recently looked at, UVI’s BeatHawk is most similar in concept, in that you don’t pay much up front (£9.99), but then customise it with a sound packs tailored to your musical style (for an overview, see our Essential Guide).

Korg’s Gadget comes complete with a mountain of instruments to start with, so you can’t tailor it, but thankfully, they are all great – as is the environment. There are in-app purchases, but they’re less needed and in your face, so this still has the edge for me.