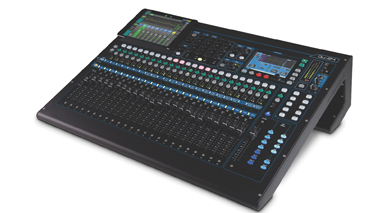 Following on from the Qu-16, Allen & Heath has expanded the range with the Qu-24. Mike Hillier steps up.

We recently took a look at Allen & Heath’s Qu-16 mixer and were very impressed with the sound, features and workflow of the console. Following quickly in the Qu-16’s footsteps is the new Qu-24

The layout on the top panel is similar to the Qu-16, with the same 800×480 touchscreen and the ‘SuperStrip’ section providing access to all the main parameters for the active channel with one knob for each parameter. However, the Qu-24 has

not been constrained by the decision to fit the console into a 19” rack like the Qu-24, so there is a little more room on the top panel and Allen & Heath has even included a blank space with a small lip, which could be used for storing notes or an iPad running the Qu-Pad control software.

The similarity in design makes it very easy for anyone who has used the Qu-16 to quickly move up to a Qu-24 and get working with no need to learn new skills. The SuperStrip is well laid out with plenty of space between the knobs, so there’s little to no risk of accidentally knocking the wrong knob. The well lit on/off buttons showing which parts of the strip are in use on the active channel make it very easy to use, even in a dark environment without a lamp – although, it becomes impossible to read any of the markings on the panel, so unless you already know what every knob does we’d suggest you get a lamp. Thankfully the Qu-24 already has a dedicated 4-pin XLR lamp socket on the rear, ready for use with compatible gooseneck lamps.

Working Fast
Once you’re into a live mix, the SuperStrip approach to the built-in effects is a great and really fast way of working, enabling you to quickly set the gain, pan, high-pass filter cut-off, EQ, and compression- and gate-thresholds. You can make quick adjustments on the fly, but for power-users this will be quite limiting – especially on the compressor and gate sections. To delve deeper one has to use the touchscreen and the single multi-function rotary encoder. This encoder will automatically take control of whatever function has been targeted with the touchscreen.

So to change the compression ratio, you first select the channel you want to alter, then on the touchscreen select the compressor and highlight the ratio, giving control to the encoder. To change the attack and release, push on the attack and release parameters on the screen and the multi-function encoder switches to those. Switch to the gate attack by selecting the gate on the touchscreen and then the attack parameter. This can be a little slow and fiddly to set up, but once you’ve got everything how you want it, the only parameter you’ll likely want to alter again will be the threshold, which is always accessible from the SuperStrip. If you compare this to having to work with dozens of racks of outboard gear, remembering where each channel is patched in, it is simpler and faster.

Their are four different compressor modes built into the compressor module. The first two are manual modes: Manual Peak and Manual RMS. Manual Peak responds to transients which cross the threshold and can be used in a similar fashion to a brickwall limiter when set with a high ratio and fast attack and release settings. Manual RMS responds to the average level and is more useful as a moderate channel compressor. The Manual RMS is the default compressor on each channel.

Effects Options
The FX engine in the Qu-24 has four slots where you can place send effects. There are a wide range of effects to choose from for each slot, including a variety of reverbs, delays and modulation effects. The effects themselves sound fantastic, with plenty of options for manipulation and there is even a graphic EQ after each one on the channel return for tuning your effects. However, setting up the effects can get a little tricky as you must first switch the faders from controlling the level going to the LR Master buss to the FX buss. This will bring all the faders down and you can now use the faders as Send controls going to the FX buss.

You must then turn up the Master fader for this FX buss, which controls the overall FX send, and then switch the faders to show the second layer to turn up the FX return. Staying on top of all of this can be quite time-consuming, making it awkward to quickly mute the effects at the end of a song while the artist talks to the crowd.

Alternatively, you can patch some effects to a specific channel, avoiding the whole Send set up scenario, or you can patch an effect as a direct insert, but neither of these provides a good solution to muting effects between songs. A master FX Mute switch would be a much better solution.

To get around this limitation the Qu-24 has four Mute groups to which any channel, effects send or return or stereo group can be assigned. Muting the group is then done from the Home screen using the touchscreen. However, in practice, we never leave the Qu-24 on the Home screen and so this process would still involve several button presses. Instead we assigned the first four SoftKeys to the four Mute Groups, creating four instant Mute buttons on the front panel, with all our FX Sends assigned to the first Mute Group.

Stuck In The Box
One of the flaws in the design of the Qu-24, like the Qu-16, is the lack of analogue insert points. The built-in effects engine replace the need for insert points, and on the smaller Qu-16 we would see that as a logical assumption, but on the larger Qu-24 it’s a notable oversight. And owners with an existing investment in outboard hardware won’t necessarily want to replace it all with the built-in digital effects engine, no matter how good it is. Outboard send effects can be used by using up one or more of the 10 mix outs, but it would be nice to place your own EQ and compression across an insert.

Other than this, though, the Qu-24 is an incredible desk and one we hope find its way into small- to medium-sized venues. It’s not as intuitive as an analogue console, but all the extra features and the fairly fast learning curve mean that it will be a huge improvement in the sonic quality of performances in these sized venues over much of the competition. 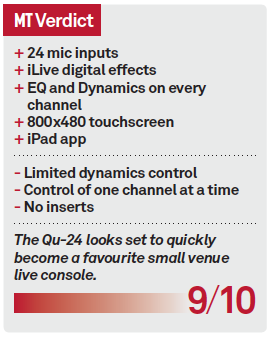