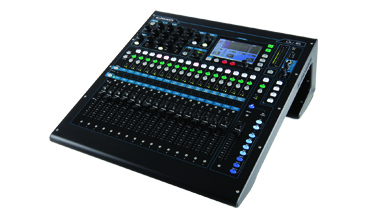 Allen & Heath compresses some of the technology from the iLive series into a smaller format. Mike Hillier explores the Qu-16… 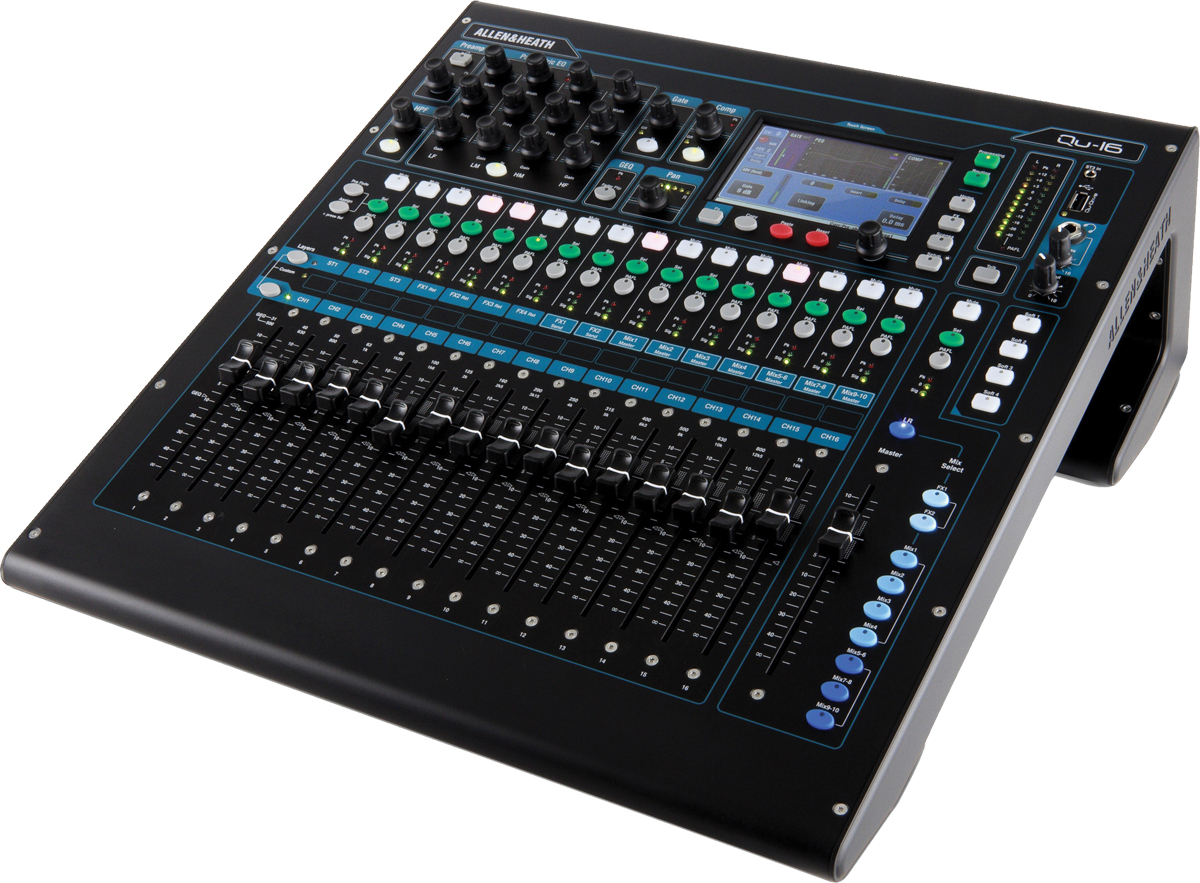 On paper, the Qu-16 is an impressive beast. Taking digital technology from the iLive series, the Qu-16 may be small but it packs quite a punch. It fits in a 19-inch rack-mountable chassis but it is stacked with 16 mono input channels, each with both line-level TRS and mic-level XLR inputs feeding recallable AnaLOGIQ preamps. Each channel has a motorised fader and there are two stereo TRS pairs on the rear panel and a single stereo 1/8-inch TRS input on the front for an additional six input channels. Mixers aren’t required to lose a channel for talkback, either, as a dedicated talkback input is included at the rear.

However, there are no hardware inserts, either on the individual channels or on the mix buss. Instead, each input channel is equipped with a high-pass filter (sweepable from 20Hz–2kHz), four-band parametric equaliser, compressor, gate and delay (up to 85ms and intended for signal alignment rather than as an echo effect). The master channel has its own four-band parametric EQ, 28-band graphic EQ, compressor and delay (up to 170ms). Furthermore, there are 16 internal busses and four stereo FX engines with their own dedicated return channels.

The Qu-16 is equally well equipped in terms of outputs, having no fewer than 12 XLR outs located at the rear in addition to two TRS Alt outputs and two TRS 2Track outputs. It also has AES digital outputs and can connect to a USB drive or Mac/PC for streaming or recording audio.

All Hands on Desk
The Qu-16 is intuitively laid-out, with dedicated controls for many of the most important functions and a touchscreen for navigating the additional functions. We took it along to a rehearsal and while it isn’t quite as quick to get up and running as a simple analogue desk – adjusting even something as simple as gain on each channel involves selecting channels as you adjust each gain knob individually – it does have the advantage of being able to store your settings for later recall. This offers a huge advantage for touring engineers or bands working on their own rig, who can store and recall their settings from a previous night, enabling soundcheck to go quickly, with just a few alterations (especially once the room has been EQ’ed with the master channel 28-band graphic EQ). 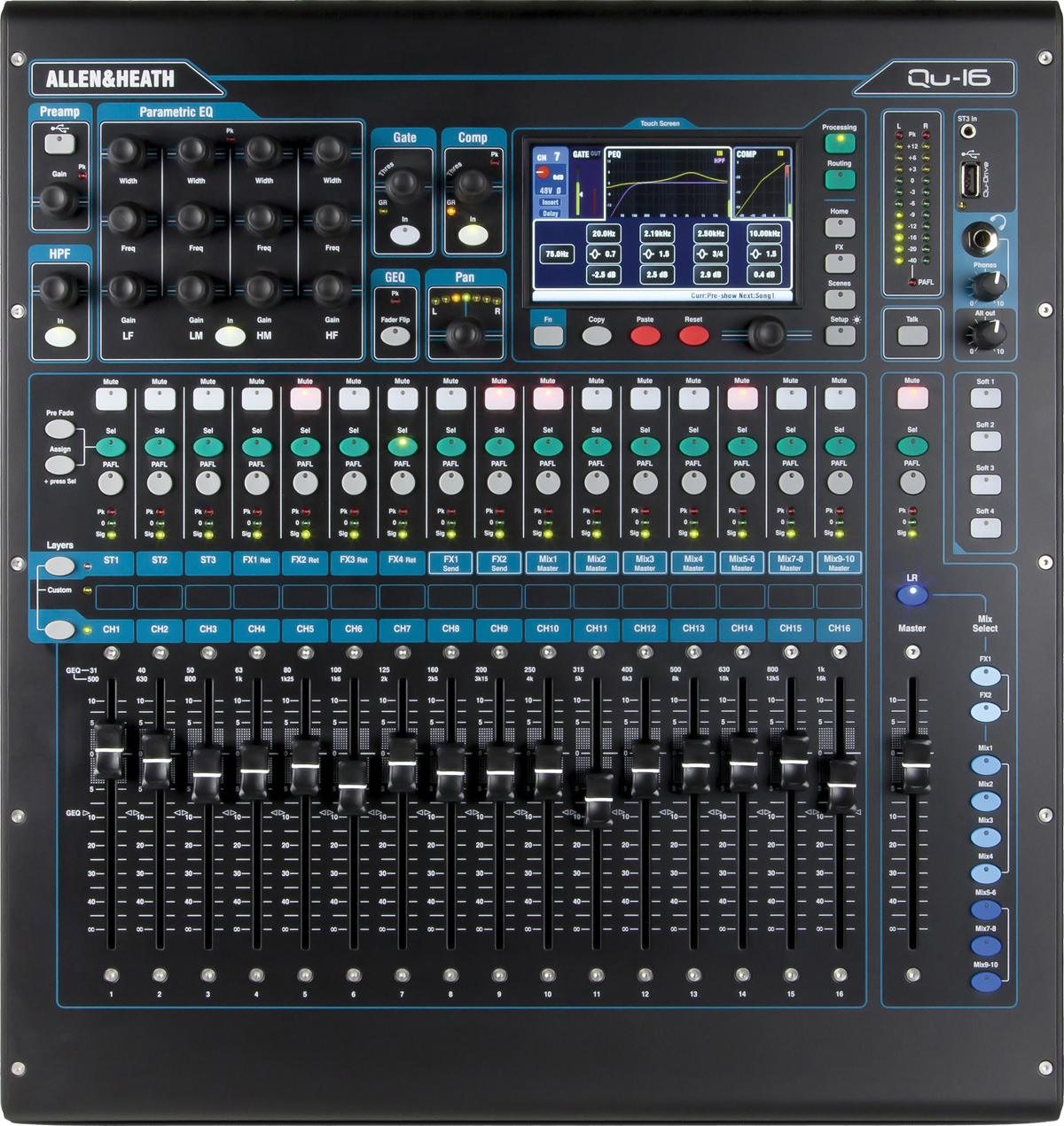 Taking digital technology and features from the iLive series, the Qu-16 may be diminutive in size but it still packs quite a punch

The other obvious advantage of recall in a live console is that you can soundcheck the headline act first, save all your settings and then soundcheck the support act, knowing that you can change any parameter on any channel as it will have been saved. In our opinion, these advantages more than compensate for the omission of dedicated knobs for every parameter on every channel.

Once we had all the channels line-checked and set a basic gain structure, we started EQ’ing and compressing to taste. It has become standard on digital desks to include as few controls as possible to keep down costs, with many desks offering only four rotary controls that cover all the duties from EQ to compression and pan, so it’s encouraging to see that Allen & Heath hasn’t skimped here and has given dedicated controllers to each of these controls, enabling you to control both EQ and compression simultaneously should you wish to. 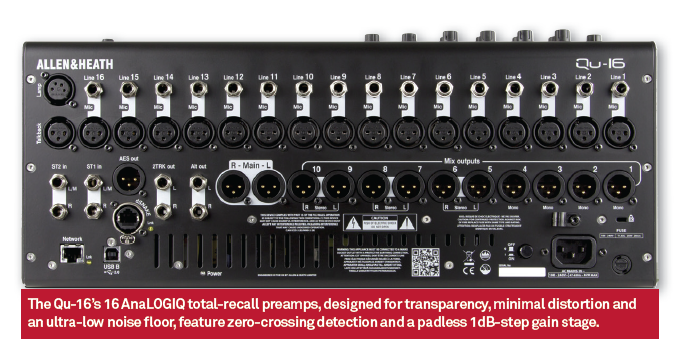 However, you are still stuck with being able to work with only one channel at a time – unlike on analogue consoles, which provide controls for every function on every channel. This means it isn’t possible, for example, to EQ the kick and bass guitar against each other, ducking one while boosting another at the same time. However, the EQ section of the desk has 12 knobs controlling gain, Q and frequency of each of the four bands alongside an on/off button. The high-pass filter is controlled from a separate section via a single dedicated knob and its own on/off button, making it incredibly easy to quickly set this up on each channel.

The 800 x 400-pixel touchscreen displays the EQ curve as you adjust it, and you can quickly flick back and forth between channels, seeing at a glance the settings being applied to each channel. The channel currently active is displayed in the top-left of the screen, and it is worth keeping a careful eye on this as it’s all too easy – in our experience at least – to EQ a channel, wrongly thinking you’re working on another channel entirely.

As with the high-pass filter, the gate and compressor each has their own rotary encoder and on/off switch, which makes it simple to set up dynamics on each channel, with the actual settings again being displayed on the touchscreen. We’d have liked to have seen a little more attention given to the dynamics section – a single knob controlling ‘more’ or ‘less’ might make setting compression nice and easy, but it doesn’t provide more experienced engineers with the control they might want. This wouldn’t be so bad were the Qu-16 to have hardware Inserts, as then you could at least insert the dynamics processor of your choice, but since it doesn’t we’d like to see more powerful dynamics options.

Like the EQ and HPF, the two dynamics have their own on/off switches. The switches are all fitted with small LEDs that display whether the module is on or off, enabling you to see at a glance which EQ or dynamics modules are in use for each channel as you move through the channels. The Pan module is similar, but in this case employs seven LEDs to display where the pan parameter is currently set for each channel.

Ahead of the Curve
Once we’d got it set up, working the mix was a piece of cake. As well as the insert effects, the Qu-16 has four iLive FX engines comprising reverbs, delays and modulation effects. The effects have dedicated returns, so you don’t have to tie up your input channels, and each return has a four-band parametric EQ, giving you the opportunity to tune your effect exactly as you’d like it.

The SMR Live algorithmic reverb was a favourite of ours, providing a variety of room and plate emulations via a clean and easy-to-use interface. However, unlike many other desk effects, since the Qu-16 has a touchscreen you aren’t limited to only a few parameters, meaning with the SMR Live as well as the six basic parameters, more advanced users can jump into Expert mode and get to grips with a selection of 17 more advanced parameters.

Having four dedicated engines, each returning on their own dedicated channels, meant we were able to set up dedicated reverbs, delays, vocal doubles and then ride each of these during the mix. Furthermore, Allen & Heath has said that the list of effects may grow with future firmware updates.

The Best of Digital
A USB port on the Qu-16 enables you to attach the console to a PC or Mac for recording; alternatively, you can attach a USB drive and record directly to that. The Qu-16 can record up to 18 channels at 24-bit/48kHz – enough to record all 16 inputs and the stereo mix buss. This is a great feature, and one we can see making this desk incredibly popular, both in venues and in project studios.

Where things get really interesting for project studio owners is that you can assign MIDI to each fader, enabling you to control them from channels in your DAW. This makes for a great hybrid mixing environment: making the most of the desk, the built-in effects and the flexibility of a DAW. This can be done using the class-compliant USB MIDI drivers or the Ethernet port.

No digital live console is complete without an iPad app and the Qu-16 is no exception, though there’s no Android version. Allen & Heath has developed the Qu-Pad app for the Qu-16. This app (free from the iTunes Store) provides wireless remote mixing from an iPad, which can be used to create a monitor mix while onstage or to adjust the EQ while walking around the venue. The Qu-16 does not, however, have a built-in wireless receiver, so to set up the Qu-Pad app you must connect a Wi-Fi router to the Qu-16’s network port.

For the Qu-16, Allen & Heath has pulled together the best features from its GLD and iLive series (which the Qu-16 will integrate happily with via dSNAKE) and created an exceptional small-format desk. 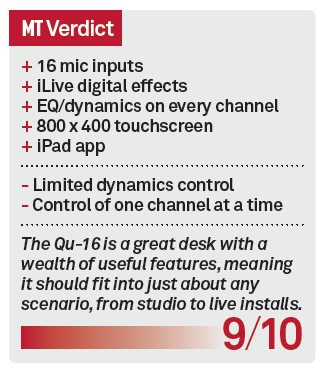