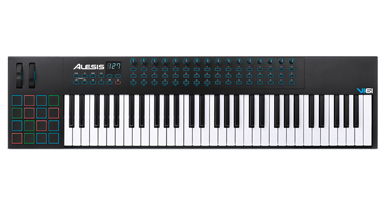 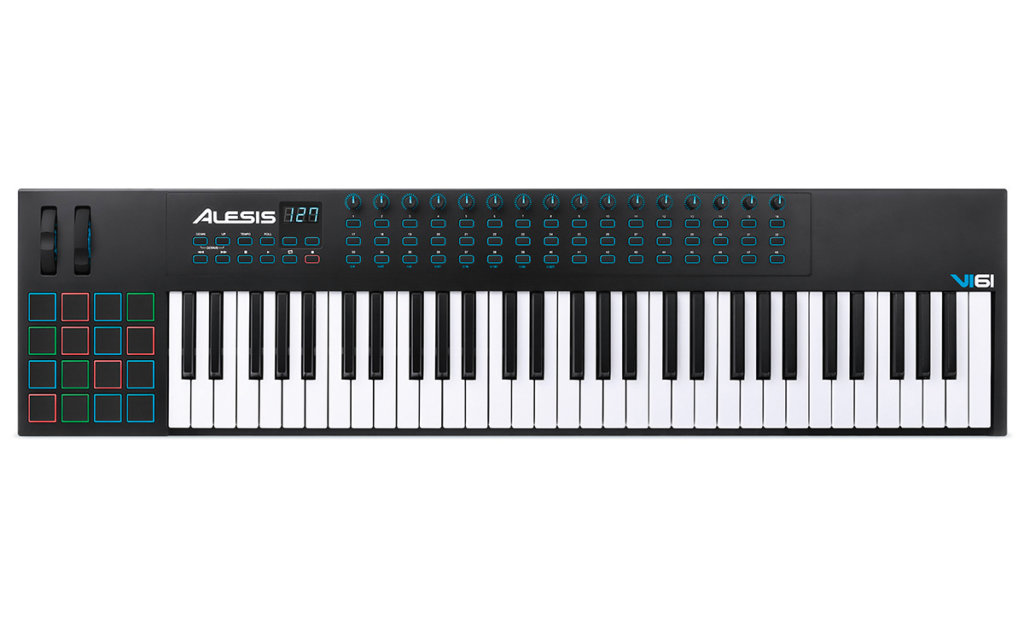 It might have taken the best part of nine months to get through, but we’re finally getting our hands on the huge number of products announced by Akai, Alesis and Numark (all under the InMusic brand) back at Frankfurt 2014. Hence, the seeming glut of products by them recently on MusicTech.net. 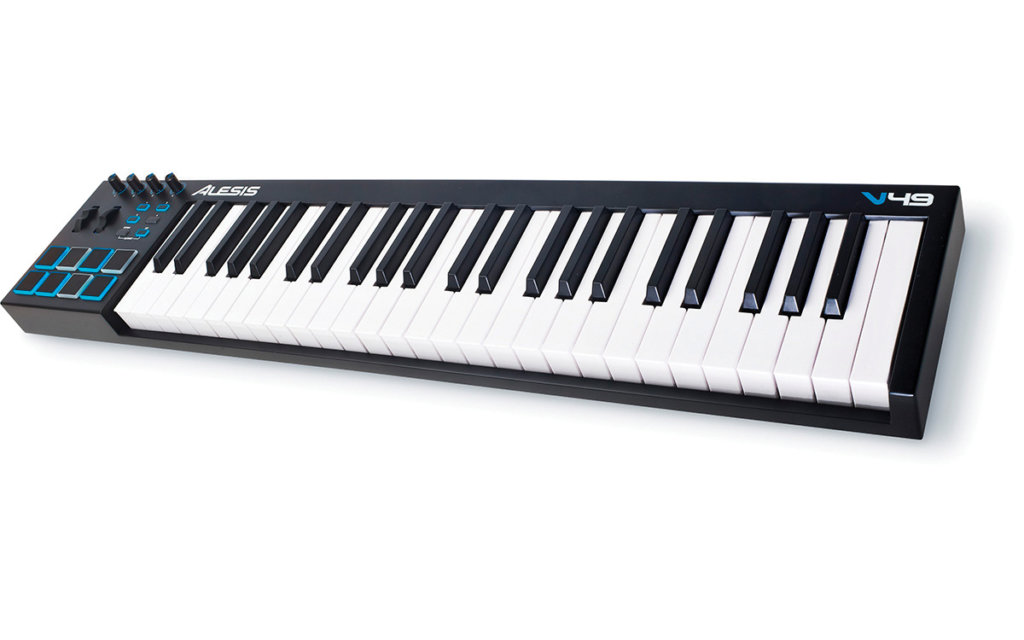 We’ve seen DJ gear, interfaces (aplenty), controllers and clip launchers so these – on the face of it – fairly standard sets of keyboards could have been lost in the rush. But the V and VI ranges of USB controllers have a lot going for them, so we’ve grabbed one from each range to put them through their paces…

As Usual…
Controller keyboards tend to get released in groups of three these days: starting with an entry level, compact 25-note; then a mid range 49-key and then a players’ 61-note. If the range proves successful or if it is deemed to be more for the ‘proper’ player, an 88-note fully-weighted keyboard may follow in due course.

We haven’t got that yet with both of these new Alesis ranges, but everything else is present and correct. As well as all three models in keyboard hardware you get a good, if not excessive bundle of software with each model that includes Ableton Live Lite and Expand!2, the former offering the recording environment and the latter the sounds with which to enable music making from the off.

The keyboards will, of course, fully integrate with your existing software too. To help set up your various MIDI parameters, both ranges come with V Editor software. We tried the VI61 version for Mac and it’s dead simple to use as you get the keyboard mapped out on screen with each section – keyboard, pads, rotaries, switches etc – all easily editable on screen, using the cursors to step through groups of each.

We’d have liked a simple preset to set your DAW up but everything is easily accessible with features such as Roll Mode which brings more performance functionality to the pads. Now it’s time to have a look at each range in more detail.

The V Range
This range offers similar specs, throughout, the only real difference being the number of keys, all of which are velocity sensitive, full-sized ‘square front’ keys. You also get four rotaries; eight drum pads and four buttons, all of which are assignable.

Pads and controls are well lit on power up. The eight pads light up in blue and are particularly responsive, as are the buttons. The dials are not too loose nor tight offering a smooth and non-continuous action. Both pitch and mod wheels are small but have a good quality making accurate pitch and other parameter control easy.

The main keyboards punch well above their price point. They’re not weighted but are surprisingly responsive and with plenty of sharp action to get some dynamics going in your playing. They certainly have something about them that you’ll rarely if ever find at this price point. 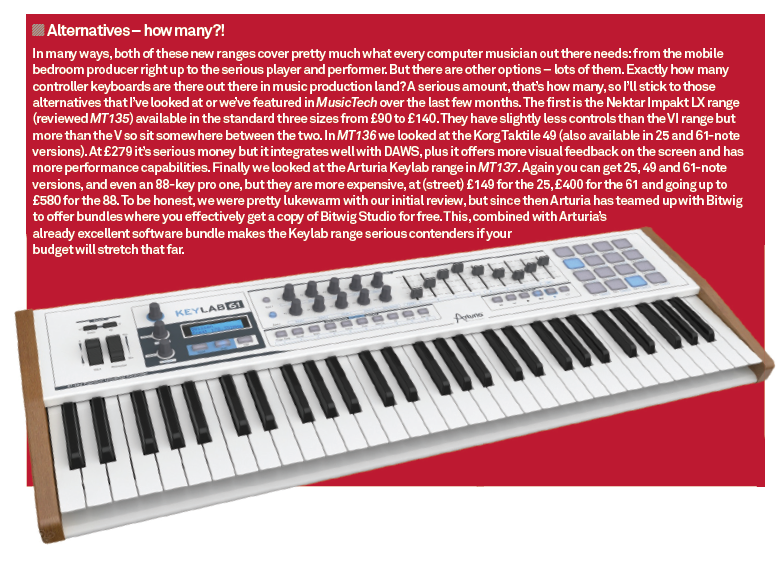 Looks-wise – and this is important as you’ll use a controller for many years hopefully (not just for Christmas!) – they’re practical rather than overly stylish. With more basic numbers of assignable controls, all three keyboards require less surface area so lack depth but this could be a good thing in any compact situation. Certainly I find I’m constantly moving my controller around, especially with a laptop as my main core processor and these are light enough to do just that. Their lack of depth means they slot in pretty much anywhere. Even placing them in front of said laptop (rather than to the side) wasn’t too disruptive.

The smaller of the three is obviously well suited to the most compact of set ups – and being buss-powered they’ll all work in mobile situations. But I’d recommend going for either of the larger ones, because the keyboards are so good at this price point, so you might find yourself playing that bit more. Even though we only had the 49-note to test, we can see the 61-note really succeeding in this capacity as a player’s choice, for almost silly money.

The VI range
The ‘VI’ range of keyboards really takes things up a notch with a big range of additional controllers and rotaries. On each of the models you get 16 backlit drum pads (doubling those on the V range) and 8/12/16 assignable rotaries (as you go up the 25, 49 and 61-note keyboards in the range). The number of assignable buttons also increases as you increase keyboard size: from 24 on the smallest to 48 on the largest 61VI (on test here).

The keyboards too go up a notch, from velocity sensitive to semi-weighted with aftertouch. In practice the keyboard on the tested 61-note is great for the money – perhaps a little springy if you are used to the real thing but certainly very expressive at this price point.

The keyboards light up in a pleasing way as if to say, ‘look at all these controls’ – and there certainly are a serious amount of options available to keep anyone who uses plug-ins happy. The pads this time light up with multi colours. There’s also a set of DAW transport controls for some added extra software control. Again, the keyboard is buss-powered so you have that mobile option if need be, but you also get an additional MIDI Outplus external PSU socket (although no power supply was supplied with our test model).

One other notable point on the 61-note VI is that the pitch and mod wheels are bigger and more sturdy giving them a ‘pro’ feel although the mod wheel might seem stiff to some.

In all the VI range is aimed more at the intermediate to serious player, as the keyboards within it truly open up your software’s parameters to the outside world allowing pretty much total control over as much of your software as you want.

The VI61 on test has a serious amount of control options and even though we didn’t have the smaller ones on test we think this one represents the greatest value as it’s not even twice the price of its V-range cousin.

V for Victory?
In terms of bang for your buck, we can thoroughly recommend both ranges. The V25 and 49 in particular are fully-featured, mobile keyboards that you could take on the road and properly play and control, and are ideally suited to the budget musician.

And on this point, Alesis has pretty much nailed the prices for both ranges – although, for me, the VI represents the greatest value. Sure the good keyboard action of the V range for this kind of money is very welcome, and if you’re short of cash then this range is an attractive proposition.

Yet with the VI range you get a lot more than double the features, and an even better keyboard action. So in that respect we’d have to recommend this range overall, especially as the cash outlay isn’t that much extra. The VI61 – the best keyboard across both ranges – is a particularly good steal at £179.
So it’s a V for “very good” but a VI if you’ve got the cash. In fact, opt for a smaller VI if you’re faced with a cash vs size quandary. You’ll thank us in the long run just for the extra features that you’ll grow in to down the line. 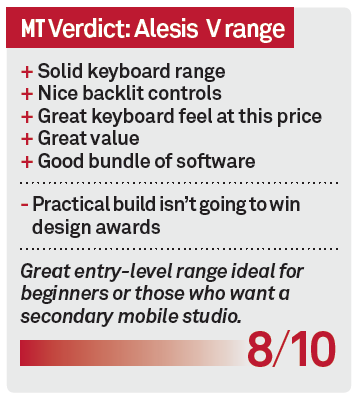 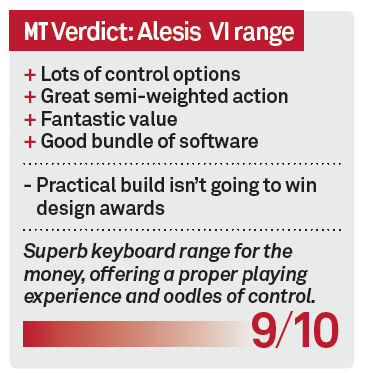