Andy Jones continues his review of the Akai Advance Series, let’s have a look at a top down overview of the 49… 1: The Screen The 4.3in screen is a key feature of the Advance series. It’s full colour, clear and graphically capable of showing pretty much everything on your computer screen including the GUI […] 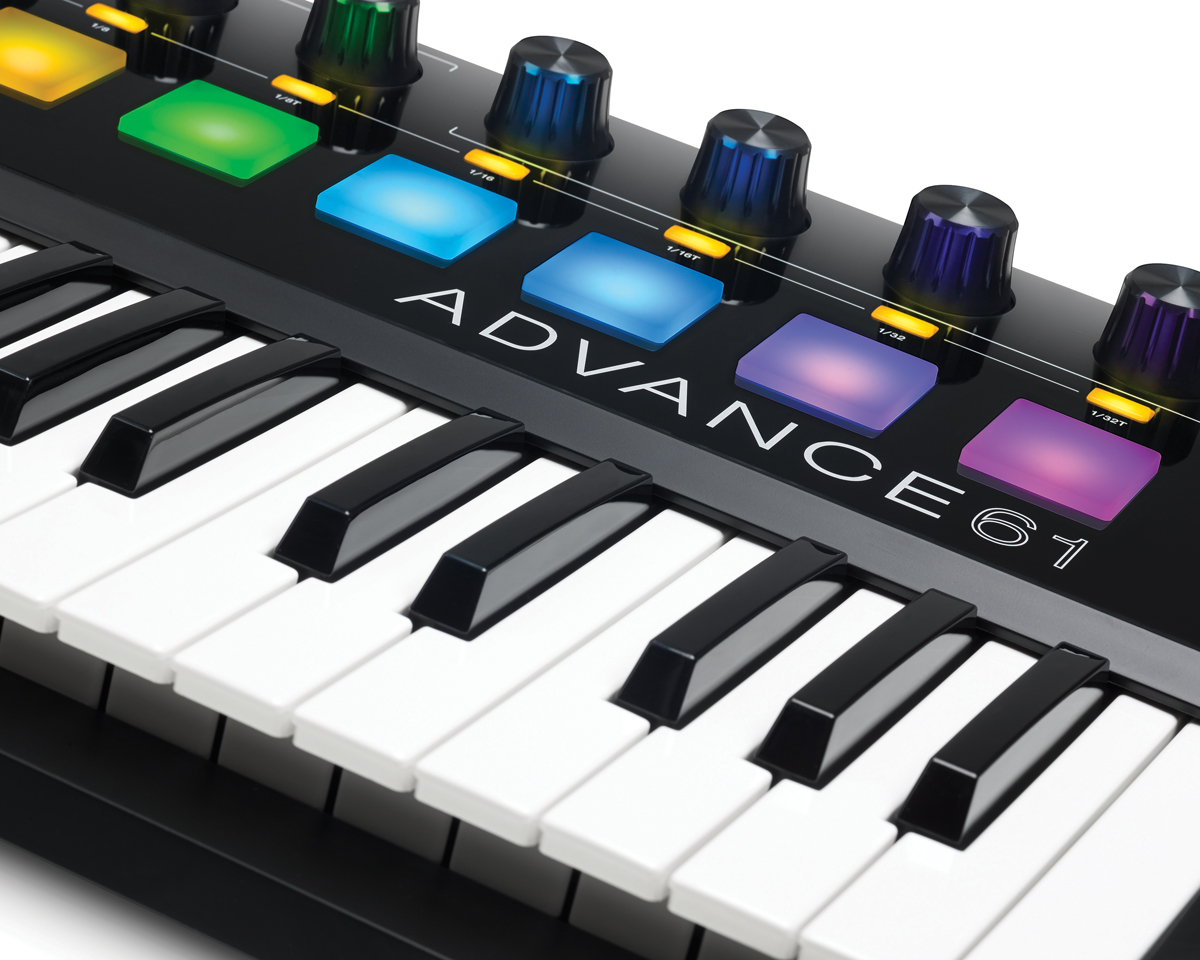 Andy Jones continues his review of the Akai Advance Series, let’s have a look at a top down overview of the 49…

1: The Screen
The 4.3in screen is a key feature of the Advance series. It’s full colour, clear and graphically capable of showing pretty much everything on your computer screen including the GUI (or part of) the instrument you select.

2: Rotaries
These ‘endless’ rotaries are among the most striking feature on the Advance range and stood out at our demo at Real World. They’re big, cool and you wonder why all rotaries can’t be this way.

3: Pads
These multi-coloured, pressure and velocity sensitive pads are ‘MPC-style’ controls that perform everything from muting multi-tracks to triggering whatever you want…

4: Standard Controls
Pitch and mod wheels are ‘rubberised’ – the mod wheel feels particularly good. Under you also get octave and arpeggiator controls (not as fully featured as those on Komplete Kontrol) and main DAW transport buttons

5: Keyboard
The keyboard is semi-weighted and velocity sensitive. It feels like a cut above a standard MIDI controller keyboard, perhaps a little heavier. It’s not a ‘proper’ weighted one but is certainly very playable.

6: Main Rotary and Cursors
These multi-coloured, pressure and velocity sensitive pads are the main controls you need to navigate around the screen. The single rotary might be smaller than the main eight but you can also press it.

All in One
Now I do get a little over excited about stuff that works, because I usually expect it not to, but VIP really does work from the off with your VI library so, initially, I was hyper excited. Your virtual instruments are there waiting for you.

Sure, you may need to re-select the odd one (Blue 2 in my case) and scan them but once they’re in, they’re in. Hit Browser and they’re listed. Select one via the keyboard or via your DAW, load a preset and the plug-in appears.

There are several modes within the hardware and software that you should become familiar with. Main Mode displays all presets for all instruments; Setup Mode is used to set up the keyboard to control your DAW; Browser Mode is where you select instruments and presets; Global Mode enables you to change global settings; Control Mode enables you to change what hardware controls operate which functions. And finally the Control, MIDI and MIDI Edit modes enable you to get deep down and dirty with MIDI parameters.

In general use you’ll find that Main and Browser Modes are where you’ll be most of the time, and there are two extra Multi Modes that we’ll come to after we look at how the Advance range deals with preset sounds.

Sound Control
With the hardware, you select presets via your selected plug-in as you would normally by dialling and pressing the main rotary on the keyboard. Or, better still, select them by type. Here you get multiple options to home in on sounds: and you can do this by instrument, timbre, style or articulation. Anyone who’s familiar with FM7/8’s approach to zooming in on presets will be very much at home here. Again, do it by keyboard or computer.

The 49 on test has the same connections around the back as all the keyboards in the range including  MIDI in/out, USB, plus expression and sustain connectors.

Once you load in a preset, the eight rotaries –rather like Komplete Kontrol’s eight rotaries – are assigned to the most important or dramatic parameters of that sound (think filter, resonance, etc) so you can get hands on with the sound straight away. All great stuff and some instant hardware control.

And, interestingly, overall I quickly started using the hardware keyboard more than the computer almost straight away – especially for the main navigation, as it does become very intuitive. You will, initially anyway, want to turn back to check everything is working, and for certain tasks you might stick with the computer for a while.

For preset selection, for example, you simply see more on the computer screen so it’s slightly better to go this way for this task. And everything does take a little getting used to using only the keyboard screen but, in time, I did find myself using it more and the computer’s screen less.

One point to note is that when using Kontakt instruments you’ll have to load in a ‘Plugin Map’ associated with whatever instrument you’re using – but all of these should have been mapped out for you by the Akai programmers. In practice this means you load up Kontakt within VIP and then go to the File menu to Import Plugin Map For Kontakt, then simply select from the Kontakt instruments there – easy. 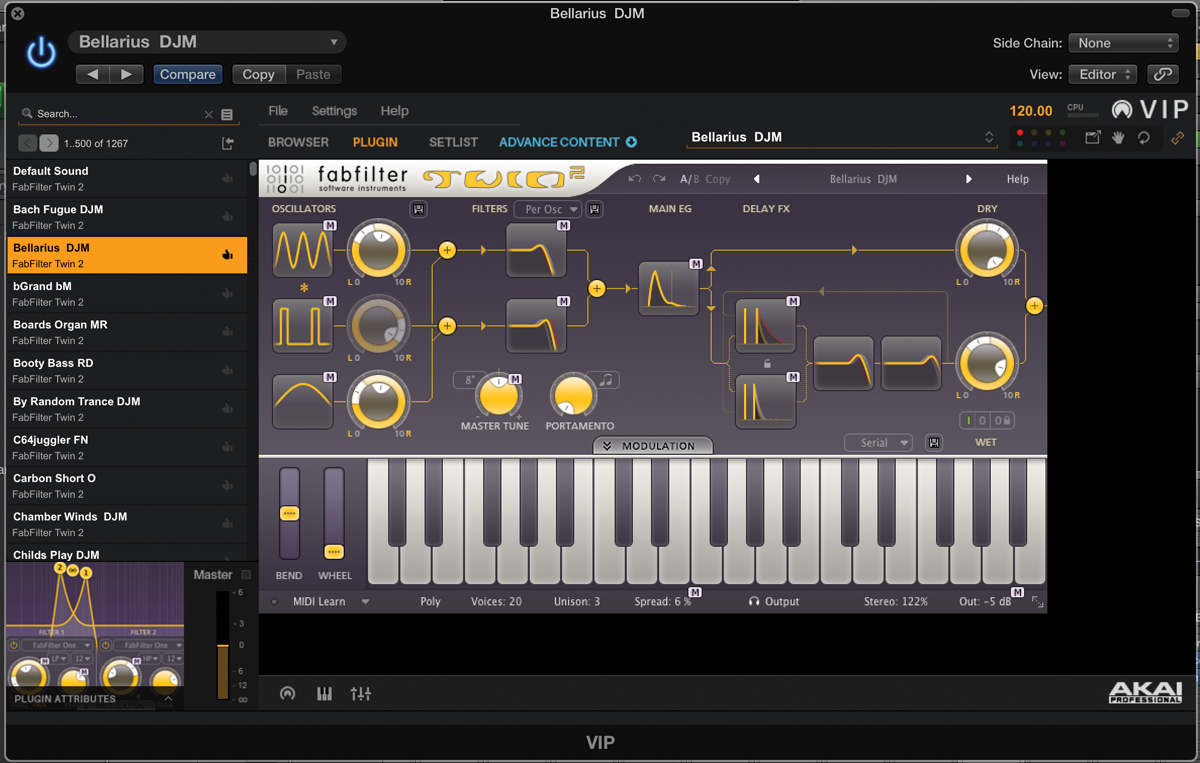 (Above) The VIP software in full flow showing MusicTech favourite Fabfilter Twin loaded up with the preset Bellarius DJM. (Below) The same preset on the screen of the Advance 49 (note the graphical representation of the Fabfilter synth is also shown) 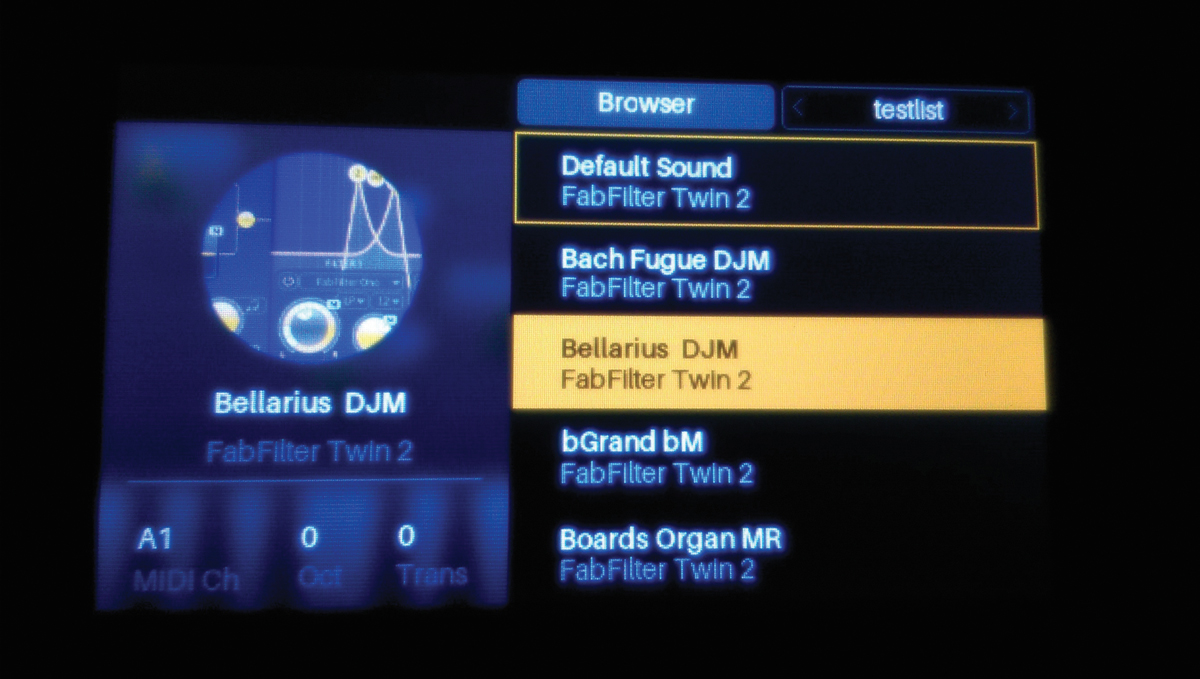 Multi Setups
Another great feature of VIP is the ability to run everything you do as a big multi setup. That is, you can layer eight sounds together (from the same or different virtual instrument in your library) or have them triggered by different MIDI channels. And, importantly, you can do this from just one DAW track or VIP instance within your DAW. Suddenly VIP becomes a multi-sound module all within the safe environs of your sequencer.

Where preset selection might have been easier on the computer screen, I found the task of setting Multis up easier to complete using the keyboard. Simply use the cursors to select the part you want, then select a sound.

You can use the large colourful pads (each has a different colour per multi-part) to mute a part and the smaller buttons for solo mode – very easy and you can very quickly set up massive sounds or multis triggered by different MIDI channels, just like an old hardware sound module.

While we’re here it’s also very easy to set up Setlists, where you can order presets within a list for when you need them (a live performance, for example.)
Both Multis and Setlists can be loaded and saved. Actually, when I say ‘can be’, I mean ‘should be’. I assumed that all Multis would save automatically but you need to manually do this as it’s quite easy to lose them if you don’t.

So Far so Good
So we’ve seen that the control side of things is great, as is the interaction with your current VI library. Now, to cover that extra content I mentioned earlier. Firstly, there’s the content you get free; secondly, the content that isn’t…

You get half a dozen instruments by Air Music Tech, plus Eighty Eight Ensemble by SONiVOX. We’ll look at a few of these extras: Vacuum Pro is a surprisingly versatile analogue-style synth that looks a bit Russian and sounds lush and powerful. Loom is an additive synth suited to sound design, with some standard and unusual sounds, plus a neat graphical interface. Hybrid is another ‘analogue’ but with some amazing and plentiful presets;

Some of the other extras need to be downloaded along with sample packs that also come bundled with Advance. You’ll see what you get in the Advanced Content menu where the VIP store is located. As well as the future of control, we could be looking at the future of purchasing as there’s a lot here to choose to buy, with more titles from a large number of third-party companies likely to join the party.

A quick run down of what you get for free includes the Velvet piano and Transfuser drum instrument, plus tech and deep house sound expansion packs. Some of the bundled instruments might be slightly old – as you often find with any bundles – but in truth they sound surprisingly fresh and, combined with the expansions detailed, add up to a decent amount of sounds for your money when you look at the overall asking price.

Alternatives
Where the heck do you start in terms of alternative controller keyboards? Well, pretty much anywhere. If it’s a good, solid set of cheap controllers you want that control software in an old school way then I’ve looked at both the Alesis V&Vi and Korg Taktile ranges recently and both are great, the former especially for the cash.

But Komplete Kontrol integrates far better with NI’s own software, has those incredible LightGuide keys, which help with both playing and control, and now comes bundled with 10 NI instruments worth a thousand bucks. And the technology, like Akai’s, is now able to control (or Kontrol) third-party instruments.

Advance, Advance
Overall, I’m pretty impressed with Advance. Even though we’re talking about a new generation of technology here, it seems very well thought out and works s
surprisingly well given that it is in its infancy.

Sure there are niggles as you’d expect with v1 of anything. I’d have put the Browser Button on the keyboard at the top to match its far left position in the VIP software (very minor). I’d also add a more obvious route back to the top plug-in menu in the software – it’s easier on the hardware. You don’t always get a visual indication of the plug-in on the keyboard screen, or at least it’s not always instantaneous.

The plug-in front panel doesn’t adjust to the size of the VIP software window so sometimes it doesn’t fit (Blue 2, stand up again), and sometimes it looks too small (Crystal), but this is surely not Akai’s fault.

Then I had the odd crash, but this happened with Analog Lab and if you read my review of that, it crashed in Logic and I never did get to the bottom of it, so suspect this is an Analog Lab thing, not a VIP thing.

Final Thoughts
Those few niggles aside, though, and I’m left with a great impression of both the keyboard and the VIP software. Taken on its own, Advance is a good controller. But combined with VIP it’s almost in a league of its own.

Overall the bundle offers a very successful mix and integration of both software and hardware, and one that will have you turning from your computer to your hardware and, what’s more, using your ears to mix rather than your eyes. And if ‘the tens’ are remembered for one thing in music production history, surely that would be enough in itself?