Adding further to its enviable line-up of classically inspired products, AJH pulls another couple of modules out of the bank. We slew and samples. 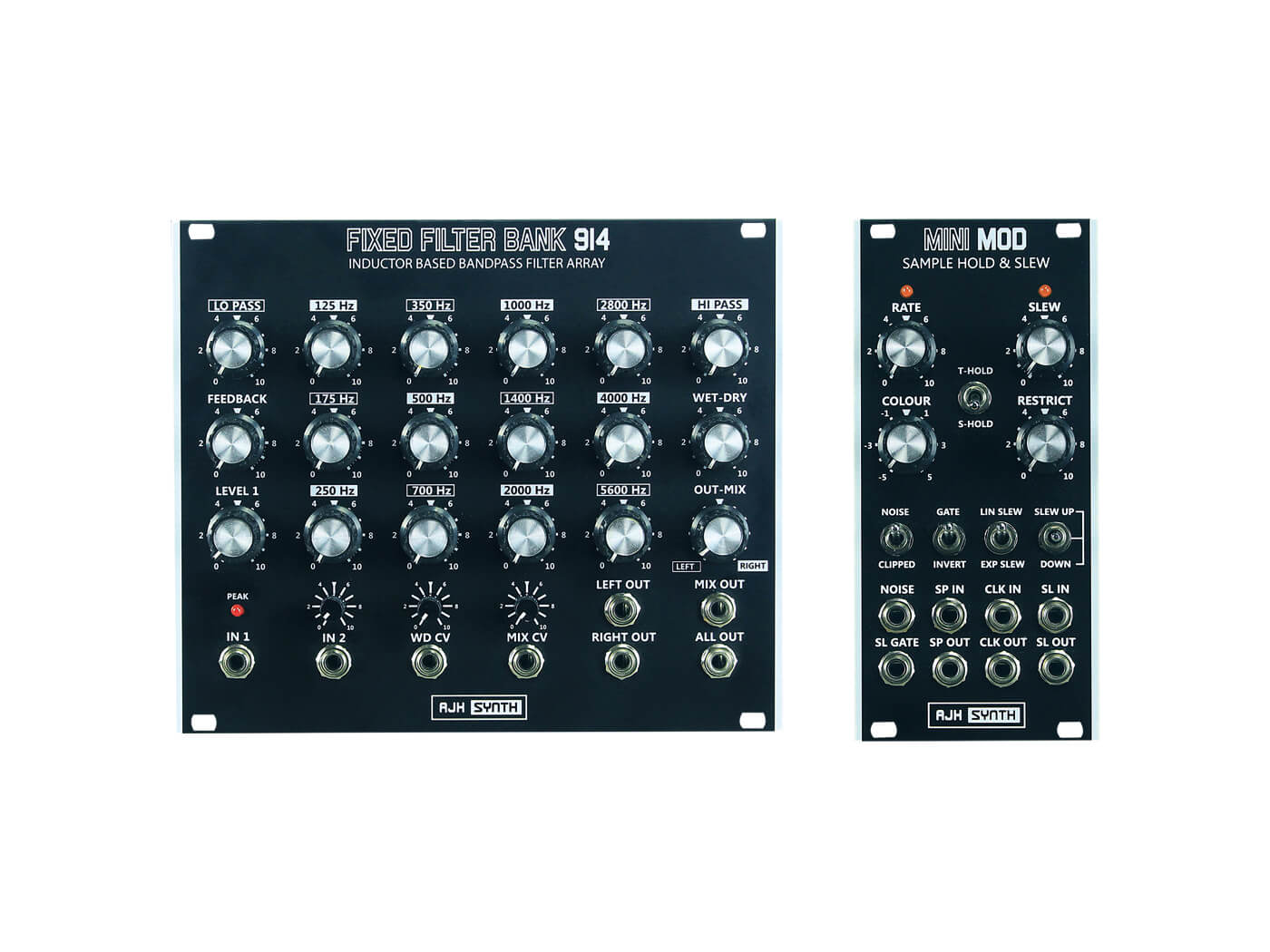 AJH Synth has something of a manifesto for drawing inspiration from some of the classic designs, and bringing them bang-up-to-date for the Eurorack age. It also has terrific form for making a number of alterations along the way, which offer both greater usability and, for the most part, a better signal-to-noise quotient.

When you remove the Fixed Filter Bank 914 from its carton, the first thing that hits you is its sheer size, shaping up at 30HP in width. This is pretty unavoidable, at least if you want to avoid the micro-pot situation that could make a module of this kind feel very cramped and fiddly. At the risk of also sounding like the proverbial stuck record, you have to marvel at the sheer quality of the AJH engineering, as all 18 of the larger-sized pots feel weapons-grade, with not even a suspicion of wobble.

Where the Filter Bank differs from more conventional low- and high-pass filters, is that it’s almost a cross between a conventional filter and an EQ. Drawing on Moog’s 900 series heritage, the FFB 914 offers 12 fixed-frequency pots, which allow the user to exaggerate specific frequencies in a signal. Under the hood, the technology employs an active inductor circuit to replicate the vintage passive design, which in real terms yields a subtle and characterful timbre which has that vintage distinction. 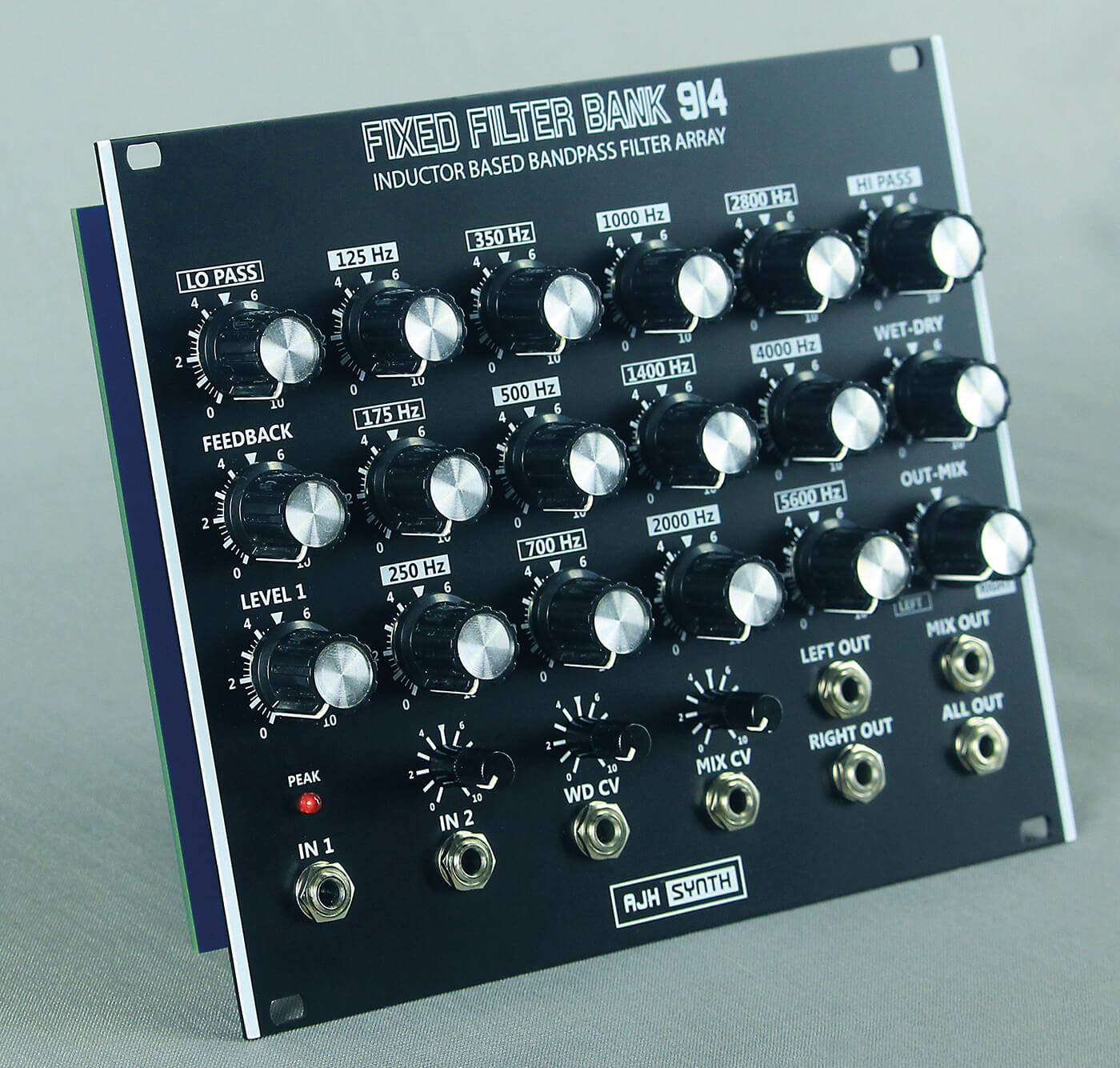 In use, the bands operate at steps between 125Hz and 5600Hz, with all of these open to application to a single signal, in series. The ability to sculpt sound here is quite endearing, as each pot subtly sharpens the specified frequency point. It’s certainly laser focused in this regard. At either end of the frequency band, there are two non-resonant filters, set to low and high pass. There’s a very slight wispiness in tonal colour to each of these, reminiscent of other AJH modules, which adds further character to the overall signal, while also offering a greater degree of control at either end of the signal sculpting.

Of course, all of these elements on their own would almost be enough to satisfy many, but
the FFB has further tricks up its sleeve. These are associated with the ability to input a second signal, with further possibilities for flexible output routing. Upon input of a second signal, both the primary and secondary elements have their own input amount control, but moreover, the FFB is essentially split into two, allowing for six-band control of each signal. This is done by skipping a band each time, so input one would use bands one, three, five and so on, with input two exploiting bands two, four, and six.

Apart from the obvious capacity to double up the use of the module itself, the two signals generated can be quite different, whether from the same fundamental, or something completely different. Even when drawn from the same signal source, it’s extraordinary how extreme the two signals can sound – and this is why there are a number of output options, controllable as a wet/dry or left/right mix.

The result of this is the possibility to create some really outstanding stereo effects, as both of these elements are open to CV control. Even with the humble use of an LFO to control either of these, the movement that appears in the sound is really deep and could be outstanding if used for movement within drones. Alongside this, the FFB offers a feedback amount, which will also induce a degree of resonance to each fixed band, which in turn introduces further colour.

The randomising of the Slew

With the beautiful sound of the FFB ringing in my ears, I turn my attention to the next new offering, the Sample Hold & Slew module. Sample and hold, or Random LFO as it is sometimes described, is something of a stalwart process for modular synthesis. Always useful for randomisation of basic elements such as filter cutoff, the AJH take on this evolves the principle further, offering greater usage options and further flexibility.

In its most basic default form, this module will generate a stepped random CV to a clock, which is generated internally, or can be clocked from an external source. There is no clock division to be found on the module itself, so if you want to clock to a specific timing value, you’ll need to do so from elsewhere in the modular. 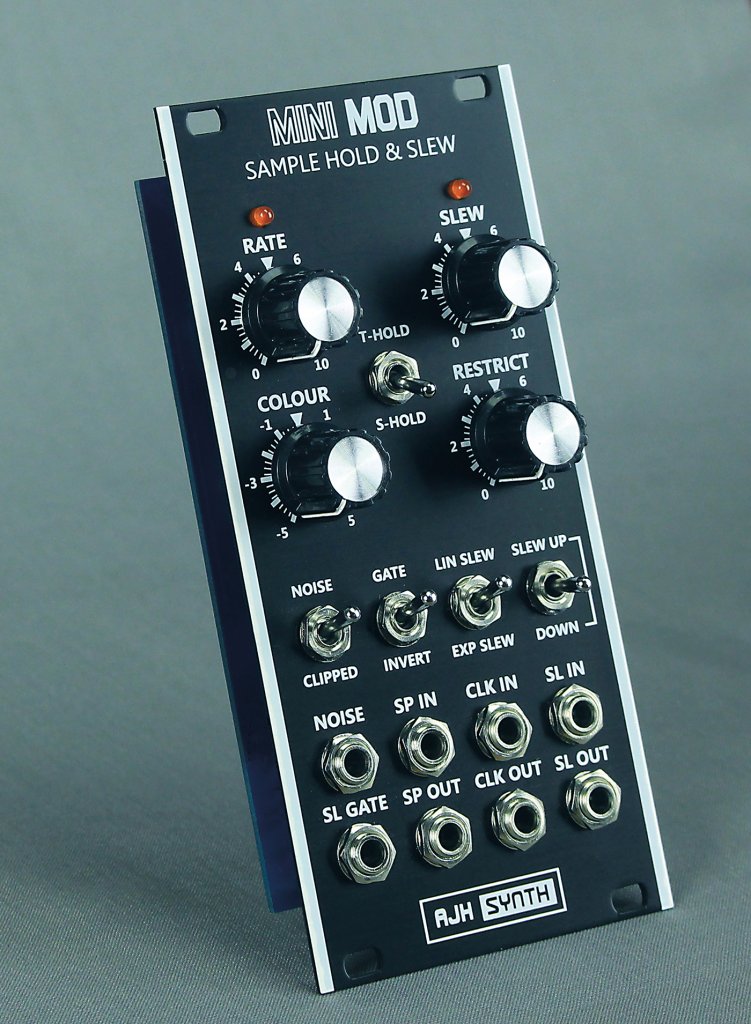 The output of the random CV is largely mirrored, with a slew-based output, where the slew time may be set, dictating the glide time between each CV. Cleverly, there is a Track and Hold option, which exhibits behaviour heard in the revered Korg MS-20, where any clock pulse below 1V induces a hold, yet any pulse above 1V will revert to normal random behaviour. This is really useful for creating sequential slides and the like, from one note to the next, but will require a degree of programming, unless you just want to leave it to the gods of randomisation again.

The clock output is useful for controlling other devices or triggering a gate, while additional extras such as a noise generator are always helpful to have on hand. Interestingly, the Noise output can be switched to a clipped format, which apparently produces higher random voltages in the sample-and-hold circuit, should you feel the need to do so. Doing this might well help when sending this random element in the direction of other third-party modules.

These two new AJH modules occupy another space in the company’s line-up, which was, until now, uncatered for. The Filter Bank is quite an exceptional module, which will have plenty of use for people who like sculpting from the ground up. Once in play, the possibilities for doing clever stereo tricks, with further CV handling from within the modular, mean that this become a major component to a subtractive setup, while the Sample Hold & Slew is one of those components which will always be useful for exploitation elsewhere.

The Filter Bank is a hefty module in size, design and build, with a considerable price tag that underlies its credentials, while the Sample Hold & Slew module takes the random concept and adds additional and useful features along the way. If you already have other AJH modules, particularly the Mini Mod system, these will play alongside very nicely indeed.

Filter Banks are not as common as they might be in modular synthesis, largely due to the predominance of filters – at least when dealing within the realms of subtractive synthesis. However, it’s a markedly different angle of approach, which can be very rewarding. Building up your timbre, rather than simply filtering out, offers plenty of creative possibilities while allowing the user to play around with the stereo field, which is often an area of Eurorack which is not exploited enough.

Alongside this, the Sample Hold & Slew module slots firmly into the AJH line-up as an untapped area, which I have personally been wanting to see for some time. The Filter Bank could be considered more of an investment, but once you feel the build quality and hear the vintage-inspired sound, you’ll certainly know why it was worth it. 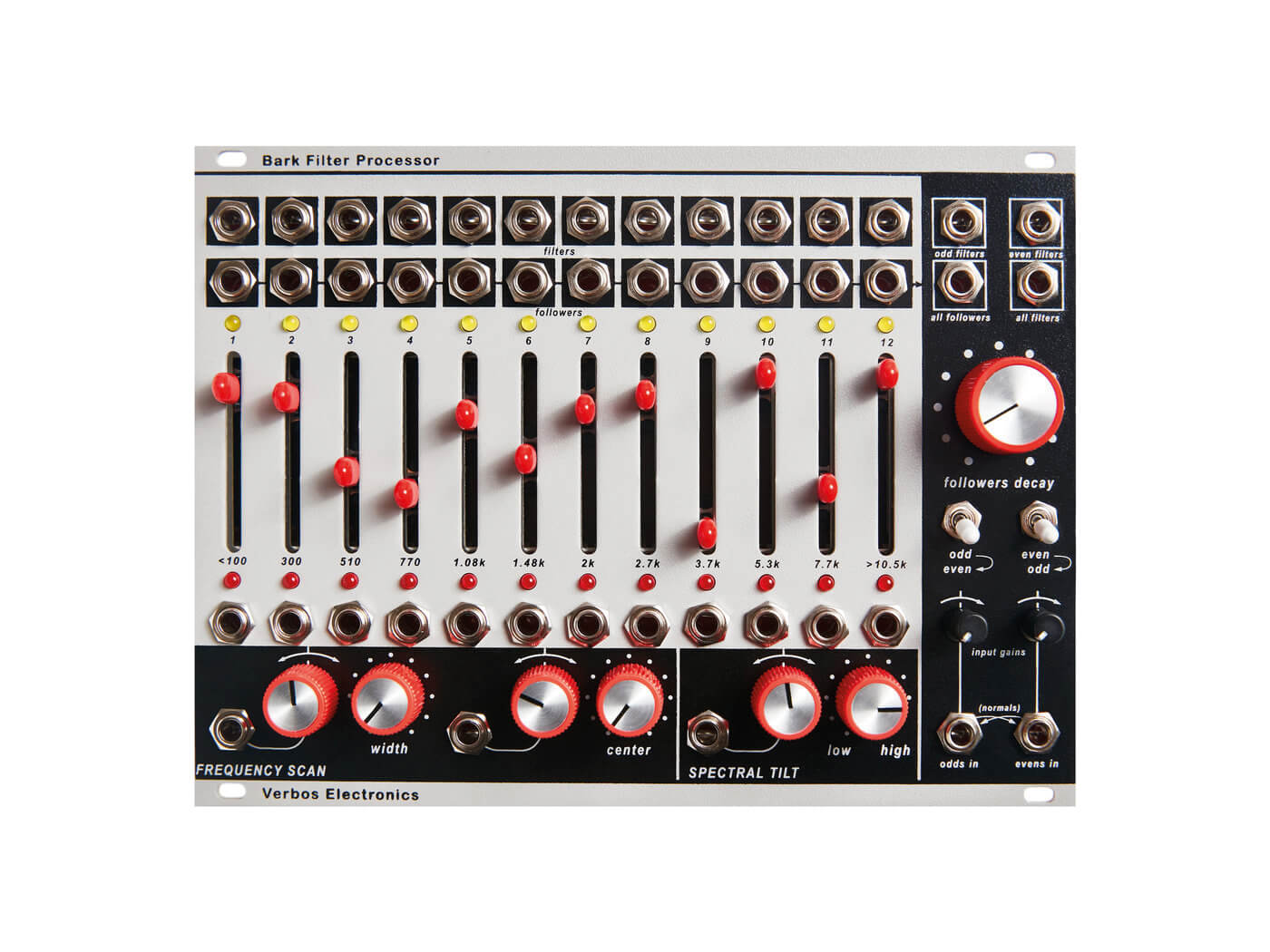 This is another example of a 12-band filter bank, but one that takes some elements further, such as CV control and envelope following. This might seem appealing, but it’s also got a price tag that reflects the extra functionality. 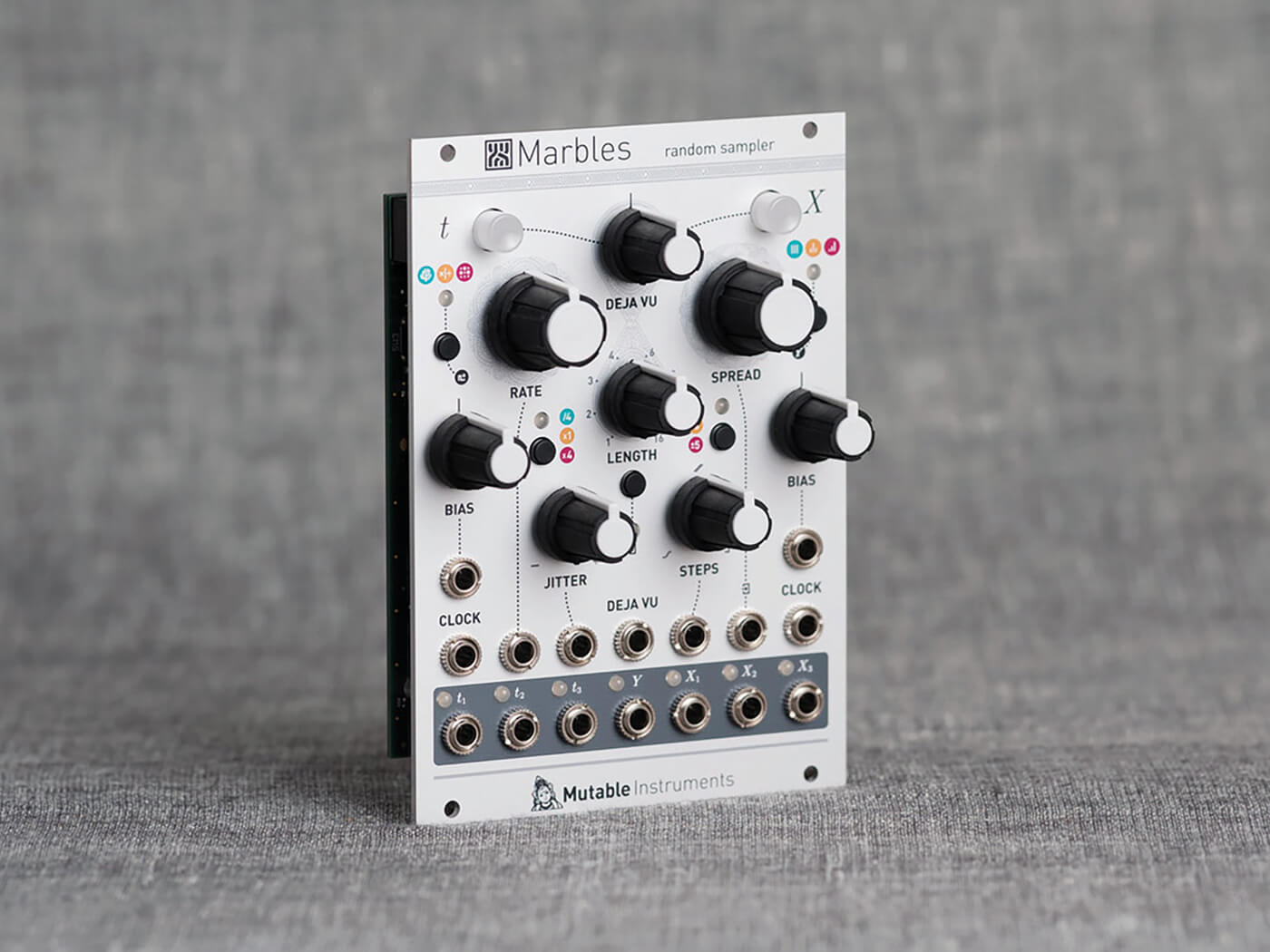 Although not strictly your usual sample-and-hold module, this versatile unit offers two sides of randomness, which are centred around CV and Gating. It’s like Mutable’s take on the Turing Machine.