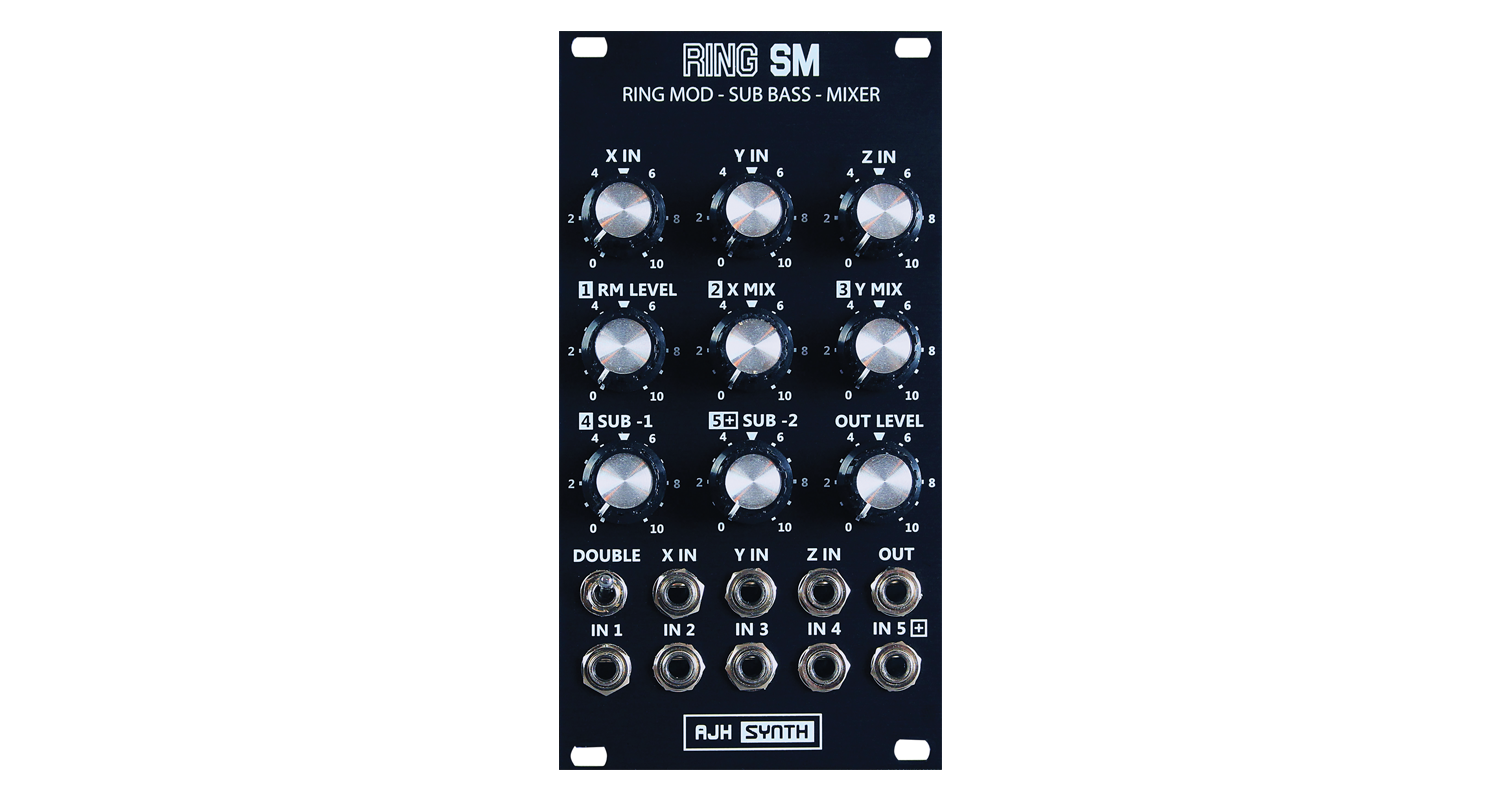 Ring mods can be the source of great sonic interest – but imagine a classic design with greater functionality. Intrigued? Dave Gale takes a closer look… 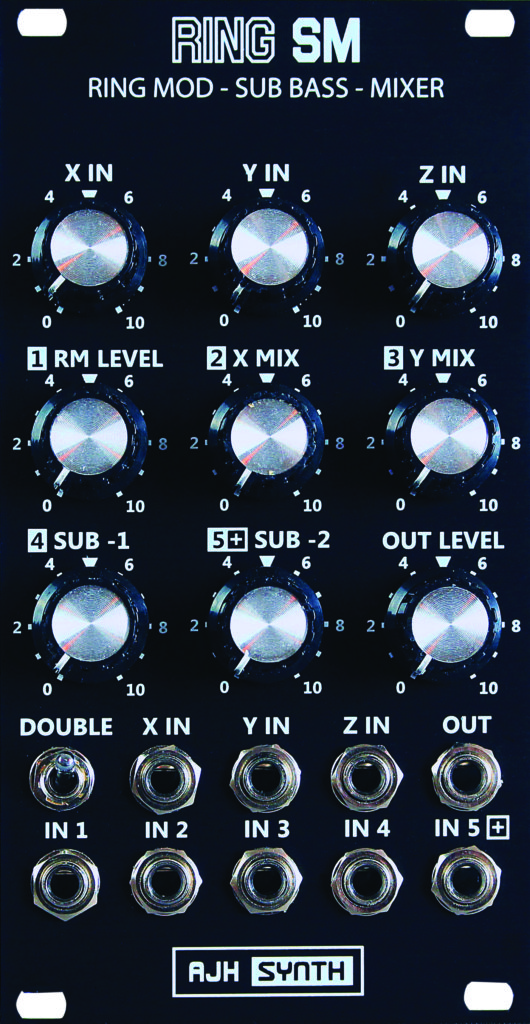 I’ll be honest, ever since I first heard the sound of the Wendy Carlos soundtrack to A Clockwork Orange, I’ve been a sucker for ring modulators. In my misguided youth, of course, I didn’t know this was what I was listening to.

When I first heard the aforementioned thunderous chimes, I had assumed it was just some sort of synth ‘thingy’ that made that noise, and of course, I have since discovered that not all ring mods are equal – in fact, good ring mods are a little thin on the ground, so when Allan Hall announced his latest module at Superbooth16 in Berlin earlier this year, I found it difficult to keep away from his demo rig.

The S&M secret
Enough of ring mods for the moment –let’s talk about what else is hidden under the hood. There’s an exceptionally useful five-channel mixer, clearly labelled in bold numbers on the front of the module, next to accompanying pots; the inputs for which are also clearly labelled at the base of the module.

This will happily accept both audio and CV signals and will sum as you would expect, to create wonderful possibilities. Inputting via one of the lower jack points will cut across the signal path to override whatever else might be occurring, within other duties such as Ring Mod. The mixer is based on the classic CP3 design, used by Moog, which will not come as a surprise to those that are familiar with AJH’s other products. It sounds beefy and glorious in audio-mixer mode, and is equally dutiful with CVs.

Well, that explains the ‘M’ in the moniker, so what of the ‘S’? That stands for ‘Sub’, and delivers a sub tone at either one or two octaves. Now, I was sceptical here, as I have always hated the lag that can come from octave dividers and the like, so I fell off my chair in amazement when I found the tracking to be incredibly fast, accurate and sonically full of body.
According to AJH, the sub will pick up within one cycle, hence there is no lag time at all, or at least not that any human can make out.

During the design phase of this module, the sub’s tonal structure was tinkered with endlessly, to get the right timbre; you will not find a run-of-the-mill square wave here. In fact, you’ll find something quite surprising – at higher frequencies, the subs are more sinusoidal, squaring up as you move lower in pitch/frequency, but where AJH have tinkered, you can unmistakably hear the definition of the fundamental, which is as clear as a bell.

If you think about this, it’s a stroke of genius, as it keeps the subharmonic overtones out of the way at higher frequencies, but makes them nice and present when you need them to be, in the lower registers. However, when you crank the Sub pot, you will also find a degree of overdrive creeps into play, still sounding sympathetic and pleasant.

I was intrigued enough to measure the frequency response of the subs against the tracking. According to my ‘not exactly laboratory’ tests, the sub performed well, down to a primary signal measurement of around 60Hz. This would place the sub-one octave at a fundamental tone of around 30Hz, which for the purposes of normal musical duties, is more than low enough.

Meanwhile, at the top end, the sub tracked to around the 1,500Hz mark, which could start to call into question the fact that it really is a sub, and not a primary oscillator. This is impressive, by all means, and immediately made me think of what a great addition to a Moog Mother-32 this would be: the Moog, with its lack of sub-oscillator, would benefit greatly from the addition of the Ring SM to the modular armoury. 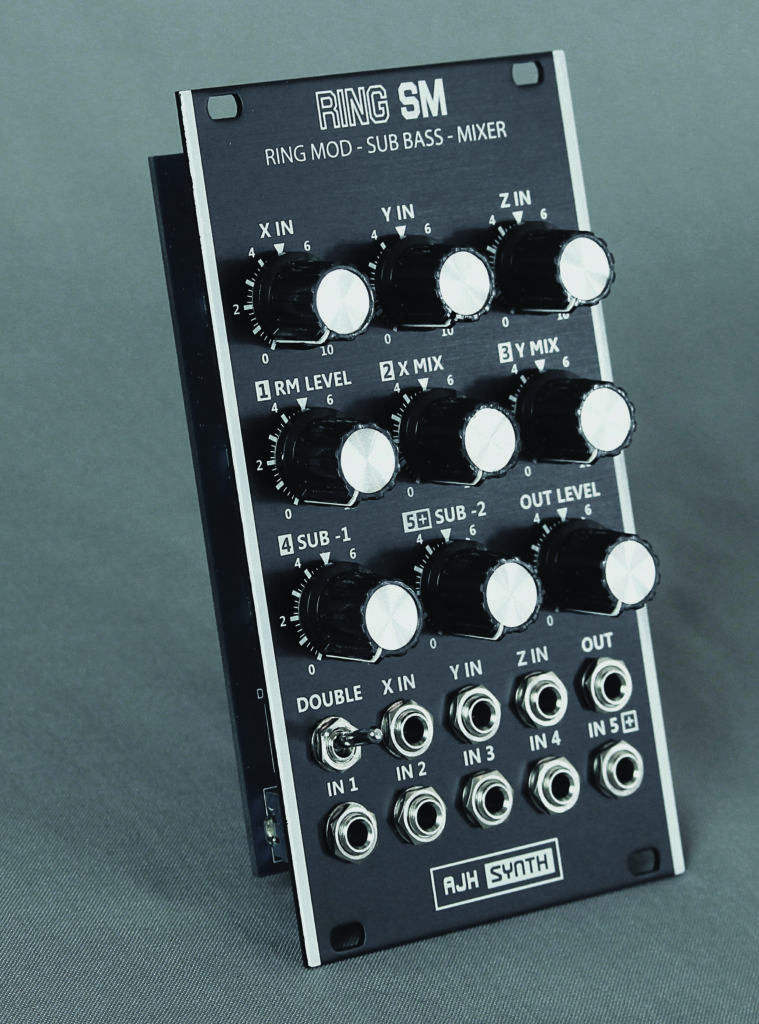 Add Z to X+Y
And so to the main event – as though there’s not been enough to rave about so far… The ring mod is based on a 1960s discrete-transistor design, but has a curious trick up its sleeve. As well as an X and Y input, there is a third, Z input, which acts in much the same way as a the Y input, but offers more resonance. This makes it perfect for taking signals from modules such as LFOs, where the result will be beats and clicks that further complement the sonic palette of the ring mod.

This aside, the ring-mod aspect of this module sounds like everything I would hope for; full of resonant harmonic overtones, and a great place to go if you want to make those metallic Carlos clangs. However, where this module really gets interesting is when you then bring the subs back into play.

Whether they are running in tune with a sequence, or behaving as drones, the ability to dial in just the right amount of fundamental is stunning. Talking of which, this module is very at home in many camps, but I found the ability to construct a mutating and pulsating drone was something I couldn’t resist, particularly as the sonic characteristics of this unit are so desirable.

In my experimentations and noodling, I used a number of tonal input sources. The AJH MiniMod VCO was an obvious choice, but I found exceptionally interesting tonal colours drawn from the likes of Mutable Instruments’ Braids and SE’s Grainy Clampit – although you should beware that the sub might start to suffer with more complex wavetable-style and noise-based colours, as it struggles to lock on to the complexity of the waveform. This is more proof, if required, of the discrete nature of the design.

If you want sub, choose a sensible waveform for your X input – and while we’re back on the subject of the X input, this can also be doubled, thanks to a nifty switch which will then send the same signal to your Y input, meaning that you can ring-modulate with a single oscillator. However, there is no doubt that multiple-oscillator inputs will yield far more complex tonal colours.

Alternatives
There is not what you might call a plentiful supply of ring mods out in the Eurorack marketplace – and be forewarned, you generally get what you pay for. Personally speaking, I want something resonant and colourful from a ring mod, and that’s not always on offer with cheaper modules.

Good contenders include the Analogue Systems RS20 (although there are good digital alternatives, such as Mutable Instruments’ Warps, which is equally multifaceted). Another option is to look at a more complex oscillator, in the digital line, that might offer FM or wavetable-style synthesis. Ring-mod tonal colours can then be obtained by stealth, as well as doubling up your oscillator availability. 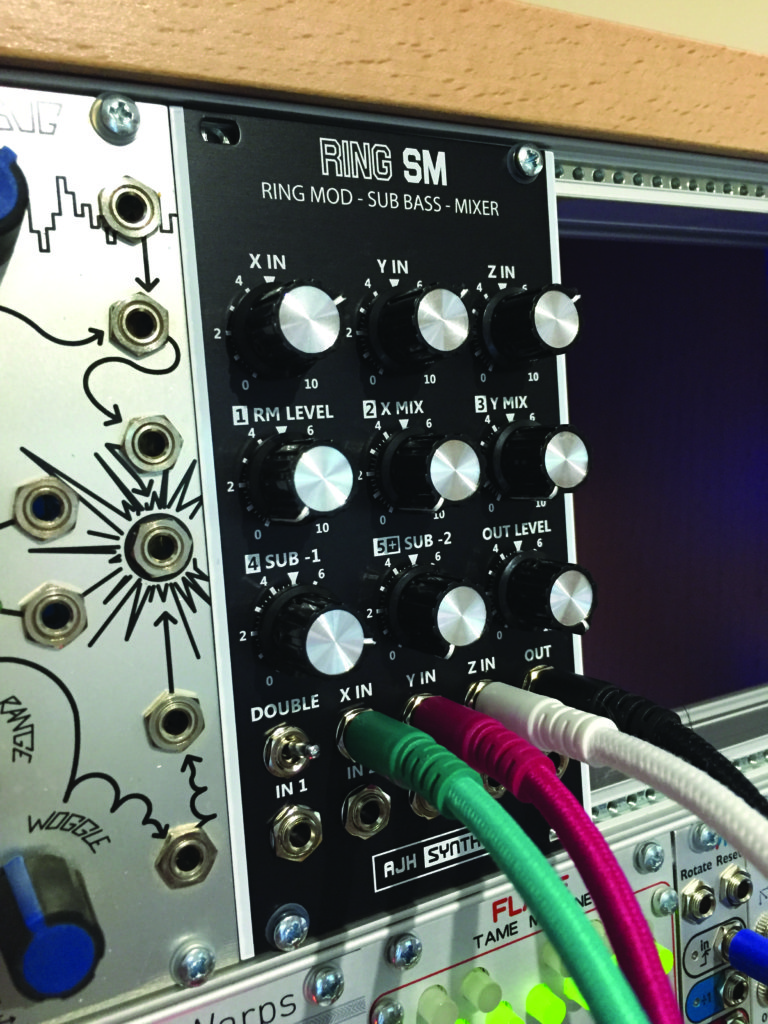 Do I really need this?
Ring mods do what they do, with a specific purpose in mind. They are not for everyone, but what they give the sound designer is another way to get tonal colours from a modular. If you like distorted colours and resonant overtones, ring mods are worth exploring, but there is no doubt that more than one oscillator will yield the best results. If you try it, and it’s not for you, sell it on and try something else. Having said that, the additional functionality of the Ring SM makes this a very useful purchase.

It’s a very high-quality mixer, too, and then there are the subs… so a multi-function module like this will always be useful in a smaller rig. If you like drones, this should be very high on your list of things to try out.

Conclusion
This ring mod is packed full of features, but it’s the basics that are simple to achieve, and the panel is pretty self explanatory, too, which is often not the case with multi-function modules. There is no doubt that as a ring modulator, the Ring SM is in the big players’ league – and when you add the tonal depths of the subs, the big foundation of sound is laid out for all to hear, and it will be glorious. As a ring mod, it’s a superb choice of module, but with the added functionally (and my word, those subs), it’s easily one of the best multi-function units I’ve come across – except this one is not a jack
of all trades, it’s a master of all