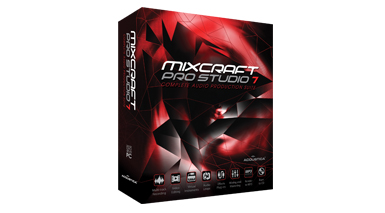 Sometimes you want all the features without the price tag. Hollin Jones finds out if Mixcraft Pro 7 is as good as it sounds… 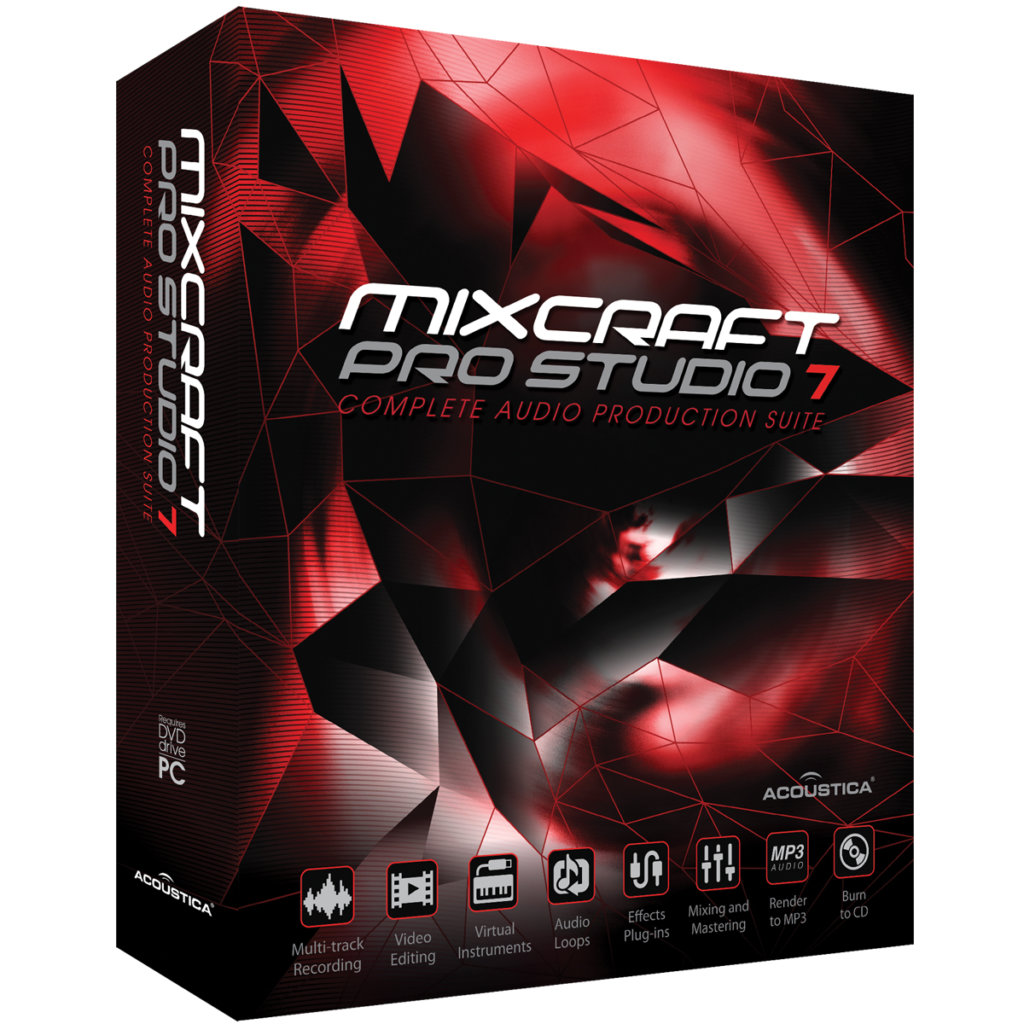 The DAW marketplace is probably more competitive that it’s ever been before with a fair few contenders jockeying for position at different price points. Occasionally your computing platform of choice also dictates what options are open to you, hence Logic’s popularity on the Mac for example.

There are more Windows-only DAWs, of which Mixcraft is one, and this has now reached version 7. It comes in two versions, both of which are competitively priced, and here we’re looking at the Pro version which still comes in at well under two hundred dollars. The regular version is under $100 and has virtually all the core functionality but fewer plug-ins.

A modest download, the app is authorised online and you can be up and running in a few minutes. Its design isn’t perhaps as slick as the big players though it’s certainly functional and doesn’t generally impede your music-making at all. It’s probably more along the lines of Tracktion or Reaper in terms of its graphical feel but this isn’t necessarily an issue since sometimes simpler can be better.

DAWs occasionally go overboard with the iconography and Mixcraft is pretty easy to navigate, which is a plus. It’s also worth noting that its system requirements are very lenient by modern standards, and it will run on versions of Windows as old as XP and needs only a 1.5GHz CPU and 1GB RAM as a bare minimum.

Although most people will be running far newer systems than that, it’s good for those with aged machines to know they’re not left completely out in the cold. It also happens to be localised in 16 languages which is likely to increase its international appeal. 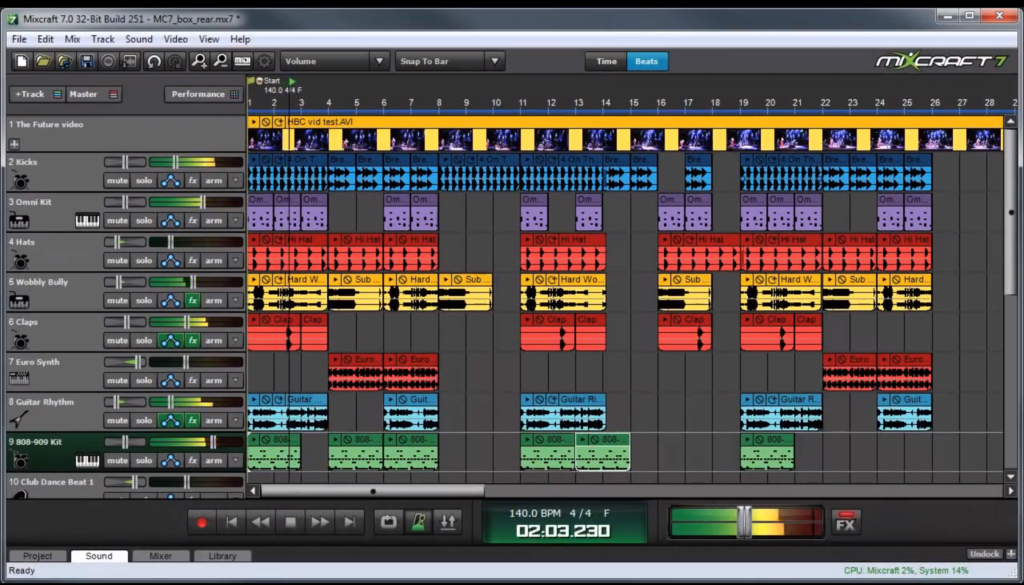 Look and Feel
The layout of the software is fairly conventional, with a tracklist to the left, a project timeline to the right and a popup section along the bottom that can show project information, a MIDI or audio editor section, the mixer or your audio and loop library.

The lower section can be undocked which is handy if you have a second screen for getting a better overview of the entirety of a project. You get unlimited audio and MIDI tracks in both versions of the software and it comes in 32 and 64-bit versions, with the 64-bit version also able to host 32-bit plug-ins. VST 2.4 effects and instruments are supported with delay compensation and this includes MIDI effects like arpeggiators.

Acidized WAV files and GarageBand AIF loops can be imported and you get over 7000 loops, effects and samples with both versions.

Audio and MIDI can be recorded and edited easily and there’s hitpoint-based audio warping as well as the ability to drag samples from a project into one of the bundled sample plug-ins with slicing so you can create your own playable instruments quickly and easily. Audio quantizing and time and pitch stretching are also available and it’s all well implemented and not difficult to figure out.

Automation for any track is easily accessible as well and there’s a clever Performance mode where you can drag loops and clips into a grid where they will sync and can be triggered from a MIDI control surface such as the natively-supported Novation LaunchPad. 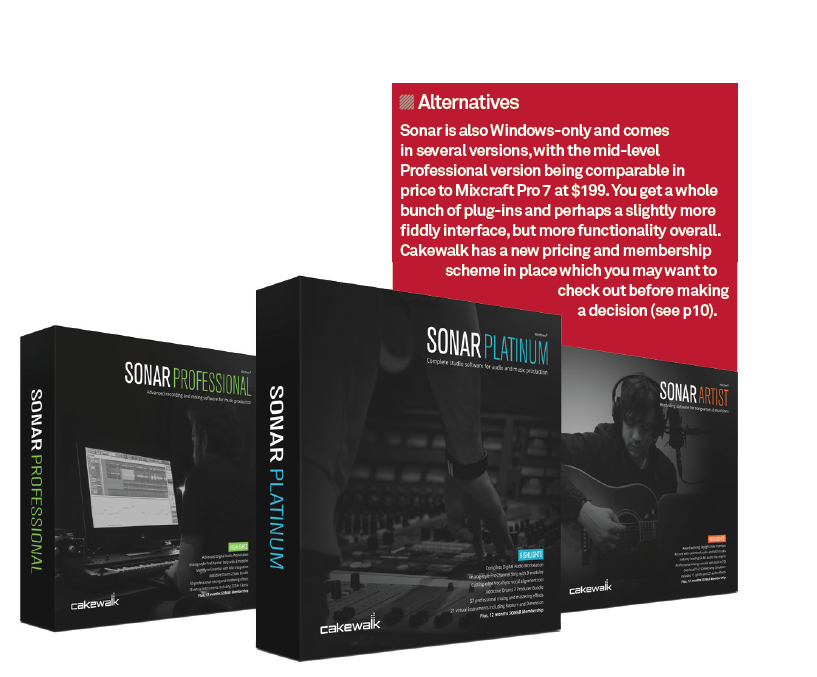 Synths and Sounds
The bundled plug-ins are good and cover a wide range of dynamic and creative effects as well as classic synths, strings, pianos and beats. The Pro version has quite a lot more including tape emulators and mastering plug-ins, and a direct comparison is available online.

Accessing and editing the plug-ins could be made a little simpler as, at present, it requires a fair few clicks to get to an actual interface, but this is a minor quibble.

The mixer is fairly conventional but provides access to all the controls you need to mix your tracks and has some useful tools available via a right click contextual menu.

The software has a few extra tricks up its sleeve that you might not expect from such a cost-conscious package. Musical notation is supported for writing and printing sheet music and there’s support not only for digital video playback inside a project but also transitions, effects, titling and editing.

It’s not perhaps the ‘pro’ video editor it’s billed to be but still far in advance of the basic video functionality in most higher-priced DAWs. Being able to cut and process video inside your DAW while scoring or editing sound is a huge bonus, and saves you having to buy a separate application and spend ages rendering. MIDI controllers can be assigned and there’s multi format export, CD burning and ReWire hosting and a free remote app for Android and iOS among other things.

Mixcraft is a surprisingly advanced DAW at a very attractive price. It’s straightforward to use and even if it may lack a little visual sophistication, it has the features and functionality where it matters. 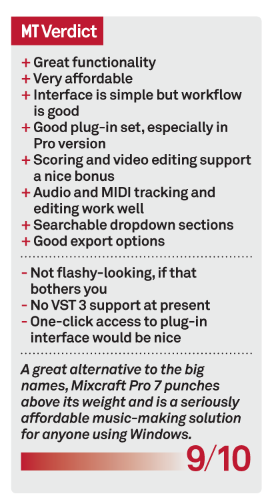