Waves’ latest offering, Abbey Road Reverb Plates, focuses on a true classic of vintage reverb. In our latest review Mark Cousins enjoys a helping of diffuse, warm reverb, handed to him on a plate… 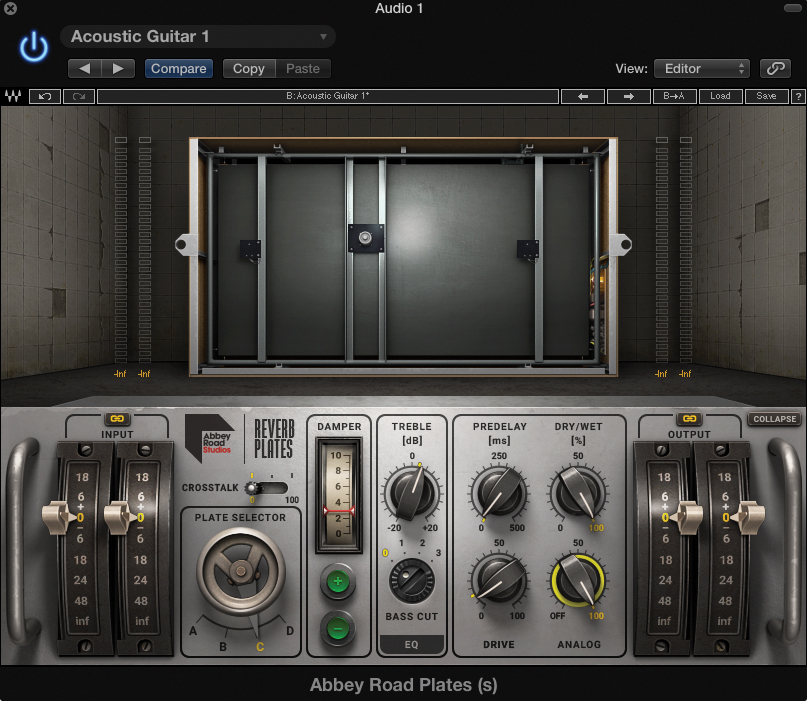 Long before the rise of digital reverb, ingenious audio engineers used a variety of electromechanical means to create artificial ambience in their recordings – from primitive spring-based units, to dedicated reverb chambers with a speaker and microphone at either end of a tiled room.

Arguably the most well-respected ‘vintage reverb’ is the plate reverb, as exemplified with the classic EMT 140, which used a large suspended metal plate as a means of producing its unique form of artificial ambience.

Plate reverbs were renowned for their sumptuously smooth sound, devoid of the spring reverb’s characteristic ‘boing’ and without the somewhat brittle edge of a digital reverb.

Although it’s likely that you’ll find plate-like settings on your existing software reverb, or indeed, an impulse response sourced from an original EMT unit, the number of modelled plate reverb plug-ins is relatively small, with Universal Audio’s EMT 140 arguably being the favoured choice among many professional sound engineers.

Given Waves’ close alliance with Abbey Road Studios, it makes sense that the company’s latest plug-in – Abbey Road Reverb Plates – models the four plate reverbs installed deep in the studio’s vaults. Based on the original EMT 140 reverbs, but with modifications implemented by Abbey Road’s engineers, these classic plate reverbs have been in service since the late-50s, gracing countless hit records.

The joy of plate reverb lies in the crude but effective ways you can tweak its sonic performance – from the mechanical damping system used to reduce reverb time, through to the application of EQ to change the tone of the plate. As you’d expect from Waves, the modelling is fantastic and immediately noticeable in the different tone of the four plates.

No two plates sound the same, and when you also factor in the various tweaks made by the Abbey Road engineers – including cleaner solid-state amplifiers for some of the units, and the completely valve-driven D plates – you’ll find a remarkably different colour from each of the four plates.

Alongside the choice of Plate, the other principal parameter is the Damper control, which selects one of the 11 different Damper positions. In effect, the Damper is akin to a reverb time control, moving between the shortest reverb time of around one second, up to maximum reverb time of 5.4 seconds.

What is intriguing, though, is that the precise effect of each damper positions varies radically from plate to plate, both in respect to the time of the reverb, but also its timbral content. Given these unique and varying properties, you can see why many of Abbey Road’s engineers had distinct and personal preferences for which plate they wanted to use!

At its shortest setting, Abbey Road Reverb Plates can add a small ‘wraparound’ ambience to drums, devoid of the flutter or grittiness of a digital
reverb, which can start to clutter up the mix. 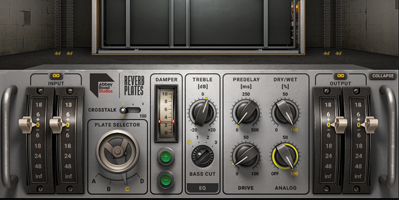 The longer settings (combined with plenty of pre delay) sound great on vocals, creating a smooth, floating reverb. Just like a real plate, the high diffusion means that longer tails can exhibit a slight ringing tone, which might not be so useful applied across a soft string pad.

Ultimately, though, it’s a case of ‘horses for courses’, which is why many engineers use three or four different contrasting types of reverb rather than just a single plug-in.

EQ’ing the plate, using the Treble control and a Bass Cut, is another great way of changing the sound – moving between a short, bright reverb, to something dark and long.

The attention to detail here is impressive, with the Bass Cut positions modelled from the EMT’s circuitry, while the 4,000Hz Treble shelf is lifted from the classic EMI console design.

Going further still, you can also adjust the amount of Drive as well as an Analog control, both of which distress the sound with vintage distortion, hiss and mains hum. For those who love the sound of a plate but not the noise, the ability to dial in the amount of degradation might even trump access to a real plate!

Visually speaking, there’s a lot to like about Abbey Road Reverb Plates, with two different interface sizes to work with. In its full size, you get to see an animation of sound waves moving across the plate’s surface, with clear metering for the input and outputs of the plug-in. Collapse the display, though, and the interface just presents the main editable controls; useful if you’re working on a laptop.

Needless to say, Abbey Road Reverb Plates captures a large part of the vibe of mixes from the 60s and 70s, so is great on anything needing a suitably retro tone – whether it’s a Fender Rhodes, twangy surf guitar, or some Mellotron flutes.

Compared to solutions based of Impulse Response files, there’s an immediate benefit with the editability of modelled plate reverb. Rather than just having a few sampled IR files covering three or so Damper positions, the combination of four different plates, multiple damper positions and various types of EQ means that Abbey Road Reverb Plates is an incredibly versatile reverb, with around 44 different ‘start points’ for your reverb tail.

Having relatively few controls means that they have a tangible effect on the sound, making the reverb feel responsive, and something you want to tweak, rather than just resorting to the presets.

The original EMT plate reverb was a Mono In/Stereo Out device, so it’s worth noting the inclusion of the Crosstalk parameter when using the Abbey Road Reverb Plates as a true stereo processor.

Crosstalk works as form of stereo-width control on the input, so if you want a more authentic stereo image, consider increasing the Crosstalk to make the input more monaural.

Arguably the most authentic plate reverb to date is Universal Audio’s EMT 140, which is fully endorsed by EMT, the German company that originally built the same plates used in Abbey Road Studios. The biggest catch with the EMT 140 is that you’ll need the appropriate UAD hardware to run the plug-in, while Abbey Road Reverb Plates, of course, runs natively.

Both plug-ins sound authentic, but it’s worth noting that the Waves version has four different plates compared to the EMT 140’s three, and that the modelled EQ and additional Drive can impart some extra subjective ‘warmth’ to the sound of Abbey Road Reverb Plates.

As long-term fans of UAD EMT 140, we have to say that we were impressed by the sound of the Abbey Road Reverb Plates plug-in. Of course, there are subjective differences between the plates themselves, as well as relative advancements in modelling technology, but in use on many applications (and especially on Plate D), we felt the Abbey Road Reverb Plates delivered a more flattering and authentic sound to that of the UAD EMT 140, which might be starting to show its age somewhat.

However, it’s worth noting that Abbey Road Reverb Plates isn’t light on CPU usage, but then we would rather have access to three or so good reverbs, rather than use multiple instances of a mediocre plug-in.

Whether you’re after an authentic 60s-sounding reverb, or a reverb that can flatter an input in a way that is impossible to achieve with conventional reverbs, then the Abbey Road Reverb Plates option is well worth closer attention.

Of course, plate reverb won’t be to everyone’s taste, although once you start to appreciate the unique tone and diffuse properties of a plate, you may find yourself turning to it on a regular basis.

Despite a wealth of reverb options in our studio, we still found ourselves being won over by the sound and charm of Abbey Road Reverb Plates. Even if you think you’ve got plate reverb covered in your setup, therefore, it’s still worth taking a closer look at Abbey Road Reverb Plates as a means of contrasting the sounds and plug-ins you already have (even if that arsenal includes a real plate!).

And if you’re missing a good plate reverb altogether, make sure you check out Abbey Road Reverb Plates, as Waves has arguably produced the most versatile and authentic-sounding plate-reverb emulation to date. 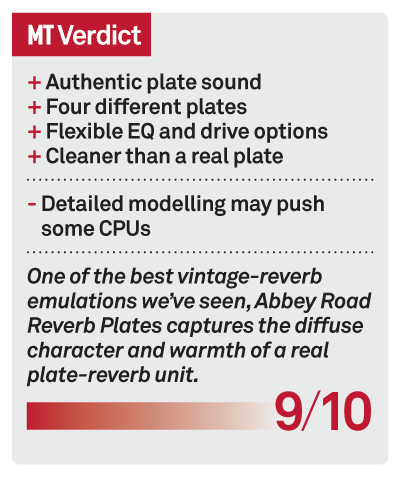