Every year someone says it’s ‘the best NAMM ever’ and this year it could well be says MusicTech’s Di Marsh. Here’s her day three report. Beware: more modular synths and a hall full of craziness… It takes maturity to realise what you are (and are not) confident at doing. I am not, for example, good […] 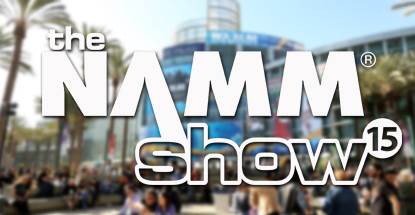 Every year someone says it’s ‘the best NAMM ever’ and this year it could well be says MusicTech’s Di Marsh. Here’s her day three report. Beware: more modular synths and a hall full of craziness…

It takes maturity to realise what you are (and are not) confident at doing. I am not, for example, good at dealing with confrontation. Nor am I particularly good at being the only sober one at a party (hence that never happening). Nor am I that good at going up the huge escalators at the NAMM show. Unless I stand on the left. But with around 20 under my belt, I do know a good NAMM show when I see one. I also know a bad one…

During the 90s the hi-tech side of NAMM was about everyone clambering to go digital and the technology/processing power simply not being able to cope. There were lots of great ideas, but they seemed to get in the way of music making rather than helping.

Even the last five years have had their dull side with seemingly everyone jumping on the iPad bandwagon trying to make it our next main music creation platform. But with NAMM 2015 we’ve turned a corner, and it’s a brilliant one. I’ll explain shortly but first, here are are my final day highlights…

First up very much a lot of people’s highlights of the show, the Teenage Engineering PO series. They are like calculators on acid. You have the PO-12 pocket drum synth, PO-14 Sub and PO-16 synth. Maybe compare them to Korg’s Volca range if you like but they are a fraction of the size and at 60 bucks (ooh listen to me, after three days in the States I’ve gone all American) they are less than half the price.

The Teenage Engineering stand was literally buzzing when I arrived, surrounded by trendy young things (with haircuts you simply couldn’t have back in my day) so these things are clearly going to do well. (But, then again, none of these bright young things would have been at Hammersmith Odeon in 1981 watching Kraftwerk play their pocket calculator.) I smile wryly to myself and move on… (It’s the small victories –  Digital Ed)

The Dave Smith Instruments Prophet-6 synth looks amazing and I’m sure it sounds that way too. I couldn’t get close to the thing except to take this picture.. 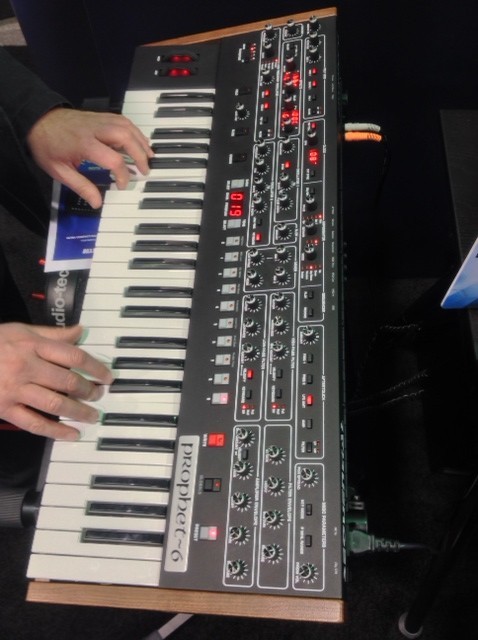 … and the guy playing it? Well, by the screeching sounds coming from it, suffice to say he wasn’t being employed by DSI (I hope). I would say we’ll bring you a review soon but never have I had such an underwhelming response to my ‘would you like me to review your synth and put said review in front of quarter of a million people?’. ‘Meh,’ was the response. Oh…. Kay… Moving swiftly on then.

Onto more worthy ground and it’s Spitfire Audio who announced not one but four new virtual instruments. I’ll detail just one as this is the most ambitious recording project I have heard in a long while. Recordist and world music lover David Fanshaw made a series of recordings of world music from around the globe in the 60s and 70s as he realised a lot of the traditional music from many countries was being eroded by modern culture. In short he wanted to capture it before it disappeared. 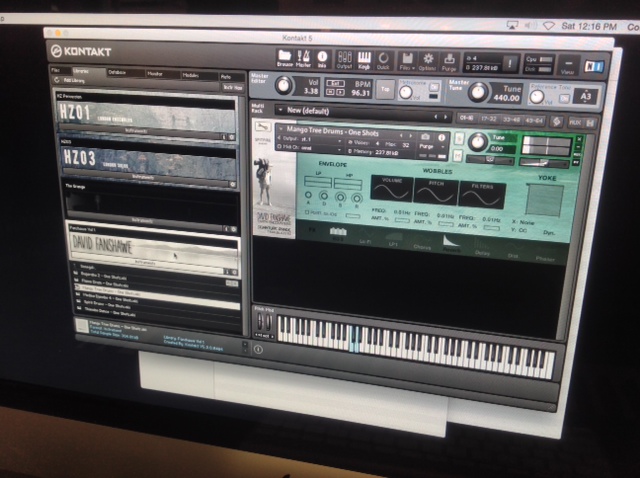 Spitfire have, along with Fanshaw’s wife, decided to try and resurrect his recordings for posterity and the first instrument is Earth Encounters Volume 1. (The first of many I suspect as he has thousands of hours of recordings.)

How do you follow that? With a controller keyboard of course! Nektar seem to the rising stars of keyboard control offering solutions to a range of DAWs that, they say, offer unrivalled integration, and from what we’ve seen that is pretty much spot on. The Impact LX series is not quite as striking as other keyboards in the company’s range but offers control over, well, pretty much everything according to the brochure.

We know Kemper’s modelling amp has been around for while and we’ve been meaning to get one in and passing the stand reminded us of how stunning it is and, with a new foot controller, we really will get this beauty reviewed soon. 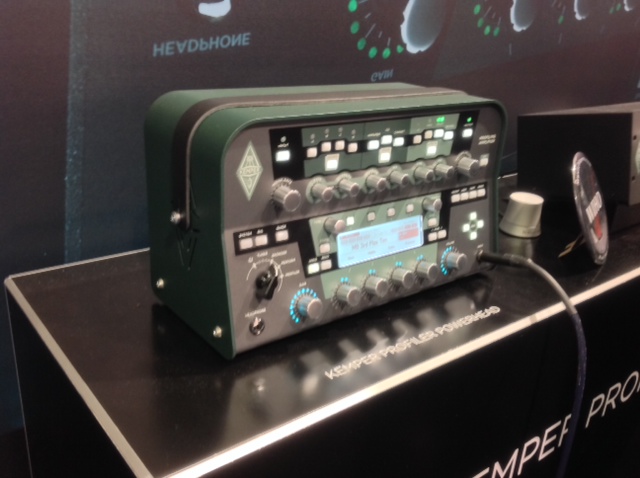 Finally in the main hall it’s Modal Electronics with a new synth called the Modulus. It looks pretty cool, analogue in nature, with an on board sequencer and is built… in Bristol? For those international readers, Bristol is a West Country city located a mere 10 miles from the MusicTech offices in Bath. 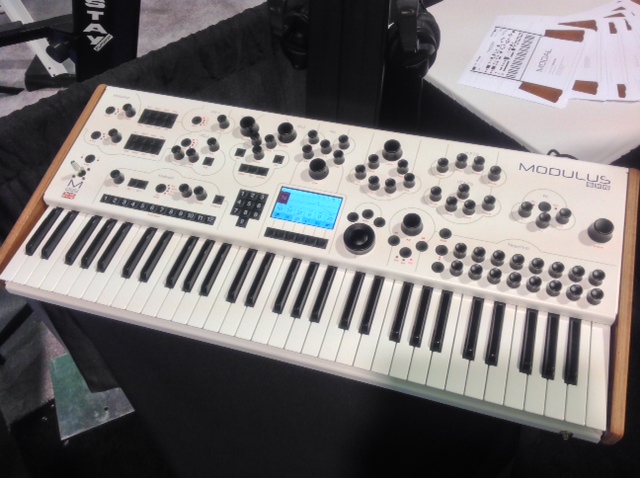 I’ve come 6000 miles to meet some people who live 10 miles away from me, and actually I didn’t even do that as no one was there to talk to. I suppose I could always shout out the window when I get back to see if we can get one in for review…

Now to the crazy hall
Hall E at NAMM. What do you say? Wander down Hall E and you can see literally anything. Over here we have panpipes, over there a Japanese traditional instrument maker literally making an instrument.

Oh look over there, it’s a bunch of hi-tech Chinese gear from a company I’ve never heard of and there, oh it’s an African bassoon maker. You never know quite what to make of Hall E so I always leave it until last. After an exhausting three days walking it will either lift you up or send you crashing down. This year, thankfully, it’s the former.

First up, the wonderfully named Tree Audio from Los Angeles. They are announcing the all new The Branch tube channel strip. Complete with big knobs, proper metre and chunky feel this could have been built in the 60s and probably sounds beautiful. It adds to the company’s The Stem 8 channel mixer and The Root console (pictured). See a pattern emerging here? What will The Twig be I wonder? 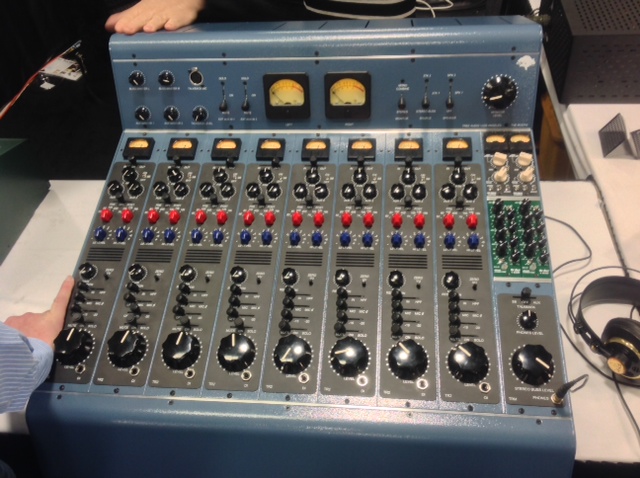 Finally, before some more random shots of modular synths, one of the most ingenious, or mad, stands. Music Computing is a company that takes standard controllers from the likes of Akai and Novation and integrates them into a keyboard chassis containing a powerful Mac or PC plus a commercially available interface.

So far so, well, ok. But they also insist that some kind of touch screen is added to control things and these range in size from small to very large, and as the company specialises in touch screens they have developed one for iOS so you can use touch to control Logic.

Probably not the first company to do it (stand up Steven Slate) but it was great to see it in action. (And you have to ask why the company that brought Touch to the masses and owns Logic haven’t done it yet.)

Finally more indulgent modular synth stuff. Slightly over from Music Computing I stumbled across an enclave of modular synth stands. Slightly geeky and very, shall we say, bespoke, I won’t pretend to know all of the companies concerned (any of them in fact), but the following pics include modular systems from dreadbox, Makenoise, Industrial Electronics, Pittsburgh Modular Synthesizers, and Lunar Experience.