Music Tech Magazine – Issue 123 is on sale now and this month we’ve got an extensive feature looking at making money from music. A variety of industry professionals are questioned about their own paths to success and we offer help and guidance for those who are hoping their own creative works will one day […] 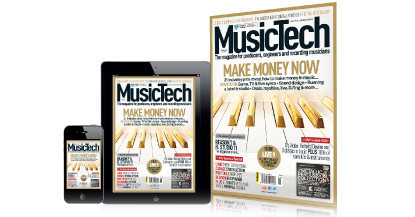 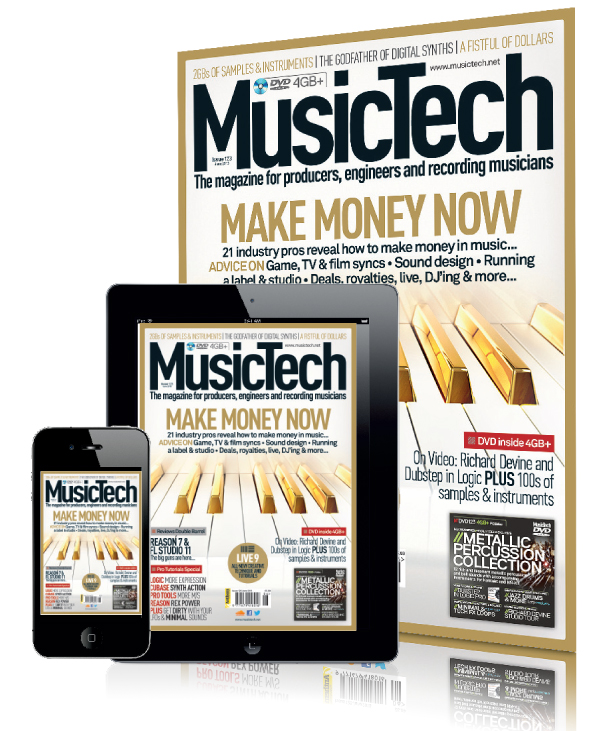 Music Tech Magazine – Issue 123 is on sale now and this month we’ve got an extensive feature looking at making money from music. A variety of industry professionals are questioned about their own paths to success and we offer help and guidance for those who are hoping their own creative works will one day come good and provide a healthy bank balance…

Any of you may already be mid-career, reading Music Tech for supplementary tuition to enhance your existing skill set. Another percentage of you will be in the romantic ‘first years’ of making music and may not have even thought about trying to generate any serious income from your wares yet. This month, therefore, we’ve decided to answer the question that many of you put to us via email, our website and in person at the various trade shows we attend throughout the year. And that question is: how do I make money?

Richard Devine started to gain recognition in the music world way back in 1995 through his debut, self-titled EP on Schematic Records. The Lipswitch LP on Warp Records in 2000 further confirmed Devine’s interest in the exploration and manipulation of sound. Fast-forward to today and that manipulation has completely taken over – in fact, he states that his job description has really been as a sound designer for the past 14 years. We catch up with Richard for a chat and a studio tour!

Check out the preview:

Creative LFO Applications
First seen in the modular synths of the 60s and 70s, the LFO has become a staple ingredient of electronic music. Rob Boffard explores their creative potential!
FL Studio 11 and Reason 7 Reviewed
This month we’ve had the world-exclusive web reviews of these two products, garnering a massive response. FL Studio 11 in particular we rate as a real game-changer. This month’s issue features the full and more in-depth versions of these hugely popular reviews, also reviewed this month is DMG Audio’s EQuilibrium and Compassion, Soundiron Acoustic and Electric Saz, Serpent Audio’s SB4001, 8DIO Steel String Strummer plus many more!
Our Ten Minute Master this month looks at Studio Connectivity, despite the dominance of digital audio these days, there will be times when we still need to move analogue audio about using some form of cable or another – a mic signal in need of preamplification, for example, or a mix signal having a buss compressor applied to it. Firming up your knowledge of connectivity will be invaluable as you set up, alter or simply improve signal flow, and there will always be sessions that require some ‘higher thinking’ as you connect legacy real instruments to your setup – we guide you through the technicalities of studio connectivity in this month’s Ten Minute Master..

Studio Icons this month looks at the legendary Helios mixing console, In 1969, Dick Swettenham was approached by Island Records’ chief Chris Blackwell – one of Olympic’s clients – to build a console for Island’s new Basing Street Studio, rightly believing that owning an Olympic-style desk would attract business. As Swettenham was an employee of Olympic Studios he couldn’t very well start building desks for rival studios, so Blackwell offered him financial support to set up his own console manufacturing company and Helios Electronics was born. Orders came flooding in, with The Beatles buying two green consoles for their Apple Studios in Savile Row, while The Rolling Stones asked Swettenham to design and supply the equipment for their mobile rig, which featured a silver Helios desk as its centrepiece – this magnificent piece of kit comes under our studio icons spotlight.

The synths in Cubase sound great right out-of-the-box, but there are plenty of ways to make them even better. Tim Hallas gets creative in this months Better Synths in Cubase Tutorial

Live 9’s latest editing and behaviour changes for automation have opened up new possibilities. Liam O’Mullane shares some of the tricks in this months’ Get Creative with Automation in Live 9 tutorial.

Having explored the intricacies of M/S bussing, it’s time to take things to the next level. Mike Hillier is your guide this month in Advanced Mid-Side Techniques in Pro Tools

Applying controller data effectively can take your virtual instrument performances to another level. Mark Cousins is in control in More Expression in Logic Tutorial

Advance features the latest news and stories from the world of music technology , this month we cover the seemingly unstoppable rise (again) of the analogue synth!

Add some tinkles and clangs to your tracks with our exclusive pack of metallic percussion sounds or glitch-out with some tech FX loops, beats and synth samples. Plus: Logic tutorials, the latest demos and all the files for this month’s tutorials.

Although physical modelling has been around for a while now, it’s still an excellent way to create rich and complex sounds and instruments. Our main pack this month sees the sound-design experts at PinkNoise Studio exploring the endless sculpting possibilities in AAS’ Chromaphone software to create a range of metallic percussion and bell sounds. There are 12 playable instruments in total, from heavy gongs and tubular bells to glassy tinkles and toy piano sounds. Each sample has been carefully processed through UAD EQs, compressors and reverbs to give a crisp finish and the instruments have been laid-out in Kontakt and NN-XT samplers for instant playability.

Richard Devine Studio Tour
Atlanta-based musician Richard Devine is known for his heavily processed and layered approach to sound design – and on visiting his kit-filled studio it’s easy to see why: you could probably name any synth from recent years and it will pop up somewhere in a rack, on the floor or nestled between several keyboards, with appearances from Moog, Korg, Nord, Roland, Elektron and more. Devine also shows us around his modular synth setup, which includes units by Doepfer, Harvest Man, Bubble Sound, Synthesis Technology and others.
Minimal and Tech FX Loops

If you’re tired of bog-standard minimal and tech house beats, it may be time to think outside the box when it comes to drum and percussion loops. Equinox Sounds has done just that, offering a superb collection of 100 twisted grooves that can add interest and a cutting-edge sound to your beats. A range of analogue and digital synths were used to create complex, glitching percussion, pitch-bent hats and reverb-drenched reverse sounds. All files are at 125BPM and are in 24-bit/48kHz WAV and Apple Loops formats for easy integration into your tracks.

Plus much more!
ISSUE 123 IS ON SALE NOW! CLICK HERE TO BUY!